Young artists Pablo Sánchez and Priscila Rivera talk about the huge mural depicting the second coming that they painted, where they found the inspiration for the Pop Art style they used, and the reactions of passersby to the scene.

Question: In June you helped create a mural on a busy street in Ensenada, Baja California, Mexico. The street art you created was unusual: a giant mural depicting the second coming of Jesus. Why did you and your fellow artists choose to paint this theme?

Pablo: I think that street art is more common than we imagine; but the subject that we chose to depict is not. And that is precisely why we wanted to work on this project – one does not always have the opportunity to share this theme that is part of our worldview as Adventists. We saw this opportunity and took advantage of it.

Priscila: We wanted to present a message of hope that also reflected the essence of Adventism.

Who asked you to paint the mural? Who owns the wall it was painted on?

Priscila: Luis King, an Adventist brother from Ensenada, asked us to paint the mural. The wall belongs to his daughter (as a part of her house); she previously rented it for commercial advertisements. However, they both decided they wanted to show something with spiritual relevance and transcendence, including in the mural the contact of the local church.

Was the local Adventist church involved?

Priscila: The project was the joint effort of Brother Luis King, the Baja California Conference and the North Mexican Union. Later, the local church joined and collaborated with the project. Brother King chose the theme of the second coming to share our faith and hope with the community.

You are both former classmates from the visual arts program at Montemorelos University, and you painted the mural together with your former professor, Luis Medina. You have worked together on projects before. Can you tell us a little about these projects? How did you start collaborating together? Do you have similar artistic visions?

Pablo: Yes, we previously worked on other murals together, which were part of our course curriculum, as well as personal projects. We are also friends, which made it easier for us to start collaborating together. Our artistic visions are very different, but we always find common ground, where we can work without any disagreements.

Priscila: It was inevitable that we work together, as Pablo and I were the only members of the 2022 cohort of our program. In addition, Professor Luis was our director and one of our closest teachers. The funny thing is that the three of us have completely different styles, but when it comes to collaborating, we always get along easily, and generate ideas that we all agree on.

Tell me about the style of the mural. The subject matter is unusual for street art, but the style feels familiar. Where do you find inspiration?

Priscila: The style is Pop Art. It was a 20th century art movement, and today we see it frequently in signs and illustrations. It is characterized by bold colors, such as yellow, turquoise, fuchsia and orange. To inspire us for the mural, we chose a color palette that was striking, taking a range of complementary colors that we see in Pop Art, and translating them into scenarios that represent Ensenada.

Pablo: I think the only thing that makes it different is the theme – it's very rare to see murals that take a religious message as the main theme. We had many sources of inspiration, such as biblical passages, and the landscapes of the city of Ensenada; landscapes such as the coast, the sea and the hills were crucial to our inspiration for the creation of the mural.

Pablo: We spent a full week, of which five days were for painting, with an average of five to six hours per day.

Priscila: We worked as much as possible during the mornings, and for small periods of time during the afternoon, since the sun shone directly on us – and also because a mobile food business sets up every afternoon, blocking a fragment of the wall.

What materials did you use?

Pablo: The materials we used were brushes, rollers, brushes, and acrylic paints among other things.

Did you sketch it all out beforehand?

Priscila: Yes, we made several sketches before painting. We had to conceal a window that is in the middle of the wall, and we didn't want it to be conspicuous, so we created a background that would hide the window as much as possible.

What feedback did you get about the mural?

Priscila: People liked it. We were shocked that motorists actually stopped to express their appreciation for the painting, or shouted at us that we were doing a good job. There was even a pickup truck that stopped, only to have a whole family applaud us from inside.

What kind of art do you like to make yourself?

Priscila: I work with oil on canvas, and I mostly do portraits, although I also like surrealist art.

Pablo: I do a little of everything. I like drawing, monumental painting like in the murals, and traditional painting, as well as sculpture and engraving.

What is the difference between street art and graffiti?

Pablo: Street art is very broad and encompasses different techniques, including graffiti. One of the differences is that graffiti began as a form of protest and became illegal, because it was painted on places not intended for it. Today, however, the two are almost the same – street art changed the concept of illegal and transformed graffiti into a means of artistic expression.

Priscila: Street art seeks to integrate with the architecture of the place where it is done, while graffiti is about making an icon or something visually attractive. 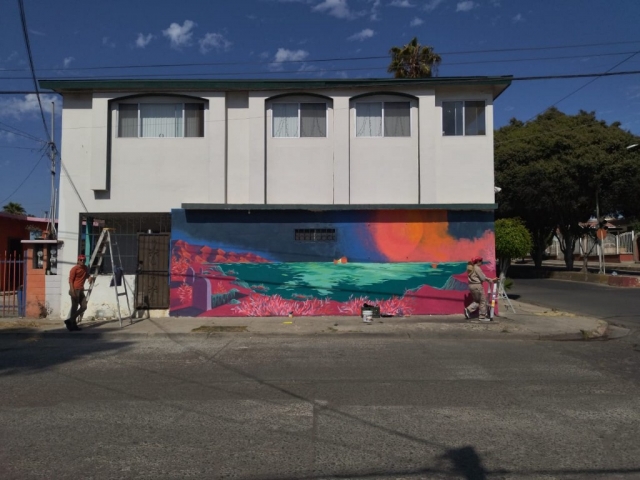 How do you think this mural is an effective witness? Do you think more churches should use street art as a witness?

Priscila: The image has key elements of our beliefs as Adventists – these can be disturbing for those who don't know their meaning. There are open graves, and a huge swirl of clouds from which angels with trumpets emerge. But at the same time, the scenery represents the landscape around Ensenada, so locals can identify with the image, while simultaneously being intrigued by it.

I think more churches should implement different ways of preaching. In this case, people are impacted without the need for words, and will continue to see this testimony day after day.

Pablo: It's definitely a very effective way to bear witness to our beliefs; many times people do not have the time to listen to a sermon, or the format bores them. But when the message is in an image, the visual impact is immediate. It is not necessary to stop for several minutes to understand it – a few seconds is more than enough for the message to reach them, or at least arouse their curiosity.

Many people asked us what the mural was about, or represented, and their reaction to the answer was always positive. Art is a completely effective way to bear witness and the churches should use it.

I would welcome another opportunity to collaborate on a mural with the church.

Pablo Sánchez and Priscila Rivera both graduated from the bachelor of visual arts program at Montemorelos University this year. Pablo now works in a graphic arts workshop, and produces personal artworks in his spare time, and plans to have a career as a full-time artist.

Priscila works at the School of Health Sciences at Montemorelos University, in clinical simulation. She works to implement art in medicine, developing didactic material for students. In her free time she paints commissioned works.

Alita Byrd is the interviews editor for Spectrum.