Stop Talking Past Each Other: New Book Promotes Better Conversation

Stop Talking Past Each Other: New Book Promotes Better Conversation 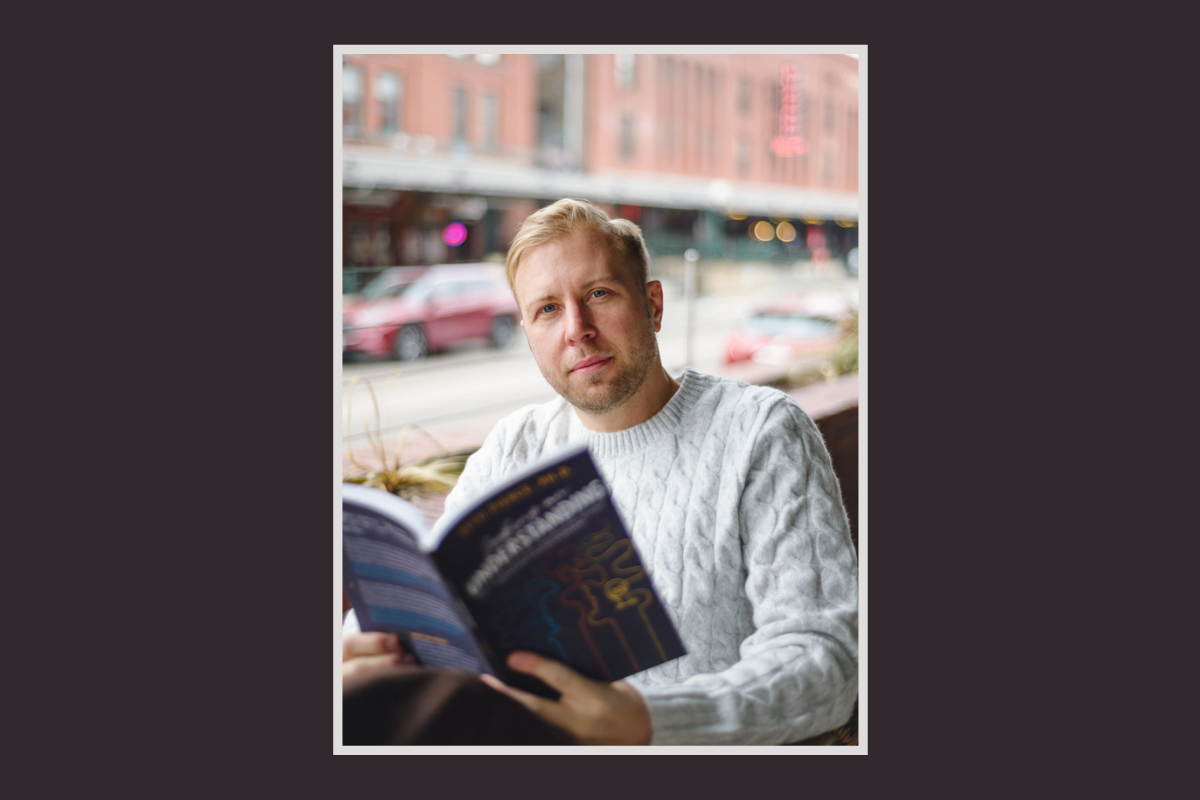 As our divides become ever more pronounced, Seth Pierce sets about trying to help correct the balance with a book about how to argue better, listen better, and understand each other.

Question: Your book, Seeking an Understanding: How to Have Difficult Conversations Without Destroying Your Relationships, was published in December by AdventSource. How would you describe the book?

Answer: The book is designed as a resource to help people recognize and navigate the dysfunctional communication realities that face us. It also demonstrates how to apply scripture and communication theory to real life situations in order to foster understanding and connection. It’s a starting place for people who feel overwhelmed by all the conversation taking place, particularly online.

Your book discusses political issues and current events, touching on some of the topics that dominated the news in 2020. Do you think Adventists tend to shy away from political discussions? Do you think that is a bad thing or a good thing?

I think some Adventists do and some Adventists don’t. In my experience the ones who engage the most are usually the ones telling others who disagree with them that they shouldn’t be having those discussions. It can be a bad thing if it is partisan issues being talked about at top volume, but it can be a good thing if it is bipartisan issues discussed with respect, kindness, and a willingness to listen.

Why is it important to discuss difficult issues in our churches?

Difficult issues seldom resolve themselves without understanding and intentional effort. In my crisis communication class, we have a saying: “Hoping for the best is not a plan.” That is not to say we don’t encounter issues we have no control over, but I think most people would agree that, in addition to challenging theological questions, issues like holding others accountable for their actions, putting an end to abuse, taking care of each other, working to change discriminatory policies that deny people basic rights are all worthy of our attention

Do you think Adventists should be engaged with politics?

This question comes up a lot and perhaps a better way to frame it is: “How should Adventists engage with politics?” I say this for three reasons.

The first is that whenever someone decides to worship God, they are setting up another power over/against government. Scripture is full of stories of people running afoul of local authorities and governments because of their worship practices. I discuss this in the book. Religious freedom is an important value for everyone, and especially Seventh-day Adventists in light of the Sabbath and our eschatology.

Second, as numerous articles have shown, our Adventist pioneers were involved in politics and social issues. For example, on the issue of temperance, Arthur White records Ellen White telling a gathering: “‘Shall we vote for prohibition?’ she asked. ‘Yes, to a man, everywhere,’ she replied, ‘and perhaps I shall shock some of you if I say, If necessary, vote on the Sabbath day for prohibition if you cannot at any other time.’” She also states elsewhere, “Intemperate men should not by vote of the people be placed in positions of trust.” Still in another place she writes, “If God has a work for any of His commandment-keeping people to do in regard to politics, reach the position and do the work with your arm linked in the arm of Christ.”

Now, of course, White’s writings contain several warnings about political involvement. For example, “God’s children are to separate themselves from politics, from any alliance with unbelievers. Do not take part in political strife.” And, writing against blindly voting for a given party, she says, “We cannot with safety vote for political parties; for we do not know whom we are voting for.” As with many issues we take to Scripture, we have passages that seem both for and against, which suggests we need a nuanced view instead of blanket statements. There are behaviors and attitudes associated with politics that damage one’s relationship to the faith. Researchers into Christian Nationalism, for example, find that nationalistic tendencies are high among those who profess faith but aren’t committed to it in terms of the life of the church community and daily religious practices. For many of these folks, faith functions more as a virtue signal and a political prop rather than an active personal faith.

On an interpersonal level, being totally immersed in politics can make us ungracious to those who differ from us. We deploy memes, sarcasm, and hasty generalizations to dehumanize and demonize our brothers and sisters in the faith because they are of a political persuasion. The result is suspicion, distrust, and a lack of love in the body of Christ that prevents us from carrying out our mission.

There’s a lot more to say on this, of course. I guess I would end it here by saying that if our political engagement (and our theology, for that matter) doesn’t make us more loving towards our enemies, or perceived enemies, there’s a problem.

What made you want to write the book?

As a pastor, I saw so many wonderful people engaged in unproductive or even toxic conversations, particularly online. Often people started with different definitions, sources, or knowledge bases and talked past each other. I wanted to create something that would serve as an easy access point to help people get on the same page.

Instead of proposing solutions to all our differences and the huge challenges we face, I figured we needed to seek an understanding first. Once we have an accurate picture of each other’s perspectives and how we define certain things, we are more likely to have better conversations that can lead to solutions.

Would you identify as a liberal or a conservative, politically?

I’m eclectic. I’m not a huge fan of tying myself to those labels since each carries baggage and can lead people who don’t know me to make assumptions. It also frees me to vote according to my conscience and not party lines.

How long did it take you to write Seeking an Understanding? Can you tell us a little bit about your writing process? And the publishing process?

The book actually began as a sermon series a couple of years ago. As the social, political, and ecclesiastical spheres began to erupt, I began thinking of revisiting the series and working in more material to turn it into a book.

Is this your first book?

No, this is my twelfth book. I began mostly writing for youth in the What We Believe series. I also wrote a couple works of children’s fiction before transitioning to general audiences.

What reaction have you had so far to the book?

For starters, I had several ministry leaders who I respect read it prior to publication and they all gave me wonderful and gracious endorsements. So, big thanks to Pastor Andreas Beccai, Dr. Heather Thompson Day, Pastor Rodney Osborne Jr., Pastor Mike and Pam Tucker, and Pastor Kevin Wilson. Additionally, I have been receiving text messages, emails, and social media posts letting me know how much people have appreciated the book.

Where can people buy the book?

It’s available in both paperback and Kindle versions on Amazon.com and AdventSource.org.

You were a full-time pastor before moving to Union College, your alma mater, to teach communication in 2019. Why did you make the switch? What did you like about pastoring? What do you like about teaching?

In seminary I took one of George Knight’s final Development of SDA Theology courses. This intensive summer class created a passion for research and got me thinking of doctoral programs.

Additionally, Dr. Kenneth Mulzac had encouraged me to explore PhD level work in homiletics since it was also an area of interest and skill for me. After five years of both exploring options and trying to find funding (thank you Washington Conference!), I settled on a PhD in communication with an emphasis in rhetoric which I could apply to homiletics. I also wanted to bring a social science field into discussion with my theology background which has been immensely helpful on several levels and opened a variety of doors due to the program’s training in historical, theoretical, qualitative, and quantitative research methods. For example, it is rewarding to be able to integrate my communication theory knowledge into my preaching class alongside biblical texts and exegesis.

I made the switch as I began feeling a burden to bring both my pastoral experience and training, as well as academic knowledge, to the classroom and work with young adults. It also frees up more time to do research, write, and speak (when there is not a pandemic).

My family and I had a good experience pastoring. We enjoyed the friendships and sense of community being an extended family brought. We had healthy churches, so we got to celebrate so many milestones with people and were privileged to be invited into so many sacred spaces of worship, celebration, and grief. I enjoyed preaching and organizing yearly events and ministry experiences for the congregation, and of course the friendships that we will have forever. We still consider ourselves a pastoral family.

As for teaching, I enjoy the banter with students and those moments where you share knowledge that helps them put words or frameworks to real world problems that they face. It’s also rewarding when students or graduates trust you enough to reach out and ask for help with struggles or questions about life. I also love having larger chunks of time off in the winter and summer to spend time with family and work on projects.

What other books or big projects are you working on?

I have a book based on my dissertation being published by Palgrave Macmillan later this year entitled A Theory of Spectral Rhetoric: The Word Between the Worlds. It explores how felt absence in written and oral performance affectively “haunts” audiences with the speaker/writer’s own traumas as well as their own that they bring to the speaking or reading event.

Seth Pierce is Assistant Professor of Communication at Union College in Lincoln, Nebraska. He previously pastored in Puyallup, Washington; Bellevue, Nebraska; and Wichita, Kansas. He earned his PhD from Regent University, his Master of Divinity from Andrews University and his bachelor’s degree from Union College, Nebraska.