An Adventist Story for a Wider World

An Adventist Story for a Wider World 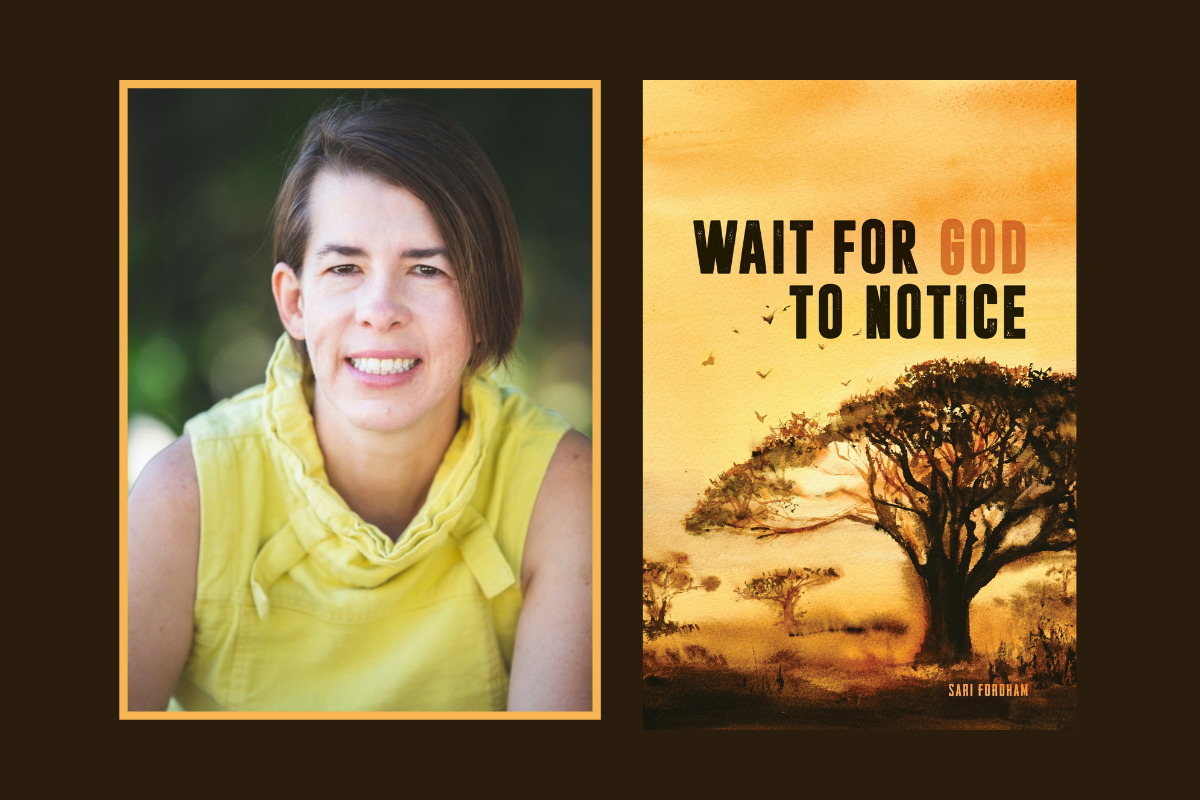 Sari Fordham, associate professor of English at La Sierra University, talks about her forthcoming memoir — a tale of growing up as a missionary’s kid in Uganda — and why it’s not your typical missionary story.

Question: You have written a memoir titled Wait for God to Notice about growing up in Uganda with your Adventist missionary parents, which is being published by Etruscan Press. What sparked the idea to write down your memories and when did you think the idea would turn into a real hold-in-your-hands book?

Answer: When I was studying creative writing at Iowa State University, my mother asked me why I didn’t write about Uganda. She had little patience for missionary books and I had little patience for family members telling me what I ought to write about. But I understood that my mother’s question was a vote of trust. She believed I could write honestly about a time she found challenging. I told her I wasn’t ready to write about Uganda yet.

My mother died a year later at the age of 59 and I felt unmoored, as one would expect when losing your mother so young. I graduated from Iowa State and landed a very wanted internship with ADRA Uganda. I was finally back in the place I loved the most. But I couldn’t stay. I saw the absence of my mother everywhere I looked.

I then bounced around with purpose, working or studying, and eventually, I visited Finland, my mother’s homeland. It was there that my aunt gave me a stack of letters my mother had written while we lived in Uganda. Her words waited in a language I couldn’t read, but I could feel the weight of them.

In the United States, poet and novelist Shana Youngdahl translated my mother’s letters into English, my father gave me another box of letters, and this memoir began to take shape.

How did you decide what stories to include in your book and which to leave out?

I first wrote down the Big Stories, the ones iconic to our family, and then, I transcribed my parents’ letters, creating a timeline of important events.

A vital ah-ha moment came when I realized the book shouldn’t be the encyclopedia entry of our time in Uganda and Kenya. Freed from a bullet point of events, I focused on moments that propelled the story forward. I was particularly interested in memories that were messy and complex and that I didn’t fully understand. The memoir gathered energy as I wrote to discover, not to transcribe.

Did you feel that you knew your parents better, and better understood the decisions they made, after writing the memoir?

Oh, for sure. I have a vivid memory of my mother reaching into a hamper and pulling clothing out of it. At the bottom, a snake eyed her and she eyed the snake. It was poisonous, of course. While I was carrying that memory, I also knew in my very bones that my mother was an overly cautious person. I came to that conclusion as a teenager and it was something I still believed when I started writing this memoir. One of my narrative questions was: Why was mom so timid? Never mind that she had flirted with soldiers when she needed to and that she was a determined voice against the patriarchy baked into Adventist structures.

I never discovered why my mother was so overly cautious, but I absolutely learned that it was the wrong question to ask. I learned that we know and don’t know our parents in equal parts. And I came to see that my mother’s anger — something she had before mom-rage was kinda cool — was a response to the narrow expectations that society had imposed on her, and perhaps some of that anger came from having a daughter who looked at her and saw a fearful person.

How do you think other Adventist missionaries’ kids will relate to your book?

Can you believe I’ve never thought about this before? Now I’m really curious. No story will encompass such a varied experience, but I hope former missionary kids will see that I came to write the truth. When I was a teen, hiding out in my dad’s study while he and my mom chatted with members after church, I would feel the falseness in some of the books I pulled off his shelf and read. The writers often used an interesting narrative to teach a pious lesson. I was a pious kid, despite the lipstick and short skirts that scandalized the churches, but I was frustrated with these books. I wanted to read something more complex.

You have said it was important to you that your story would be published by a secular press — not an Adventist publishing house. Why?

I teach these brilliant writing students at La Sierra University. The skill and depth of their poetry and prose regularly astonishes me. I just want to say, the future of literature is in excellent hands.

My memoir isn’t going to change that, of course, but I wanted to open a conversation about where Adventist stories belong.

Do you know of any similar pieces of writing — books written about the Adventist missionary experience that are not apologetics or proselytism?

I don’t. If any readers know of one, please link to it in the comments. I would love to expand my reading.

Why do you think it is rare for Adventists to be portrayed in contemporary secular literature?

Adventists are pretty insular. Adventist novels and memoirs are marketed to Adventist readers. When Adventist literature is intended for a wider audience, it usually has an evangelical angle. We’re not easy to get to know, and writers write what they know.

How long did it take you to write the book? How did you choose a publisher?

A dear friend gave a literary reading and mentioned that it had taken him 10 years to write his novel. I remember sitting in the audience and feeling startled and also certain that I wouldn’t spend 10 years writing my memoir. Haha! I spent at least that long. Of course, I wasn’t writing consistently and he hadn’t been either. Life has a way of happening. When I thought I was nearly done with the manuscript, I had a baby, which was the best thing to happen for many reasons, including artistic ones. Everything stopped and changed. For years, I worked on different, more manageable writing projects. Being away from the book helped me return with more clarity and to finally just get it done.

I submitted the manuscript to Etruscan Press and several months later, the Executive Director Phillip Brady wrote back that they loved the memoir and wanted to publish it.

You have an MA from Iowa State and an MFA from the University of Minnesota. Your stories have been published in a number of literary magazines. Some of these stories turned into chapters in your book, right? You had some fellowships and artist residencies and retreats that helped you complete this book? Is this your first book?

This is my first book and I feel really lucky to have gotten so much support while I was writing it. I don’t think I would have finished if I wasn’t consistently getting feedback that this small Adventist story resonated with a wider audience.

How long have you been teaching English at La Sierra University? Do you think you will stay in Southern California for the foreseeable future, or are you itching to move? So much of your life has been spent moving!

I’ve been teaching at La Sierra University for 14 years. It’s such a welcoming school and the English department is doing exciting things. My husband, daughter, and I live in a small house in Riverside — which we painted a shocking teal — and we’re planting trees for the future and trying to create a habitat for pollinators and birds. I’m settled. But I will admit, whenever I hear “Nullarbor Song” by Kasey Chambers, I feel a pang of wistfulness. The song is very much about Australia — where Kasey grew up Adventist (incidentally) — but it’s also about how one’s childhood landscape shapes and holds you.

Can you tell us about some of the other places you have lived?

What advice would you have for aspiring writers, especially people who might like to write a memoir?

Read a lot. Both fiction and nonfiction. Read books that do well commercially and books that are chosen for big literary prizes and books by small presses. Read writers who are experimenting with what language can accomplish. Read books that everyone tells you you’ll love. Read a few books that you’re not sure you will like.

And, of course, write. It’s helpful to take writing classes, which will give you both deadlines and an outside audience. There are a lot of community centers that offer writing classes. If you live near a university, check out its course offerings. You can also create a writing group with friends that have similar interests. Having someone read and respond to your work is invaluable for adding context, scene, setting, and more.

How can people get a copy of your new book?

Thank you for asking. It’s available for pre-order from most online venues and should be mailed out near the end of April. I love the online site Bookshop.org, which supports independent bookstores and it’s the only place right now offering a discount on my book. You can also ask for it at your local bookstore.

Read a previous interview with Sari Fordham about the university literary magazine Roadrunner.