Q & A with Calvin Rock 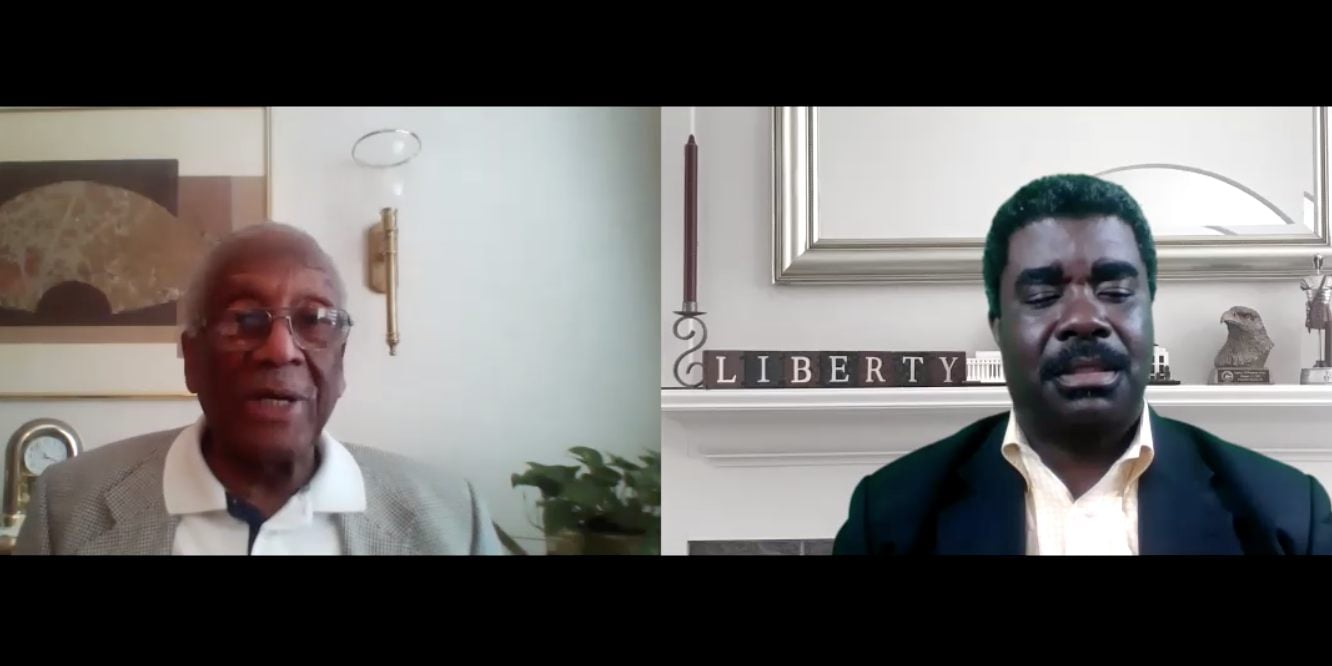 Calvin B. Rock has been a major leadership voice in the Seventh-day Adventist Church for more than six decades as a pastor, church administrator, and writer. He was president of Oakwood University from 1971 to 1985 and general vice president of the General Conference from 1985 until his retirement in 2002. He has been an active participant in North American Adventism’s continuing discussions of race relations. He holds a BA degree in Theology from Oakwood University, and MA in Sociology from the University of Detroit and DMin and PhD degrees in Religious Ethics from Vanderbilt University. He is the author of ten books, including Protest and Progress: Black Seventh-day Adventist Leadership and the Push for Parity. Rock spoke recently with Lake Region Public Affairs and Religious Liberty director/ Conscience and Justice Council chairperson, Edward Woods III. The interview was edited for clarity and length.

Question: What was it like graduating from Oakwood as a 21-year-old, then pastoring in your first district. What were you seeing at that time?

Answer: It was the most exciting time in my ministry. It was a time of change, two years before the repeal of “separate but equal” in 1954, but its aftermath continued and there was stubborn resistance.

In Florida, we pastors had to call ahead when we were traveling to a city to make sure we had a place to stay; we had to be careful where we ate; there were still colored fountains and restrooms. We still sat in the side of the restaurants, went in through the back doors. It wasn’t very pleasant in the community. But my involvement was in working with the church, and I tried to stay out of trouble. It was with caution that I approached my task.

By the time King was assassinated, I had moved to Detroit. I was there when the riots occurred in the ’60s and saw the devastation, and I was a witness to change.

You got involved in the social issues of the day, even though our denomination at large never got involved. Were there any repercussions for you with regards to that?

No, I never experienced any repercussions. I personally ran into some situations with churches and conference institutions, but I never got into any trouble about it. But you must remember that Black members, and some even now, felt that it was wrong for an Adventist and for Christians to be involved in social activism.

I mentioned in the book [Protest and Progress] that I had a lady in Detroit call me one day. She was in her 60s and said to me: ‘Pastor, would you like to hear something funny?’, and I said, ‘Sure.’ She said, ‘Well, somebody called me and said that they saw you marching down on Woodward Avenue with a group of people.’ I said, ‘Would you like to hear something funny?’ She said, ‘Yes.’ I said, ‘Well, it was I marching.’ She gasped and said, ‘Oh no, no, no. You can't do that. Pastor, you can't do that.’ I asked, ‘Why?’ She said, ‘We're not supposed to fight.’ I said, ‘I wasn't fighting. I was singing. I was praying, I was marching.’ But that's the way it was back there. Thank God, that's changed now. We see our members, White and Black, in the streets, not as many as could or should, but certainly our younger generations are doing so.

You hear from the Millennials and Generation Z, and they're always questioning why the church isn't doing more. How can the church do a better job of strengthening intergenerational leadership to social activism, in particular within the regional conferences?

We did not begin our denomination with leaders who were socially conservative as illustrated by our early leaders, Uriah Smith, James and Ellen White, and others — even John Byington, our first General Conference president who had been an abolitionist. But down the line, we somehow subscribed to “separate but equal,” which was voted in the 1890s. “Separate but equal” said that Whites and Blacks just can't worship together. So, White Adventists subscribed to that.

If you had brought Blacks into a White meeting in the 1880s and 1890s, the Whites wouldn't come back. When Blacks were to be seated, they were told they had to go to the back of the room. They would have trouble evangelizing Black people in that city. It was a terrible no-win situation.

I do not blame White brothers who were trying to evangelize for suggesting that the Blacks work for themselves. In fact, Ellen White said that. But she didn't mean for it to go on in perpetuity. It wasn't to go on forever. But that's what happened.

As “separate but equal” was overruled and overturned, our church didn't get out of the old patterns. They continued to be separatists in their programming and in their mission. The result was that the church got a bad name, particularly Black Seventh-day Adventists. People would come and say to our leaders, ‘What's wrong with you people? The Catholics open up, the Methodists open up, the Baptists open up. But look at your people — you’re segregated!’

Another thing I want to mention is that we didn't have many, and still don't have enough, minority scholars to interpret the Bible through the grid of the minorities social experience. So, the theologians who wrote in the 1890s — and more so in the ’20s, 30s, 40s and 50s — were men, mainly Caucasian men from Europe, Germany, France, or the U.S., who told us what God thought — through their eyes. They didn't read Isaiah 58 and those other Scriptures where God talks about how He hates your fast and how He refuses to honor your sacrifices, and then He talks about the Sabbath. The Sabbath comes later. But first, He’s excoriating them about their prejudices and about them holding down the weak, the poor, the widows, the orphans, and the marginalized of society. So, we had no social gospel.

It remained that way until finally we began the kinds of protests that are described in Protest and Progress. We tried to show how, at first, we wanted to be thoroughly integrated, but that didn't happen. Then we pled for Black conferences — not because we wanted to put our feet up on a desk and show ourselves as presidents, secretaries, and treasurers, but because we wanted to have indigenous leadership in our communities. We wanted to do better, getting the gospel out. We wanted to finish the work. And we knew that native leadership — people who had lived in the ghetto — could do better than some foreigner from outside.

What do you say to those that try to take shots at Black theology or liberation theology — in which you say we need the Bible to be applied correctly in its original context, whether it's from the Greek, the Hebrew, or the Aramaic — and some of the other things with which they demonize social activism or social justice?

I say, ‘fine, it's their privilege.’ But they are wrong, and the Word of God is clear. There are just too many Scriptures that support social activism in the Word of God. I mentioned a number of them in Protest and Progress: What Amos said, what Nahum said, what all of the other prophets have to say, that shows righteousness as being God's primary manifestation of Himself to the human race. I think it is necessary for our theologians to explain the Word of God as it is.

Our Black theologians need not be radical in terms of painting all Whites with the same brush. No. That is wrong. We just can’t say, ‘Everybody is bad,’ whether they are Black or White. God has good people in every ethnic, racial group who are honest and very sincere Christians. When some Black theologians try to make White people the devil, that's harmful to the cause. And when they burn up buildings and shoot people, that's wrong, and that's damaging.

What do you say to people who say the answer for all of this systemic racism is to dissolve regional conferences?

I say, ‘no.’ I would like to know why and what good that would do? I'm not sure I understand the benefit of outing regional conferences. I'm not clear. I haven't heard one except for the cosmetics. It does look bad to the uninitiated because they don't understand. They think that Black institutions are inherently racial or innately racial, but that's not true.

And we are not in a melted pot. God does not demand that all races be in the pot. He planted a flower garden. And this flower garden has many different styles and colors, and we are wrong to try to force-feed everybody into one culture of worship or lifestyle. Ellen White talks about it. She’s a prophet of the flower garden, not the melting pot.

You can watch the one-hour interview with Dr. Rock at https://bit.ly/3edOFGA or below:

The Conscience and Justice Council livestream broadcast "Rallying for Disciples: Black Lives Matter, Too" was held on Sabbath, July 18. More information on that event is available here.

The Conscience and Justice Council is comprised of Regional Conference Public Affairs and Religious Liberty (PARL) Directors, regional representatives for the North Pacific and Pacific Union Conferences of Seventh-day Adventists, and human rights and religious freedom experts in serving churches across the United States of America. The council seeks to equip and empower anyone interested in public affairs and religious liberty through the practical application of the Bible.

This interview was originally published by the Lake Union Herald, the official publication of the Lake Union Conference of Seventh-day Adventists. It is reprinted here with permission.