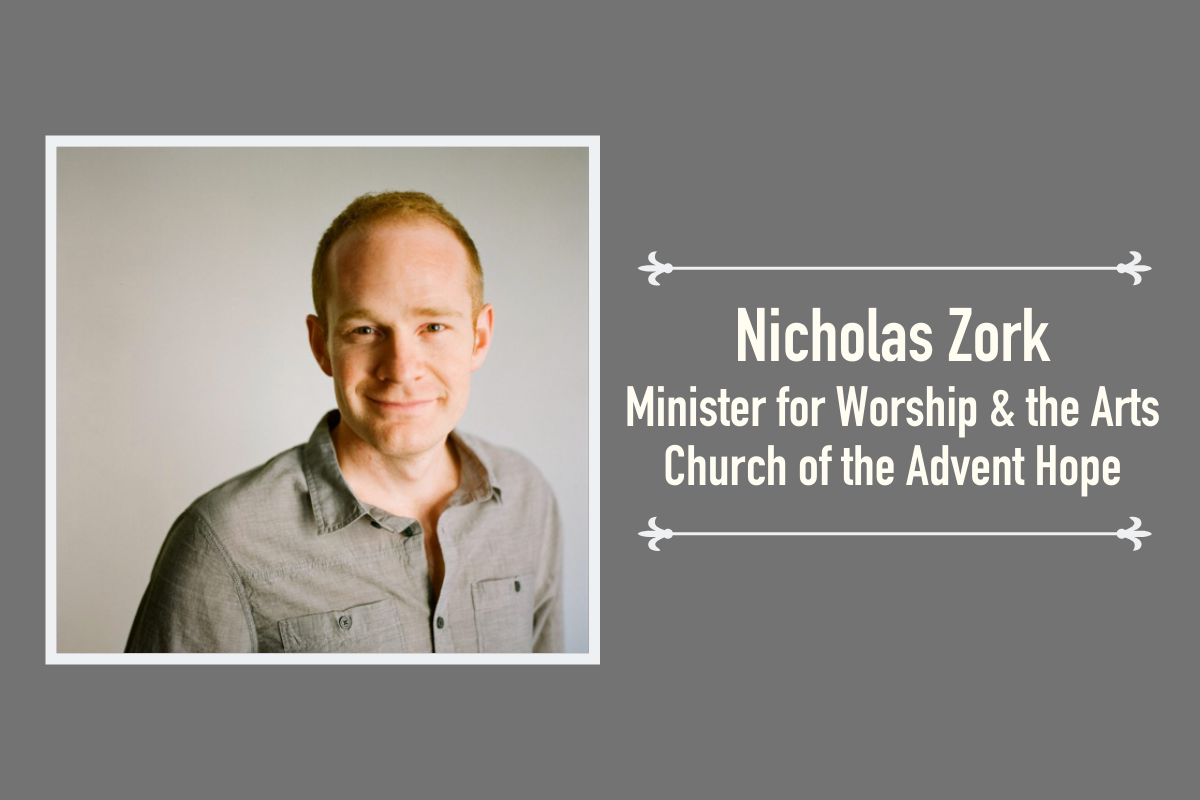 The 2020 Adventist Forum Conference on “identities: within and beyond the borders of Adventism” is happening February 21–23 at AdventHealth University in Orlando, Florida. In this interview series, we’re talking with the speakers about who they are, why identity is important, and getting a sneak peek into what they’ll be presenting at the conference.

Question: Tell our readers a little bit about yourself and what you’ll be speaking about at the Adventist Forum Conference in February.

Answer: I'm a third generation Adventist whose parents and paternal grandparents dedicated their vocational lives to church institutions and those they serve. I am also partly employed by the denomination. I serve as minister for worship and the arts at Church of the Advent Hope in Manhattan. I teach as an adjunct professor for worship and music at Andrews University. And I work as a songwriter and musical director in New York City, where I live with my family.

Being raised with an insider’s perspectives has its problems and privileges. Seeing how the ecclesial (veggie) sausage gets made has removed any doubt I might have had that the legally incorporated entity called the Seventh-day Adventist Church is — whatever its spiritual significance — a thoroughly human institution. But I have also had many opportunities to see how much good we imperfect people and organizations can do, despite the systems we set up to make it difficult.

Working as a musician has given me opportunities to see some of the worst and best ways that Adventism embodies its identities. At its worst, the social practices of Adventist music-making have propagated euro-centric and racist cultural assumptions, purporting to divinely sanction certain aesthetic preferences while denigrating a majority of the world’s musics and, thereby, people. At its best, I have seen how music can be a resource for polyvalent participation in community.

The power of music is not that we all experience it in the same way; but that we all experience it in different ways at the same time. This polyvalent potential gives musical participants an opportunity to share time and space and learn how to be together as a diverse group of people. In Orlando, I will be discussing some of the ways we can socially practice music together — in liturgical gatherings and otherwise — to cultivate inclusive communities that eschew uniformity in favor of unity.

How do the various identities that make up who you are intersect with each other? Do these identities ever create tension, and if so how?

First of all, I recognize that most of the ways my identities intersect benefit me immensely. As a cisgender, straight, white, Christian male, I have incredible unearned privileges that mitigate the negative ramifications of most tensions I experience. As a musician, the primary tension I experience is one of perception. For example, only a small percentage of my songwriting would be considered confessional, liturgical, or explicitly sacred. I write for TV, film, my solo projects, and collaboratively for other artists’ recordings. I am not just interested in what music means but also what it does — namely, does it facilitate honest conversation, authentic connection, and inclusive community?

For me, writing pop or folk songs about love, friendship, hope, doubt, and any other dimension of life is fully congruent with writing a congregational song for worship. But I know some church folks might see such things as incompatible. Still, I've experienced relatively little pushback. So I try to use my privilege in whatever small way I can to create space for other artists who also reject the sacred-secular dichotomy and the ecclesial insularity and marginalization of dissenting voices that such a false dichotomy is often used to justify.

Why is it important to discuss identities?

One important reason to discuss identities is so that we know we are not alone. Life is always difficult. But it’s manageable — and even beautiful — when we’re committed to living it honestly together in affirmation of our differences and shared humanity. Discussing varied identities can create more room at the tables where we sit for everyone to participate fully and openly as who they are.

How do you see the Adventist Church approaching issues of identity? What does it get right, and what could it do better?

The Adventist Church is obsessed with its own identity and dedicated to the idea that it is special, which negatively affects the Church’s ability to communicate the Gospel of divine love for all people and collaborate effectively to make the world a better place. The tendency for Adventists to identify strongly with the global Church can be very positive in that it encourages Adventists who are very different from one another to remain in community and conversation. As a result, Adventism can be — at its best — a big tent.

But a broad definition of what it means to be Adventist is anathema to many who feel it threatens the rigid boundaries they believe are essential to Adventist identity. The institutional Church would be wise to accept the empirical fact that there are many Adventist identities, even as it wrestles with how to embrace that fact as an ideal. I believe we can concurrently celebrate and wrestle with a plurality of Adventist identities, which share central convictions but have porous boundaries. And embracing porous boundaries would both encourage us to treat one another — especially those we’ve marginalized — more ethically and let some of the air out of our unhealthy corporate ego.

Has the Adventist church's identity changed during your lifetime and if so, how has that affected you?

The church has diversified, culturally and theologically, during my lifetime. And my perception is that this development has unsettled some of those who believe that unity and uniformity are closely related. But I am encouraged to see an increasing number of generative conversations at what some might call Adventism’s liminal, growing edges. In these liminal spaces, where identities “within and beyond the boundaries of Adventism” meet, it is readily apparent that while we (Adventists) are not nearly as important as we have claimed to be, we (human beings) are all part of something that’s much better than supposed importance; and if we are willing to dialogue, listen, and learn, we can resonate with a more polyvalent, inclusive divine song — one that invites us to be more than we are as individuals and institutions, one that invites us into true community.

For more information on the identities conference and to register, please click here.