I Talked to 10 People Who are Sick with COVID-19

I Talked to 10 People Who are Sick with COVID-19 They live in five European countries and could not be more different in age, interest, or inclination. It made no difference. They were all infected. Some were not scared. Others were terrified. They have all gone through an experience that, without exception, has marked their lives.

Timothy (34) is a divorced father. He lives in Bracknell, England, some nine miles from Windsor Castle. His main suffering in self-isolation was not so much the illness, painful as that was, but that he cannot see his daughter. “She shares the house with her grandfather on her mother’s side. The grandfather has health problems. If the virus got there, he would be in severe danger.” 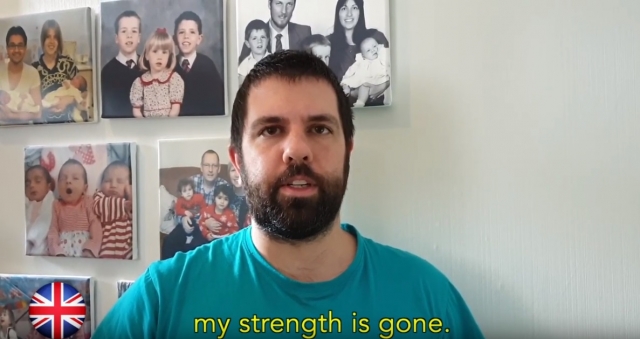 Timothy is a policeman. One of those who can't stand aside. From what he repeatedly told me, it is obvious that he is constantly tormented by the thought that he must remain isolated instead of being with his colleagues at work, engaging with everything possible to be part of the crisis response. His answer, when I asked him if and what he is praying for these days, came naturally: "That it clears with minimal casualties."

Then I talked to Tina (37). She is very attached to her creative work as an author and speaker. She is happy that she lives in Germany, especially because, since March 18, when she was found positive, she feels cared for in a “perfect” way by the German state and its neighbors. 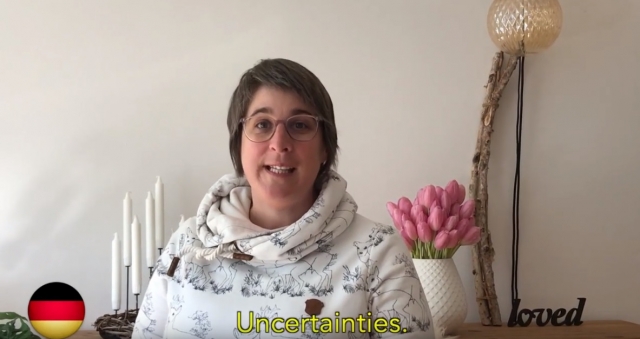 The disease did not scare her, although she says she was very ill — she had breathing problems for two weeks and felt terribly weak. But as she began to recover, a thought settled deep into her mind. So much so that she began to pray for it.  She says she would like to feel that people can remain as attentive and caring about one another even after the new coronavirus will no longer be a threat.

Pedro (46) is a mountain-sized man, normally with an exuberant energy and a heart that seems immune to aging. He lives intensely and with a deep love for his wife who he thinks is “incredible” and their two children — Adaia (19) and Johan (18). Pedro is happy that he has the opportunity to work as a pastor. 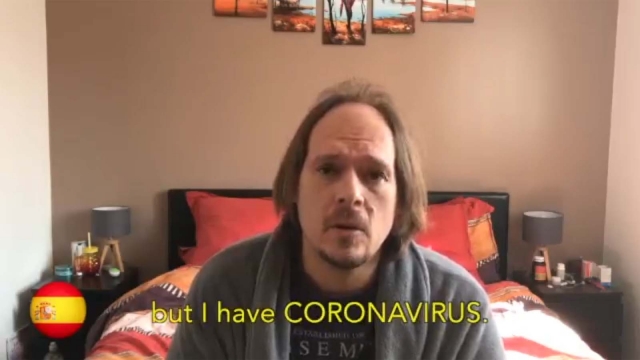 His wife was the first to get infected. She was quickly joined by Pedro, then Adaia. Johan is currently isolated in his room with no symptoms. "I thought I was dealing with a mild form of the disease but the symptoms worsened after seven days,” Pedro said.  Just as he was mentally preparing for recovery, he realized that he was deteriorating. "There were moments of serious concern, especially one night when I began to feel that I no longer had oxygen, that I could no longer breathe.” His only, desperate response was, “God, here I am, in your hands."

I tried to talk to Pedro this last weekend, but general condition did not allow it. He has lost seven kilograms. I had asked Pastor Pedro what was his priority in prayer? He wrote back, "I pray for my parents, they are 80-years-old and living alone in the south of Spain."

I also asked Adaia how this family situation has affected her life. “My relationship with God is growing,” she responded. “The way I see the Bible and the way I talk to my friends is not the same, and I think I'm growing as a person.” She adds, “God doesn't punish. He does everything with love, and he is not the author of our catastrophes."

Giusi is a lively lady — like any other Italian, some would add. Probably even a little more. At 56, a single mother with two adult children, aged 29 and 23, Giusi is a social worker and mediator. But she is also a counselor at a hospice for terminally ill cancer patients and is involved in counseling initiatives for minors, victims of domestic violence, and victims of sexual abuse. What spare time she has left is used to do translation jobs from Spanish and to write. 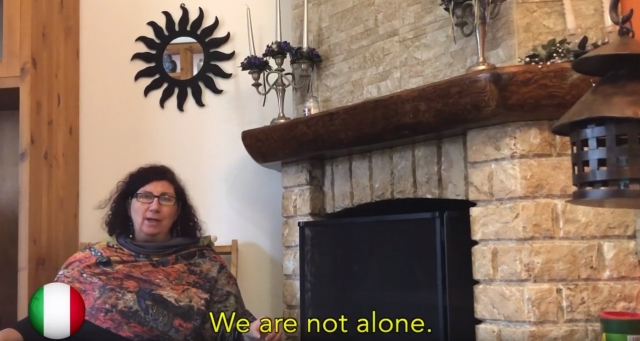 Experiencing the first symptoms of COVID-19 on March 14, she instinctively feared the prospect of hospitalization, but not the disease. She says, "I was not afraid, I never thought of asking God, ‘Why me?’. That's because I always had the idea in mind, ‘Why not me?’ I believe that being a Christian does not mean to be exempt from such situations, but rather to face them with a practical attitude, convinced that God is with you during the storm."

Maurizio (59) works at the hospital in Bergamo, Italy, with his wife, Luisa (56). He had the first symptoms on March 4. First a fever. Then came dyspnoea — a difficulty in breathing that continuously got worse. On March 11 he had to call an ambulance. He never got to say goodbye to his wife and 15-year-old son, and he left with only one fear in his soul — that he might never see them again. What he saw in the hospital, says Maurizio, was “pure terror.” With oxygen masks on their faces and waiting in line, people were frightened of what the medical staff might tell them in the next few hours.

Thankfully Maurizio is among those who was discharged. He is at home but isolated. He still has difficulty breathing and at night he still uses the oxygen mask. "Don't underestimate the virus; it can affect anyone — no one should play superhero. Do keep your social distance!” Maurizio concludes. Not before adding, though, "Something has changed inside me."

"The hardest and saddest thing was that I couldn't see my husband until he returned from the hospital after 13 days," says Luisa. Meanwhile, she was also found positive. She doesn't know if she got the virus from the hospital or from her husband — or from someone else. There were so many people around her who got sick. The source could be any one of them.

Luisa wants to continue thinking the way she does now for the rest of her life, and never to complain that the visits of family members or friends have taken too much of her time. "This experience made me understand the importance and beauty of time spent with loved ones," she said.

In Sweden I spoke with a Romanian woman — Rebecka. She is 52 years old and married to a Swede. Her husband, Thomas is 67. They live in Malmbäck. Rebecka suspects that she contracted the virus on the train. She, in turn, then infected Thomas. 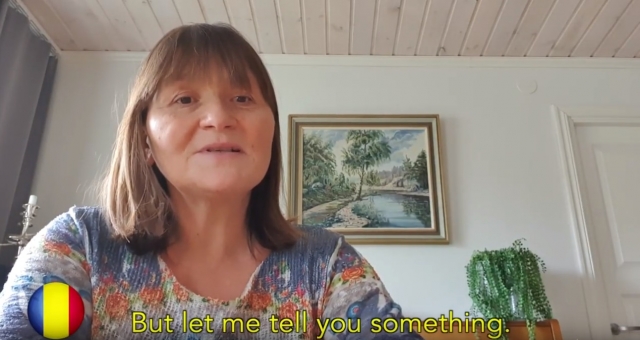 After developing a fever higher than 40 degrees Celsius and completely losing her strength, Rebecka was rushed by emergency ambulance to Jönköping. "I simply couldn't think too much," she says. “I could not eat for several days, continued to have a fever, a cough and felt ill.”

After she began to recover, Rebecka states, “You get time to reflect, you have time to think more about God and pray more for the family, loved ones, the world. Unfortunately, I think we humans will soon forget what we have been through, but I really hope I can take this with me — without God I am nothing." By the time Rebecka was discharged, Thomas was already feeling very ill. "Fever, cough, and as soon as you got up you started to pant. It was very painful.” He added, “The cough felt like it would never end." He was not scared but says the disease consumed all his resources. He feels that he would not have succeeded without God's help. "I will rely more on God in the future," He concluded.

And they, the faces of the stories above, have understood that they have not only an experience in common, but also a message.

The video above is the third in a series of #dearcoronavirus videos created by a network of Seventh-day Adventist communicators in Europe and beyond [GAiN Europe]. The aim is to present hope in the midst of challenge. The videos have been translated and shared in multiple languages and can be found by simply typing #dearcoronavirus into your search engine.  It is planned to add a new one each week.

They can also be found directly, in English, here:

Dear Coronavirus — a letter from around the world.

The original version of this article was first published on Semnele Timpului, website of the Romanian Signs of the Times. The interviews were conducted by Norel Iocab, a pastor and Semnele Timpului editor in chief. This version was published on the TED News Network, the official news services of the Trans-European Division of the Seventh-day Adventist Church, and is reprinted here with their permission.