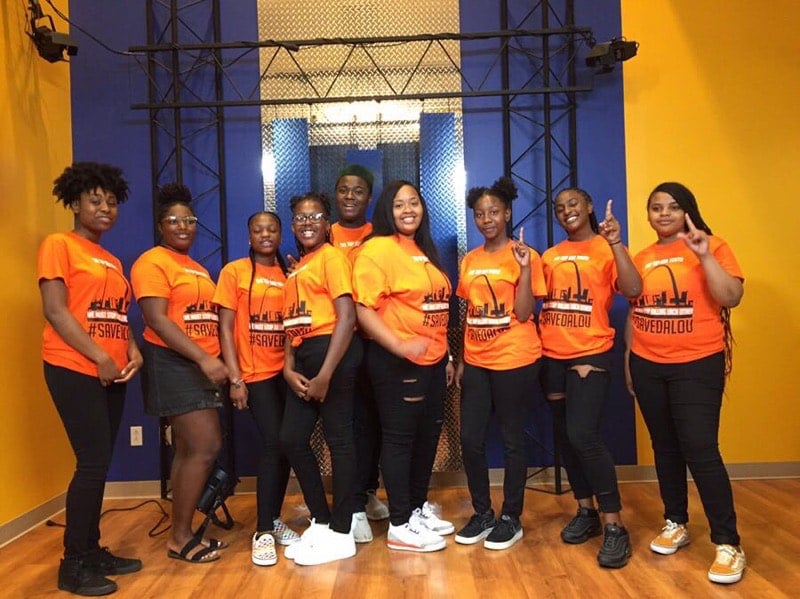 High school senior Skylar Robinson recently organized a protest at her local church, covered by the local TV news, because she is tired of hearing about more and more children killed by gunfire. She thinks it is time to do something to stop the violence.

Question: You recently organized an event as a protest against gun violence called “Stop Talking About It & Be About It.” What made you want to do something to combat gun violence against young people?

Answer: To date, 25 children ranging from age three to 18 years old in the St. Louis area have been killed by gunfire this year. We are losing way too many youth! And, sadly 2019 isn’t over yet.

I became fed up on August 23, 2019, when Jurnee Thompsom, an innocent eight-year-old girl, was shot along with four other victims in a parking lot near Soldan High School (which was hosting a football jamboree) in St. Louis. Unfortunately, Jurnee died due to her injuries.

I ran into my mother’s room and told her about the shooting. With tears in my eyes I told my mom, “This has to stop!” Her response was “What can you do about it, SkyPie? It’s the world we live in.” At that moment I felt motivated to make a difference.

So how did you get the idea to hold an event?

I was tired of not addressing the problem. I no longer wanted to sit down along with other citizens talking about what “St. Louis” needs to change. Or place the blame of failing us on other entities, when many of us aren’t doing anything about it to create change.

As a citizen of St. Louis, I wanted to take a stance. So I created “Stop Talking About It & Be About It!” This movement is intended to bring gun violence awareness and to create solutions to put a stop to gun violence.

I understand from the word of God that this world will get worse and that heaven is ultimately our home. However, I still would like to challenge other youth to spread awareness, love, hope, positivity, and to end any “beef” among each other as a way to help decrease crime among us.

I believe in my heart that this is a great start. Others may feel I will have to do more than that to combat gun violence. It is in my plans to do more. That’s when God placed it on my heart to get other youth involved at my church. 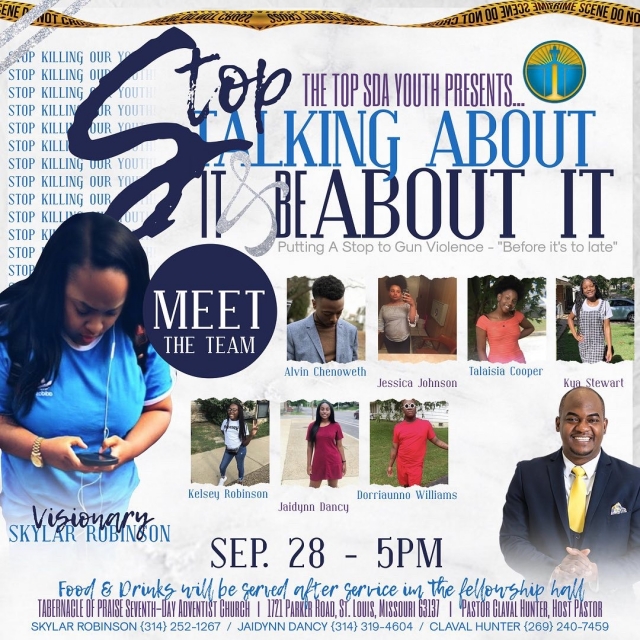 What did you need to do to organize it? Did you get help?

At church on August 24, 2019, I told my pastor, Claval Hunter of Tabernacle of Praise Seventh-day Adventist Church, about my idea and the movement I wanted to start. I told him about my plans to organize a summit that will allow my team and me to meet face to face with people from the community, such as troubled youth, and families who have lost children due to gun violence.

The pastor said he was filled with joy that I was inspired to do this summit. Immediately, he gave me his blessing, support, and a budget. The next two Sabbaths Pastors Claval Hunter and Cryston Josiah mentioned me in their sermons and told about my call to take charge with this movement. After church I was encouraged and congratulated by my supportive church members.

The summit you were planning was featured on the local TV news. How did that happen?

One particular church member, who is a police officer for St. Louis City, felt this positivity shouldn’t go unnoticed. She got in touch with a Fox 2 News reporter, Jasmine Huda. Ms. Huda contacted my mom and conducted the interview with me at our church.

Then, just two days before the summit, Pastor Hunter was contacted by the Fox 2 News station. They wanted to feature our team on the morning of the summit to promote the Stop the Violence summit.

Our summit was promoted well through St. Louis news appearances and articles, social media, and community outreach. We needed to let our community know that we are passionate about this movement and summit.

So with the help of my mom and team we began putting together the “Stop Talking About It & Be About It!” Putting a STOP to Gun Violence summit. Our goal was to leave attendees with a sense of hope, peace, positivity, and most importantly to be in the presence of God.

You held the event at your church, the Tabernacle of Praise Seventh-day Adventist Church in Spanish Lake, St. Louis, Missouri, on September 28. Who was there? How many people came? What did you talk about?

On September 28, 2019 at 5 p.m. the Tabernacle of Praise Seventh-day Adventist Youth presented the “Stop Talking About It & Be About It!” Putting a STOP to Gun Violence Summit. The summit was powerful — the Holy Spirit was definitely there.

My team and I had reached out to a few of our talented friends from Adventist churches in the area — as well as some friends outside the faith — to help us present. We touched the hearts of many through a real life dramatization, singing, rapping, poetry, praise dancing, and a reflection from a mother who lost her son due to senseless gun violence.

The Question and Answer panel discussion about gun violence among youth was a success because it was informative, peaceful, and non-political. It consisted of three panelists: Youth Ambassador of St. Louis Cedric Redmon, Police Officer of St. Louis City Eva Millar, and Seventh-day Adventist Youth Pastor Karyle Barnes.

At the end of the summit we prayed with three families who recently lost their teen sons to gun violence. And we gave the three families a love offering. Attendees ages 13-39 years old received their very own copy of the book Stop the Violence written by Dr. Christopher C. Thompson.

Afterward, we served light refreshments in the fellowship hall and attendees were able to connect with us about future plans.

It was a full house — I believe about 120 people attended the summit. Many attendees were middle-aged people. My team and I would have loved to have seen more youth from the community. However, I believe our next summit will be filled with youth because we have influenced many. This is evident because I have had youth outside the faith reach out to me on social media telling me they would like to join the movement. I know that God has and will continue to bless this movement. 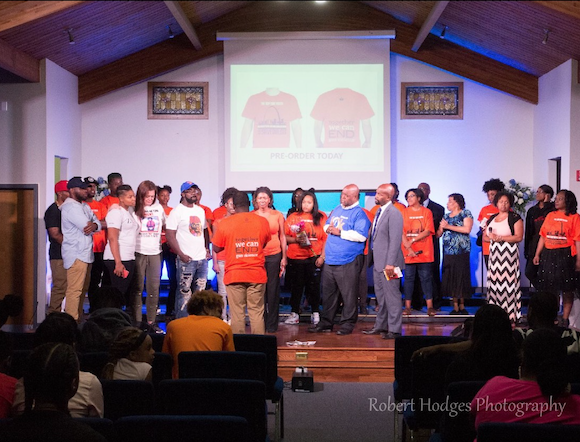 How did you think the meeting went? Did the group decide on any actions? What happens next?

My team and I plan to meet the first Sunday of every month to plan community outreach projects for that month. This will include feeding homeless youth at shelters, mentoring other youth in the community, praying over troubled teens, and going to high school events to encourage youth to stop the violence among us.

I would like for my church to have a mediation center. The saying from Tupac Shakur “The Hate You Give Little Infants Screws Everyone” stuck out to me because if we promote hate then generations that come after us will adapt to that behavior. That’s why my team and I are spreading positivity and challenging other youth to lead by example. We must stop killing each other! We are the future doctors, lawyers, teachers, and preachers.

Have you personally been affected by gun violence?

Yes, I have been personally affected by gun violence. I lost two of my relatives to gun violence: a cousin and an uncle. Their deaths made me very angry, but instead of being negative I have decided to do something positive. To decrease crime not just in St. Louis, Missouri, but the United States, we need more police officers, stricter gun laws, and more mediation centers. Most suspects who commit crimes are affected by mental illnesses, poverty, racism, drugs, and lack of opportunity.

Do you feel the Seventh-day Adventist Church has been active in speaking out against gun violence and in actions that can help prevent it? What could the church do better?

More resources need to be readily available. Churches and schools need to have mediation centers where youth can go to talk out any situation they have against each other.

Also, churches and schools should provide more awareness and resources for the drug epidemic that is plaguing our generation. Those issues are huge factors in gun violence among youth.

I am a fifth-generation Seventh-day Adventist. But we don’t like to come out of our comfort zone to address the issues of gun violence and drugs in our communities. It would be super cool to see our faith have mediation centers, drug rehabs, and shelters for the homeless. Unfortunately, I only see our church connected to food pantries, colleges, universities, and hospitals. Those places are important but I would love to see more Adventist churches reach out to their communities and get their “hands dirty.” Too often we, as “church folk,” only want to associate ourselves with folk “like us” and not reach out to those that we feel aren’t on our level. We must break that cycle! We are living in the last days and it’s our job to reach out and lead souls to Christ. I believe God can pull and use anybody from any situation. And we must be that connection!

You are a senior in high school? What subjects are you interested in? Do you have college plans? What do you hope to do in your career?

I am going to college after I graduate from high school. I have so many careers in mind that I can’t make up my mind. Some ideas are becoming a counselor, an activist in my community, and a computer technician. I hope and pray that God will send me a career, so that I can become successful.

My favorite subject in high school is history. I enjoy learning about important events that have occurred before my time, especially the stories about the boycott that was organized after Rosa Parks refused to give up her seat on the bus. I love the stories about the boycott because that protest against racial segregation kind of ties into what I am doing for my community with a protest against gun violence.

Skylar Sanee Robinson was born and raised in St. Louis, Missouri. She is a 17-year-old senior at Hazelwood West Public High School located in Hazelwood, Missouri. Skylar is the founder and organizer of “Stop Talking About It & Be About It!”

We invite you to join our community through conversation by commenting below. We ask that you engage in courteous and respectful discourse. You can view our full commenting policy by clicking here.
Facebook Twitter LinkedIn