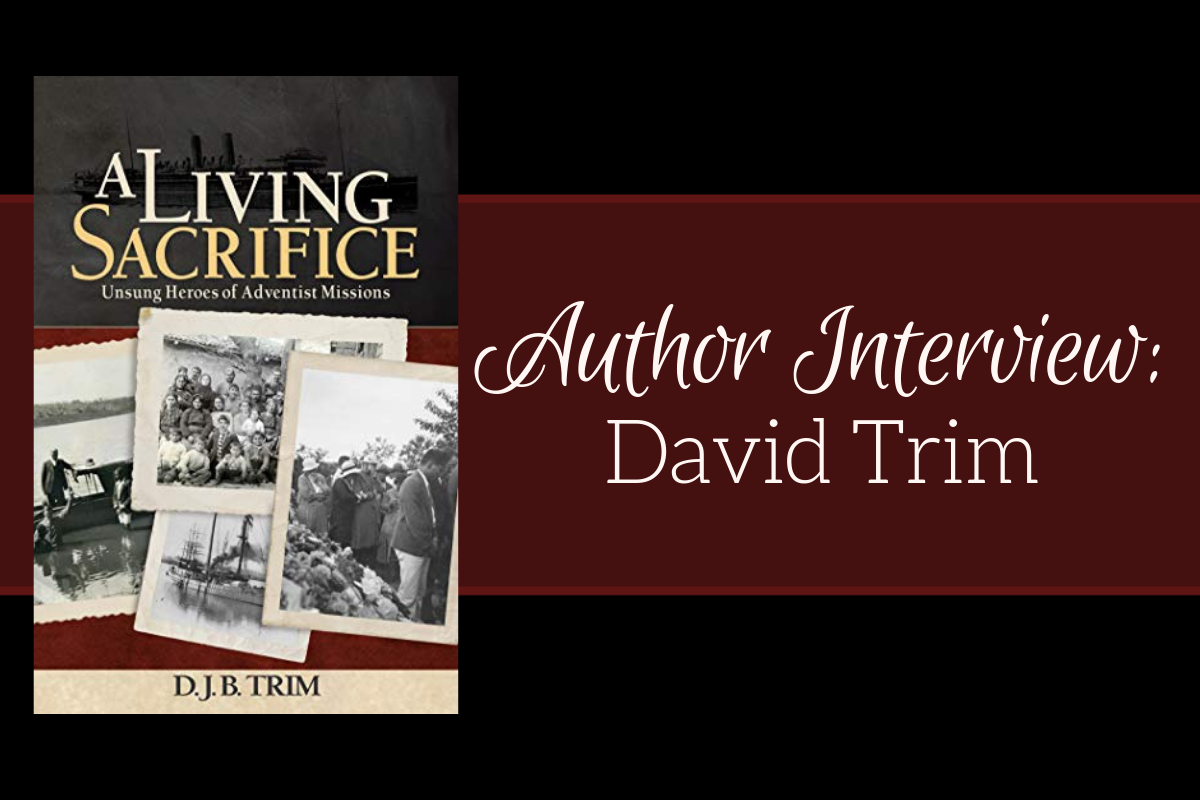 Dr. David Trim, director of the Office of Archives, Statistics, and Research at the General Conference for the past decade, was born in Bombay, India to missionary parents. He continues to be passionate about missions and the spread of the gospel. His most recent book, A Living Sacrifice, shares stories of many of the unsung missionary heroes who have made the ultimate sacrifice in giving their lives for the cause of God.

Dr. Trim, those of us who grew up in the church were inspired by missionaries on furlough who came to our churches and camp meetings, sharing exciting stories of their adventures for God. And the “Book and Bible Houses” had a supply of thrilling stories from the mission field. Many of us grew up praying for the “missionaries and colporteurs”…the ones we had met, but also the many whose names we didn’t even know.

We remember the "big names" and build institutions with their names on them. But there are many “lesser-known names” — many of whom gave their lives to further God’s kingdom. Their impact is no less important. You’ve written an amazing book telling their inspirational stories. You shared a powerful quote from W. A. Spicer who in 1902 was the secretary of the Foreign Mission Board: “Those who go into the fields must be ready to lay down their lives, and at the least must be ready to lay everything they have in the world upon the altar of service.”

Question: That’s a pretty stark comment, coming from the General Conference. Reading something like that, what was it that caused our early missionary pioneers to rally behind that type of mandate?

I think they simply felt compelled to share Christ and His love. Again and again, in their correspondence and articles, they stress that people have to hear about a Savior.

And it wasn’t just pastors or doctors who went as missionaries. This passion to share Christ went through every level of the church to “ordinary church members.” In those early days of mission, there were no local Adventists in the places they were going to, so they went as secretaries, administrative assistants, or even as cooks to work in the kitchens of sanitariums. All kinds of people went as missionaries — compelled to share the love of Christ.

Certainly going into all the world wasn't just a slogan for them. It was a way of life.

Absolutely. And of course, this was an era when travel took a lot longer. Even after crossing the ocean to get to a mission field, travel could be very lengthy and difficult. Alfred and Elizabeth Cott sailed from San Francisco through the Panama Canal to the Caribbean. Once they finally arrived in British Guiana, they had to travel 400 miles into the interior, covering the last 150 miles on foot and in Indian canoes. It took them five and a half weeks.

Your work at the General Conference is in the Office of Archives, Statistics, and Research. For most of us, that might sound a little boring. But you have access to records and information that really starts to come to life when you share it in your book. What got you started studying the stories of these unsung heroes?

I suppose it is partly that my parents were missionaries. I was born in the mission field. We left when I was still a child, so I have only a few memories of that, but I grew up with the sense that I belonged to a worldwide church that was committed to sharing Jesus with people everywhere. I also grew up listening to mission stories in church, Sabbath School and youth groups, which I think people of a certain age can relate to. I heard stories of missionaries that were inspiring.

When I came to my position at the GC and started looking through the documents, I was instinctively drawn to the stories of missionaries. One of the great unknown sources in the General Conference is the collection of the files of people who were sent as missionaries. These files are very rich. Some date back to the 1920s. These files offer intimate details, including the illnesses that people suffered. My book is based, in part, on the stories in these files.

Were there any surprises that jumped out as some of these stories were unfolding? Something that you weren't expecting to find?

Yes. First is how young many of these missionaries were — people in their early twenties mostly, sometimes even in their late teens. I was expecting to find that the church mostly sent people over 30 who were experienced. Instead, they're sending very young people. Also surprising to me was just how great were the sacrifices that people made, even those who didn't actually die while on mission service. The missionary files record illnesses, and the emotional difficulties and traumas that these people sometimes experienced.

James and Ellen White and many of our early pioneers were also quite young as the church was being established, but we haven't thought about missionaries being so young. That was a gamble on the church's part — to let these young people put their stamp on the Adventist work in these countries.

I hadn't thought of it in those terms, but you're absolutely right. These are the people who are actually going to shape the Adventist church of the future in these fields. Perhaps there's a lesson for us today that we can put more trust in our young people.

Is there a story that really made a significant impact on you, and if so — why?

Yes. I actually begin the book with that story — the story of Eva May Clements, an Australian. Going through some documents, I noted the date of her death. I checked further and found she had been in the mission field for a very short time before she died. She was only 23 years old. She had been in the mission field only seven months — not even a year — when she died. That struck me somehow. I found it very moving.

I thought, “There must be other stories like this.” I began to keep a file on missionaries who died in the mission field. I know; it sounds very morbid! But I found many more examples of young missionaries who died soon after going out. I began to explore what happened to missionaries more widely in that era before modern medicine and before it became possible to quickly evacuate someone to a hospital in the west. The book focuses on the missionary period from the 1890s through the 1940s. That's not to say that being a missionary after 1950 is easy, but it was different.

Eva May Clements had the courage and the commitment to the Adventist message to go to a very alien place at a young age. And the fact that she died before she was really able to do very much, to me, doesn't invalidate the sacrifice she made. In one of the last letters she wrote she said, “Picture these poor people for whom Christ died. How can we let them know?” And I find that question very, very poignant. I think it's still the question because there are still billions of people who don't know that Christ died for them, much less the distinctive Adventist truths. And so the question is still there — how can we let these people know that Christ died for them?

What can be done to revive the sense of mission in our churches?

I think we need to start telling stories of mission failure as well as mission success, even though that goes against the grain. But there are places where Adventists have a presence, but nothing much is happening. The Middle East is an example. We've been in the Middle East since the late 1890s, more than 110 years, and what do we have to show for it? We have some very nice churches that are too big for the handful of members who live there. And that's not to denigrate the commitment of those church members, who face tremendous challenges; but nothing much has happened in some of these areas. And I think it's OK to acknowledge that.

I think sometimes we assume, okay we've got an Adventist presence in this country now, everything else will flow from that. So I think we need to tell stories about challenges, but I think we also need to tell stories about missionaries of the past. I was humbled by these stories of a commitment to go somewhere very alien to share the love of Christ.

The world has changed dramatically since the time of the missionaries you wrote about. Travel, satellite, TV, internet. What has changed in mission service and what remains the same? What does a missionary look like today?

One of the most obvious changes is that missionaries don't have to sacrifice connection to their families as much, because travel is relatively easy and cheap. So today we bring missionaries home for annual leave. Whereas up to the 1940s, the typical term was ten years before a missionary had a furlough. That meant missionaries sacrificed connection to their families, and if they sent their children to a boarding school in America, as many did, they didn't really know their children.

You asked, "What does a missionary look like now?" The classic image we have of a missionary is a man dressed in a khaki suit with a pith helmet and a machete in his hand, hacking his way through the jungle encountering angry hippos and crocodiles and then entering a village of savages and telling them what's what. That was probably never exactly true for Adventist missionaries, but it’s certainly not true today.

Today, missionaries have become heavily medicalized, bureaucratized, technologized by which I mean they overwhelmingly work in institutions, especially hospitals. We no longer need to send somebody to Tanzania, for example, to conduct evangelistic meetings, because there are Tanzanians who can do it far more effectively than we can. What these places often lack are skilled people with qualifications in such areas as information technology, computers, and academia. So that's what most Adventist missionaries would look like today — somebody working in an institution and in an office or in a classroom or in an operating theater. But these people have restricted contact with the great mass of people. We're realizing now that there is still a need for the type of missionary who does have contact with ordinary people. There are parts of the world where a missionary can witness in a way that local people can’t because they might be arrested, imprisoned, beaten, tortured, even executed. Whereas a westerner might spend a couple of unfortunate nights within their consulate.

So, there really are still places where a missionary is needed in the same way they were a hundred years ago — working directly with people and telling them about Jesus. That need is what will inspire people again to mission service.

Dale E. Galusha is president of the Pacific Press Publishing Association. This interview was provided by Pacific Press.