The impact of social media cannot be denied. Facebook is a world of its own, and the Wakinda SDA Fellowship Facebook group, a virtual Facebook group born out of Wakanda from Marvel’s Black Panther movie, is a world within that world that has nearly 11,000 members. It is an example of a viral sensation.

On February 18, 2018 (President’s Day weekend), just days after the release of the Black Panther film, Saba Nwankpah of New Jersey saw a post regarding the movie from Cryston Josiah of Missouri. The post said, “It’s already begun... my People being critical of my People! (Pastor of the Wakanda SDA Church).” Wakanda is the fictional territory where the superhero in the movie lives. 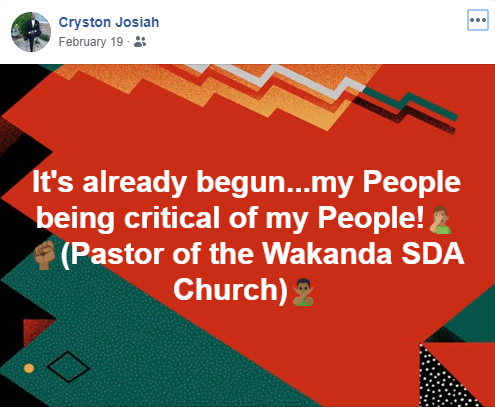 Finding the post hysterical, Nwankpah reached out to Josiah and asked if she could use the name to start a Facebook group: the Wakanda SDA Church. Together they formed what is now the Wakinda SDA Fellowship Facebook group.

Thinking the group would only consist of their friends and a few others, they were surprised when it already had 55 members in less than two hours. Josiah jokingly commented that at the rate it was growing, it might be the fastest growing church on the planet.

Wakinda SDA Fellowship (Formerly The Wakanda SDA Church) has grown into a group of (mostly) committed Adventists who enjoy fellowship, faith, and fun. They make fun of the things that some take too seriously, and focus on topics that are at the cross section of where black identity, Adventism, and culture collide. It isn’t a church, so come as you are, but not without your funny bone.

Three founding principles of the group are:

• Our roots stem from Wakanda.

• We’re a kind(er) version of our faith to others and to ourselves.

Black Panther is a movie with a black superhero that portrays black people as kings and queens and leaders in a place that has not been colonized by the outside world. Similarly, Wakinda brings black identity, culture, and Adventism into one place.

Adventism is a culture, not just a church. This group is not intended to be like the 144,000 groups you may have encountered on Facebook that seem to create an Adventist elite or a separatist movement. The idea of Wakinda SDA Fellowship is to be a fun, open space to be real and comfortable. It’s a welcoming, non-judgmental environment with humor and order. It’s for those who feel ostracized, judged, and unwelcomed by the church.

As interest began to increase, so did the mission. “There’s no way we can have this many people in one space and not throw out a lifeline to reconnect with God,” shared Josiah. Because of the growing interest, Friday night vespers speakers formed an online church community with a spiritual component.

Many millennials are not looking for church, but they are looking for God. The goal of the group is not to reflect local churches; it is bigger than that. It has so many intersections making it a valuable reflection of the people who go to church.

Wakinda is about where the people are without the facade. It shows the hidden church that talks about things not spoken about inside a normal church building: politics, women’s ordination, drums, movies, the single’s struggle, the parent’s struggle, and more.

It is a reflection of the people rather than the denomination. Sometimes the person who we display at church isn’t who we really are, and challenges are sometimes more accepted outside of the church than in it.

Wakinda is intended to be a true reflection of what black Adventist culture actually says and thinks — how things relate to and pertain to us.

The structure of Wakinda includes the leaders, senior pastor Cryston Josiah — who is for the people — and first elder Saba Nwankpah — who is about order. Then there are the Waints, aka the members.

From the moment the group started, Pharisees, also known as trolls on Facebook, wanted to condemn everything about it. Calls were made to the conference president saying the group was promoting spiritualism, and angry texts were sent.

The group began as an open group, but once it exploded, they had to “close the fellowship hall,” making it a closed group in Facebook terms, but still open to anyone who wanted to join. This helped keep good stuff in and bad stuff out.

“You can’t be the light and salt of the world if you’re in a bubble,” says Josiah. Still, “closing the group was an ordained moment to balance the conversation,” says Nwankpah.

Waints ask questions, have debates, and post prayer requests. Tangible evidence of the power of it all comes in the form of prayer at a bedside of a hospital bed, or when Waints go back to church because of the connections they made online.

Some of the long-term goals for Wakinda SDA Fellowship include having a meetup and a topical podcast. “We want to bring people in, but Adventist culture is not always conducive to that. We’re bridging the gap of who we are because of tradition to what we’re supposed to be as Christians,” says Nwankpah.

Wakinda is like a gas station to get energy, but not a final destination. That is what the church is supposed to be. We have a home in heaven, not the sanctuary. 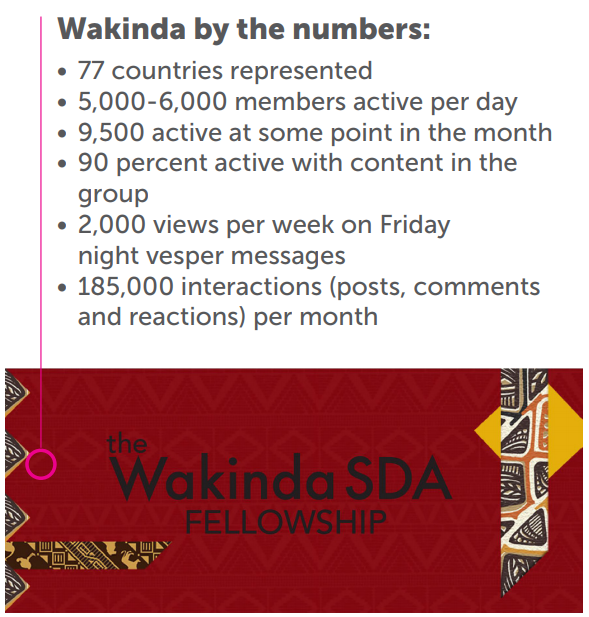 Brittany Winkfield is communication director for the Central States Conference.

This article originally appeared in the November-December 2018 print issue of Outlook, the official magazine of the Mid-America Union. It is republished here with permission.