A Candid Conversation with Bill Johnsson

A Candid Conversation with Bill Johnsson 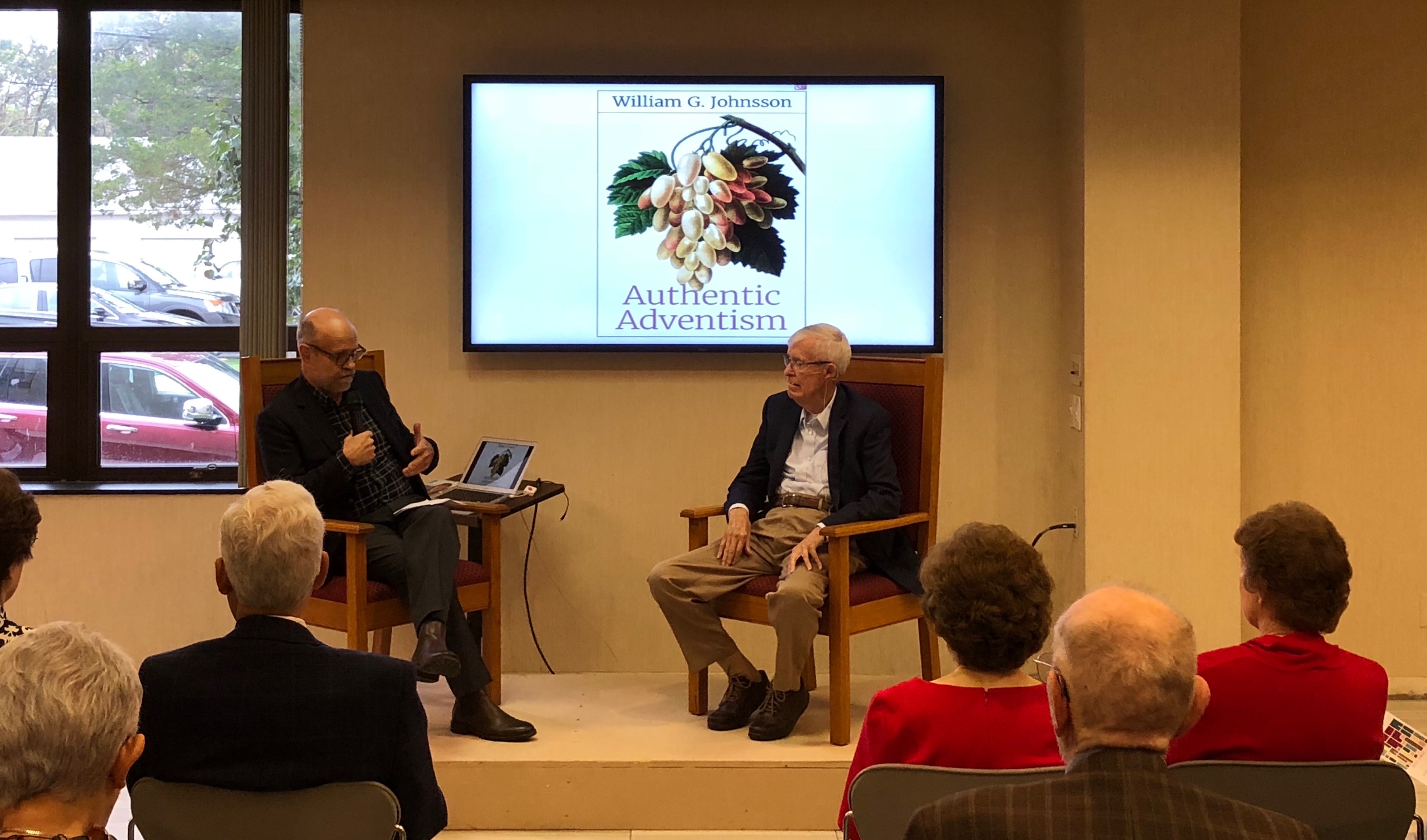 “Bill has always been a pastor, and a writer, and in the last five years he has become a prophet,” said Charles Sandefur, introducing Dr. William Johnsson to the Faith and Reason Sabbath School at Sligo SDA Church on October 6, 2018. “The world knows him as Dr. William G. Johnsson, former editor of the Review, but we know he and his wife as Bill and Noelene, members of our class for many years here at Sligo.”

The Johnssons were making a nostalgic stop at Sligo Church as they wrapped up a two-week trip east from their home in Loma Linda, California. The appearance comes as Johnsson’s second book in a little over a year, Authentic Adventism, follows on the heels of his best-selling Where Are We Headed? Adventism after San Antonio.

“Your book, Authentic Adventism, is like an epistle to the church,” said Sandefur. “Tell us how it came about.”

“It’s my heart cry over what I see and hear in the Adventist family,” responded Johnsson. “I don’t see myself as a critic of the church.” He paused: “You know, after I finished the first book, Where Are We Headed?, I felt I was done. I’d said what I wanted to say, but it was difficult. It wasn’t hard to write, but it was difficult to say what I felt I had to say.” He looked at his wife, Noelene, sitting with friends on the front row. “Really, these books would not have come into being if it were not for Noelene. She said, ‘The people need this book; the pastors need this book.’”

“Thank you, Noelene!” someone said from the audience.

“I was about to speak in the Sunnyside Church,” he continued, “singing the hymn before I stood up to preach. And as I sang, the idea for the book came to me. Before I went to sleep that night, I knew the title — Authentic Adventism.”

“What is an authentic Adventist?” Sandefur pressed. Johnsson smiled. “One who follows the life and teachings of Jesus,” he said. “And what would an inauthentic Adventist look like?” “Someone who does not walk the talk, who does not follow justice, not omitting the weightier matters.” Then he added, “I am troubled because I think our church is following official discrimination against our women pastors.”

“That sounds too easy,” said Sandefur. “Talking about Jesus is too easy.” “I’ve heard that line before,” said Johnsson, with a chuckle. “It’s only about Jesus. There isn’t anything else to talk about.”

“Listen,” he said, “these days we attend the Crosswalk Church in Loma Linda. The pastor is Tim Gillespie. They have three services on Sabbath morning; 1,500-2,000 people in attendance. The average age is 30-35. Some of these kids are driving from LA and beyond on a Saturday morning to attend. This church has given me so much hope. They appeal to millennials. Chance is there will be a bloodmobile out in the parking lot; give blood before you go home! They have a free legal clinic. This is authentic Adventism.”

“You’re the Ruth Bader Ginsburg of Adventism with the millennials,” Sandefur said to laughter. Someone in the audience called out, “The Notorious W.G.J!” to more laughter.

“It’s a different approach alright,” agreed Johnsson. He appeared slightly embarrassed at the reference. “Is this the Adventism of the future?” asked Sandefur. “The Adventist church of the future meets in an office complex,” said Johnsson. “The music is loud, that’s LOUD in all caps. They hand out earplugs at the door. There’s a seven-piece band, not exactly my cup of tea in music. And there’s a coffee bar. But they do not sing 7-11 songs: seven words repeated eleven times… the words of some songs are magnificent, and the focus is always on Jesus.”

Shifting topics, Sandefur said, “There’s an interesting dichotomy going on in our Church: despite the conflict over women’s ordination, tithe is up, baptisms are up. How do you account for that?”

“You know, that’s interesting,” said Johnsson. He leaned forward in his chair. “The Pacific Union Conference has contributed $4.6 billion in tithes and offerings since they began ordaining women.” There was a gasp from the audience and people shifted in their seats. “That’s billion with a B,” said Johnsson. “If those monies were to dry up, the financial stability of the church would be in danger. The GC is playing with fire. Actions they are contemplating could destroy this church.” He shook his head. “I’ve never spoken this way before, but these are extraordinary times.”

The question of how these latest books have changed the Johnssons’ lives came up. “I never would have thought of the effect,” said Johnsson. “When we go out walking in Loma Linda a car will pass by, stop and back up. ‘Are you Bill Johnsson?’ they’ll say. ‘Thank you for your book. Our church is reading it right now.” The first book has been translated into four languages and more translations are planned.

Sandefur mentioned that congregations with women pastors have together contributed nearly a billion dollars in tithe over the years. “Not conferences or unions, but congregations,” he emphasized. Johnsson nodded. “Our church is caught in discrimination against women,” he said. “We’ve got to speak out. The message of the prophets was always justice, justice, justice.”

“That brings up another question,” said Sandefur. “Why should I remain an Adventist?

“Where would you go?” asked Johnsson. “Why do I stay? Because this church has made me what I am.” He talked at length about the challenges the church will face in the months to come. “The Adventist church faces some stormy sailing ahead, but I think it will be good in the end.”

The conversation turned to this moment in the life of the church. Johnsson believes that a new Adventist church is struggling to be born. In some cases, there has to be a death before a resurrection. “There are hundreds of little churches,” he said, “that are cold and unforgiving, that ought to die and new churches to be planted.” Returning to the success of Crosswalk, he said that the pastoral staff and the congregation do not want it to become a mega-church. “There is a Crosswalk Church in Tennessee and another in London,” he said. “These are movements arising from the ground up, led by the Holy Spirit.”

What about the General Conference? Johnsson raised his hands and let them drop. “These are not bad people, they’re good people, but they’re woefully out of touch. The GC has become irrelevant. They live in a bubble, isolated from the people. Such a waste of money.” He paused, and added, “And there is an echo chamber.”

He returned to a favorite text, Micah 6:8. “What does the Lord require of us?” he asked. “To do justice. Justice is first. Then to love mercy and to walk humbly. But justice is first.”

Sandefur brought the conversation to a close. “Bill,” he said, “with all the years of service that you have, with all that you have written and preached and thought about — if you had two minutes at the Annual Council to address not only the General Conference, but us, all of us — what would you say?”

Johnsson bowed his head for a long moment. He didn’t speak at first; his hands were folded in his lap. He looked weary. He seemed to be choosing his words carefully.

Finally, he looked up and said simply, “Keep following Jesus.”

Editor's Note (Oct. 9, 2018): Dr. Johnsson's quote regarding the music at Crosswalk has been updated, per his request.