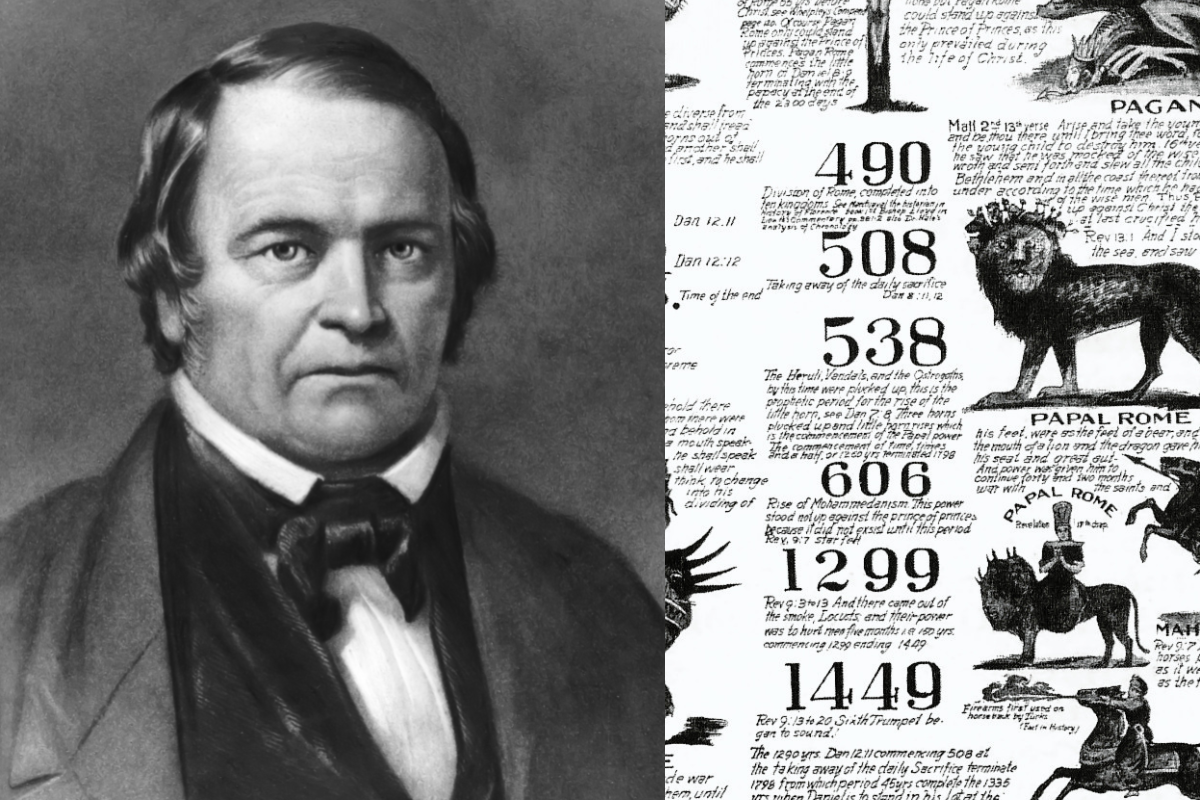 In this column’s first installment, I provided evidence from the 2,520-day-year prophetic period, the seven times of the gentiles. In this column’s second installment, I provided evidence from Miller’s interpretation of Hosea 6:1–3. The case of the Muslim world in Revelation 9 was the third installment. The case of Luke 13:32-33 is the fourth installment in a series of about a dozen cases substantiating that both Miller’s method and results were mistaken. Miller's Jubilee prophetic period proof is the fifth case. My sixth case was the six-thousand-year prophetic period known as the Millennial Sabbath theory. My seventh case is how Miller interpreted the 666 of Revelation 13:18.

As this series has repeatedly emphasized, Ellen White was convinced that Miller had special divine guidance that resulted in an explosion in Millerite understanding of "the last days." As a result, Miller was able to discover fifteen mathematical proofs that the end would come in 1843. In 1843, Miller stated his thesis in one sentence: "Time proved in Fifteen Different Ways." "These several [15] ways of prophetic chronology prove the end in 1843." He had so many proofs that he had difficulty in persuading his editors to include any more than four or five at any one time. All fifteen of them would not fit in the 1843 Millerite chart.

"I saw that God sent his angel to move upon the heart of a farmer who had not believed the Bible, and led him to search the prophecies. Angels of God repeatedly visited that chosen one, and guided his mind, and opened his understanding to prophecies which had ever been dark to God's people."

However, Miller's actual textual interpretations do not evidence a high quality "understanding" of "prophecies which had ever been dark to God's people." Evidence from seven cases is accumulating to support this inductive conclusion.

In today's case I reference what Miller counted as his fifteenth proof. Miller's fifteenth textual proof that the Second Coming had been preprogrammed by God for the year 1843 comes from Revelation 13:18:  "Here is wisdom. Let him that hath understanding count the number of the beast: for it is the number of a man; and his number is six hundred threescore and six."

In some of Miller's other chronological proofs at least he includes some pretext of a time element under the guise of a "day" equaling a historical year. Or, for example, the case of Hosea 6 where Miller claims that the word "day" refers to a thousand years. Here Miller does not even propose even a patina of chronology to justify his assertion that the "number of the beast," namely "six hundred threescore and six," indicates a historical period of exactly six-hundred and sixty-six years. He merely makes an unsubstantiated and gratuitous assertion that: "This text shows the number of years that Rome would exist under the blasphemous head of Paganism, after it was connected with the people of God by league; beginning B. C. 158, add 666 years, will bring us to A. D. 508, when the daily sacrifice was done away." He further alleges that this 666 years "is connected with Daniel xii. 12, as before quoted."  [Why should this 666-years be connected with Daniel 12:12?] He continues saying: "Then add, Daniel xii. 12, the 1335 to 508, [which] makes the year 1843." It is well established that Ellen White, following Miller, claimed that "the daily sacrifice" symbolized pagan Rome whose hegemony Miller said ended in A.D. 508.[1] However, Gerhard Hasel, writing as a member of the Daniel and Revelation Committee, contradicts Ellen White and states that, far from being pagan Rome, the term "the daily sacrifice” is understood by most Adventist exegetes as the "taking away 'the continual priestly ministry of Christ in the heavenly sanctuary (Heb 7:25; 1 John 2:1) and . . . the true worship of Christ in the gospel age.'"[2] It is a stupendous development when "the daily sacrifice," according to White, is pagan Rome, while per Hasel it is "the true worship of Christ."

In short, Miller simply presumes that 666 represents a precise time period. He also presumes that this prophetic period began in 158 B.C. Miller's fifteenth proof is special in that all his other prophetic periods end either with "the time of the end," which he calculated as beginning in 1798, or "the end," which he estimated would be in 1843. Thus, Miller must combine his nineth proof, his 1335-year period, with his fifteenth proof, his 666-years, and start the latter in 158 B.C. to achieve his predetermined date of 1843. This is the year, Miller writes, "when the beast and his image will be tormented in the presence of the holy angels, and the Lamb. See Rev. xiv. 9-12." He then notes that this verse teaches an eternal hell. Because the text says that "the smoke of their torment ascendeth up for ever and ever; and they have no rest day nor night, who worship the beast and his image."

When Miller wrote his fifteenth proof, he was strongly hinting that to be "wise" unto salvation required knowing the definite time of Christ's Second Coming. Enoch Jacobs stated it quite directly when he wrote:

"The time of Christ's coming, will, in every case, decide the question whether an individual is already in possession of that faith which is necessary to salvation [emphasis added].

He asserted that knowing the time when probationary time would close "must therefore prove, and is proving, a true test of saving faith." He stated that those who said that it was unnecessary to know the definite time were "virtually charging God with folly in revealing the time. . . ."[3]

At the culmination of his treatise on his fifteen prophetic periods Miller finishes by putting a rhetorical question in the mouths of his listeners: "You ask, will all who do not look for him, perish in the day of his coming? I answer, it would seem so, by many texts of scripture. Yet I am not their judge. God only knows what will become of them. They that were ready went in with him, and the door was shut." In other words, while Miller hesitates to pontificate definitively, he lets his audience know that "many texts of scripture" predict that "all who do not look for him," code for knowing the definite time of his coming, will indeed "perish in the day of his coming" and that the "smoke of their torment ascendeth up for ever and ever; and they have no rest day nor night."

This fifteenth prophetic proof, with its combination of 666-years and 1335-years ending with hell fire ascending for ever and ever in 1843, is difficult to revise with a correct-day, wrong-event hypothesis. This combination proof clearly ends in hell-fire and there is no heavenly sanctuary in the textual vicinity to replace the original hypothesis that the earth was the sanctuary that would be cleansed. This fifteenth prophetic proof is another clear case of Miller's eisegesis. He is so determined to come up with another interval that will end in 1843 that he forces a chronological interval with a precisely known beginning and end into his commentary.

Donald E. Casebolt studied in the MDiv program at Andrews University, studied Semitic languages and Protestant theology at Karl Eberhard University at Tubingen, Germany, and spent two years in a doctoral program at the University of Chicago's Oriental Institute. He recently published Child of the Apocalypse: Ellen G. White. A second book, Father Miller’s Daughter, will be published by Wipf & Stock in 2022. He is a retired nurse practitioner.