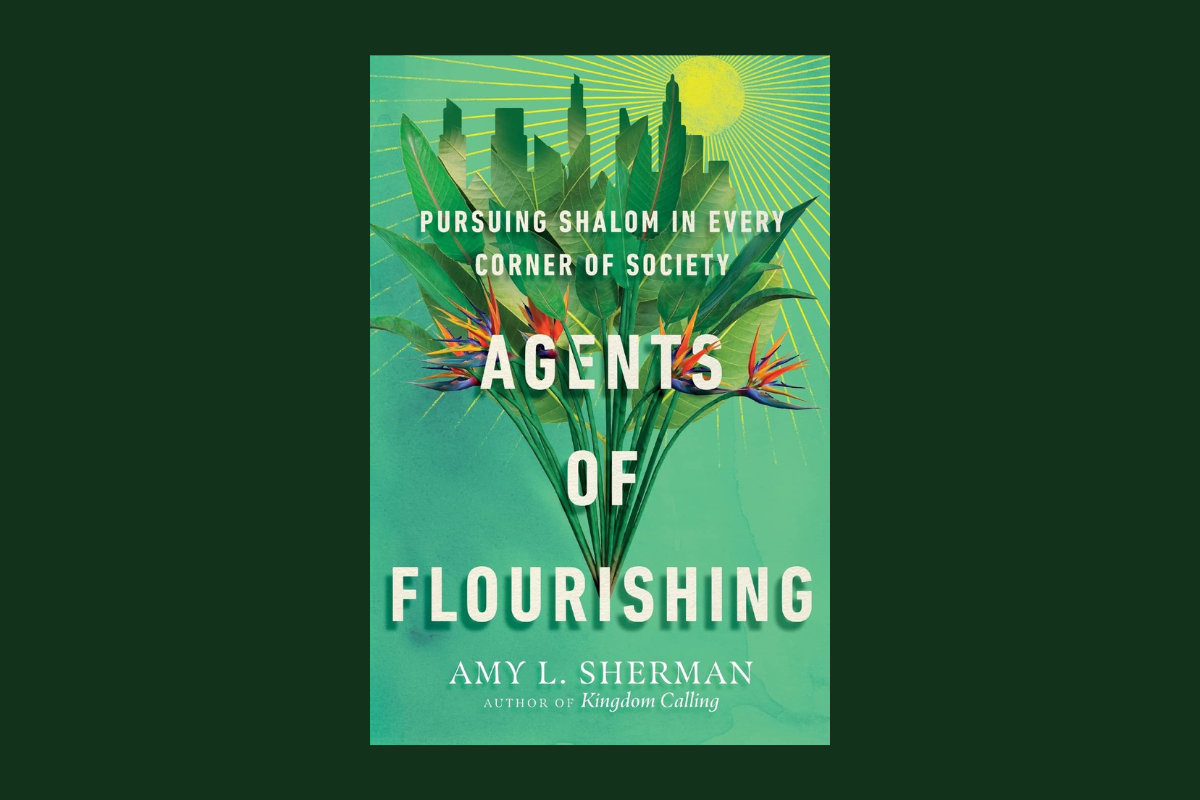 Review of Agents of Flourishing: Pursuing Shalom in Every Corner of Society, by Amy L. Sherman

The idea of being in a healthy, vigorous state, to be “flourishing,” is naturally appealing and has made its way into a number of book titles. For our faculty book club, we read The Flourishing Teacher, by Christina Bieber Lake. A brief check on Amazon reveals The Flourishing Pastor, The Flourishing Lawyer, The Flourishing Marriage, The Sermon on the Mount and Human Flourishing, and many other “flourishing” titles. But don’t run out and buy The Flourishing Entrepreneurial Lifestyle just yet. Some of the titles are about how to create your own flourishing; others are about communal flourishing. Amy Sherman’s new book, Agents of Flourishing, crystalizes something I really appreciate, calling and helping equip readers to become “Agents of Flourishing.” I don’t necessarily want that on a t-shirt—as I do “writing is a superpower”—but I definitely want to bear it in my mind as a daily reminder of Christian vocation. (Shout out to Carmen Lau for calling attention to this book in her column in volume 50, issue 3, of the Spectrum journal last year.)

Sherman begins with an anchor text for her book, Jeremiah 29:7: “Seek the peace and prosperity of the city to which I have carried you into exile. Pray to the Lord for it, because if it prospers, you too will prosper.” After a chapter describing what she means by “flourishing,” Sherman organizes her book around six “realms” of flourishing: social mores and ethics; human knowledge and learning; creativity, aesthetics, and design; political and civic life; economic life; and natural and physical health.

Each “realm” includes a cluster of two to three chapters, with the first articulating a biblical foundation for that realm of flourishing, plus a brief history of some ways the historical church or individual Christians have been involved in that realm, and then one or two follow-up chapters illustrating how modern-day churches have created community flourishing. In addition to 292 pages of text, the book has over 40 pages of notes.

The value of this book lies in its theory and framework of flourishing, combined with dozens of ways churches from Baltimore to Los Angeles are creatively engaging their communities. As Adventists, we have the market cornered on Daniel and Revelation seminars, and we have a contribution to make with those, but there is so much that can be done to create positive interaction with our communities that will not be done by such seminars. There are, of course, many Adventist churches that already have positive and creative ways to interact with and support their communities–the Beyond the Game basketball camp run by Harbor of Hope church in Benton Harbor, Michigan, taking place on the Andrews University campus last summer comes immediately to mind—but there is such a fountain of ideas in this book that any pastor or lay church member could gain a lot from studying it.

Let’s have a sample of Sherman’s theory, and then some examples from church engagement with the community.

“Flourishing is characterized by communion with God; beauty and creativity; wholeness; unity in diversity; prosperity and abundance (15–16).

“The secularist sees flourishing as achievable through human actions alone in a society that has cast off the strictures of orthodox religion, with its (allegedly) outdated view of a God who has a claim to our obedience. . . . In Mark Sayer’s memorable phrase, ‘the kingdom without the king’” (18).

One kind of secular flourishing is “about me getting my desires satisfied—and the heck with you. This is the exact opposite of biblical flourishing” (19).

“We were made, in short, for worship and mission. We flourish when we inhabit this vocation (since it connects us in an intimate relationship with our Heavenly Father and engages us in the life we were designed for), and others flourish when we discharge it in God’s strength and according to God’s ways” (21).

“We can reject both a chaplain-to-the culture approach accommodationism and an ugly, dominate-the-culture approach that lusts for political power. We can instead embrace our identity as strangers in this world who—in ways that are bewilderingly attractive to nonbelievers—honor our King through holy lives of wise, sacrificial love” (11).

I love the phrase “bewilderingly attractive” as a description of Christian love and care for the community. This love doesn’t make sense from a materialist perspective, but it irresistibly draws in the non-believer who, in Sherman’s picture, can’t quite figure it out but wants it, wants to be a part of it, wants to join in with these people who are caring for their neighbors.

Let’s take a look at three of the realms and examples of what churches are doing within them.

As Adventists, we have an amazing education system, spanning from kindergarten through graduate education. I remember, when I was a parent of young children, thinking it was a bit much to have my taxes going to pay for public school education when we were also paying for private education. Now I see that perspective as shortsighted, in that the majority of our nation’s kids are going to be attending public schools, and the health of our democracy and of those children and of our future communities will be significantly affected by the quality of education those kids receive in the public education system. Therefore, I found it heartening to see the efforts of various church organizations to partner with the public school system to improve educational opportunities and student success.

For instance, there is Caring for Kids, Kansas City, which partners with “civic agencies, faith-based organizations, businesses, and nonprofits around some eighty-plus schools, mostly elementary, from seven different area school districts. Hundreds of churches, businesses, and nonprofit organizations are engaged” (90). Churches working through Caring for Kids have various projects and levels of involvement, depending on the needs of the local schools and the capacity of their congregations. Sample service modes include organizing a backpack drive for students and serving as reading buddies. There is Kids Hope USA (kidshopeusa.org), which is operating in 37 states, with 1,200 church-school partnerships, providing volunteer mentors for local elementary schools (95–97). Refine Church in Cleveland partners with Northwest University “to help Hispanic college students to persevere and graduate” (99). CrossPoint Christian and Missionary Alliance Church in Akron, Ohio, has offered an English as a second language ministry since 2014 (100). Wesley Academy of Music has an outreach ministry for low-income students in Frankfort, Kentucky (94). The academy’s students put on musical theater programs, and students can take private music lessons on their own instruments or ones provided by the academy.

Turning to The Beautiful: Flourishing in the Realm of Creativity, Aesthetics, and Design, I was surprised and delighted to read both the theory and the examples. Sherman quotes Brian Zahnd, stating, “Beauty has a way of sneaking past defenses and speaking in unique ways. To a generation suspicious of truth claims and unconvinced by moral assertions, beauty has a surprising allure. And everything about Jesus Christ is beautiful!” (103). In her own voice, Sherman states that “as we craft beauty, we tap more deeply into our God-given identity,” that “beauty is neither frivolous nor an optional add-on in the Christian life and witness” (107).  Sherman talks about how the arts can build community, strengthen social relationships, and “bring people together for meaningful discussions on universal topics” (105).

We are treated to an extended example from Christ Community Church-Downtown Campus in Kansas City, which has an arts-oriented ministry with its own art gallery and art scholarship, planted in the Crossroads arts district, “sponsoring shows, elevating artists, hosting art talks” (127), offering a larger commission to the artist than standard (70% of the purchase price, rather than the usual 50%). According to pastoral resident Tyler Chernesky, “Congregants have been more willing to invite their non believing friends to CC-Downtown because they can tell them the church is also an art gallery. That piques interest and draws people in” (130–131). He adds that the gallery’s events “and the conversations and relationships they have stirred–have ‘created plausibility for faith’.” He observes that “people in the art world are now recognizing that ‘faithful people can be intelligent, engaged in the city, caring for things beyond their own church. We’re showing them that the Christian worldview is more robust and engaged than a lot of these urban folks often think’” (132). As a lifelong educator in literature, I strongly agree that the arts can provide a meeting ground where those at widely varying points on the religious or spiritual spectrum can draw together in a sympathetic community.

Moving on to The Prosperous: Flourishing in the Realm of Economic Life, I was introduced to the term “biznistry,” a term coined by leaders at Grace Chapel in Cincinnati, a fusion of “the best of business and ministry together” (212). This seems like an intriguing idea, with potential for abuse (wherever money is at stake), but also a considerable possibility of raising the economic condition, dignity, and skills of congregants in financial difficulty and perhaps needing assistance in securing employment.

The chapters on the realm of economic life also include ideas about helping congregants without assets to build them, micro-lending, matching savings, paying off debt, job coaching education, resume and interview preparation, creating a business (snow removal and lawn care, for example) to employ needy people who can work—a myriad of ways to help congregants increase their economic capacity. Again, these ministries are not oriented to helping white-collar workers get richer; they are oriented toward helping those at the lower parts of the economic scale but also including those with the capacity to start small businesses.

Even though this is not a short review, I am only doing a flyover of all the ideas contained in Amy Sherman’s excellent book. Reading her book will give anyone concerned about ministering to their local community a greatly expanded philosophical perspective on ministry and a wealth of examples of how different churches are conducting creative and community-attuned ministries, adding recognizable and much-appreciated value to their neighborhoods. It is a new year, a time for taking stock and making resolutions. Let’s see what we can do to be Christ’s Agents of Flourishing.