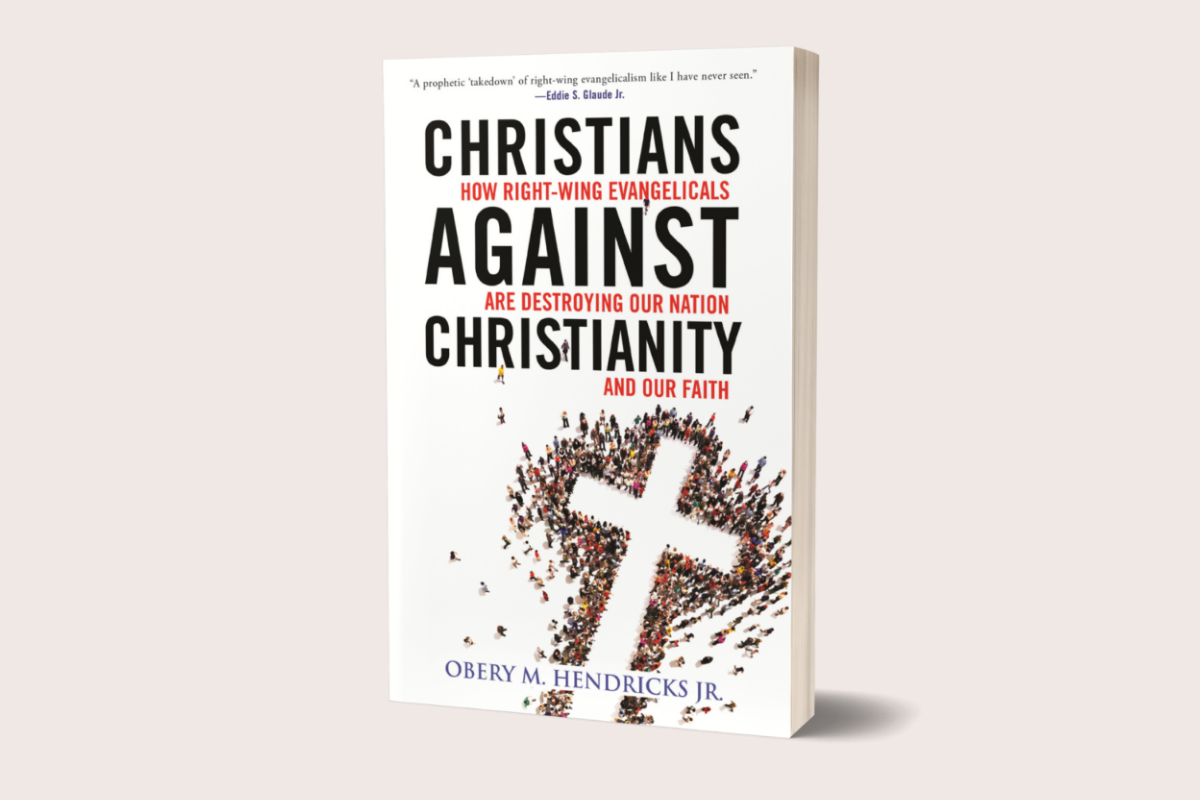 Christians Against Christianity: How Right-Wing Evangelicals Are Destroying Our Nation and Our Faith, by Obery M. Hendricks Jr. (Beacon Press, 2021)

Christians Against Christianity hits hard. Really hard. But it is also measured, thoughtful, reasoned, and carefully presented. The style is concise and evidence-based, with research on evangelical leadership, statements and polled positions of right-wing evangelicals, and serious biblical scholarship. According to the book jacket, the writer, Obery Hendricks, is a “best-selling author, an activist, a religious scholar, a former theological seminary president, and an ordained elder in the African Methodist Episcopal Church.” The title/subtitle gives a good preview of the contents. In about 175 pages of content, not counting 30-some pages of notes and index, Hendricks takes right-wing evangelicals to task for:

—their approval of Donald Trump (chapter 1, entitled “We Have No King But Caesar”)

—their “dangerous misappropriation” of Jesus (chapter 3)

—their stance against gay rights and gay people (chapter 4)

—their demonization of immigrants and Muslims (chapter 5)

—their unbalanced obsession with abortion (chapter 6)

—their “unholy alliance” with the NRA (chapter 7)

The standard right-wing evangelical position in each of these areas is established and contrasted with what Hendricks considers to be the core position of the Bible regarding how we should treat others—which Hendricks centers on “love-your-neighbor-as-yourself,” part II of the Great Commandment, and the parable of the sheep and the goats (Matthew 25), where people are admitted or denied entry to God’s kingdom based on how they treat those in need. After quoting these two passages, Hendricks writes, “It is my fervent belief that to be fully true to the faith, Christians must strive to focus and refract every public policy and every deed in the public square through the prism of the values these passages impart,” continuing to say that “believers have responsibility for the health and well-being not only of our personal circles of friends and loved ones but also for the good of all, particularly those in need” (xix). For those interested in how the name of Christ is represented to the world, I would call this essential reading.

In a brief historical overview, Hendricks discusses the history of Bob Jones University, the political story behind the development of the Moral Majority, the cross-fertilization between the Tea Party, libertarianism, and right-wing evangelicalism. He talks about major right-wing evangelicals and their stated positions on specific issues, from Jerry Falwell Sr. and Jr. to Franklin Graham to Robert Jeffress to Mike Huckabee, Anita Bryant, Ralph Reed, Pat Robertson, Tony Perkins, Ralph Drollinger, James Dobson, and others. But this is far from a rant. It is a careful consideration of a number of specific social justice issues from a biblical perspective, and a comparison of those issues with the stated positions of right-wing evangelicals. I was quite impressed with how much solid, thoughtful content Hendricks was able to get into a fairly short book, and I was pleased with how he was able to express nuance within his arguments. Let’s see how that works with three specific examples.

In his chapter “A New Commandment I Give Unto You: Right-Wing Evangelicals, Homosexuality, and Marriage Equality,” Hendricks states that “nowhere in the four gospels does Jesus speak of homosexuality or make any statement that can even be construed as alluding to it” (55). Furthermore, when Paul’s statements are examined “in their original Koine Greek language,” Hendricks states that “exactly what he had in mind is not clear” (55). In the course of the chapter, Hendricks gives a brief history of legal and Christian responses to homosexuality in the United States, presents results of various scientific studies regarding, for instance, rates of sexual abuse and pedophilia among gay people—“no greater than heterosexuals, and perhaps less” (58)—discusses the story of Sodom and Gomorrah and how it has been interpreted, Levitical laws and their social context, the biblical treatment of polygamy and concubinage, David and Jonathan, and Paul’s use of words that can be translated as “degrading passions.” He also considers arguments that disagree with his interpretation. Hendricks’s conclusion, after 23 packed pages, is that “no matter how one understands [all the biblical passages discussed], nothing gives anyone the right to make gay men and women objects of hatred, ridicule, violence, and exclusion,” and that “no one can demonize homosexual people and follow the teachings of Jesus Christ too” (78). This is set as a minimum standard for Christians. Hendricks recommends going farther—but at least this far.

In his chapter “I Have Other Sheep Not in This Fold: Right-Wing Evangelicals and the Demonization of Immigrants and Muslims,” Hendricks begins with a poignant depiction of the needs of migrants and refugees, and how they share much in common with the Israelites of the Exodus. “Just as extending hospitality to immigrants is one of the Bible’s highest ethics,” he says, “refusing hospitality to immigrant strangers is among its major sins” (81). He cites passages from Exodus, Leviticus, Numbers, Deuteronomy, Job, Ezekiel, and Malachi, illustrating the high bar the Old Testament sets for the treatment of foreigners/immigrants/migrants/strangers. After establishing this biblical background, Hendricks cites evidence of right-wing evangelicals’ opposition or indifference to the plight of such people, citing a 2015 poll that revealed that “nine out of ten evangelicals admit that ‘the scripture has no impact on their views toward immigration reform’ ” (85). He cites inflammatory anti-immigrant statements by James Dobson, Jeff Sessions, Ralph Drollinger, and Donald Trump, and talks about how difficulties faced by refugees were increased by the Trump administration, aided and abetted by right-wing evangelicals.

In his chapter “Thou Shalt Not Murder: The Unholy Alliance between Right-Wing Evangelicals and the NRA,” Hendricks recounts examples of gun violence and then moves toward right-wing evangelical support of the NRA and gun ownership and use. He notes how Pastor Robert Jeffress welcomes bringing guns into the sanctuary (119) and how then-president of Liberty University Jerry Falwell Jr. encouraged students to apply for gun permits and hone their marksmanship at the school’s shooting range. He asserts that right-wing evangelicals have adopted the “conflation of God, guns, patriotism, and basic human freedom” from NRA rhetoric (122), also arguing that NRA and right-wing evangelical rhetoric about guns has a white supremacist connection. Further, he asserts that the disregard of gun control, and the associated loss of life, shows the hypocrisy of right-wing evangelicals in fighting for rights of the unborn in the case of abortion (123). Hendricks recognizes that there are occasions when gun use saves lives, but he argues that America’s obsession with gun ownership causes much more harm than good, and that right-wing evangelicals are misrepresenting the gospel in the broad strokes of their advocacy for guns.

Hendricks’s arguments are only summarized here. Much additional evidence, reasoning, and nuance is present in the book itself. Those who would like to read a well-educated and well-presented viewpoint on a number of contemporary issues from a thoughtful biblical perspective would be hard-pressed to do better than examine this book. You may not agree with everything Hendricks says, but you will be better informed and certainly challenged by his exhortation to match balanced biblical guidance with the way we live out contemporary social issues.

There remains the question of the degree of overlap between right-wing evangelicals and Adventism. William Johnson wrote a very helpful article for Spectrum on this topic in August 2019, but the topic could certainly be re-examined two years into the pandemic and one year into the Biden presidency, both of which have had an effect on American Adventism and politics.