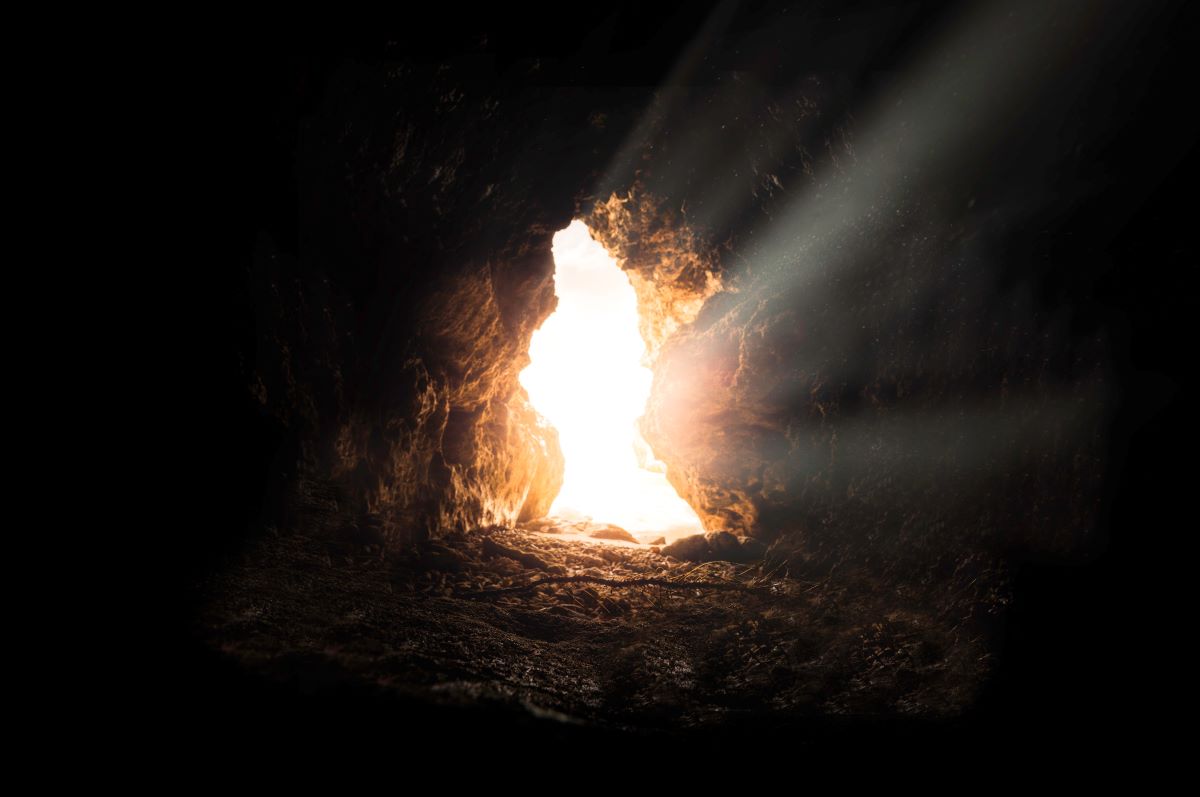 After being wrapped from his feet to his neck in layers of linen interspersed with 72 pounds of myrrh and aloes, Jesus’s battered, lifeless body is lovingly placed onto a two-foot-wide shelf chiseled into one of the stone walls of Joseph’s elaborate tomb.[1] A “sudarion” or handkerchief sized cloth, is placed over the Lord’s face.[2] (John 20:7)

As the red/orange sun approaches the horizon, those present struggle to roll a large circular stone into place to seal the tomb from animals and enemies.

When the sun finally disappears, the interior of the tomb descends into inky blackness. The temperature inside drops and the terrain contracts. Mother earth seeks to cocoon her new resident.

Inside Jesus’s cave-like grave, various smells blend and co-exist—damp moss, musky dirt, musty lichen. Small dots of mouse dung collect in one corner. A spiral cobweb clings hopefully to a slight protrusion. A small snake coils up tighter to conserve heat. Drops of water from a distant spring leak through a rock crevice and drip rhythmically onto the dirt floor with the regularity of a drumbeat. A wild dog can be heard sniffing and scratching at the entrance.

After the mournful leave, the bugs take charge of the corpse. Two small spiders explore the Lord’s head under the lovely, white linen covering. One creeps along his purple, lacerated lips, beside the broken nose, in and out of the jagged thorn punctures that rim his scalp, disappearing somewhere in the Lord’s thick black hair. The other spider traverses under the chin, settles in an ear, and starts to spin.

Our Lord’s corpse slowly cools approximately one and a half degrees per hour until it reaches the temperature of the tomb itself. The cooling begins in the outer layers of skin and eventually works its way into the body’s core.[3]

Livor mortis, which literally means “the color of death,” is a growing discoloration of the skin caused by the settling of the blood once circulation ceases. Gravity pulls the blood downward. Reddish-purple blotches appear on the underside of Christ’s body. After six to eight hours the blotches begin to merge.[4]

Rigor mortis starts two to three hours after Jesus’s death, as glycogen in his cells is converted into lactic acid. The stiffening of the body affects the small muscles around the Lord’s face and eyelids first, then eventually works its way into the larger muscle groups.[5]

By Saturday morning, more tiny creatures inside the tomb become aware of the corpse’s presence and are drawn to explore its fascinating dimensions. Meandering up the rock face from below, they feel along the surface of the wrappings and stumble awkwardly as they attempt to negotiate the slight mounds and crevices created by the process of layering. After a meandering trek, a dozen bugs pause at the area above Christ’s chest, compulsively cleaning their antennae. Three worms sense the excitement and head to the shelf to join in.

Saturday afternoon the rhythmic tread of military feet marks the arrival of a hundred Roman soldiers around Jesus’s grave.[6] Just outside the entrance a centurion barks out orders, “Bring up that rope and wax. You four men, secure these cords across the stone and seal it. There won’t be any bodysnatching on my watch.”

The inhabitants of faraway Heaven are especially attentive to the unfolding drama. All eyes are riveted on the garden scene. All hearts are captivated. Hours and minutes drag by as they eagerly anticipate upcoming events. The walls of the Holy City are draped with banners that welcome him home. The angelic choir rehearses one last time. Trumpeters practice hitting their impossibly high notes.

That evening, the ground around Jesus’s tomb creaks and moans, anxious for someone to deliver its unexpected, royal occupant.

Inside the tomb, muffled, indistinct sounds from the soldiers’ bivouac echo faintly. The shouts of stern commands. The clanging of metal weaponry, helmets, pots, and horse harnesses. Boisterous laughter as the evening wears on. At midnight, the next shift of guards replaces the first.

At 4:30 a.m. Sunday morning, one hour before dawn, everything changes dramatically when the angel Gabriel is finally dispatched to the garden. As he nears, lightening sets the moonlit sky ablaze with shafts of bluish yellow radiance. Booming thunder painfully assaults the ears of the soldiers surrounding the tomb.

When the head angel touches down, a profound earthquake shakes the ground like a dog shaking off water. Rocks tumble, trees crack open, limbs snap off. War-hardened soldiers stumble and fall, toppling on one another in heaps, screaming like helpless babes. Jesus’s body rocks back and forth on its narrow, undulating shelf. Part of the rock ceiling near the Savior shakes loose and drops to the dirt floor creating a cloud of dust.

As seen from inside the grave, Gabriel’s luminescence causes the edges of the covered entrance to burst into a halo of light like the shimmering corona of a solar eclipse.

The large stone, designed to seal in the Lord of the universe forever, is rolled to the right with the flick of a finger. Gabriel’s glory now fills the inside of the cave. At the pinnacle of this immense, pivotal drama, he calls to Jesus with the rich voice of great authority, “Son of God, come forth; thy Father calls thee!”

A divinely generated electro/chemical current immediately surges throughout Christ’s body. In a fraction of a second, the Savior comes back to life. Inside every cell, metabolic processes are re-awakened. Bone fractures in his skull are mended. New cells bind up scabbed over wounds and fresh skin overlays them. Discolored bruises take on a natural hew. Blood flows. Capillaries expand. Organs instantly start pumping, churning, and filtering. Billions of neurons start signaling each other again.

Jesus awakens, shakes off the face covering, squints at the intense glow within the cave, then opens his eyes fully. The Savior easily escapes the tight, neck-to-feet wrappings. He looks at the opening of the tomb and smiles. The Lord of the universe steps down off the man-made ledge, bends low and makes his way out into the dazzling light.

As Christ enters the garden graveyard, the heavenly choir bursts into anthems of victory and praise. Trumpets blare. The Son of God glows more brightly than at the transfiguration, causing every tree, shrub and leaf near the tomb to shimmer in reflected brilliance. The sky is turned into a massive grid of kaleidoscopic flame. The Earth trembles under its Maker’s tread.

Above the din, Jesus’s rich tenor voice rings out in clear, penetrating tones, “I am the resurrection and the life!”

On that unforgettable Sunday morning, the Son of God essentially announces, “I will now take back my life, and no evil angels, no soldiers, no stone, no wrappings, not even death itself can keep me one second longer in this wretched grave. God calls me and I must be about my Father’s business.”[7]

[2] Bible Hub/Strong’s Concordance, https://biblehub.com/greek/4676.htm; Brain Chilton, “Why Was the Head Cloth of Jesus Wrapped to the Side?” April 19, 2019, https://crossexamined.org/why-was-the-head-cloth-of-jesus-wrapped-to-the-side/