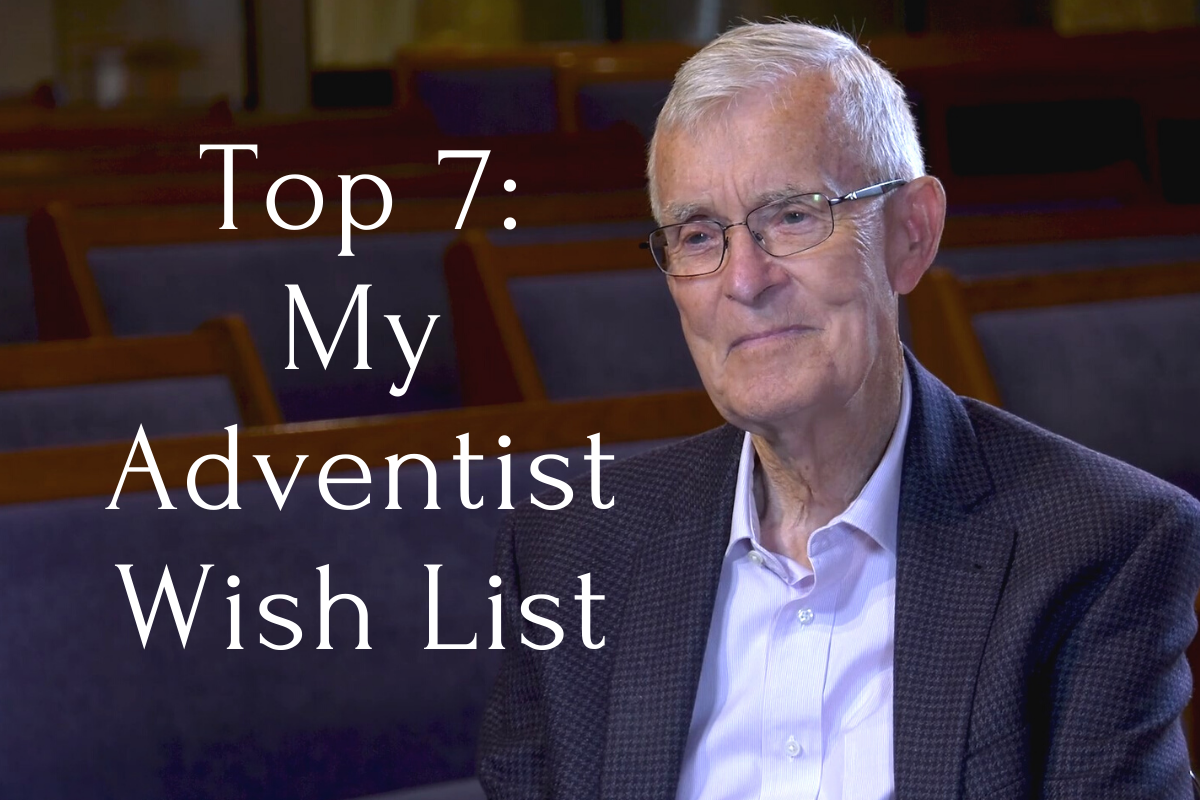 ‘Tis that time of the year when people make lists and check them twice. So, here is my top seven for the Adventist Church.

1. Cheer the people on. That was the signature advice of Pastor W. A. Spicer, president of the General Conference a century ago. Speaking to pastors, he encouraged them to understand their role as cheerleaders, not guardians, and certainly not policemen.

I wish that all our leaders, beginning with the General Conference president, would follow Spicer’s advice. How refreshing it would be if every message coming out of Silver Spring or from the pulpit would echo the apostle Paul: “I thank God for you” (1 Cor. 1:4; 2 Tim. 1:3). Check out Paul as a cheerleader: see how in his letters he affirms the people, commending them for their spiritual growth and faithfulness (Rom. 1:8; 1 Cor. 1:4-9; Eph. 1:15-16).

And, of course, it began with Jesus of Nazareth. He understood his mission to be bringing good news to the poor, healing to the broken, and announcing the year of the Lord’s favor (Luke 4:18, 19). Jesus was cheerleader par excellence.

The Adventist Church today is big and global. Members live in almost every country, under vastly diverse conditions. And we own and operate a network of hospitals and clinics, as well as a global education system. Affirm the people. Affirm all that doctors, dentists and other health-care workers do. Affirm the teachers, the professors, the college and university presidents. Affirm those who teach in small, one-room elementary schools. Affirm the parents, especially the single moms and dads.

Cheer the people on!

2. Jesus is Enough. I wish that every piece of Adventist literature, every sermon, every video, would sound loud and clear that Jesus is enough, now and eternally. That his death on Calvary flung wide the gates of heaven. We can never add to what he has done, nor should we attempt to do so. Hear the prophetic word written to a brother doubting whether or not he would be saved at last: “You will come up from the grave without anything, but if you have Jesus, you will have everything. He is all that you will require to stand the test of the day of God, and is not this enough for you?” (Ellen White, Evangelism, 243.3).

3. The Tapestry of Adventism. There’s no other church quite like ours, so complex, so multi-hued. It is, as Pastor Paulsen liked to say, a tapestry—many-hued, intricately woven, beautiful. I wish that this tapestry would be big enough to include every person on earth so inclined, regardless of race, gender, social standing, or sexual orientation. By his death, Jesus battered down the ancient walls that divided, and still divide, people from one another. He accepted everyone—every one! Let’s not build up walls again.

4. Affirm women and children. The Man of Galilee loved everyone, especially those looked down upon by the religious leaders of the day. He was a man for all people, welcoming tax collectors, prostitutes, lepers, and assorted sinners. He called all back to their high calling as sons and daughters of the living God; he gave them a sense of belonging.

He had special regard for women and children. He welcomed them, affirmed them, commended them. To those who would turn them away, he gave a sharp correction, making clear that for these “little ones” the kingdom of heaven had come.

I wish that Adventists—our leaders, our pastors, our congregations—would affirm women. I wish that those women whom the Lord has called into gospel ministry—for the Lord makes no distinction between women and men in his calling—would be affirmed and encouraged. And I wish that all children would be noticed, loved, and nurtured.

5. Embrace the world around us. I believe that God wants us to become involved with the world instead of shutting ourselves off. We sing, “This is my Father’s world”; let’s embrace it as Jesus did. I wish we Adventists would talk less and practice what the Scriptures demand: to do justice, to love mercy, and to walk humbly with our God (Micah 6:8). The Scriptures call us to defend the orphans, to feed the hungry, to relieve the oppressed, and to lift the heavy burdens of our neighbors. How I wish that the hours we spend discussing, arguing, and quibbling over doctrine might instead be devoted to hands-on work to uplift humanity!

6. Restore the hope of the Second Coming to its right place. We live between the times, between Christ’s first appearing and his return; we must not emphasize one to the detriment of the others. I interviewed that Adventist hero, that saintly, wise man of God, HMS Richards, during his last visit to Washington, DC. It was an unforgettable conversation that lasted for hours. At one point he said, “Brother Johnsson, never separate the cross and the cloud. Many Christians focus on the cross but neglect the cloud—Jesus’ second coming. We Adventists tend to err in the opposite direction.”

I wish my church, beginning with the General Conference and the pastors, would restore the teaching of the second coming to its rightful place. I wish I heard more about Jesus and less, much less, about Sunday laws and 666, Roman Catholics, the Pope, and crazy conspiracy theories. Here’s something that may surprise you: the 28 Fundamental Beliefs contain nary a word about Sunday laws, 666, and all that stuff.  Why are we obsessing about these ideas that are not, and never have been, part of our fundamental beliefs?

7. The message of a God of love. Anciently God’s people heard this good word: “Behold your God!” (Isaiah 40:9). That’s what we need to hear today, from our pulpits, from the General Conference, in our Sabbath school lessons, and in all our publications. It’s the message that desperate, dying men and women need to hear. And, according to Ellen White, it’s the very last message to be given to the world. Not the three angels, not Sunday laws, not Roman Catholics. Only this: “At this time a message from God is to be proclaimed, a message illuminating in its influence and saving in its power. His power is to be made known. Into the darkness of the world is to be shed the light of His glory, the light of His goodness, mercy and truth. . . . The last rays of merciful light, the last message of mercy to be given to the world, is a revelation of His character of love” (Christ’s Object Lessons, 415).

That’s my wish list for my church. What is your top seven?

William G. Johnsson is the retired editor of Adventist Review and Adventist World magazines, and the author of numerous books including Where Are We Headed? Adventism after San Antonio (2017) and Authentic Adventism (2018).