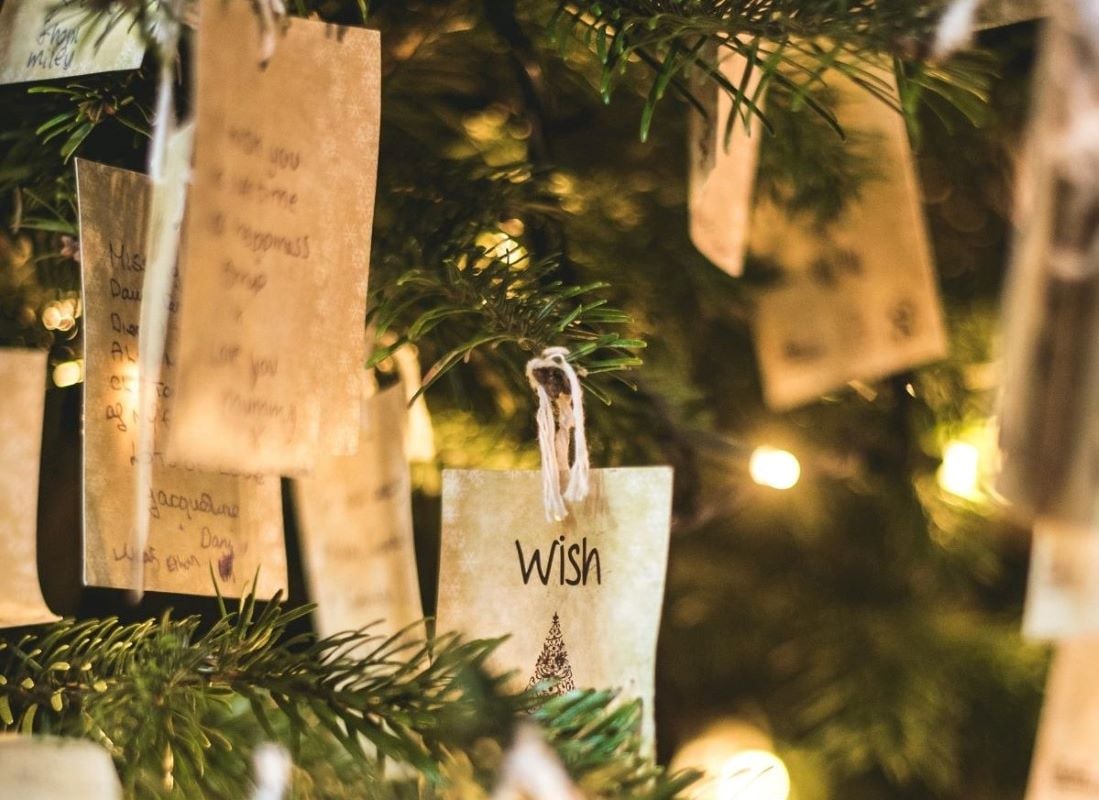 When I grew up, making a list of what us kids wanted for Christmas was the foundation on which the entire holiday celebration was built. My brother, sister and I knew we couldn’t get every item, but that made it all the more compelling and mysterious.

Our lists were supposed to be completed by December 10 so mom could mail them to Santa. Mom always insisted that we include the page number in the enormous Sears and Roebuck mail order catalogue where each item could be found. That seemed a bit curious during the early years when I still had faith in the largess of St. Nick. Nonetheless, on Christmas eve I faithfully left two cookies and a glass of milk and marveled when they were gone the next morning. I usually chose oatmeal-raisin out of concern for the old man’s obvious weight problem.

The lead-up to the big day was characterized by an escalating sense of excitement. I went to sleep each night to the soft orange glow of an electronic candle in my window. Artificial trees didn’t exist in the 1950s, so each year we trapsed into the snowy woods to find the perfect tree. I loved bringing up the same old bulbs, lights, and garlands from the cellar, with a benevolent looking angel for the top. The finishing touch was to carefully drape tinsel over the tip of each evergreen branch. Mom sternly warned, “No tossing tinsel in bunches!”

We lived in an old two-story house with all the bedrooms upstairs. On Christmas morning, after turning on the light in the upper landing, you could see our bulging stockings down below hanging side by side on the back of the front door. We were allowed to retrieve them after 5:00 a.m., but we swore by all that was holy not to look toward the living room where the tree and gifts were located.

An hour later, dad would yell up the beloved refrain, “Well, I guess Santa didn’t come this year.” That was the signal. We flew down the stairs. My parents were experts at staging the scene. They always left each child’s biggest gift unwrapped, so it glowed in the multi-colored light from the tree. I cannot adequately convey the wonder of rubbing the sleep out of your eyes and staring at a new bike, or a drum set, or a chemistry lab, or that game you put on the list as a long shot. Utterly magical. The list had worked again!

At about age six, I transitioned into what I now call the “post-Nick” period when I learned from childhood buddies that parents were the real Christmas gift givers. The news came as quite a shock for a true believer. But, as my friends pointed out, there were some serious logistical problems that should have been glaringly obvious.

First, the sleigh was much too small. The flying reindeer should have been pulling at least five or six large cargo containers. But, of course, then they would crush every roof they landed on.

Second, not every home had a chimney, especially in apartment complexes.

Finally, there were too many homes to visit. Just the homes of the kids in my school would take twenty-four hours, minimum. Plus, I knew someone who went to an entirely different school where there were probably lots of un-naughty kids with lists of their own. Not to mention my cousin Robert who told me he was from a place called Texas. I figured there had to be at least one school there too—maybe more.

With my new knowledge about our true benefactors, I simply addressed my list to “Mom and Dad” and saved the cost of postage.

I hate to say it, but a couple of years later, in an act of personal insanity, I refused to make a list. I still don’t have any clue why. From some dark place deep within the recesses of my billions of neurons, there emerged this craziness. Yes, list making could be challenging, but to leave it all to chance! To enter the greatest of all holidays completely list-less! Mom pleaded with me right up to December 10, but my mind was made up. “I refuse!”

Remarkably, on Christmas morning I still received gifts. I should have been exceedingly grateful, but instead I chose to label them all as unfit. Nothing that I really wanted. After the last gift was opened, I shouted angrily, “This is the worst Christmas ever!” and stomped upstairs.

I didn’t consider that I had left mom no choice but to guess and in my selfish, sulky view she had guessed wrong. Neither did I know that dad worked two jobs during the entire month of December to pay for our gifts. I thought he was simply saving up for something personal.

For years afterward, I felt badly whenever I reflected on the Christmas I chose to ruin. I had taken the highpoint of our year as a family, this precious time together, and stomped all over it.

Much later, after I had married, settled into a career, and had my own child, I was pondering what to get my parents for Christmas. I decided that even though I had said I was sorry soon after my long-ago outburst, it was not based on what I now knew about the extraordinary effort my parents expended to make that holiday special for us kids. So, I sat down and wrote a letter recounting the incident in some detail and apologizing more earnestly.

I had the letter printed on fine paper and framed. I then wrapped it carefully and sent it off to Massachusetts.

I phoned my parents Christmas afternoon. I thought the letter would be the first thing they talked about, but they never even mentioned it. Was it too painful for them still? Had it opened an old wound? Finally, I asked, “Hey mom, did you guys get that framed letter? Did you read it?”

“Oh that,” she replied. “Frankly, neither your father nor I can remember anything about it.”

I paused. Taken aback. Tears welled up in my eyes. The sentence, “Can’t remember anything about it” reverberated in my head. Two other words, “grace” and “love,” suddenly came to mind.

I muttered, “Oh, I just thought it was time for a better apology.”

“Well, give everyone a hug for us,” Mom replied softly.

And that was it.

Whenever I think back on that Christmas letter and my parent’s reaction, I can’t help but ponder anew a particular verse in the book of Jeremiah, “I will forgive their sins and I will no longer remember their wrongs. I, the Lord, have spoken.” (Jer 31:34 GNT)

Now, after I ask Christ for forgiveness for some badness, I picture myself raising the issue to the Lord sometime later and Him replying quizzically, “I’m sorry, but I honestly don’t know what you’re talking about.”

Photo by Valentin Petkov on Unsplash