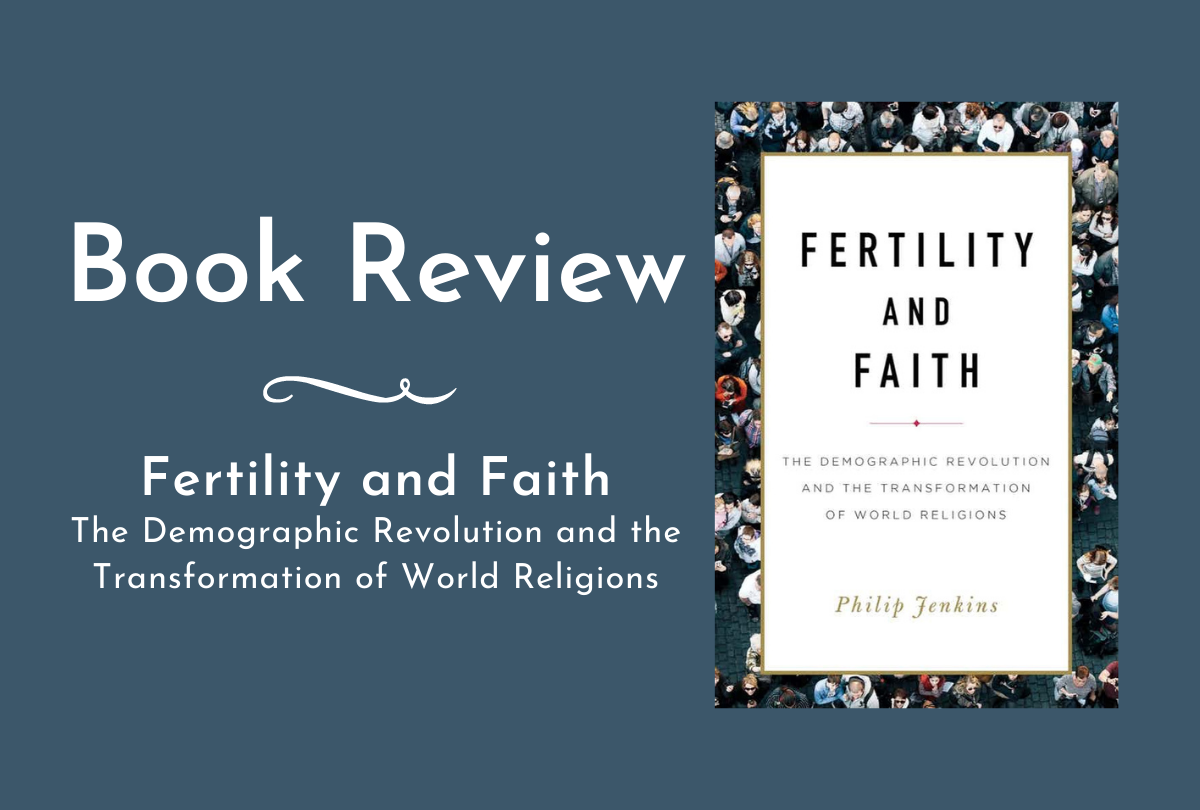 Fertility and Faith: The Demographic Revolution and the Transformation of World Religions by Philip Jenkins (published by Baylor University Press, 2020, 270 pages).

One of the most distinguished historians of religion is Philip Jenkins, professor of history and director of the Institute for Studies of Religion at Baylor University, whose prolific and influential writings have probed a wide variety of topics. Books such as his highly influential The Next Christendom: The Coming of Global Christianity (2002, and now in its third edition) probe how world Christianity was decidedly shifting to the global south and would look very different from the north.

Now Jenkins argues that there is a “direct relationship” that exists between fertility rates and “that society’s degree of religious fervor and commitment” (3). These changes are historically unprecedented. In the 1960s, there was widespread fear about the overpopulation of the planet (19). Yet in the intervening time, especially from 1965 to 1985, the amount of such change is “almost inconceivable” with huge shifts in cultural perceptions about contraception, divorce, abortion, and homosexuality (63). The reasons behind this fertility decline are complex and include dropping rates of infant mortality, social and ideological factors, new ideological attitudes, levels of wealth, and even developments in technology and medicine. In turn, these complex and powerful forces have contributed to significant declines in birth rates, with corresponding profound implications for religious life and behavior. For example, when a society falls below a replacement rate (typically 2.1 births per woman or what is known as the Total Fertility Rate [TFR]), it is “likely to face a steep decline in institutional religious forms, and often of religiosity more generally” (12).

A major theme of this book is the role of women. “The demographic revolution is above all a gender revolution” (10). Women’s increasing opportunities for education, employment, and access to contraception have been a major driver behind this fertility decline. “A substantial scientific literature now amply confirms,” he writes, “that women are more religious than men, and that distinction holds good across societies, so that any loss of female adherents has a uniquely damaging effect on a church or institution” (11). With aging populations, it is significant that women tend to outlive men (29).

This decline in fertility extends beyond Christianity to encompass other world religions, most notably Islam. The country of Iran, which had a TFR of 6.5 in 1982, has declined to the sub-replacement rate of 1.7 today (23). In other words, the secularization with corresponding declines in birth rates seen in western Europe is being observed in many other parts of the world. Even Africa and South America, with historically high TFRs, are witnessing significant TFR declines. Population growth has and will continue to reshape the global religious landscape. For example, in 1900 Islam had an estimated 200 to 220 million adherents (approximately 12-13% of the world population). Today there are an estimated 1.5 to 1.8 billion Muslims making up a quarter of the global population. Similarly, growth in Africa means that this continent will contain both the world’s largest Christian nation and the largest concentration of Christians on the planet for the foreseeable future.

Pastors need to give careful consideration because these trends have and will continue to shape the Christian church in profound ways. For starters, Jenkins argues that for the Christian church to survive into the future, it must take seriously an egalitarian approach for women (191). As populations age and therefore are sustained by increasingly older populations, the church must take seriously a theology of aging along with corresponding implications for spirituality—by 2030 those over 65 will outnumber the nation’s children (194). Perhaps most startling is the rise of the Nones, which in recent years make up 26% of the American population (103). The Nones are not merely secular, since Jenkins notes that research shows they are a surprisingly religious community (105). Instead, they are disenchanted with institutional religion. A new generation sees the Christian church as hopelessly patriarchal, hidebound, and out of touch with contemporary realities, making the church in effect indefensible (65).

In conclusion, “the lower the fertility rate, and the smaller the family size, the greater the tendency to detach from organized or institutional religion. Fertility rates provide an effective gauge for religious behavior and commitment, and rapid changes should serve as an alarm bell about incipient secularization and the decline of institutional religion” (3). The bottom line: every pastor should read this book and reflect carefully on how these changes have and will continue to shape the Christian church.

He co-hosts the “Sabbath School Rescue” and “Adventist Pilgrimage” podcasts.