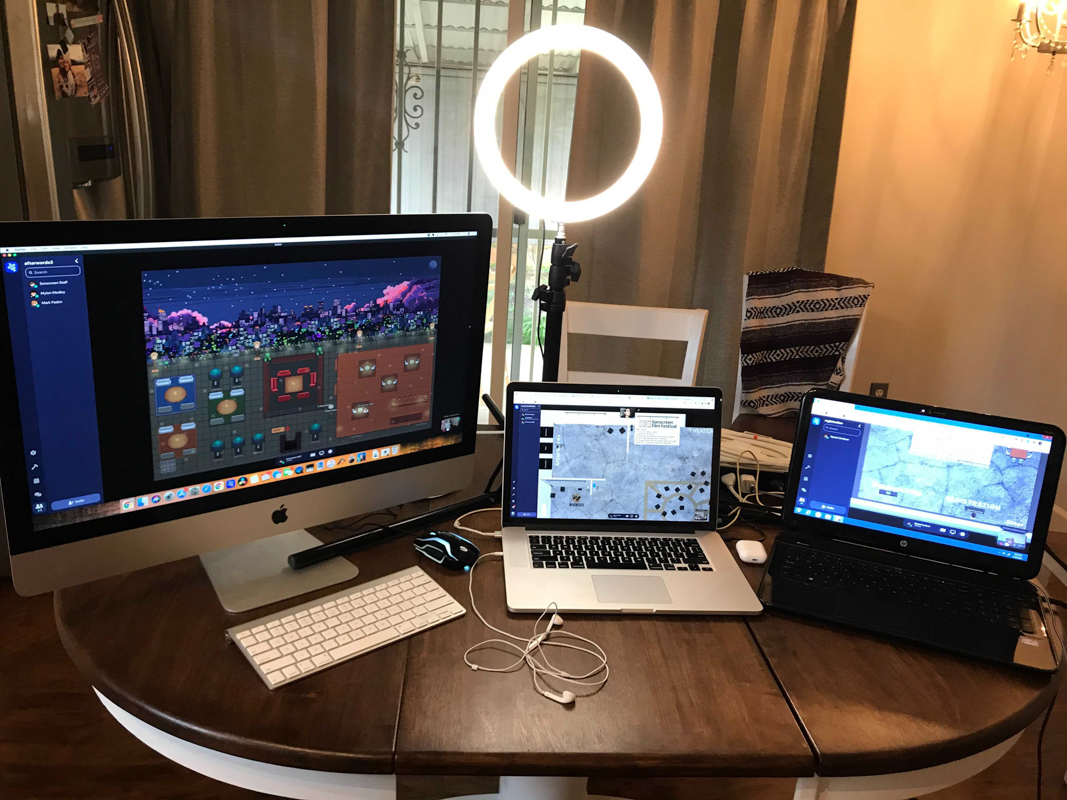 The annual young adult film festival sponsored by the North American Division became an extended virtual experience through a six-session-long program on Gather.town, a customizable video-conferencing space that allowed for enhanced virtual interactivity among attendees. Sonscreen Film Festival 2021 took place every Friday, from April 2 to May 7, from 4-6 p.m. EDT, on the gamified platform that has been described as a combination of Zoom and the “Among US” video game.

Gather.town allowed participants to join the festival as avatars and interact with other attendees in a more natural manner with ability to “walk away” as well as have group and/or private conversations.

“In Spring 2020, Sonscreen led the way in being the division’s first event to quickly and fully transform into a virtual experience due to the pandemic. We built on the momentum from last year’s festival to pioneer another ‘first’ for the division — a uniquely interactive six-week event that allowed for intentional, seamless interactions between presenters and other filmmakers,” said Julio Muñoz, director of Sonscreen, and an associate director of NAD Communication. “We’re so proud of how it all came together.”

The Sonscreen “Metropolis,” or customized Gather.town virtual space, was created by Tanya Musgrave, Sonscreen operations manager and freelance filmmaker, who’d first explored the platform for her previous employer and was able to roll over the basic design for Sonscreen to give the festival a head start.

“With Sonscreen, we’re always striving to have more representation of various life experiences both in our film selections and with the voices who are shaping the festival. This year, it was so refreshing to have five women on our planning committee who offered their highly skilled expertise and passions to make this program a success,” added Muñoz. 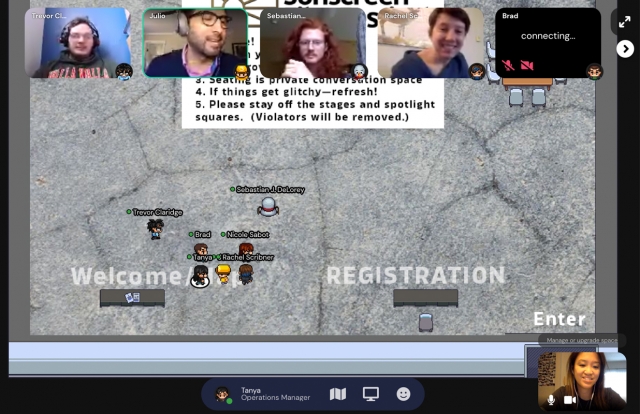 Students and Sonscreen organizers gather in a “private conversation” on Gather.town in March 2021. Photo: screen capture of Gather.town

Every week, 30-60 users attended the program, which took place in a “movie theater” equipped with seats, a stage, and video player. Participants also had the opportunity to utilize designated spaces — including a lounge area, an outdoor camp, and a rooftop — for engagement with presenters and fellow attendees.

The platform on Gather.town was listed as a highlight for several attendees who participated in anonymous feedback surveys: “I really enjoyed ‘running’ into friends I had not seen in a while. It was nice to catch up. I also noticed a bit of networking taking place. Awesome for a virtual event,” shared one attendee.

Another said, “This [feels like] a gamified convention space. It mimics meeting people seamlessly. Starting and ending conversations this way is fun and very functional.”

Organizers also created a Sonscreen Discord Server that gave attendees another opportunity to connect outside of the festival.

There were significantly fewer films produced and submitted to the festival this year due to limited accessibility to film studios, classrooms, and edit rooms throughout the school year at various Adventists colleges.

“With last year’s festival, many students had already completed their films, or only needed to do minor final edits before the pandemic, which meant they could submit their films by our deadline. We knew that wouldn’t be the case this year,” said Medley, who served as Sonscreen senior programmer. “We were pleasantly surprised to receive 23 films for consideration.”

“Each year, I’m always impressed by the filmmakers for their creativity and drive, and this year was no exception. They were able to successfully navigate ongoing and evolving restrictions to bring their unique stories to life. They should all be extremely proud of their work,” Medley added. 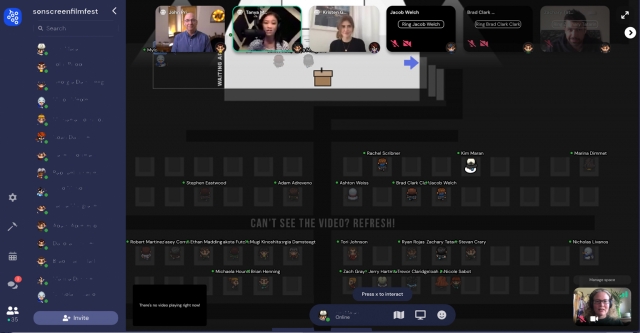 Attendees of the 2021 Sonscreen Film Festival listen to representatives from the Windrider Institute, including its CEO and co-founder, John Priddy (left). Photo: screen capture of Gather.town

The student films were screened over the six sessions. Medley also moderated Q/A sessions that included questions from the audience with the filmmakers at the end of designated film blocks, giving the filmmakers the opportunity to share their inspiration, techniques, and insight from their respective projects.

“The ‘in-person’ Q&A sessions were great. I like being able to interact with people in a way a little more interactive than Zoom,” said another attendee.

There were 16 official student film selections from Walla Walla University, Southern Adventist University, and Pacific Union College, and three films from high school students. Additionally, there was one professional submission.

Films were submitted in five categories — Art/Experimental, Dramatic Short, Comedy Short, Documentary Short, and High School Short. A jury of six members individually reviewed the films and scored them from zero to 100 based on factors such as directing, editing, pacing, and sound. Due to the fewer number of submissions in every category, members of the jury were the ultimate deciders on how many categories would have winners for honorable mention or best in category.

Through connections facilitated by Musgrave, representatives of the Windrider Institute — a community of filmmakers who form an immersive, educational experience during the Sundance Film Festival — also made considerable contributions to the weekly programs. John Priddy, the CEO and co-founder of Windrider Institute provided one of the keynote addresses. Several professional short films were also screened during the festival, and many filmmakers associated with the films participated in Q&A segments.

“Student films have been and will always be the focus for Sonscreen, but if we can also supplement them with industry professionals who could provide mentorship opportunities and showcase their short films through a partnership with Windrider Institute, students can see the difference between their work and the professionals’ and have a better understanding of what higher quality filmmaking looks like, giving them inspiration as they return to school,” said Musgrave.

One of the missions of Windrider Institute is to create meaningful conservations surrounding filmmaking. While the Windrider Institute is run by Christians, it is not a self-proclaimed “Christian organization.” Members attend film screenings at Sundance, then invite filmmakers to participate in panel discussions that discuss how their philosophical worldviews are displayed in their work.

“I’ve seen people on their panels say things like, ‘I’m not a person of faith, but I really respect what you guys are doing.’ That’s the type of mission I love. I enjoy being available to people who are outside the church,” added Musgrave. “Isn’t that supposed to be our purpose and mission [as Christians], to be a light to others?”

According to Muñoz, representatives of Windrider were so impressed with the undergraduate films that they connected with some of the filmmakers about screening their projects at future Windrider Institute events.

Other noteworthy keynote addresses were given by Ryan Dixon, a Writer’s Guild of America (WGA) screenwriter, and Jude Florido, global marketing manager for HBO Max.

Keynotes and Q&A segments from the 2021 Sonscreen Film Festival can be viewed here.

Organizers also plan to host quarterly sessions that focus on mentorship opportunities with professional filmmakers. Information will be shared on Sonscreen’s Discord Server and Facebook page.

This story originally appeared on the NAD’s website. It is reprinted here with permission. Title Image: Behind-the-scenes look of the desk of Rachel Scribner, Sonscreen technical/logistics manager. Photo: screen capture of Gather.town

Images courtesy of the NAD