The last 14 months of pandemic-induced self-isolation have driven us into our kitchens to bake bread and try out new recipes; to our bookshelves to read (or reread) forgotten books or new releases; and to streaming services to binge-watch movies and television programs.

Those who haven’t yet discovered the treasures offered by Journey Films (JourneyFilms.com) are missing out on a trove that ministers to both emotional and spiritual healthfulness.

Martin Doblmeier, award-winning documentarian and founder of Journey Films, has done for religious documentaries what Ken Burns has done for historical subjects. Over the last 45 years, Doblmeier’s skills as an interviewer, writer, film editor, and documentarian have established him as one of the premier voices for faith and spirituality in North America. His films routinely bridge the gap between religious and secular broadcasting and have been viewed on all the major North American television networks as well as on Public Broadcasting.

Just this year, his film Spiritual Audacity: The Story of Abraham Joshua Heschel won the Religious Communicators’ Council Wilbur Award for videos and film longer than 30 minutes. Heschel is well-known to Adventist pastors of a certain age for whom his book The Sabbath: Its Meaning for Modern Man (1951) was required reading in their university or seminary settings.

“The job of a filmmaker—at least in my space,” said Doblmeier in a 2006 interview,1 “is to explore, not preach.… In spiritual matters, you try to get people to be as curious as possible.” He does that by profiling public figures, who, over the course of their careers, had to grapple with complex and complicated issues of justice, mercy, compassion, and righteousness.

Heschel, for example, dealt firsthand with evil and suffering when his mother was murdered by Nazis during World War II. Two of his sisters died in Nazi concentration camps. Heschel’s understanding of social justice as mandated by the Bible’s Old Testament prophets was appropriated by leaders of the civil rights movement of the 1960s in the United States. In 1965, he participated in the civil rights march from Selma to Montgomery, Alabama, with Martin Luther King Jr. and future U.S. representative John Lewis. Heschel famously remarked: “When I marched in Selma, I felt my legs were praying.” 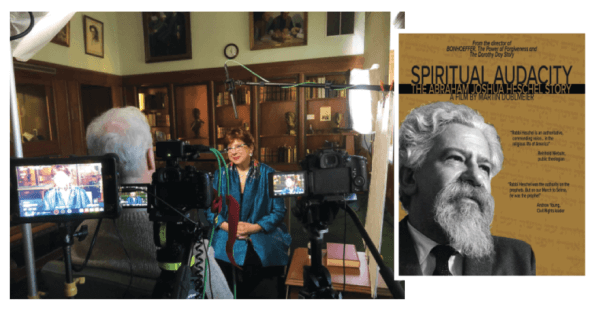 Doblmeier interviews Susannah Heschel for one of his most recent films.

Doblmeier’s first exposure to a national audience came in 2003, with the release of his feature-length documentary Bonhoeffer, a profile of the German theologian and activist Dietrich Bonhoeffer. At a screening of the film in Loma Linda, Doblmeier fielded questions from the audience and was introduced to Seventh-day Adventists, particularly their emphasis on the relationship of health and spirituality.

Over the next 10 years, he released three films that highlighted the health and education ministries of the Adventist Church: The Adventists (2006), The Adventists 2 (2010), and The Blueprint: The Story of Adventist Education (2013). His documentary Chaplains (2016) featured a segment about Barry Black, a Seventh-day Adventist pastor and chaplain of the United States Senate.

Impressed by the Adventist emphasis on the relationship between health and spirituality, Doblmeier said about The Adventists: “What I wanted to say was ‘At the foundation of…the behavior of Seventh-day Adventists in terms of health is this central notion that the body is the temple of the Holy Spirit.’… That, for me, was the central thing.”2

Perhaps Doblmeier’s greatest contribution to the dialogue about religion’s role in society is illustrated in the diversity of his films’ subjects. His film The Heart Has Its Reasons (1984), for which he received his first Gabriel Award, profiled Jean Vanier and his L’Arche communities for people with intellectual disabilities. The Power of Forgiveness (2007) examined the common themes embraced by Christian, Jewish, and Buddhist concepts of forgiveness. It was released just months after five children were killed in the Amish community of Nickel Mines in Lancaster County, Pennsylvania, after which the Amish community memorably forgave the perpetrator’s family.

“What has changed over the years since I started this work is what might be called the ‘religious literacy’ of the average television viewer,” said Doblmeier. “Words like redemption, salvation, and grace may mean different things to different people—or mean nothing at all.”

In recent years, Doblmeier’s Journey Films has released biographical profiles of individuals whose influence was not limited to religious settings. “I find myself captivated by the way someone is moved by their understanding and relationship with God,” he said.

An American Conscience: The Reinhold Niebuhr Story (2017) is a profile of one called by Time magazine “the greatest Protestant theologian in America since Jonathan Edwards.” Arthur Schlesinger Jr. called Niebuhr “the most influential American theologian of the twentieth century.” Doblmeier’s treatment of Niebuhr features interviews with former U.S. president Jimmy Carter, political commentator David Brooks, civil rights leader Andrew Young, and others. The effect is to reinforce the reality that Christians and Christianity are an integral part of society, and that their influence is not limited to weekly sermons or articles published in religious periodicals.

“Many people have been scarred by a negative encounter with a ‘religious’ person or experience,” Doblmeier observed. “I am still confident [that] if the story itself is compelling and of human interest, it will somehow cut through whatever blockage people’s individual histories present.”

In Revolution of the Heart (2020), Doblmeier profiles Christian activist Dorothy Day, who notably quipped, “Don’t call me a saint; I don’t want to be dismissed that easily.” Doblmeier traces her embrace of Jesus’ Sermon on the Mount and how her radical interpretations of Christ’s words earned the ire of both the Catholic Archdiocese of New York and J. Edgar Hoover’s Federal Bureau of Investigation.

“I see it not only as a privilege to share the story with others but an invitation to reflect on the ideas and themes within that story in light of my own spiritual life,” Doblmeier said. “I want every film…to help me see God revealed a little more clearly, to understand my relationship with others more deeply, and to commit myself anew to whatever transformation is needed. Spiritual growth…is about the hard work of honest, ongoing self-transformation.”

The view in the rearview mirror

As he reflects on the societal changes he has observed in his 45 years of filmmaking, Doblmeier admits that not all changes are positive. Yet he remains optimistic. He said in a 2013 interview: “We’re growing more and more impersonal; we’re less civil.… The role for churches in the twenty-first century is to restore the notion that human beings are made in the image of God.”3

In the late 1970s Martin Doblmeier was profiling the Missionaries of Charity, a Roman Catholic order of religious women who live and work in the Bronx, New York City. Not long after Mother Teresa won the Nobel Peace Prize, he received a phone call from the order: “Mother Teresa’s going to be here in a week. We’re going to let you be the only one to interview her.”

During the two days he spent with Mother Teresa, she spoke to him words that are seared into his memory: “God does not call us to do great things; but little things with love.”

Now, 35 films later, he says, “If anything, the years have made me more grateful for the chance to make these films and tell these stories.… As long as God gives me the opportunity, and people are willing to trust me with their stories, I will continue to make films the best way I can.”

This article was written by Stephen Chavez who is retired after a career as a pastor and writer/editor. It was originally published by the Pacific Union Conference Recorder Magazine, and is reprinted here with permission.