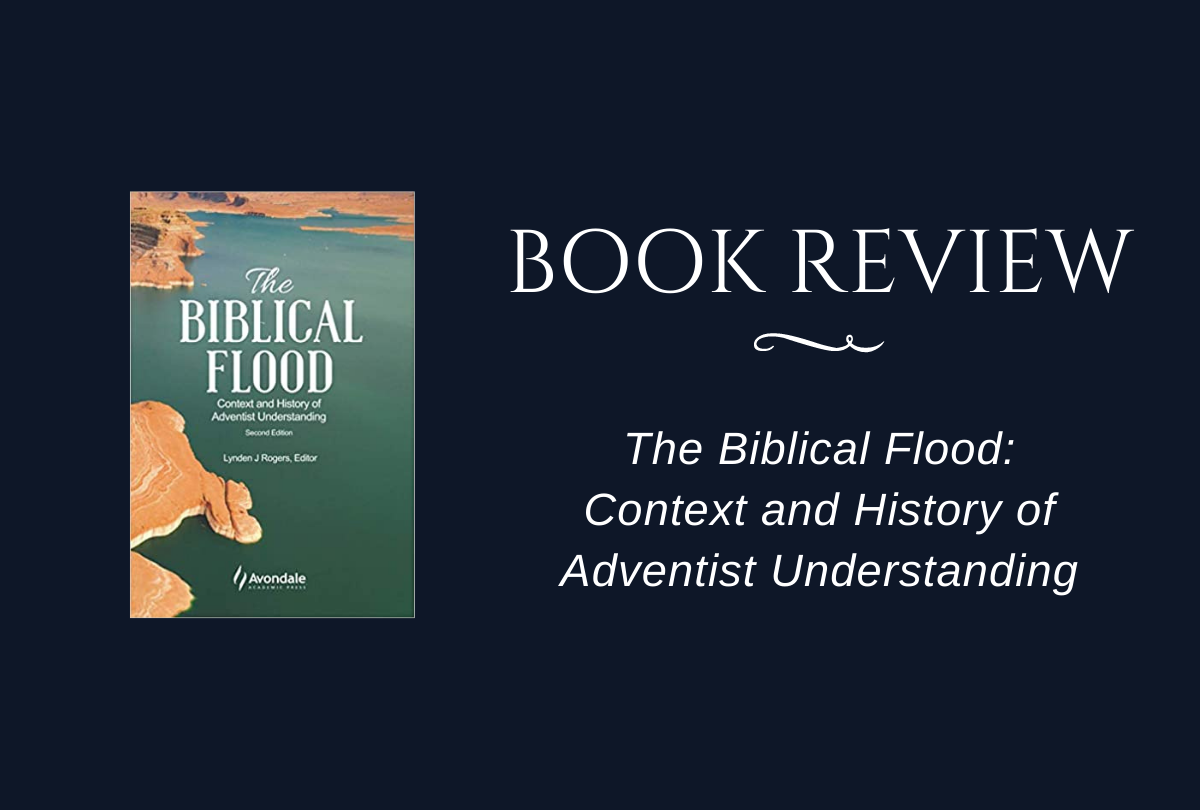 If the Adventist Church believes in “present truth” it should welcome this book. If Ellen White’s fear that in the church “there will be many now as in ancient times who will hold to tradition and worship they know not what” (5T 707) still resonates, the church should value this book. Ellen White might be anxious that a time would come “when no new questions are started by investigation of the Scriptures, when no difference of opinion arises which will set men to searching the Bible for themselves to make sure they have the truth,” but this book shows that that time has not yet come. In the arena of the relationship between Bible and science, this book is one of the best, if not the best, in relating what Genesis says about the Great Flood with what we now know from science. Furthermore, any such book that goes into a second edition within three years has to have found an appreciative readership!

The chapters in this book grew out of a conference on the subject held by the science faculty at Avondale University College in 2016. The first edition of the book was published by Avondale the very next year but contained several errors, so the second edition is not only corrected but considerably updated (and available from Amazon). In the book’s recommendation, former college president (and head of its science department) Geoffrey Madigan says, this book “provides a wealth of information about how Seventh-day Adventists have interacted with the flood narrative and its relation to geology. It traces how emphases have shifted and how focus has changed. It also shows that we miss much if we confine our ‘flood thinking’ to geological questions.”

Telling is the fact that the book is dedicated (in the Preface) to the memory of another previous president of the institution (1971–1980), Eric Magnusson, himself a noted scientist, who, in the mid-1960s, “was instrumental in setting up a unit of study at Avondale in which senior students of science and theology could be exposed to the sometimes contentious interface between these two disciplines in a safe and supportive environment.” Commendably, “this unit continues at Avondale to this day and over the 40-odd years from its inception until Eric’s death in 2009 he retained a keen interest in its presentation and maintained a continuing attentiveness to all aspects of the dialog between informed Christian faith and responsible science.” So it is no accident that this important book comes out of Avondale.

Chapter 1 (“The Historical Development of Theological Perspectives on the Flood”), by Laurence Turner, outlines different approaches to the book of Genesis that have been used by biblical scholars over the last two centuries, right up to the present, including a comparative study of ancient Near Eastern Flood traditions In Chapter 2 (“The Theology of the Flood Narrative: Literary Structure, Biblical Allusion and Divine Characterization”), the same author describes some of the various theological understandings of the Flood that have resulted from a rethink, not only of biblical myth countering Mesopotamian myths, but of the historical relationship between the law and the prophets, and also of their theological relationship. Speaking in theological terms, he presents the Genesis Flood as the undoing of a universal creation; in other words, as an anti-creation narrative. I found especially interesting his proposal that the “entire Flood narrative is a well-conceived palistrophe, or elaborate chiasm, centering on the theological affirmation that ‘God remembered Noah’ (Gen 8:1).” Another interesting observation by Turner is that while American evangelical and Adventist reflection on the Flood narrative is still dominated by historical questions (was it global, what is its date), we are largely missing the fact that it is primarily a theological account, and a profound one at that.

Chapter 3 (“Responses by Christian Scholars to Extra-Biblical Data on the Flood from 1500 to 1860”), by Lynden Rogers, discusses the three major attempts made by well-informed and largely conservative Christian scholars to reconcile a growing body of extra-biblical geographical and scientific data with the biblical Flood narrative. “The heroes of this account did their best to explain the data within a paradigm guided by their presuppositions,” but when their “attempt failed they were able to outgrow those presuppositions. Most importantly they were able to respect and accommodate the scientific data while at the same time retaining their Christian faith.” These attempts, incisively covered by Rogers, constituted a major impetus in the formation of modern geological science and provides the context in which the Seventh-day Adventist Church would later form its understanding of the Flood. Theirs was not the model, however, followed by most Adventists, who insisted on keeping their historic presuppositions.

Chapter 4 (“Early Adventist Understandings of the Flood: Ellen White and other 19th Century Pioneers”), by Cornelis Bootsman, Lynden Rogers, and Kevin de Berg, examines the writings of Seventh-day Adventist pioneers, including Ellen White, Uriah Smith, and Alonzo Jones, exploring the sources from which their ideas may have been derived and their effect on the ongoing Adventist understanding of the Flood. By 1900, the distinctive Adventist views on the Flood had been clearly established by Ellen White and, to a much lesser extent, by other Adventist pioneers, none of whom were educated in, or even familiar with, the geological science of their day. “In fact,” say the authors, “the prevalent attitude to science seems to have been one of disdain.”

Chapter 5 (“Seventh-day Adventism, Geology, and the Flood: An Historical Perspective from 1900 to 2015”), by Kevin de Berg, reviews the twentieth-century outgrowth and development of these early understandings. The author’s thesis is that there were five major nineteenth-century events which would determine how Seventh-day Adventists would react to the findings of geological science in the twentieth century and beyond: 1) Ellen White’s vision on Creation and the Flood in 3SG, 1864; 2) the geological discovery that the Earth appeared to be much older than Ussher’s 6,000 years; 3) the growing recognition that one great catastrophic Flood could not explain the surface features of our planet; 4) the reliability of the geologic column; and 5) the publication of Darwin’s The Origin of Species in 1859. Into this portentous situation stepped George McCready Price, the Adventist tone-setter for the twentieth century, defined for geologists by his New Geology (1923). Later, in 1958, came the founding by the General Conference of the Geoscience Research Institute; important leadership names include Harold Clark, Harold Coffin, Leonard Brand, Robert Brown, Ariel Roth, and others. De Berg says three major hurdles to a biblical interventionist worldview include: 1) the apparent time scale for the Phanerozoic portion of the geologic column; 2) evidence for the development of life by natural processes without informed intervention; and 3) the evidence for the mega-evolution of new life forms.

Finally, in Chapter 6 (“What a Catastrophe! — Science Abandons Uniformitarianism?”), Lynden Rogers evaluates the validity of the “uniformitarianism” charge often leveled at geology over the last century by Flood apologists. The manner in which this story has been told by Adventist authors is described and the key role played in this narrative by Price is noted. Have recent shifts away from uniformitarian paradigms and toward the recognition of violent episodic events as agents of major geological change (“neo-catastrophism”) reflected scientific support for a universal Flood? Rogers says,

Data that indicate violent, even widespread catastrophic events are certainly of interest. They deserve mention and need further study. But even if they are perfectly consistent with what could reasonably be expected from a worldwide Flood they do not uniquely, or even strongly, imply it as the favored option among other widespread, perhaps violent depositional events. More useful for the purpose would be consistent evidence from around the globe, drawn from a range of erosional or depositional phenomena, a very substantial portion of which demonstrated consistencies which suggested a single, recent event.

Rogers recommends considering what Galileo picked up on Copernicus’s idea of judging competing scientific models on the basis of the three Cs: coherence, cohesiveness, and consistency—i.e., those involving the least amount of special pleading.

As Rogers, the book’s general editor, says, “There are clearly tensions between some of the viewpoints presented in these chapters. . . . The authors of this book have to live with such tensions. They are not to be apparently resolved either by doing poor theology in order to accommodate science, or by doing bad science in order to be reconciled to a particular reading of scripture. Instead, we are invited to do more and better work in each area.” And that is what the authors have done and what makes its suggestions and conclusions so valuable.

The book is full of useful tables and figures and has a valuable index; each chapter has copious and well-researched notes. The book will be especially appreciated by those who found useful Understanding Genesis: Contemporary Adventist Perspectives (eds. Brian Bull, Fritz Guy, & Ervin Taylor, 2006) and God, Land, and the Great Flood (Brian Bull & Fritz Guy, 2017), but need something more recent and comprehensive. It should be helpful especially to Christians interested in discovering more about the interrelationship between science and their faith, academics who follow the interaction between science and religion, teachers of science in both secondary and tertiary education, and church pastors and leaders in local churches. For those who wish for an even more comprehensive relating of Genesis to science, many of the same Avondale authors are putting on the upcoming Sydney Adventist Forum Conference (June 11–13, 2021) on “The Age of Life on Earth.” Stay tuned!