Book Review — After Evangelicalism: The Path to a New Christianity 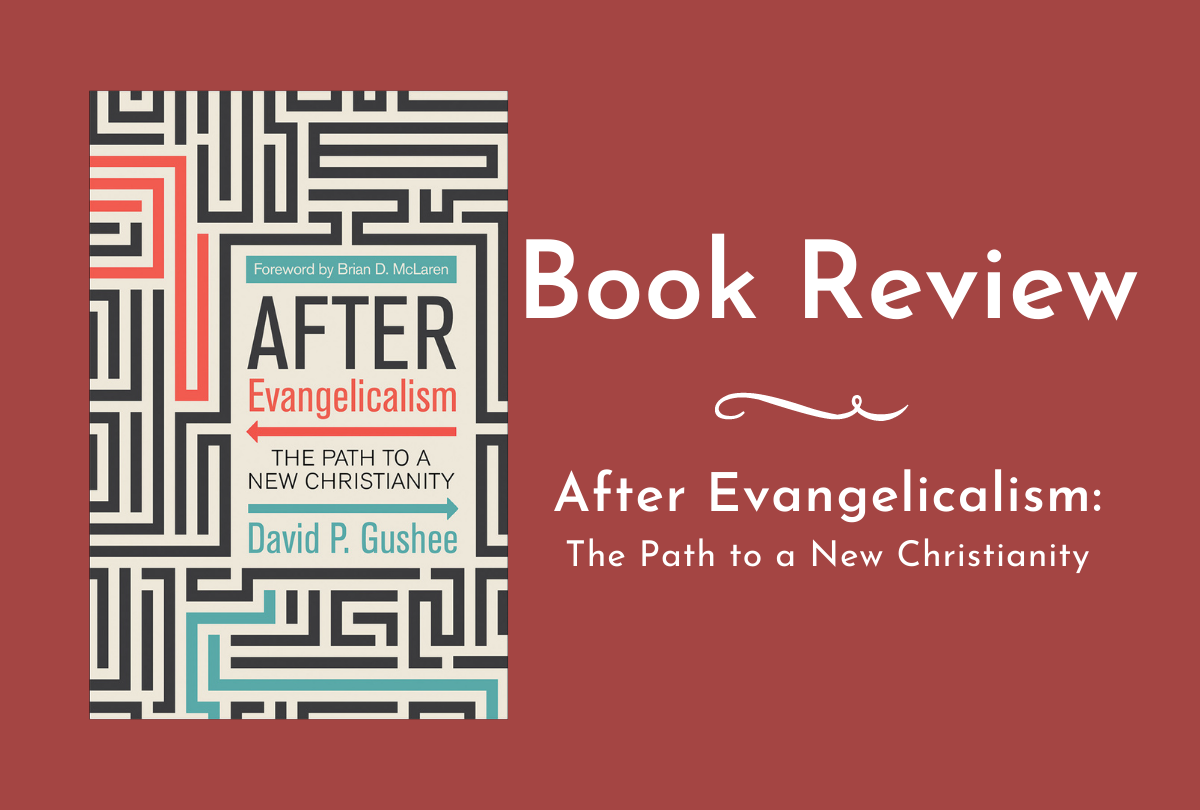 I’m an Adventist, so why do I now feel like an ex-evangelical? This question irked me as I read David Gushee’s book After Evangelicalism: The Path to a New Christianity. Detailing the rise of the evangelical movement in the twentieth century and its success in acquiring sub-cultural Christian dominance and overt American political power, Gushee also shares his own journey along the border and around the centers of theologically conservative white American Protestantism.

This marks about twenty books either edited or authored by David P. Gushee, PhD, who is the Distinguished University Professor of Christian Ethics at Mercer University. He is also the elected Past-President of both the American Academy of Religion and Society of Christian Ethics. His larger scholarly success becomes even more significant when reading his very personal telling of his academic journey which includes Union Theological Seminary and the Southern Baptist Theological Seminary, a rare career pairing that gives him deep perspective into contemporary Christianity and adds a nuanced authority to his biblical, historical, and ethical critique of evangelicalism.

I admire Dr. Gushee in part for his 2018 AAR address “In the Ruins of White Evangelicalism: Interpreting a Compromised Christian Tradition through the Witness of African American Literature,” and I generally agree with his tripartite thesis that American evangelicalism is corrupt and needs a reformation. So why did I feel weird reading his book? First, it's his action. He left evangelicalism. Is leaving a community and criticizing it from the outside an effective method of change? The second reason I became bothered was taking this quiz on page three of about 200. 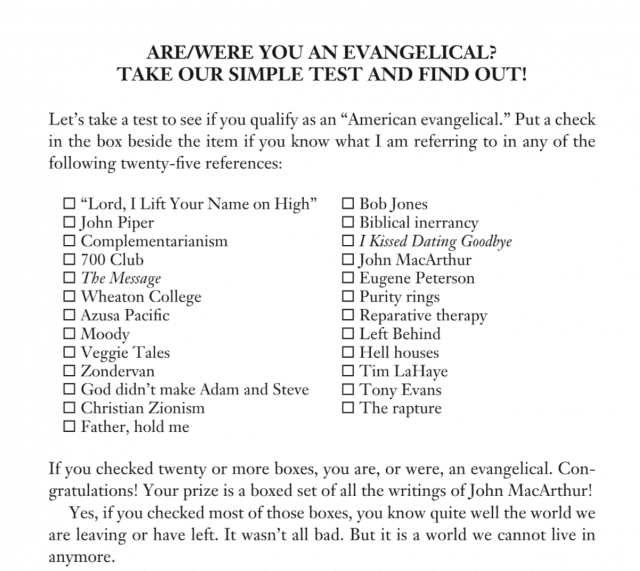 What? I'm in some way evangelical? No! How did this happen and do I now bear some responsibility for these...people? I don’t blame anyone. My caring Adventist parents needed Christian resources while raising boys and Dr. James Dobson offered some daring support if not an extra odyssean adventure. A tiny rebel, I wanted to listen to music with a beat so my first cassettes were from DC Talk, Amy Grant, and Michael W. Smith. I was curious about Christian ideas so after reading C. S. Lewis and then Blaise Pascal as an earliteen some caring adults recommended R.C. Sproul and Francis Schaeffer. But in this process of consuming evangelicalism I couldn’t take their tut-tut apologetic tone seriously. Instead, I would research who they criticized—liberal theologians, continental philosophers, social gospel activists, secular rock and hip-hop musicians, existential literature, and abstract art—only to find that their bugaboos were strawmen.

I guess that’s why Gushee’s argument got under my skin. I never assented to this version of Christianity and yet he showed me that the tentacles of evangelicalism reach deep into my faith journey even as a foil against which I defined myself. The more I reflect on it, evangelicalism mixed with my church and tried to make me, a fifth generation Seventh-day Adventist, into its image.

Evangelicals generally define themselves by personal belief, but in reality the larger movement influenced generations of Christians in and out of many denominations not through spirituality, but through material culture. Too many of us read their magazines, their books, watched their videos and listened to their music. It still crowds out space at our local Adventist Book Centers, filling any possible denominational gap. Difficulty in marriage? Teen trouble? Need a Bible cover that caters to your hobby? Looking for a more graceful devotional? Evangelical heresies about hermeneutics and female subjugation seep in and mix with popular praise music and sermonic cliches repeated by some planted pastors hungry for something like mega success.

Gushee divides the book into three parts. The first covers his own story and the problems of authority within evangelicalism. In what should be obvious to every Adventist, Gushee zeroes in on the heresies of Scriptural inerrancy and infallibility. Beyond sola scriptura?, Gushee asks. "Of course," Adventists should answer. Ellen White provides us with an important example of how plenary inspiration, ecclesiastical realities, peak experiences, intertextual remixing, human psychology, and changing social contexts all can inspire something greater than the sum of its parts. A primarily verbal inspiration limits the divine and Ellen White points us to the wholistically complex—toward meaningful hermeneutical experiences that require, and spiritually reward, critical engagement.

After finishing Gushee’s work, I read a new, thoroughly Adventist book by Stephen Allred, Do Justice: The Case for Biblical Social Justice. A former pastor, including many years at a church working with Doug Batchelor, Allred, now a practicing attorney, artfully weaves in dozens of striking quotes from Ellen White to argue that anti-racist actions are central to Christian righteousness. Although his audience is Adventist, so much of the theology Allred critiques comes from, yes, evangelicalism. Thanks to his approach, reading the following from The Great Controversy struck me in a new way after reading Gushee.

Every secular government that attempts to regulate or enforce religious observances by civil authority is sacrificing the very principle for which the evangelical Christians so nobly struggled (201).

Of course what she meant there by the term evangelical is not the 20th century American movement that concerns Gushee. White is referring to the German followers of Luther in the 1520s, who after their Letter of Protestation at the Second Diet of Speyer in 1529 increasingly became known as evangelical Protestants. Looking back to this longer history of Christianity gives me pause. Those nascent protesters, driven by the convictions of their conscience, like the ones centuries later that concern Gushee, experienced similar lifecycles: from outside to inside, from local congregation to national power. They followed Jesus. All. the way up the mountain only to find the devil there where they succumbed to the temptation to achieve worldly power. As Adventism matures, globalizes, and searches for contemporary relevance, how can we stay true to our ideals and identity and “serve Him only?”

Gushee titles his second section “Theology: Believing and Belonging” and he details how he has stripped the stories of Jesus down to their historical and moral essence. Gushee works past several problematic Christologies I think are more deeply critiqued by Stephen Prothero in his 2004 book American Jesus: How the Son of God Became a National Icon. A essential update for all conversations of soteriology, Gushee does incorporate James Cone’s theological and historical reflections on lynching to provide social context to the meaning of the cross. In the end I think most Adventists could probably agree with Gushee’s gospel or what he calls in chapter five, “Jesus according to Gushee via Matthew.” Why, because it reads a little like a book called The Desire of Ages.

The third part, Being and Behaving, gets real. Instead of parsing his thoughtful takes on sex, abortion, evangelical gender discrimination, white racism, and what went wrong with evangelicals on same-sex marriage, I’ve pounded out five ethical theses:

1. It is deeply rotten how much evangelicals obsess over sex and yet their leaders violate their values habitually. Be very wary of charismatic pastors and doctrinaire administrative leaders.

2. Speaking of pastors, the continued inability for evangelicals (and Adventists) to treat women equally limits our Christian witness in the world. While the voting structure of General Conference Sessions certainly contributes to this plague, the introduction of evangelical complementarianism by some Seventh-day Adventist Church leaders reveals a snake-like spirit of institutional corruption, a legacy that the responsible leaders will bear past their grave.

3. However one parses the difficult issues surrounding abortion, the overriding historical reality is that generations of sensitive Christian consciences have been manipulated and weaponized into becoming political tools of the Religious Right and the Republican Party. To be a single issue voter on this issue or even to make abortion opposition a high priority has been primarily a tool to close faithful minds and turn able Christian sheep into focused lever-pullers for the canus lupus family.

4. Let us never forget all the moral scaremongering and political action against marriage rights for LGBTQ+ folks. A lot of Christians lied, lost, and now they want to be cool and feel forgiven without changing their underlying false assumptions about gender, sex, and the separation of church and state.

5. White evangelicalism lies at the center of the racism problem in America. In overt and covert ways, they overwhelmingly support the structures of oppression that plague this country. For Christianity to last, this original sin must be identified, rooted out, and rectified.

Ultimately my critique of Gushee is this: evangelicalism needs more than people who leave and write exit surveys. Is there room inside for a reformation by protesting evangelicals again?

I’ve poked at Gushee, so here’s some honest critique I give myself. Like him, I trace a similar ethical path over the past few decades: opposition to the Iraq War, moral disgust at state-sanctioned torture, caring for creation, support for same-sex marriage, sharing economic success and creating universal health care access, anti-racism and horror at the Christian culture of white supremacy, support for refugees and immigrants. But it does give me pause that these too neatly parallel a political party’s agenda, even if only through the hard work of activists. Gushee hammers home the point that evangelicals lost Christ as they too closely identified their morality with temporal politics. Therefore, I must always ask: how can I work together with my fellow adherents to keep Adventism in, but not of, the world? In doing so, Gushee reminds me to always remember the example of the prophets, and Jesus, and the prophets of the Civil Rights movement then and now. These witnesses call us to look past the powers that be, to see, what we might become, beyond any -ism.

Join special guest Mathew J. Lucio, M.Div., pastor of the Peoria Seventh-day Adventist Church and host of the Adventist History podcast, along with Bonnie Dwyer, Carmen Lau, and me as we discuss this book. This Friday, July 16, at 10am Pacific Time on Zoom and Facebook Live.