White Too Long: The Legacy of White Supremacy in American Christianity — Book Review 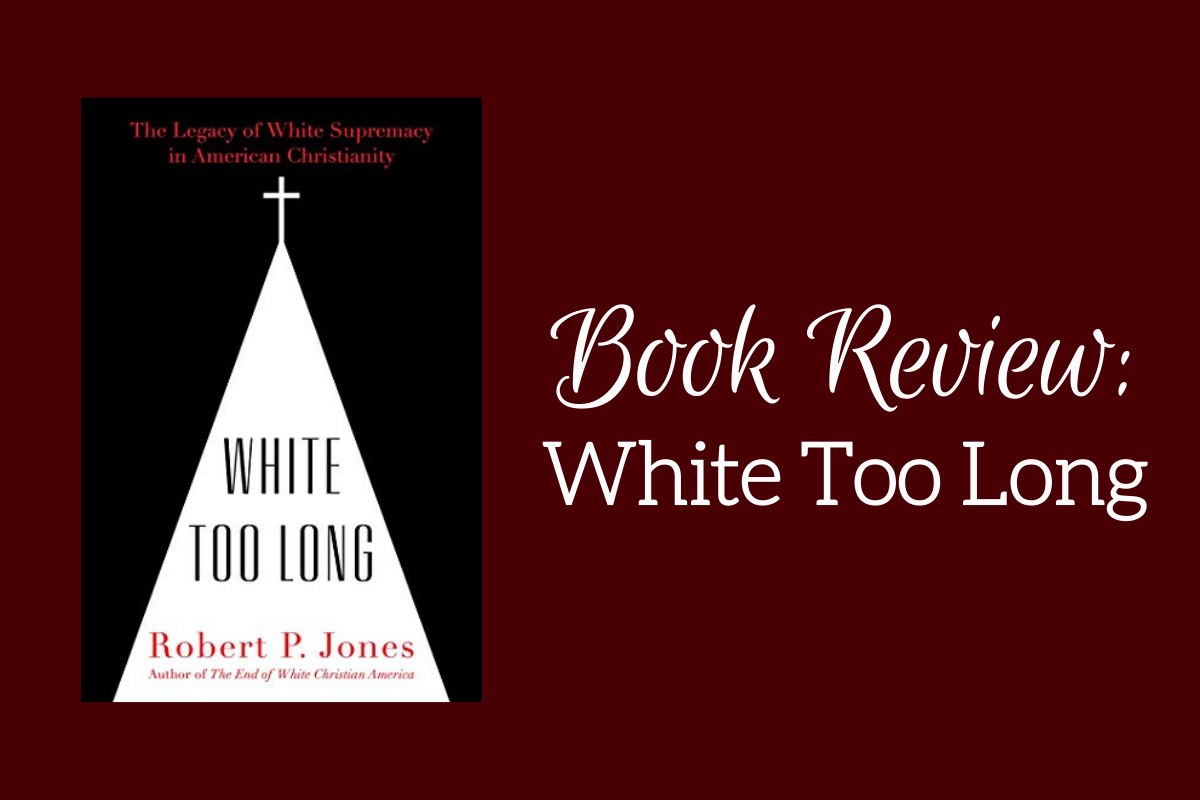 The summer of 2020 began with extensive and intensive protests following the horrific May 25th death of George Floyd at the hands of the Minneapolis police. Demonstrations have continued far longer than one might have expected, including the controversial, summer-long protest in Portland. Recognition of deep systemic inequality has awakened the American conscience. Perhaps with even more potential for lasting effect than in the 1960s Civil Rights era.

This racial tension has, as backdrop, a deep polarization in the U.S. electorate. And within right-wing America — the group most antagonistic to the protesting — one finds a large percentage of white, conservative, evangelical Christians. To an outside observer this would, at least superficially, seem hard to reconcile. The idea of Black citizens seeking equality under the law is surely consistent with the New Testament gospel. So why are many professing white Christians, and high-profile leaders like Franklin Graham and Paula White, supporting politicians and political positions that align with racism?

A partial answer comes via a new book by Robert P. Jones, entitled: White Too Long: The Legacy of White Supremacy in American Christianity. Jones is CEO and founder of the Public Religion Research Institute (PRRI) and a contributor to various publications and media (e.g. The Atlantic, New York Times, and NPR). He also grew up in the South as a white evangelical Christian, schooled in the tradition he now writes about.

The book title is extracted from a phrase found in a 1968 New York Times article by Black author James Baldwin:

“I will flatly say that the bulk of this country’s white population impresses me, and has so impressed me for a very long time, as being beyond any conceivable hope of moral rehabilitation. They have been white, if I may so put it, too long.”

What Baldwin alludes to here is the unconsciousness of white privilege. With the accompanying expectation that the world — as white Americans perceive it — is as it should be. Absent from that naïve and self-satisfied perspective is both recognition of, and empathy for, those who are not so advantaged. What Jones pursues in this book is a case — one both damning and irrefutable — that this white privilege is intimately intertwined with the Christian Church. A twisted “faith” that is deeply complicit in the maintenance of white advantage in America and the corresponding oppression of those falling outside that sphere.

The book’s 236 pages (not counting appendices, notes, index, etc.) are broken into seven chapters, somewhat cryptically titled: Seeing, Remembering, Believing, Marking, Mapping, Telling, and Reckoning. While each has an important fit, for me there are three that stand out most in persuasively making the argument. Remembering traces the history of involvement between white supremacy and the church, Believing reviews how the Bible has been distorted to produce a theology of racism, and Mapping turns to statistically-sound surveying and results analysis to show how racism remains deeply embedded into significant parts of today’s white Christian subculture. The final chapter, Reckoning, is the summation and a “what do we do now?” concluding challenge.

Remembering: The role that white Christianity has played in perpetuating American racism is almost wholly absent from the history books our children are educated from. These sanitized and bowdlerized accounts perpetuate a myth we Americans want to believe about ourselves: that we are inclusive, hold high principles, have the best government, etc. In short, we’re a terrific country — the envy of the world. But past oppression of non-white citizens undercuts that narrative and is consequently unwelcome reading. And worse is the untold story of how parts of American Christianity, both Protestant and Catholic, enthusiastically participated in this maltreatment.

To show the depths of its ugliness, I’ll here provide an extensive quote from this chapter (redacted from pp. 29-32), of a ghastly incident in 1899 Georgia: the murder of Samuel Wilkes. He was accused of killing a white planter, which was true, but the reasons provided by the white version differed starkly from Wilkes’ story. Unsurprisingly, in the white narrative Wilkes did shocking things: axe murder of the planter, smashing an infant on the floor, raping his wife in a puddle of her husband’s blood. Fodder for a vengeful mob.

“The word that Wilkes had been captured and was to be lynched in the nearby town of Newnan reached Atlanta on a Sunday morning. The scene was surreal. When the city’s white churches emptied from morning services, many worshipers streamed straight from church to the train station, hoping to participate in the much-anticipated lynching. To meet demand, the Atlanta and West Point Railroad put together a special run with six coaches… Meanwhile, church was letting out in Newnan. [Wilkes was then taken out of town to the place where he would be killed.] At the site he was stripped naked, and a chain was wrapped around his body from neck to foot… and attached to a tree. Tree limbs and railroad ties were laid at his feet… Before the fire was lit, Wilkes was tortured for a half hour. His ears were cut off, his fingers removed one by one, and his genitals severed — with each held up for the approval of the cheering crowd. With Wilkes in agony but alive, he was doused with kerosene, and the pyre was lit.… While the intensity of the violence and suffering caused some in the crowd to look away, it also inspired expressions of religious ecstasy reminiscent of revival meetings. “Glory!” an old man in the crowd was recorded as saying. “Glory be to God!” …This event became pivotal in W.E.B. DuBois’s understanding of how embedded white supremacy was in the psyches of many white Christians, who saw no conflict with attending a lynching on the way home from church.”

That was a long time ago. So it’s sorely tempting for white Christians today to say, in effect: “Not us, and not now.” Obviously such extreme incidents aren’t happening presently. But the disproportionate violence by police toward Black people, the continuing economic disparity, and racism found in the views of so many contemporary white Americans, just scratch the surface of our problem. It should be evident that we are far from the fine nation we imagine ourselves to be in. But we’re invested in the myth.

Believing: This chapter deals with attempts by part of white Christendom to undergird racism with theology. In the Antebellum South, for example, Reverend Basil Manly Sr. used biblical argumentation to assert the legitimacy of a patriarchal family. This was supposedly the divine order and it included slaves as the “beneficiaries” of a benevolent owner, as these people were inferior and needed someone to properly care for them. After the Civil War, theological justification shifted toward the so-called Religion of the Lost Cause. This view was developed to provide a theological answer for why the South lost, then give moral justification to their former status as slaveholders and thus support white supremacy. Later, as the Jim Crow era slid away, the rationale shifted again to downgrade the validity of social justice and center Christian priorities on individual salvation and a personal relationship with Jesus. For example, Jerry Falwell Sr., in 1965, stated:

“I would find it impossible to stop preaching the pure saving gospel of Jesus Christ and begin doing anything else — including the fighting of Communism, or participating in civil rights reform… Preachers are not called to be politicians, but to be soul winners.”

Later of course, Falwell founded the Moral Majority, which opposed abortion and homosexuality, but conveniently ignored the issue of racial justice. The adjective “Moral” was thus used to give adherents a sense that they held the “high moral ground” in a godless society. But equality for Blacks (and non-whites in general) was not on the agenda.

Mapping:  Looking at history and theology (plus additional chapter themes I’m omitting) can seem distant from the present. Surely white Christians, as a category, are far less racist today. Well, yes and no. To examine present culture this chapter turns to data analysis of contemporary Christianity. The data, mostly provided by Jones’ polling and data analytics organization PRRI, is used to develop a Racism Index (167-168). Jones separates white Christianity into four categories: 1) white evangelical Protestant, 2) white Catholic, 3) white mainline Protestant and 4) white religiously unaffiliated. The Racism Index median is also in this 1-4 order, evangelicals being most racist. The statistical technique called Multivariate Regression Analysis is used to determine this, as well as to make sure the results are independent of other potential influences, like political party, gender, age, etc.  This chapter is the heart of the book, as it homes in — using survey data and analysis — to indict white Christian culture for having far more racism than it understands of itself, or likely would ever admit. The details of his full technique and results exceed what a review like this can or should cover. But here are just some of the conclusions:

• “White Christians think of themselves as people who hold warm feelings toward African Americans while simultaneously embracing a host of racist and racially resentful attitudes inconsistent with those warm feelings” (183).

• A key conduit for ongoing cultural transmission of racist attitudes is the white Christian church (186).

Reckoning: There are multiple ways in which white Christians react to material like this. One is to note, accurately of course, that they personally did not participate in the racism of their sub-culture’s past. True, but beside the point of how we ought to reckon with all this. Another response is to assert that old attitudes are lodged in old people, and such ideas presumably will die with them. Yes, old people will die sooner and take their prejudices with them to the grave. But the book demonstrates how much is passed on to younger generations. Still another reaction is stating the belief that the “arc of justice” is inexorably bending toward equality. Thus, actions like the Civil Rights Movement and recent election of a Black president presumably demonstrate this. Yes, we may be less racist than earlier in our history, but believing justice moves inexorably toward the better can provide convenient cover for passivity. Jones writes (235):

“Perhaps the most important first step toward health is to recover from our white-supremacy-induced amnesia.… white Christian Americans… believe too easily that racial reconciliation is the goal and that it may be achieved through a straightforward transaction: white confession in exchange for black forgiveness. But mostly this transactional concept is a strategy for making peace with the status quo — which is a very good deal indeed if you are white. I am not trying to be cynical here, but merely honest about how little even well-meaning whites have believed they have at stake in racial reconciliation efforts. Whites, and especially white Christians, have seen this project as an altruistic one rather than a desperate life-and-death struggle for their own future.”

And why is that? Because white Christians actually have greater moral hazard. The expression of Christianity that has been adopted by too many is deeply distorted. Twisted into an ethical knot that Christ and biblical authors would find unrecognizable. And beliefs translate into life choices. The people who subvert themselves in this way have become blind to their need, “having a form of godliness but denying its power” (2 Tim. 3:5 NIV).

White Too Long: The Legacy of White Supremacy in American Christianity is available on Amazon in hardcover, Kindle, and audiobook.