Unsettling Truths: The Ongoing, Dehumanizing Legacy of the Doctrine of Discovery — Book Review 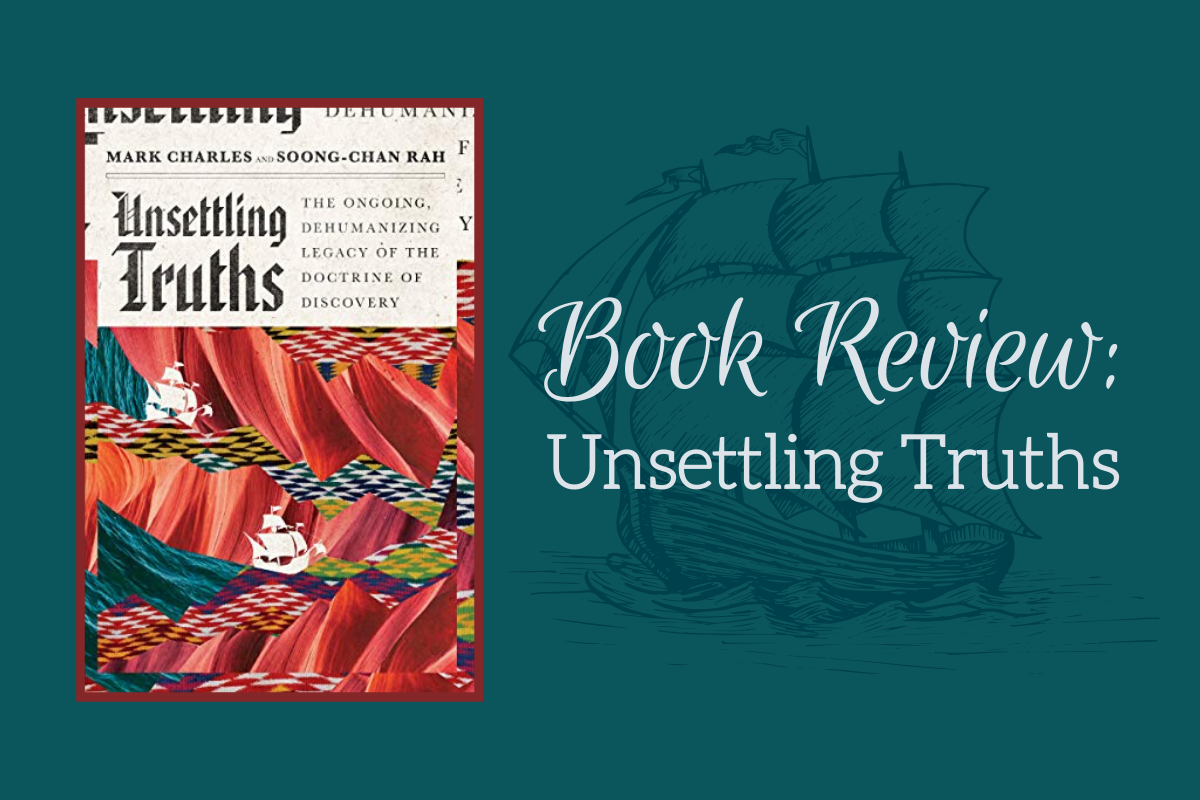 The core purpose of Unsettling Truths: The Ongoing, Dehumanizing Legacy of the Doctrine of Discovery (2019), by Mark Charles and Soong-Chan Rah, is to highlight the atrocious way white Americans and the U.S. government have treated Native Americans, and how the “Doctrine of Discovery” provided (and provides) the ideological justification for this treatment. Charles, of Navajo and Dutch descent, is a speaker, writer, and consultant on American history, race, culture, and faith. Rah is a Professor of Church Growth and Evangelism at North Park Theological Seminary, in Chicago. The authors express “hope that healing can occur when unsettling truths are confronted” (9).

The “Doctrine of Discovery” is the name given to a series of 15th century documents originating with Pope Nicholas V that granted the Portuguese, and later the Spanish, permission to invade and subdue non-Christian lands and to hold them as revenue-producing colonies for European powers. According to the authors, this doctrine provided the necessary “justification” for starting the slave trade, for European imperialism more generally, for a value hierarchy that placed white people above people of color, and for eventually supporting the displacement and genocide of the Native American population of “Turtle Island,” aka North America. One section of the papal bull Inter Caetera, issued in 1493 by Pope Alexander VI and addressed to King Ferdinand and Queen Isabella of Spain, argues that “in our times especially the Catholic faith and the Christian religion be exalted and be everywhere increased and spread, that the health of souls be cared for and that barbarous nations be overthrown and brought to the faith itself” (19). In essence, if a European power “discovered” a land, even if occupied by non-Christians, it could be claimed as new territory for the Europeans — and later the Americans. It is not hard to see how such a mandate could lead to theft, pillage, and genocide on a grand scale, smoothed over by an evangelizing veneer.

The authors show how this kind of Eurocentric thinking serves as the background to white supremacy in the United States, and “can lead the Christian to assume that they speak from a position of privilege, chosen and preferred by God, and that the Christian has the capacity to know what is best for the rest of the world” (28). Thus, religious leaders like Franklin Graham, responding on Facebook to the terrorist attacks in London on June 4, 2017, can suggest “The threat of Islam is real. The threat of Islam is serious. The threat of Islam is dangerous…. We need to pray that God would give our President, our Congress, and our Senate wisdom — and the guts to do what is right for our nation” (29).

Not surprisingly, President Trump gets called out by the authors for his ban on Muslims entering the United States, his approving of the Dakota Access pipeline that runs through lands “considered sacred to the Dakota people” (32), and general polarizing. More unexpected to me was the criticism of President Lincoln, which I will get to by and by, not to mention Cory Booker, Hillary Clinton, and Ruth Bader Ginsburg at various points in the book for inappropriate glossing over of America’s atrocities committed against indigenous peoples. The authors argue that the “dysfunctional narrative of redemptive violence has taken firm root in the social imagination of America. America assumes it has the capacity to use violence in redemptive ways while the rest of the world does not have that capacity” (35). Many Americans do not, in fact, think this way, but in terms of public policy and actions the authors certainly have a point.

The authors lay out the impact of Christianity moving from a persecuted sect in apostolic times to a state religion under Constantine, to how Augustine’s theory of the “just war” assisted in the development of Christian aggression and conquest and the creation of Christendom, the creation of God’s supposed kingdom on earth — in a sharp contradistinction to Jesus’ clear mission which was not about an earthly kingdom or exercising earthly power. Skipping over many details along the way, we arrive at the authors’ arresting question “How did we get from the Holy Spirit enabling the followers of Jesus to speak the languages of the nations in Acts 2 to Christian missionaries washing out native children’s mouths with soap for having the gall to speak in their own tongue?” (66) — referring to just one of the protocols of the Indian boarding school plan, which attempted forced assimilation of Native American youth to white America’s ways.

The authors continue providing evidence that America was created and developed with a white supremacist mentality, a country to protect the rights of white men, with all others at various lower rungs of the social and political ladder. They point out that although the Declaration of Independence begins paragraph two with the ringing phrase that “all men are created equal,” that “equality” doesn’t include the “merciless Indian savages” who are mentioned a few paragraphs later (83-84). In fact, they say, “The Declaration of Independence gives foundation for a framework of white supremacy as it is rooted in the assumption of the exceptional rational capacity of the ethnically pure, white European — now American” (84); furthermore, the Constitution makes it clear that neither women nor Indians have full rights, and that black slaves “are counted as three-fifths human” (91). Going on to talk about Indian removal, segregation, lynching, Japanese internment, and mass incarceration of people of color, the authors conclude that in the documents and worldview of the original framers — and implicitly in many of the powerful who followed them — “there is not a comprehensive value for life or a true belief in equality. Instead, there is the persistent practice of marginalization and dehumanization” (94).

For a Native American looking back on his heritage — or for a person of color looking at the death of George Floyd — even the lyrics of “America the Beautiful” can be offensive in its glorification of an American ideal that has rarely been achieved. The authors comment that the song, presents “the blatant conflation of American greatness with Christian faith” (102), and as I look more closely at the lyrics in light of this book my attention is drawn to the “beautiful” pilgrims’ feet who “a thoroughfare of freedom beat across the wilderness.” Uh, what happened to the freedom of countless Native Americans whose homes were in the way of these beautiful pilgrim feet? After gold was discovered in California, officials in Shasta city “offered a bounty of five dollars for each California Indian head turned in. Several unsuccessful miners suddenly found a more lucrative living in murdering Indians, bringing in horses laden with as many as a dozen Native people’s severed heads” (113). For those interested, papers of a scholarly symposium on the genocide of the California Indians can be found here.

More people are aware of Cherokee removal, Wounded Knee, the Trail of Tears, and other depredations of white America against the Indians. The authors note that the “US Army website lists 425 Congressional Medals of Honor given to US soldiers between 1839-1898 for fighting in the Indian Wars” (115).

One of the real tragedies of American history is the clash of two vastly different concepts of what it means to own and occupy land. First of all, we need to remember that there were many different tribes of Indians; they were not a homogenous group that can be lumped together and understood under one convenient label. Furthermore, white people have this whole idea of property as a defined commodity, individual ownership with surveyed borders and a title and a specific dollar figure attached to it. I am not well-educated on how different Native Americans understood land ownership, but it was clearly different. White Americans also had different ideas about how to maximize productivity out of the land, and they considered the Native American as less than human and standing between them and profitable occupancy, a nuisance, an inconvenience. So, they just wiped them out, or penned them up on reservations.

Let’s move on to Abraham Lincoln, who gets the lion’s share of two chapters, “Abraham Lincoln and the Narrative of White Messiahship” and “Abraham Lincoln and Native Genocide.” The authors’ basic point is that “the victors write the history” (135), and that even though Lincoln gets a lot of goodwill from the average American for freeing blacks, he is on record in 1858 making statements about the inferiority of the black race, that he would allow the continuance of slavery to preserve the union, and in his first inaugural address he affirms the rights of Southern states to maintain slavery (143). Furthermore, a loophole about “involuntary servitude as a punishment for a crime” in the thirteenth amendment, passed under Lincoln, was exploited to perpetuate white superiority in the South, and eventually set the stage for the disproportionately black mass incarceration that we have in the United States today.

The second “Lincoln” chapter lays the blame for much of the genocide of the plains Indians at Lincoln’s feet: the execution of 39 Dakota men (151), the removal of the Dakota and Winnebago tribes from Minnesota (151), the genocide against the Diné and the Navajo in the Southwest, the massacre at Sand Creek, the slaughtering of Cheyenne and Arapaho (156). In summary, “President Abraham Lincoln is responsible for some of the most significant negative impact on the Native American population in US history” (158). The authors note that during the decade of 1860 to 1870, the Indian population in the US was reduced from 44,000 to 25,713, a decrease of 41 percent. In comparison, the authors state that the Jewish population in Nazi Germany was reduced by only 35 percent (162). As a crowning irony, Lincoln’s face is chiseled on Mount Rushmore, a sacred mountain to the Dakota people (160). As a white person and a reader of Team of Rivals and other books favorable to Lincoln, I think it’s valuable to see how Lincoln’s legacy can look from a Native American perspective.

Although the book provided a lot of valuable content in terms of historical information and a Native American perspective, it could have been better edited. For just one example, a paragraph ends “However, the paradigm of fragility limits the responses that can be taken towards white people to either dismissiveness or walking on eggshells around them” (173). The very next paragraph ends with “The language of fragility can limit engagement on the topic of race as it requires dismissing the feelings of white people or walking on eggshells around white people” (174). Some tightening up and elimination of repetition could have helped the authors’ presentation.

Unsettling Truths lives up to its title. It is not a fun or hopeful book, but it is a valuable educational resource. The authors’ point, that “you cannot discover lands already inhabited” is true — so long as we recognize the equal humanity of those already on the premises.