There Will Be No Saying 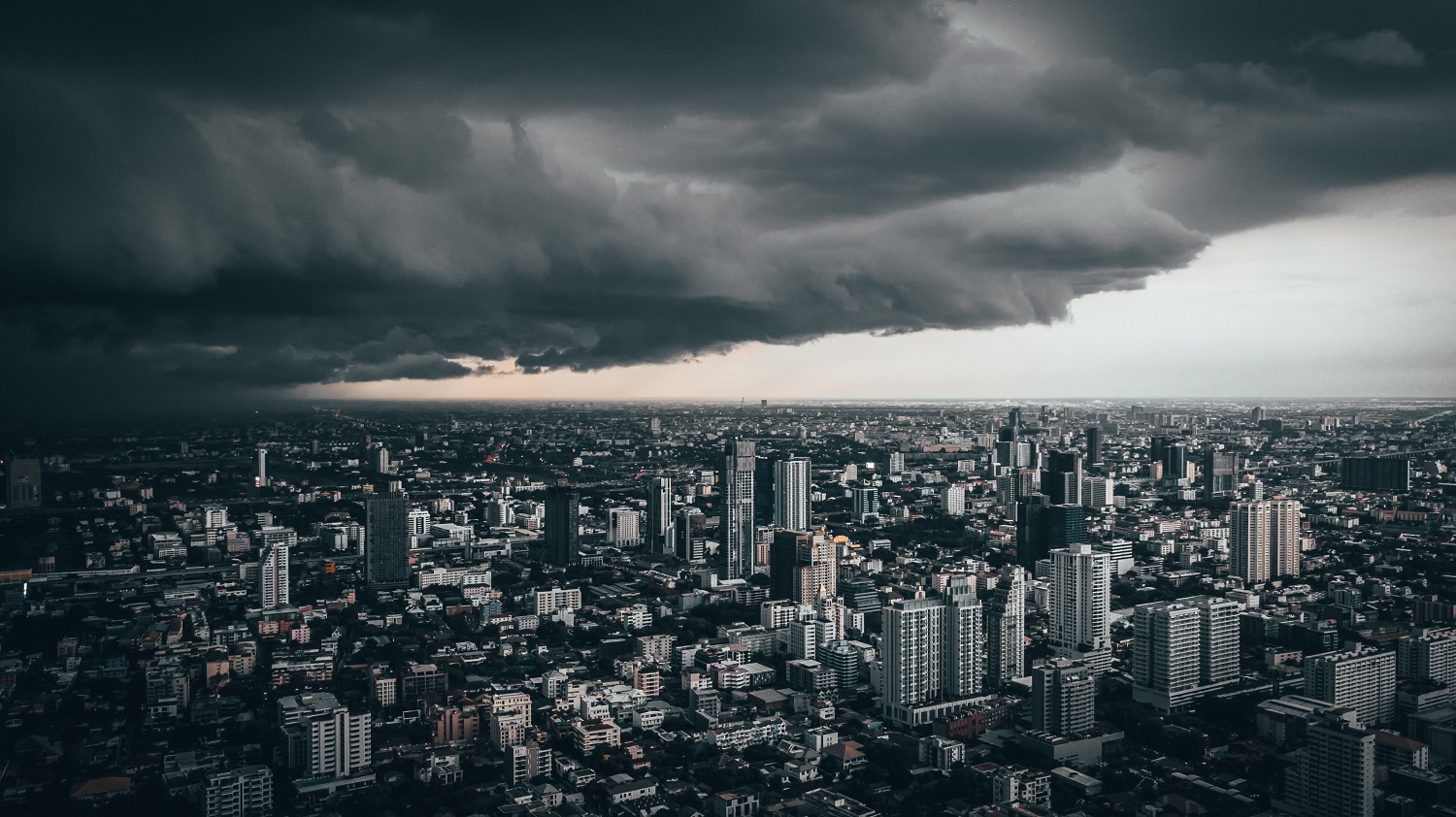 On a bright September day, with the air so clean the shadows cast by buildings and people across lawns and streets looked to be laser-cut, the world shuddered to a halt. Among the images I retain from that September 11 is one both mundane and jarringly incongruous. In the near background one of the towers is enveloped in smoke, while in the foreground is a patch of green so vibrant and vivid as to seem dropped there from an Edenic past. On it are several figures, frozen in place, their shadows hard behind them as they face into the horror unfolding a few blocks away.

The air would grow gray and thick and poisonous as the day ground on, and the towers came down, and the streets and bridges filled with the silent, plodding, staring thousands. But in that luminous instant we witnessed the dissolving of a shared reality.

We don’t control what becomes iconic for us from past events. There were hundreds of photos and videos from 9/11 that scrolled past me in those days and weeks, many of them much more graphic and arresting. Why did I fix on that one? I’ve come to think it was a visual puzzle which did not correlate with anything in my visual repertoire. I kept trying to adjust it, square it within a circle, align the bubble on the horizontal precisely between the hash marks.

In trying to trace this impulse back to some source, I’ve realized it comes down to light and dark, a dual of opposites that does not allow for gradations. In my early impressions, something was set in place that acted to filter and then form some of my visual expectations.

When I was four or five, I was allowed to sit quietly at the back of my grandfather’s classes in European history, especially when he showed newsreels of the First and Second World Wars. The jerky, black and white images of soldiers erupting out of trenches to charge across muddy fields strewn with barbed wire in the face of artillery bombardment, burned their way into my psyche.

These battles were always fought in the summer under leaden skies and threatening clouds. There was never sunshine, only the fog of war, both literal and metaphorical. For a child soaking up unfiltered images, grey skies and clouds came to mean violence and tragedy; sunshine meant glory. With that template in place, 9/11 on a day of abundant sunshine ripped up my primal perspective.

The correspondence theory of truth — that what is true is what generally aligns with the reality I observe — works most of the time, with the added bonus that people around me think I am within the circle of sanity that they enjoy. So, my childish notion that bad things should not happen on beautiful days is tempered by the responsibility to adjust to the universe, without the expectation that it conform to my wishes. But if the “real” is that which I experience, then my dreams and memories are real, and the products of my imagination have their reality too.

Spring quietly establishes itself in the Washington, D.C. suburb where I live. The tulips in our garden thrust through the soil, flex, rise, and blossom. We delight in them, chronicling their growth, photographing their opening to the sun, their closing for the night. The light in the park at the center of our court wavers and dissolves. It still has traces of the bleakness of winter. It is difficult to remember, right now, what 100 degrees with 90 percent humidity feels like in the nadir of a July in D.C. Our court is quiet, almost every parking space filled, the occasional dog pulling its person passes by. We are under orders to stay at home.

We are weeks into the coronavirus pandemic. The cresting wave of infections and deaths, traveling from east to west around the globe, has still to break in force over us here in Maryland. The fact that I have not yet personally experienced it does not change its reality. It is already here.

I read daily reports of the heroic efforts of those fighting this disease. It is on my mind, a feeling of electricity in the air, a thrumming presence of dark clouds scudding across the horizon of memory. I imagine the silence in the streets of the European cities that I passed through years ago. I put myself there, feeling the waves of grief that rush through an Italian village and lap against the villas set amongst the vineyards on the hillsides. All of this is real.

We are just days away from Easter, still on a pilgrimage through Lent. Depending on how you regard Easter, Lent is either a gradual descent from the Mount of Transfiguration on a long glide path to a crash landing or a spirited hike that abruptly ends at the lip of an abyss. On the other side, shrouded in early morning mist, is a figure difficult to see but impossible to ignore. And all that lies between ourselves and this being whose presence provokes in us the flame of longing, are these cliffs of fall. The Resurrection continues to be our light of hope and our surest lure to faith, our fervent reason to daily cross the abyss.

In the weeks before Passover and his crucifixion, Jesus spars with those who measure his vision over against what they know to be true. This kingdom you talk about, they ask, how will we know it has arrived? They assume, quite understandably, that it will be an event established in space and time. There will be subversions, a period of necessary and extended violence, followed by a proclamation that will fix a before-and-after point in time. But first there will be signs and portents; we who are trained will pick up the clues. We will see the kingdom coming. We are ready for it.

And Jesus says, you will not, and you aren’t: it is already here. The kingdom of God belongs to children, he says, and “whoever does not accept the kingdom of God like a child will never enter it.”1

The usual ways that we verify something of importance, through testing, through fact-checking, through observation, through cross-referencing — none of those work to test for the presence of the kingdom of God. It does not take up space, it does not occupy dimensions; it cannot be plotted nor surveyed. It is invisible in its being; its effects are seen through the lives it is in the process of transforming. It is a micro-evolution of the soul, magnified and accelerated, transmitting to the farthest reaches of the multi-verse within each of us.

Were there visible signs? What Jesus said to the disciples of John applied: the blind see, the lame walk, the lepers are clean, the dead are raised to life, the deaf hear — and blessed is the one who does not stumble over me.

But face it — we all stumble. An invisible kingdom? It’s so difficult to grasp in an era that is pervasively results-oriented and expects an astringent and quantifiable accountability. Do we have enough faith? How do you measure that?

Jesus threw out a hyperbolic example, wildly exaggerated, to make the point that our trust and God’s love can shift the world. “If you have faith no bigger even than a mustard seed, you will say to this mountain, ‘Move from here to there!’, and it will move; nothing will prove impossible for you.”2 Taken literally, it’s nonsense; taken seriously and metaphorically, it puts our hands in God’s. “Our lives depend,” said George Steiner, “on our capacity to speak hope, to entrust to if-clauses and futures our active dreams of change, of progress, of deliverance.”3

In the physical absence of Jesus, whose primary care changed the lives of so many within his touch, the healing of our souls comes through the Word as we enter rehab for a new life, one that springs up in defiance of death and takes on new form on the other side of it.

For us right now, the kingdom is perhaps less conceivable as a top-down hierarchy than a shifting, outwardly-expanding web of the forthright and trusting. With the generosity that offended the righteous, Jesus stamped the tickets of the forgotten and displaced. Bruce Springsteen describes it well.

This train carries losers and winners

This train carries whores and gamblers

I said, this train carries broken-hearted

This train, all aboard….4

Overcoming our embedded fears and our illusions of control, God’s healing and salvation can awaken the smallest mustard seed of goodness in any of us. Every time a doctor risks her life to examine a COVID-19 patient, God’s kingdom shimmers into view. Every time a public servant honestly serves the people, God’s kingdom is manifest. Every time someone raises a song, writes a poem, prays for another person, or helps the fearful and the tired, God’s kingdom sends down roots. Every time we forgive one another and ask for forgiveness, every time we carry on in spite of our doubts, every time we realize, with a catch in our throat, how wide and deep and wholly surrounding is God’s love — the kingdom is made real.

The kingdom is already here.

Photo by Joshua Rawson-Harris on Unsplash