Stewards of Eden: What Scripture Says About the Environment and Why It Matters — Book Review 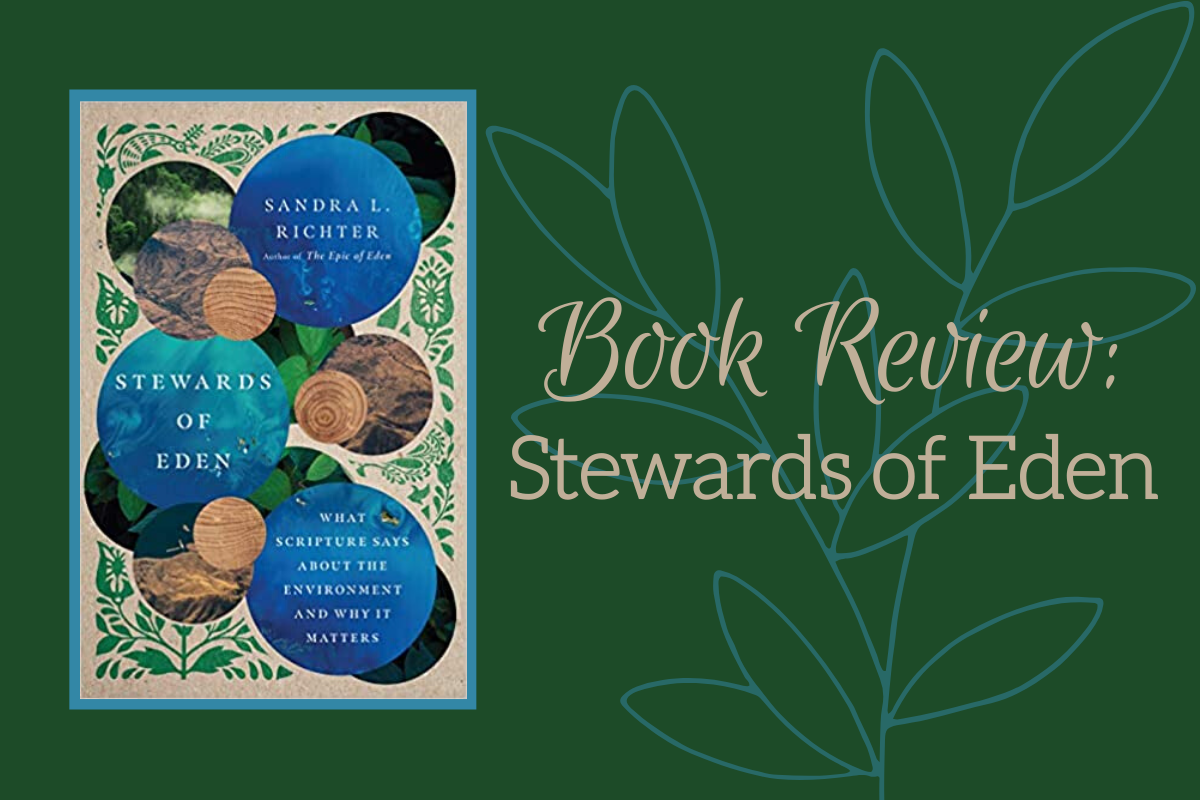 I tend to think of environmental concerns as a modern issue, something associated with the invention of the steam engine (1780) and the industrial revolution, the extinction of the passenger pigeon (1914), dropping of atomic bombs (1945), Chernobyl (1986) and loss of the polar ice caps (look outside your window). Thus, I was curious to see what ideas and instruction Sandra L. Richter, Chair of Biblical Studies at Westmont College and a member of the Committee for Biblical Translation for the NIV, would be able to draw out of the Bible in her new book, Stewards of Eden: What Scripture Says About the Environment and Why It Matters. I expected to see “the earth is the Lord’s, and everything in it” (Psalm 24:1a). Not there — but in a couple hundred other texts and a clear philosophical position, plus a vivid awareness of today’s alarming environmental challenges, Richter provides a short, accessible, and compelling book about our God-given role as stewards of the environment.

According to Richter, “the church is largely paralyzed on this topic,” the church is “MIA on the issue of environmental stewardship” (1). But how important is environmental care to the Christian? Richter says we should ask “Do I see this particular value or precept systematically represented in [the Bible] as an expression of the reign and rule of God?” (7). To the question of whether environmental stewardship is a biblically mandated core value of the Christian, Richter says the answer is “Yes! Yes! Yes!”

The book has seven chapters: “Creation as God’s Blueprint”; “The People of the Old Covenant and Their Landlord”; “The Domestic Creatures Entrusted to ʾādām [humanity]”; “The Wild Creatures Entrusted to ʾādām”; “Environmental Terrorism”; “The Widow and the Orphan”; and “The People of the New Covenant and our Landlord.” In order to preserve her perfect number of seven chapters, Richter adds an unnumbered chapter: “Conclusion: How Should We Then Live?” and an appendix with “Resources for the Responsive Christian.” All this in only 118 pages of text. There are also 34 pages of notes for those who want to dive deeper into Richter’s sources, and a two-page index of cited biblical texts.

There are some familiar environmental ogres, including factory farming, mountaintop removal coal production, and general capitalistic short-term thinking. But Richter adds value by considering these processes within a framework of ancient world insight. For instance, she talks about the environmental terrorism practiced by the Neo-Assyrian empire in cutting down fruit trees during the siege of Ursal (62-63). Such tactics destroyed the productivity of the region for decades to come — given the time needed to grow new olive and fruit trees. Against such environmental terrorism, Richter cites Deuteronomy 20:19, which commands those using siege strategy, “you shall not destroy [the city’s] trees by swinging an axe against them. Indeed, you may eat from them, but you shall not cut them down.”

Richter compares ancient environmental terrorism to the United States spraying 20 million gallons of chemical herbicides (so-called Agent Orange) over South Vietnam during the Vietnam War, a tactic which led to devastating environmental and human damage, Vietnamese and American, and which continues to cause harm to this day. And I like that Richter presents these examples with sufficient detail to shake up the reader’s complacency.

Although she pummels factory farming, as noted above, Richter does not promote vegetarianism. Those interested in contemporary advocacy of vegetarianism should take a look at Jonathan Safran Foer’s New York Times piece, “The End of Meat Is Here” (May 21, 2020), and a few of the 3,000 plus comments the piece elicited.

I was quite interested to see how much time Richter spends promoting the idea of the Sabbath, for multiple reasons including reminding human beings that their ultimate purpose is not to work, not to maximize profits, but to worship God. The Sabbath, she says, reminds us to live with restraint — and give domestic animals a well-deserved rest. Here is a sample of her writing on the Sabbath:

“The final stanza of the creation song introduces the ultimate climax of both the week and the message — the Sabbath day (Gen 2:1-3). This seventh day is set apart; it is sacred; it is holy. This day communicates that the universe in all of its breathtaking symmetry is finished, that the Creator is pleased, and as an expression of his good pleasure God has seated himself on his throne to revel in the beauty before him. Most important to us, the seventh day communicates that the perfect balance of this splendid and synergetic system is dependent on the sovereignty of the Creator” (10).

Richter also talks about the Sabbath rest for the land — letting it lie fallow every seventh year in order to promote sustainability (21-22); how the Sabbath allows servants and domestic animals to have a rest day (22-23); how observance of the Sabbath promotes “the posture of restrained production and moderate consumption that facilitated the long-term perspective commanded by God” (23).

Richter’s strong advocacy for the Sabbath leads me to wonder where are Adventists on addressing environmental concerns? I am not an expert on this question, and invite readers who know of additional valuable resources as well as actions of environmental care undertaken by Adventist organizations to list them in the comments. Our Fundamental Belief 6, on creation, notes that humans were “given dominion over the world, and charged with responsibility to care for it.” Belief 21, on stewardship, is equally brief and indirect on environmental concern. Last year, Spectrum published three statements made by the church in the 1990s, all under the presidency of Robert S. Folkenberg. Cindy Tutsch published a brief piece on “Ellen White and the Environment” in 2019 and Richard de Lisser published a short article, “Adventists and Ecology” (April 19, 2019, Adventist World).

Perhaps the most substantive examination of Adventists and the environment can be found in the book Entrusted: Christians and Environmental Care (Adventus, 2013), a collection of essays edited by S. Dunbar, L. J. Gibson, and H. M. Rasi. One of the essays included is “What do Adventists have to Say to the World about Environmental Stewardship?” by Floyd E. Hayes and William K. Hayes. I don’t think I’m going out on a limb to say that the church could and should be more active in being good stewards of the environment. And so should I.

What are some sample things we can do, as individuals or organizations, to promote a better environment? Here are some sample suggestions from Richter’s list of 17 ideas on “How to Take Action” (114-118):

4. Live with restraint, live with less.

7. Make sure your church, school, and office are recycling responsibly.

8. Assess and modify your car usage, and perhaps the kind of car you drive.

12. Refrain from using pesticides and chemicals on your lawn.

14. Reconsider water usage on your land.

Caring for the environment is indeed a core biblical value; it is a way we can join ranks with other groups of Christians and non-Christians in a positive community endeavor; it is a high value among many young adults. Richter’s book is an excellent educator and motivator. The cover is beautiful, textured, and sure enough, when I checked inside I saw that the book was printed using “sustainably sourced paper.”