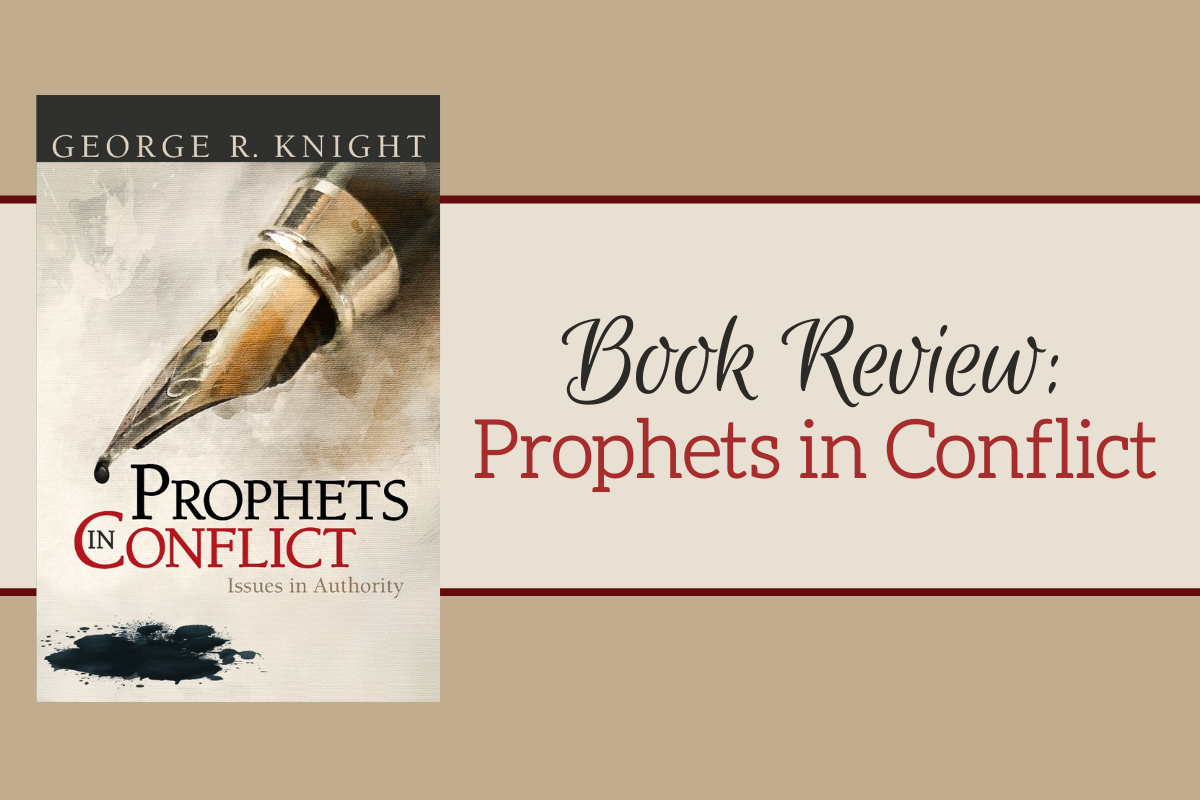 George R. Knight (1941) is one of the most prolific Adventist authors of recent decades. Since he published his first book in 1982 (Issues and Alternatives in Educational Philosophy), Knight has written over 40 books and edited or contributed essays to some 60 other books. It would seem that this enormous productivity across different disciplines led the editors of the Festschrift in honor of George Knight (2015) to refer to him on the cover as an “Adventist Maverick.”

As a historian of Adventism, Knight has produced several outstanding studies of significant persons, of important events and trends in Adventism, in particular about the Millerite Movement. He wrote the, probably definitive, biography of pioneer Joseph Bates. In addition, his books about the 1888 conference, its key-players and its aftermath, deserve special mention. Since 2002, Knight has increasingly written on theological issues and also authored commentaries on a number of Bible books.

During most of his career the person and ministry of Ellen White has fascinated Knight and inspired him to produce a series of books about her, with Prophets in Conflict being the most recent one. Whether it will be his “final major contribution to Ellen White studies” about her, as he claims in his Foreword (8), remains to be seen!

One of the major contributions of George Knight to the Seventh-day Adventist denomination has been his role in providing Adventists around the world with a balanced portrait of Ellen White. His books have done much to dispel persistent myths about the church’s prophet, to place her in the context of her time and to picture her as a “normal” human being. He has made a consistent effort to correct inadequate views of her inspiration, and has helped large numbers of people around the world to read Ellen White’s writings as they were intended. This has been a remarkable achievement, the more so since his publications often were in tension with the opinions of prominent thought leaders in the denomination, who frequently tended to promote a different kind of prophet. Somehow, Knight mastered the art of daring to be controversial, and of voicing his (well-founded) opinions, without losing the possibility to teach and publish within the confines of official institutional Adventism (except when, for a short period in 2017, his books were banned in the Michigan Conference).

It should come as no surprise when a prolific author such as George Knight repeats himself from time to time as new books come off the press. Some of his books are, in fact, a rewrite of earlier publications, e.g. his Sin and Salvation: God’s Work for and in Us (2008), which is based on his earlier Pharisee’s Guide to Perfect Holiness (1992), and The Cross of Christ: God’s Work for Us (2008) which appeared earlier as My Gripe with God (1990). To a large extent this present book fits this pattern of recycling earlier material. Of the 14 chapters in all, except one, have been published earlier. But the majority of church members will not have most of the original sources at their disposal, and this collection of essays therefore provides a welcome overview of many of the issues around the person and the work of Ellen White.

The title “Prophets in Conflict” has special reference to Part 1 (chapters 1 and 2) which contrast Joseph Smith, the prophet of Mormonism, with Ellen White, the prophet of Adventism. The subtitle “Issues in Authority” zooms in on the crucial difference between the two. In the Church of Jesus Christ of Latter-Day Saints (Mormons) the authority of their modern prophets (Smith and his successors) and their non-biblical prophetic writings supersede the authority of the Bible. For Adventists, the official view is that the modern prophet and her writings are always subject to the Bible. However, the Adventist Church always faces — and sometimes succumbs to — the “Mormon temptation,” i.e. using the non-biblical writings as the ultimate authority for the interpretation of the Bible. “Flirting” with the “Mormon temptation” continues to be an ever-present danger, especially at the fringes of the church. “The perfectionistic, fundamentalistic subdenominations within the church still largely rely on Ellen White for their distinctive theology and generally have no problem viewing her as an infallible commentary on the Bible” (43).

Unfortunately, the church at large is also vulnerable at this point. The General Conference leadership recently developed a new statement about the continued trust in the Spirit of Prophecy, with the intention of having it endorsed by the 2020 Annual Council, and then to submit it to the 2021 General Conference for approval by the delegates from around the world. The statement that the AC delegates were originally asked to endorse contained the following statement:

“We believe that the writings of Ellen G White were inspired by the Holy Spirit and are Christ-centered and Bible-based. Rather than replacing the Bible, they uplift the normative character of Scripture and correct inaccurate interpretations imposed upon it…”

After receiving concerns from several Executive Committee members, this wording was replaced by words that were deemed more acceptable. It now states that the Ellen G. White writings “safeguard the church ‘from every wind of doctrine’” and offer “an inspired guide to Bible passages without exhausting their meaning or preventing further study.” It would appear to me that the drafters of this revised statement are still sailing close to the wind of “the Mormon temptation.”

Part 2 (chapters 3–8) is devoted to a “Framework for Understanding Ellen White’s Prophetic Authority.” Although much of the material in this segment is quite readily accessible in recent books by the author, many readers may profit from this systematic presentation of key factors for a good understanding of what to expect and what not to expect from her writings. Chapters 5 and 7 are particularly useful.

Chapter 5 deals with “the myth of the inflexible prophet” and explains how the prophet was much more flexible in her standpoints, and far more responsive to changing circumstances, than many of her inflexible followers were in her own time, and also are in our present time.

Chapter 7 follows up on this theme of flexibility and underlines that Ellen White did in certain instances adjust her opinion by providing further clarification, as some of her views developed over the years (e.g. regarding the Trinity, the eternity of Christ, and the personhood of the Holy Spirit). However, such change could also go beyond a mere development of certain beliefs and could be a reversal of earlier held views, as for instance with regard to the “shut door” theory and the consumption of pork (105-107).

Chapter 8 is a short but important note regarding the controversial question of whether Ellen White was in her writings “inerrant” with regard to historical details. Knight shows clearly that the claims of many of her followers have gone much further than the claims she made herself for her writings.

Part 3 (chapters 9 and 10) touch upon the authority of the many compilations of Ellen G. White material. Many readers of the writings of Ellen White do not realize that, in actual fact, she did not sit down to write any book from scratch, but that all her books (even her popular Steps to Christ) were compilations of material she had written earlier (123), often in the form of articles or letters. Some of the topical compilations date from when she was still alive, and were composed under her supervision. But, as she intended, the work of making compilations continued after her death. Knight argues that in some cases these compilations can be misleading, because of the way in which the content is selected, labeled under suggestive headings, and ordered. His criticism targets especially three books that were compiled by General Conference departmental personnel: Counsels on Diet and Food, Messages to Young People, and Country Living. This latter book, Knight believes, has, due to its definite anti-urban bias, been detrimental to a healthy approach to mission to the cities. Moreover, its few pages with quotes about labor unions are extremely one-sided and, thereby, misleading. Knight further argues that the collection of statements about the human nature of Christ that was assembled by the authors of Seventh-day Adventists Answer Questions on Doctrine gave proof of a serious “selective bias” (131).

Part 4 (chapters 11 and 12) zero in on proper and improper uses of Ellen White’s authority. Some have become very skilled in making Ellen White say things she never did say. The improper use of Ellen White’s authority by those who defend the post-Fall sinful human nature of Christ is particularly relevant, as the unbiblical, but widely accepted Last Generation Theology, with its legalistic and perfectionist leanings, can only be supported by a very selective use of statements from the pen of Ellen White, while ignoring many other statements that do not support the LGT arguments (149-161).

Part 5 (chapters 13 and 14) offers some closing thoughts and guidance on how to apply Ellen White’s counsels, in our personal life and in our relationships with others. Interestingly, Knight quotes M. L. Andreasen (whom he otherwise sharply criticizes for his role in resurrecting and promoting Last Generation Theology) to underline an important principle: “I believe, friends, that we ought to give heed to the messages God has given [through Ellen White], apply them to ourselves and not to judge others. Oh, the intolerance of some who think they are right! Let them be right. But do not judge others” (195).

This (final?) book by George Knight about the person and work of Ellen White is a very useful capstone of his important contributions toward improving the understanding of church members around the globe of the role of the modern prophet. Perhaps one could argue that the subtitle covers the over-all theme of the book better than the title (“Prophets in Conflict”). The title seems to apply only to the first two chapters, whereas the substance of the subtitle (“Issues in Authority”) is reflected throughout the book. Nonetheless, I warmly recommend this book to our global membership. It certainly also deserves to be translated into many other languages, since the education of church members in non-English speaking areas with regard to Ellen White’s role in Adventism is even more urgent than in the English-speaking world.

Author Interview with George Knight about “Prophets In Conflict”

Prophets In Conflict: Issues in Authority is available on Amazon in paperback and Kindle, or from the Adventist Book Center.

Reinder Bruinsma is a native of the Netherlands who retired in 2007 after a long career in pastoral, editorial, teaching, and church leadership assignments in Europe, the United States, and West Africa. After receiving a Bachelor’s degree from Newbold College and a Master’s degree from Andrews University, he earned a Bachelor of Divinity with honors and a doctorate in church history from the University of London. He recently interrupted his retirement to serve as the president of the Seventh-day Adventist Church in Belgium and Luxemburg. He has authored more than twenty books, in Dutch and English, and a large number of articles. He has also translated various theological books from Dutch into English.