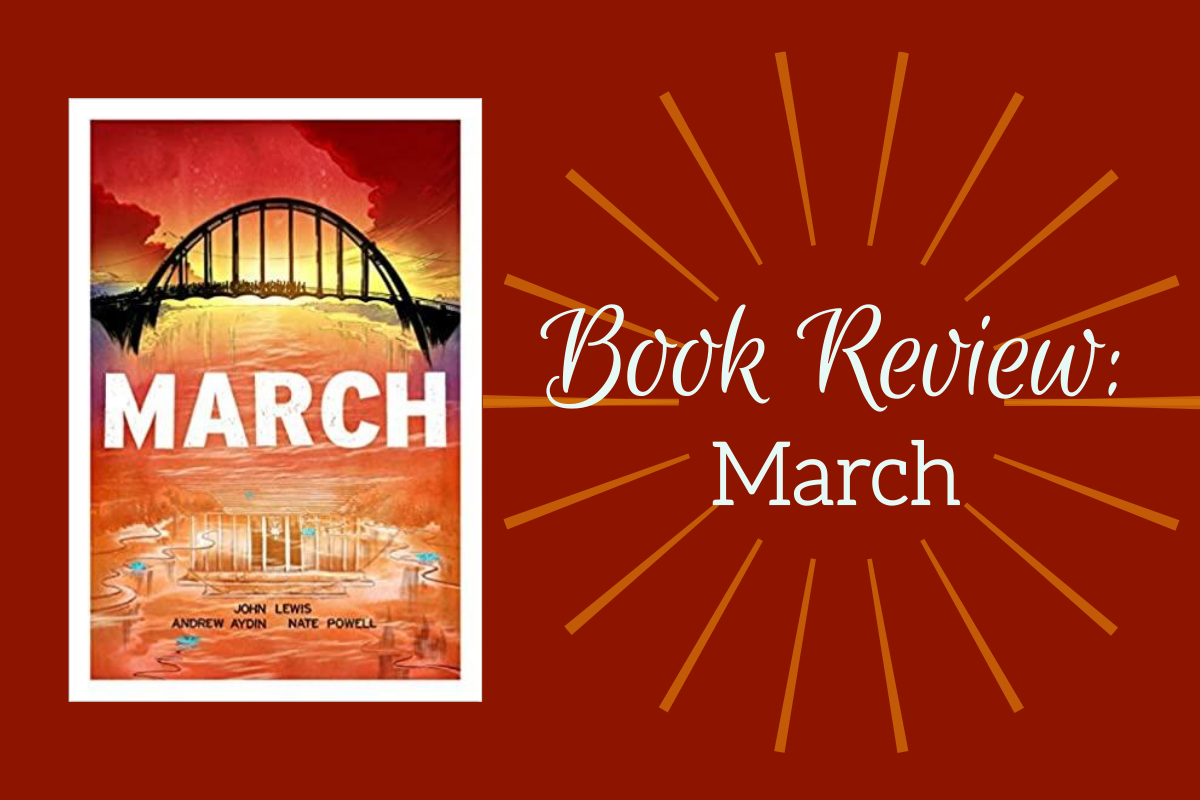 With the recent death and funeral services for Civil Rights icon and Congressional Representative from Georgia, John Lewis, it’s a great time to remember his legacy, and the March trilogy does an epic job of just that. This is a graphic novel in three volumes, with the story written by John Lewis himself and Andrew Aydin, and the artwork by Nate Powell. The series provides an ideal entry point for adolescents to adults who would like to learn more about the Civil Rights era.

The trilogy is focused around Lewis’s involvement at the heart of Civil Rights activism between the Supreme Court decision of Brown v. Board of Education, in May of 1954, which ruled that “separate but equal” public schools were inherently unequal and unconstitutional — and by implication this would apply to other public segregated facilities — to the signing into law of the Voting Rights Act on August 6, 1965. The story is told through an interesting framing device, going through the day of Barack Obama’s first inauguration (January 20, 2009), from Lewis’ perspective. (Barack Obama’s recent eulogy for John Lewis makes a beautiful counterpoint to the interaction of Obama and Lewis at the inauguration.) So, there are little scenes of getting ready for and attending the inauguration, with the bulk of the books being devoted to Lewis retelling the fight for Civil Rights in the 1950s and 1960s.

If America were what it ought to have been, we wouldn’t have needed the Civil Rights era. Bear in mind that Jackie Robinson became the first Black player in Major League Baseball in April of 1947. The U.S. Armed Forces officially ended segregation in the Armed Forces in July of 1948. Or, why not go back to the Thirteenth Amendment, which abolished slavery in 1865 (three years after the Emancipation Proclamation technically freed slaves in Confederate states), or the Fourteenth Amendment, in 1868, which promised equal protection under the law to all citizens. Of course, we should never have had slavery in this country to begin with, but given that we had slavery and abolished it 155 years ago, why have we had such a hard time grasping the simple concept of equal (and good) treatment for everyone? Two points that the trilogy helped me understand better than I ever have before are:

• How ridiculously long Black Americans have been waiting for equal treatment.

• How every Civil Rights gain was the result of much protest, persistence, blood. and sacrifice. Nothing was voluntarily given by the White majority.

Sure, there have always been White allies, and they are certainly important and laudable, but in this story, they are a distinct minority, vastly outnumbered by White hostility or White indifference. I got a good start on this concept when I read Carol Anderson’s White Rage, which recounted the story of White backlash to every advance of Black persons. But the March trilogy brought this home to me at a new level.

Book I starts off with a brief look at Lewis’ childhood, but focuses mostly on the lunch counter fight in Nashville. Although the Brown v. Board of Education Supreme Court decision of 1954 declared that “separate but equal” segregated facilities were inherently unequal and unconstitutional, that by no means led to Whites hospitably opening doors to Blacks. The decision itself provided no timetable for desegregation beyond the subjective “with all deliberate speed,” which White authorities translated as “Never.” In his inaugural speech as Governor of Alabama in 1963, George Wallace famously declared “segregation now, segregation tomorrow, segregation forever.” So, although segregated facilities were ruled unconstitutional in 1954, every concession toward implementation of that ruling had to be made by determined perseverance against hostile and intransigent White racism.

With the lunch counter situation, Blacks in Nashville (and throughout the South) could shop in downtown stores and pay the same prices as Whites, but couldn’t use the lunch counters or the dressing rooms. After some test sit-ins in November of 1959, John Lewis and some others began regular sit-ins in February of 1960. Black students, sometimes accompanied by White allies, would take seats at the lunch counter, ask to be served, and be refused. Their courage inspired other students and the numbers grew. On February 27, White roughnecks attacked Black protestors in a Woolworth’s store, with the police department deliberately letting this go on. After the roughnecks left, the Blacks were told they would be arrested for disturbing the peace if they did not immediately leave their seats. So John Lewis, along with others, was arrested for the first time (of many) and put in jail, simply for wanting to enjoy equal treatment as a Black person in a business establishment that was happy to take his money. The protests grew, received national attention and support, and on May 10 lunch counters in Nashville served Black customers for the first time.

You might think this would be a tipping point and that other White establishments would follow suit, but not at all: movie theaters, restroom facilities, restaurants and cafeterias, schools, equal pay for equal work, each area of equality implementation had its own battle. In one “what were they thinking?” scenario, policemen beat on Black would-be movie theater customers for trying to buy tickets to see Cecile B. Demille’s The Ten Commandments (Book II, 21). John Lewis spent his twenty-first birthday in jail as a result of this theater protest. As a White person, I am confused, ashamed, at the way the smallest concessions to equality had to be forced out of the White community.

Book II is focused around the Freedom Riders, who worked on integrating the interstate bus system. The Supreme Court decision Boynton v. Virginia (1960) outlawed segregation on interstate buses and in terminals for those buses, but the decision did not mean bus lines immediately began integration. Rather, as with desegregation of public education, the decision was the starting point for a concerted protest against the practice, which took place in 1961 and involved more arrests, harassment, and life-threatening beatings. Book II culminates with the March on Washington and MLK’s “I Have a Dream” speech, on August 28, 1963.

Book III starts with the bombing of the Sixteenth Street Baptist Church in Birmingham (Sept. 15, 1963), which killed four Black girls, ages 11 to 14. On Sept. 5, 10 days before the bombing, Governor George Wallace had stated, in an interview with The New York Times, that what Alabama needed to stop integration was “a few first-class funerals.” Public leaders who speak irresponsibly create the social climate which stokes racism.

Book III moves on to the effort to greatly increase Black voter registration in Selma, Alabama, seat of the Dallas County Courthouse. Ever since Blacks were given the right to vote by the Fifteenth Amendment (1870), White authorities have sought to suppress that right. In Selma, and throughout the South, the local Registrar of Voters had wide discretion on questioning and testing citizens registering to vote. White citizens would be given a free pass to register but for Blacks, if they were bold enough to try to register in the first place — overcoming threats of violence, employers promising to fire any Black employees who registered, and so on — the Registrar might ask them to name the number of jelly beans in a jar or give out tricky literacy tests (not given to White voters) and disqualify them for any errors.

Protestors against the refusal to register Black voters were charged with “unlawful assembly” and taken to Selma Prison Farm where they stayed for weeks. Black voters standing in line to register to vote were forced to stay in line without leaving; they couldn’t be brought water, couldn’t use the bathrooms. It was just stonewalling by Whites. There was no pretense of justice. The same could be said for gerrymandered voting districts and other measures meant to inhibit minority voting today. It’s less brutal, but it has the same goal: maximizing the White vote. It is encouraging that Book III ends with the 1965 passage of the Voting Rights Act, but there is considerable evidence that the Supreme Court decision of Shelby v. Holder (2013) significantly weakened the Voting Rights Act and has led to reinstitution of voting practices specifically targeted to discourage minority voting.

This trilogy would be a great book for you, reader, or someone you love. The story is compelling, heroic, uplifting. The drawings make the pages turn rapidly, and bring the violence and ugliness of the story vividly to mind without overwhelming the sensations as might happen in a movie.

This is core American history that we should all know more about. We know something about Martin Luther King Jr., Rosa Parks, and Malcolm X, but there are so many other interesting people to meet, including Fannie Lou Hamer, Diane Nash, Bob Moses, James Meredith, Medgar Evers, Bayard Rustin, A. Philip Randolph, and of course John Lewis himself, a truly inspirational public servant. I was so impressed, as a long-time college teacher, that people in their twenties, most of them students, played leading roles in changing the face of American history for the better.

Each book of the trilogy is dedicated “To the past and future children of the movement.” It is our duty, as Christians, to seek to educate ourselves about social justice and to actively pursue it. The March trilogy can be considered highly recommended reading for the journey.

Scott Moncrieff is a Professor of English at Andrews University. He plans to use the March trilogy as part of a class on Social Justice and the Graphic Novel during Spring Semester, 2021.