I’m Still Here: Black Dignity in a World Made for Whiteness — Book Review

I’m Still Here: Black Dignity in a World Made for Whiteness — Book Review 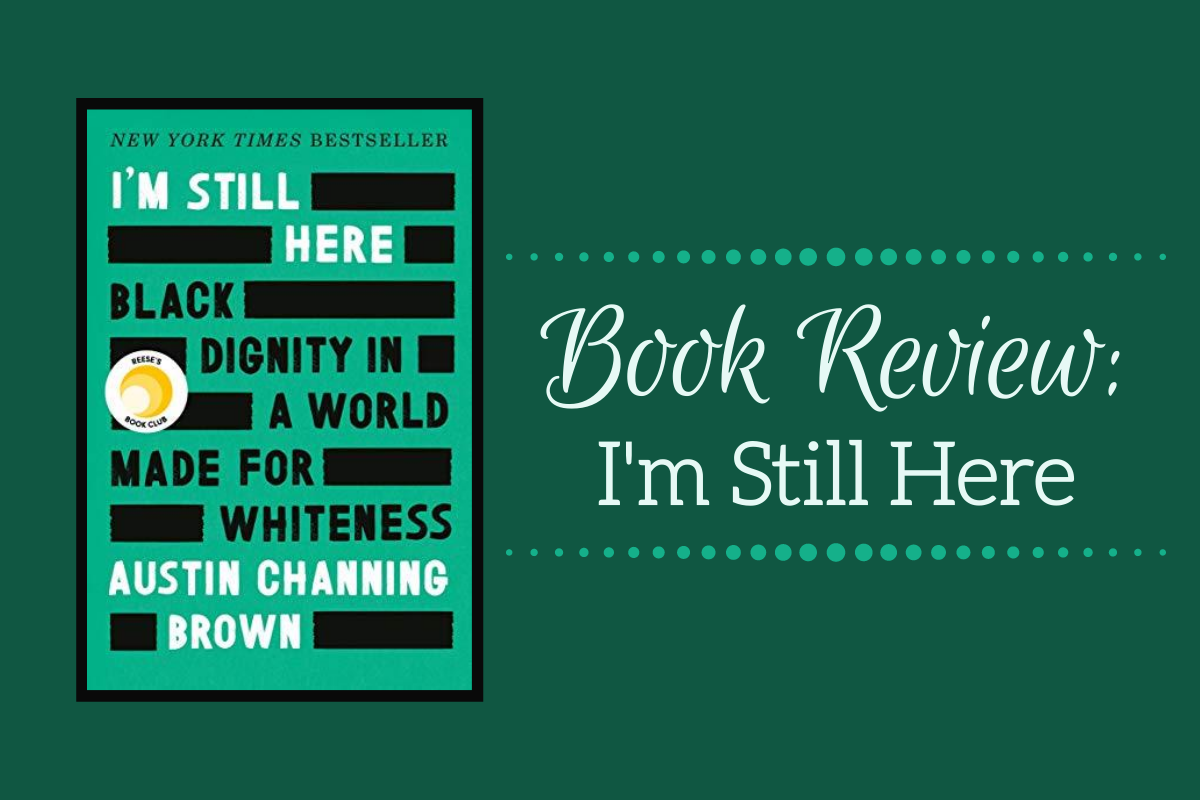 I’m Still Here: Black Dignity in a World Made for Whiteness by Austin Channing Brown (Convergent, 2018).

“White people can be exhausting,” says Austin Channing Brown in the first sentence of her book. “I don’t want to be exhausting,” I reply. “I want to be your friend.” But with every book and article I read in the subject area of race relations (White Rage, How to Be an Antiracist, The Color of Compromise, “The Case for Reparations,” and many more) I understand better how it’s not enough to be friendly. White would-be friends need to do a lot of self-educating about Black history, the history of racism, and the problem of structural racism. We need to listen to a variety of Black voices on these subjects. Brown gives us the opportunity to do just that in a memoir that is direct, painful, and depressing, but also beautifully written, extremely illuminating, and occasionally amusing.

Fourteen chapters, with titles such as “White People Are Exhausting,” “Nice White People,” “White Fragility,” “The Ritual of Fear,” and “Creative Anger,” are leavened with three additional “interludes” — short inter-chapters: “Why I Love Being a Black Girl,” “How to Survive Racism in an Organization that Claims to be Antiracist,” and “A Letter to My Son.”

A core idea, well-documented with specific examples in this book, is how being Black in “a world made for whiteness” is like walking with ankle weights. There are White forms of speech, White ways of interacting, White expressive parameters, White food, White love for cats, even, which are not intrinsically right or wrong, but which White people take for granted and to which Black people who operate in a White world have to accommodate themselves. I don’t accept White or Black homogeneity (not a cat lover) and neither does Brown, but it is certainly educational to read her observations on her own “typical” experiences.

I found Brown particularly illuminating in writing about the Black person in a majority (or even otherwise exclusively) White professional work setting. The Black person may have been hired with an eye toward making the company/organization more diverse. They may be expected to represent the Black voice, to explain Black perspectives on a range of issues. Or they may be expected to turn on a dime and act White, not stand up for social justice issues or whatever, but let their skin tone give the veneer of diversity to the organization. White people, on the other hand, almost never have to explain their whiteness, justify their preferences, or feel that they are representing the White community by whatever they do. They are free to be individuals.

Let me just give one extended quote to illustrate the kinds of points Brown makes and her style of making them. After clarifying that she is not speaking for every Black woman navigating White culture, she says “this is how being hired usually unfolds for me” (17-18):

“First, I am given a promise, usually from a supervisor, co-worker, or member of the hiring committee, that she is a safe person for me to talk to if anything racist happens. To make the promise of safety feel genuine, she admits that the organization isn’t perfect and assures me that I can share if there is ever an inappropriate comment, a wrong word… Second, I am given a brief account of the organization’s imperfections, a series of stories involving elusive people who no longer belong to the organization. The stories usually concern examples of ‘missteps’ — the time a white person ‘misspoke’ in a board meeting or when a racist email was intercepted by leadership — but they end on a note of hope, expressing how the organization reacted. We invited [insert name of famous Black person] to speak at our annual lunch. We launched an eight-week discussion group on [book by Black author].”

Brown goes on to note how if the Black professional does speak up regarding racial matters, the burden is often put back on her to defuse the situation, to be more forgiving or understanding, to be more of a team player. As a White person who wants to be a better Black ally, I appreciate it when Black colleagues speak up on such issues, but after reading the author’s explanations I am more aware as to why they may not choose to do so.

By the way, Brown capitalizes “Black” throughout her book and lowercases “white.” As an English teacher I am interested in the discussion about how to handle such capitalization. Language matters! Kwame Anthony Appiah, a professor of law and philosophy at New York University, does an interesting job of considering different perspectives on this issue in a recent column in The Atlantic. Appiah suggests that capitalizing both “Black” and “White” calls attention to their constructed — rather than factual and objective — identity, and in this review I have followed his practice. The Associated Press made a decision in June to change their style guide to capitalize “Black,” and just a few days ago they announced their decision to keep “white” in lower case, noting that “we will closely watch how usage and thought evolves, and will periodically review our decision.”

Brown’s final chapter is “Standing in the Shadow of Hope.” She discusses the reaction to Ta-Nehisi Coates’s book Between the World and Me, about how much of the public discussion about it had to do with whether Coates was too pessimistic about race relations in America. Brown notes that “talking about race in America is not usually a hopeful experience if you’re Black” (177). She says “I cannot hope in whiteness. I cannot hope in white people or white institutions or white America. I cannot hope in lawmakers or politicians, and I cannot hope even in pastors or ministries or mission statements… I cannot hope even in myself. I am no one’s savior” (179). Instead, she prefers to “rest in the shadow of hope,” which boils down to showing up and working toward equal respect and justice as a starting point for all people, whether it can be achieved or not.

Her thinking here is mirrored in a recent essay in The Atlantic (does this guy read anything besides The Atlantic?) by Jennifer A. Richeson, a 2006 MacArthur Fellow and the Philip R. Allen Professor of Psychology and the director of the Social Perception & Communication Laboratory at Yale University: “Americans Are Determined to Believe in Black Progress — Whether it’s happening or not.” Richeson points to research she and a colleague and their students have conducted which shows that people consistently and incorrectly believe, for instance, that the wealth gap between Whites and Blacks is substantially smaller than it was fifty years ago. She observes that “the mythology of racial progress exerts a powerful hold on our minds.” She notes that the summer of 2020 — with Black people dying disproportionately from the coronavirus, George Floyd’s death, and Black Lives Matter protests — has been a blow to America’s master narrative of racial progress. The myth of racial progress can lead us to incorrectly think such progress is automatic, that it doesn’t require continual vigilance and exertion, that it doesn’t require us to stick our necks out.

I am thankful to Austin Channing Brown for writing such a compelling book. It’s a quick read, but packed with valuable experience, reflection, and perspective. Reading it, and acting on what we learn, can help to make the world a better place.

Scott Moncrieff is a Professor of English at Andrews University. He is looking forward to teaching a class on the graphic novel and social justice in the Spring of 2021.