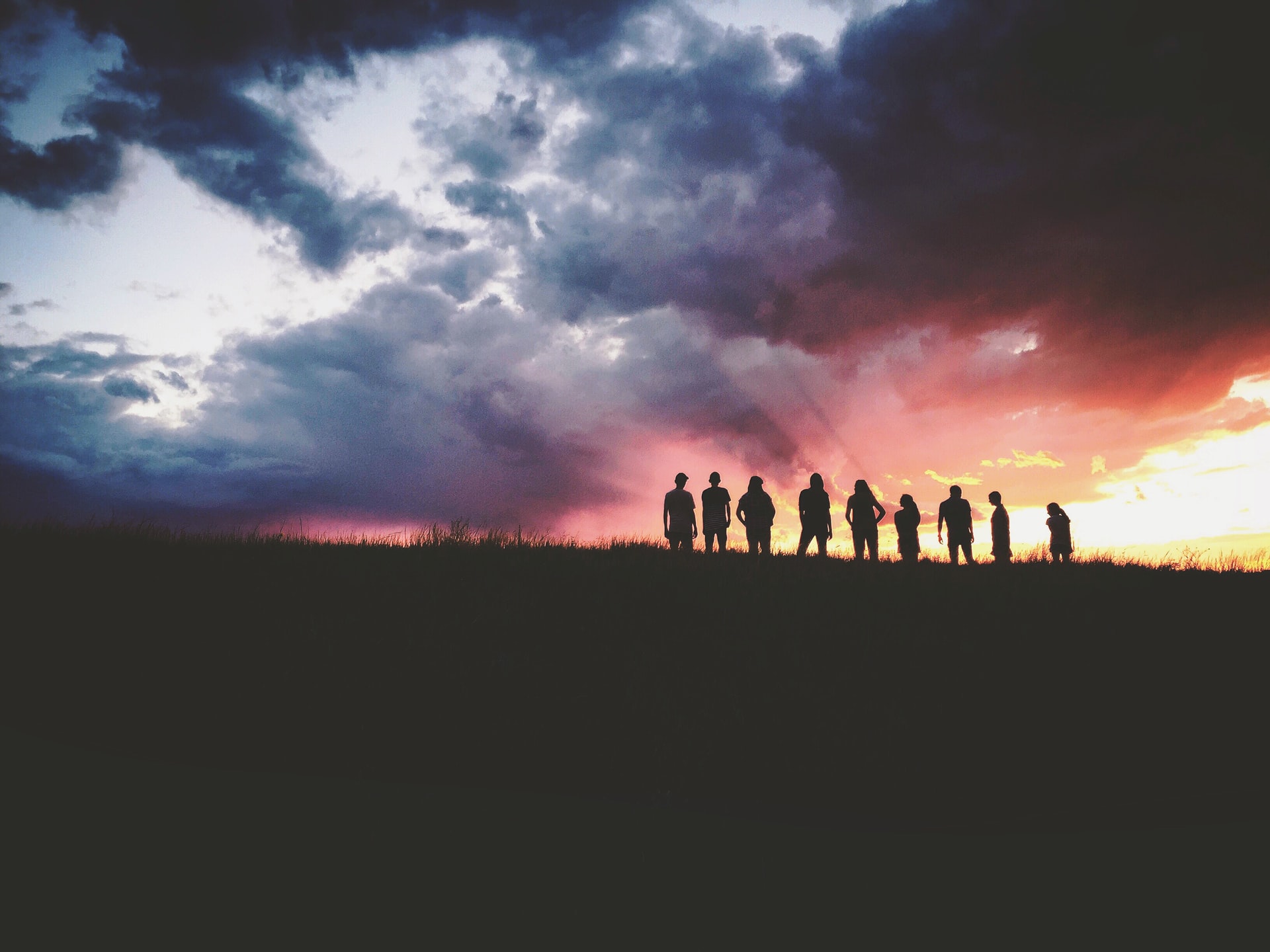 We keep banging away, trying to find God’s whereabouts in a time of plague. Raising the question is a backhanded way of keeping faith with God. After all, to ask where God is — metaphorically speaking — is to assume that God is. Perhaps that is enough. Gravity would still obtain, the world would continue to turn, wind and rain to sweep across the planet and stars to shine. Perhaps it doesn’t matter. And yet…

We require our truth-tests to apply, yet we jump at the latest conspiracy theory or rumor of scandal and disaster. Jesus knew this: “If anyone says to you, ‘Look, here is the Messiah,’ or, ‘There he is,’ do not believe it.”[2] He built in safeguards against our gullibility, against for-profit televangelists and other scam artists. When I return, he says, you’ll know it. You won’t need CNN. You’ll see my light come shining from the west down to the east.

We Christians often feel compelled to explain God’s absence when times get hard. Like Job’s friends, we are tempted to think we speak for God in the midst of someone else’s suffering. Where is God? Well, God is out there… somewhere. You just have to have faith.

In my youth I sporadically played the part of one of Job’s friends. The equations seemed clear, the outcomes predetermined. Sins, both willful and ignorant, equaled one’s downfall. When in doubt, consult the Bible, for therein lay the answers to life’s problems.

So I was told and so I did, hoping perhaps that the doing would result in the believing, and the believing would equate to faith. None of this was insincere; it was standard-issue, paint-by-the-numbers instructions for a daily walk with God. But it was brittle, and it shattered under the weight of life’s burdens. The God “out there,” unchanging and untouchable, incurs indifference once the fear of reprisal fades away.

“And what is faith?” asks the Book of Hebrews. “Faith gives substance to our hopes, and makes us certain of realities we do not see.”[3] How many invisible realities do we invoke every day? Trading on these realities, we assume they undergird the thin surface of our consciousness. We skate across it like water striders, trusting that the surface tension will not break. If we can move fast enough, maybe we won’t sink into the watery depths.

Hebrews seems to be written to people who suffered greatly for their faith. There are allusions to imprisonment, seizure of property, public humiliation, and abuse. Some of them were tortured; others were loyal to the tortured at risk to themselves. The author calls them to remember their past, when they first believed — and suffered for it. “You need endurance,” he writes, “if you are to do God’s will and win what he has promised.”

From Abel to Enoch to Noah to Abraham, Hebrews 11 serves up a tribute to the faithful. Sarah, Abraham’s wife (and half-sister) gets several verses commending her judgment that God would keep his promise to her. She would conceive even though she was — delicately put — “past the age,” and Abraham was — less delicately — “as good as dead.” From them would spring descendants “as numerous as the stars” and as countless “as the grains of sand on the sea-shore.”

The writer pauses to take a breath. “All these persons died in faith,” he writes. “They were not yet in possession of the things promised, but had seen them far ahead.” There follows another panegyric to Isaac, Jacob, Joseph — stalwarts of faith, despite Jacob’s craftiness and deception and Joseph’s nearly murderous revenge on his brothers. Moses gets the greatest coverage, from his birth when his parents hid him in defiance of the pharaoh’s edict, to his rise to power in the royal family.

The Book of Hebrews glosses his suddenly fugitive status when he fled the kingdom because of an intervention that became a murder. “By faith he left Egypt,” says the author, “and not because he feared the king’s anger; for he was resolute, as one who saw the invisible God.”

What did he see? A bush, bright with fire and a voice that called to him, “Take off your shoes. The ground upon which you stand is holy.” “Who are you?” asks Moses. “I am,” says the Voice, a name that encompasses time past, present, and future — and all space.

He saw a cloud that guided the ragged band of Hebrews through the Sinai desert and a pillar of fire that protected them by night. He saw a rock that gushed water, oases in the wilderness, and in one cataclysmic encounter atop a quaking volcano, he witnessed the hand of God scoring on stone rules for life.

“For indeed our God is a consuming fire.”

“Thinking about God begins at the mind’s rugged shore, where the murmur breaks off abruptly, where we do not know any more how to yearn, how to be in awe,” says Rabbi Abraham Heschel.[4]

Why have we lost this ache of yearning? We could venture that we are inundated with images, strings of unanswered questions, emails piling up, anxieties layering like coats tossed on a spare bed, the cacophony of political hounds setting up a howl, bravado laced with fear, weariness from caution. All of this would be true.

But there is more. We are embarrassed; we embarrass ourselves, pausing with the remote in hand before slumping back with another contrived reality show. Those four a.m. questions — “all the huge strange thoughts inside you going and coming and often staying all night”[5] — are the dangling threads which unravel our passive indifference. “Only those who know how to live spiritually on edge will be able to go beyond the shore without longing for the certainties established on the artificial rock of our speculation,” says Heschel.[6]

At the heart of Heschel’s philosophy of religion is the ultimate question, the sense of the ineffable, “the awareness of a reality that discredits our wisdom, that shatters our concepts.”[7] This is the “I AM” of Moses’ experience, the stillness at the center of the whirlwind within which Elijah fought with his own despair. This is the Being from whom Jonah was fleeing, but who met him at Nineveh. This is, for us, stranded in the twenty-first century, the stuff of legend.

How can we comprehend such a Being? Our common mysteries are problems we have not yet solved, with facts that are discoverable and verifiable, for ends that are practical. We have little time or patience for awe or wonder. We begin with the reasonable, that which appeals to our sense of order, which is, in fact, in alignment with what we expect. Expectation rules perception; we do not see what we are not looking for. We will not be surprised; we are in control.

When we ask, “Where is God?” it’s usually when our backs are against the wall and we’ve lost control. When the air is calm, the sun lies bright upon the sea, all the world lies before us — the question does not come up. We become deists in practice: somewhere God is about his business, calmly working through his list for the day, smiling as he remembers our first trembling steps.

In our pain, however, we do not separate our image of God from that of absolute power. We want that power at our disposal, like calling in the coordinates for an air strike of fire from the heavens. This is God-as-object, regarded from afar. The hallmarks of this God are distance and difference, applied not with awe and gratitude but with the underlying resentment of inferiority.

“Those to whom awareness of the ineffable is a constant state of mind,” says Heschel, “know that the mystery [of God] is not an exception but an air that lies about all being, a spiritual setting of reality; not something apart but a dimension of all existence.”[8] We know this as Immanuel, God-with-us.

“The answer to Job’s long battle of words,” says John Taylor in The Christlike God, “is not a theodicy or justification of God, but a theophany, a revelation of God. To most people who receive such a revelation it comes not as a vision but as the quiet, unlooked-for gift of absolute certainty that God loves them.”[9]

In the last months of his life, Dietrich Bonhoeffer wrote from Tegel Prison in Berlin to Eberhard Bethge, sketching out what he called a “this-worldliness Christianity.” He wrote, hoping to be released to his family and the woman he loved, but knowing that death, a violent one, was ever present. What he meant, he explained, was “living unreservedly in life’s duties, problems, success and failures, experiences and perplexities. In so doing we throw ourselves completely into the arms of God, taking seriously, not our own sufferings, but those of God in the world — watching with Christ in Gethsemane. That, I think, is faith…”[10]

This is the God of now, not of crushing power, but of solidarity in suffering. Not in the heavens, but with us here on Earth, closer to us than the “vein in our neck,” as the Qu’ran puts it.

“Sometimes God moves loudly,” writes Annie Dillard in For the Time Being, “as if spinning to another place like ball lightning… Sometimes en route, dazzlingly or dimly, he shows an edge of himself to souls who seek him… Such experiences are gifts to beginners.”[11]

As a beginner, I have sent this out as a message in a bottle. “To the One who knows me better than I know myself: I am here. And if I am here, then You must be too, for I am believing that all things and all of us are in You in some way that is mysteriously real, so real that nothing in death or life, this world or the one to come — nothing can separate us from the love of God.”

Photo by Hudson Hintze on Unsplash