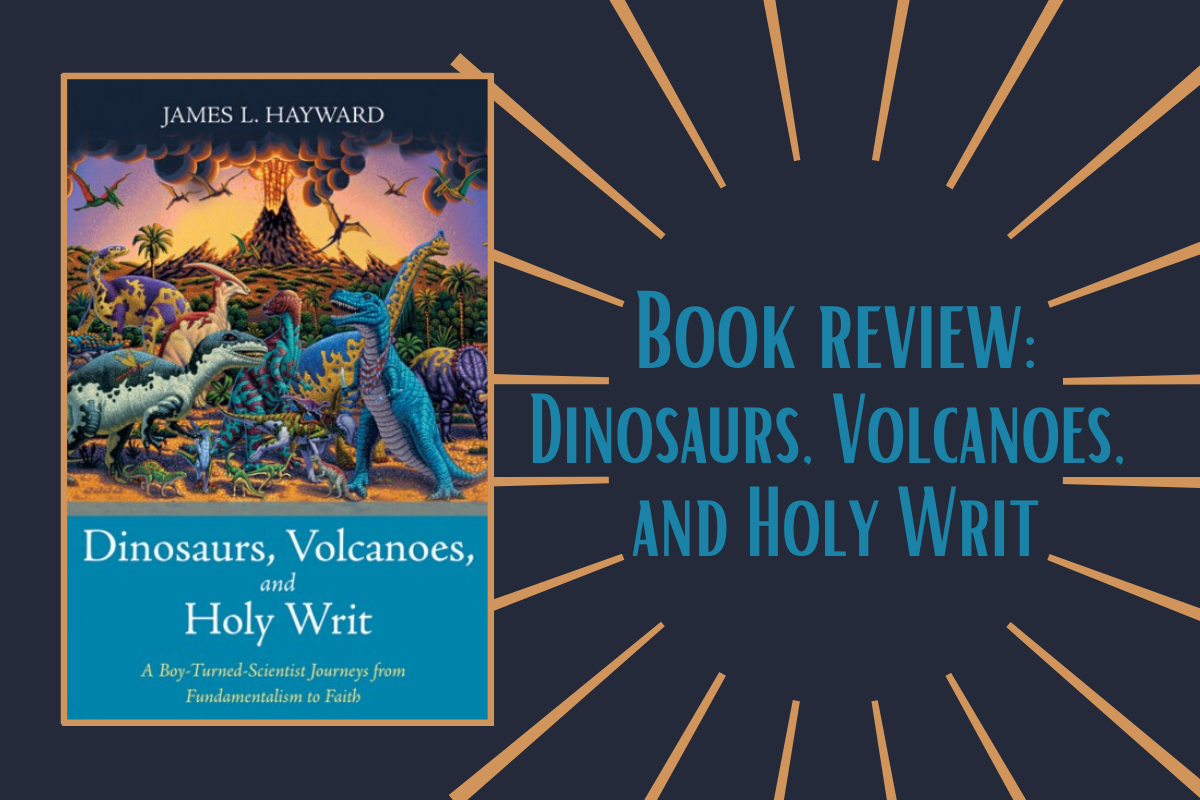 In this evocative and engaging memoir of an Adventist biologist, James L. Hayward tells the story of his evolution from a young-age creationist to a science-embracing theist and a productive member of the mainstream scientific community. After teaching stints at Southwestern Union College, Walla Walla College, and Union College, in 1986 he joined the biology faculty at Andrews University, from which he retired in 2015.

The son of a conservative Adventist minister, young Hayward fully embraced the fideistic, anti-intellectual worldview typical of most Seventh-day Adventists. As a student at Southwestern Union College, he “remained a staunch defender of young-age creationism and continued to believe in a worldwide flood, but… was beginning to appreciate the importance of physical evidence as a control on the limits of belief” (33). Prompted by a personal examination of the ballyhooed Paluxy River footprints, which many prominent creationists interpreted as showing that dinosaurs and giant humans lived contemporaneously, Hayward “began to recognize that Christians, including members of my own faith community, were not necessarily persons of integrity, and that belief often trumped evidence” (40).

In 1970 Hayward transferred from Southwestern to Walla Walla College, where he “continued to identify with traditional notions” but found himself “creeping ever so cautiously out of the fundamentalist camp” (46). In the fall of 1972, he moved on to Andrews University to earn a master’s degree in biology. There he encountered Richard M. Ritland, a Harvard Ph.D. in comparative anatomy with an interest in paleontology who had recently moved from the Geoscience Research Institute to the Andrews biology department. Hayward signed up for a course in paleontology with Ritland, who introduced him “to the geological column and the types of fossil organisms found at each level…. The most important concept I learned in paleontology was that as one goes to deeper levels of the geological column, the types of fossil organisms become progressively more dissimilar in comparison with those alive today” (59). From Ritland, Hayward also learned that the ancient fossil forests of Yellowstone National Park, stacked one upon another, apparently had grown in succession over long periods of time rather than having been deposited during Noah’s flood, as young-age creationists taught (60-61). His brief period at Andrews studying with the open-minded Ritland and interacting with the progressive young members of the Geoscience Research Institute turned out, in retrospect, to be “life-changing” (66).

In 1978 Hayward enrolled as a doctoral student in the zoology program at Washington State University, where he took up the study of shorebirds and four years later received his Ph.D. degree. While doing fieldwork on the nests and eggs of gulls in eastern Washington in the spring of 1980, Mount St. Helens erupted, dumping tons of ash on the objects he hoped to study. This turned out to be a blessing in disguise, because he subsequently discovered “entire nests and eggs preserved beneath the ash,” which led to his interest in the fossilization of dinosaur eggs, and in dinosaurs generally. For an Adventist scholar, this was hazardous ground, because, as Hayward observes, many fellow believers doubted the very existence of these reptiles “or regarded them as ‘inventions of the devil’” (80). Nevertheless, Hayward took it on himself to educate Adventists on this controversial topic, publishing articles in Adventist Review, Spectrum, and Journal of Adventist Education.[1]

By the turn of the century, Hayward had become the leading SDA authority on dinosaurs, but, if one counts paleontologists with an Adventist background, he was neither the first nor the most influential. Earl Douglass (1862 -1931) grew up Adventist in Medford, Minnesota, later becoming superintendent of the local Sabbath School and, briefly, a colporteur. As an undergraduate and graduate student, he developed a fascination with fossils, which became his lifework and accelerated his drift out of Adventism. In 1902 he moved to Pittsburgh, where he became a star collector for the Carnegie Museum of Natural History, specializing in discovering dinosaur skeletons in the West. While exploring in northeastern Utah in 1909, he uncovered one of the richest dinosaur fossil beds in the world. Recognizing its unique value, the president of the United States six years later declared the site a national monument.[2]

Hayward devotes the bulk of his book to describing his growing scientific interests and his corresponding rejection of fundamentalist Adventist beliefs. Along the way he credits various SDA scholars for exposing the spurious claims of Ellen G. White and for demonstrating the unreliability of the Genesis genealogies as a basis for geochronology (70-76). His lifelong study of the fossil record taught him that “most biblical stories took place on the presently recognizable landscape of the Holy Land, which sits atop a vast and complex set of rocks that involved many long-term processes” (160). He tells us much less about his retention of religious faith in the face of so many intellectual challenges. Through the years he held firmly to “a belief in divine creatorship,” while declining to provide “details of what that might mean in terms of earth history” (77). He came to see the Bible not as God’s infallible word but as consisting “of writings by people who, like me, were searching for meaning and a better understanding of reality and the sacred” (118). “Faith,” he concluded, “should be consistent with physical reality, not contradictory to it” (101). God, in his evolving worldview, became “ineffable,” incapable of being described in human words (146).[3]

Hayward excels at explaining scientific ideas. In contrast, his theological beliefs remain somewhat elusive. Nominally Hayward identifies as a Christian, because he aspires to follow “the teaching of Jesus” (200). At one point near the close of his book he explains that the “biggest reason for why I believe in a larger reality… is simply that we exist” (193-94). Is this “larger reality” related to the Judeo-Christian God? He denies that he’s “a young-age creationist, flood geologist, or biblical literalist” as well as “an atheist, deist, materialist, theistic evolutionist, or many of the other philosophical ‘-ists’” (201). Although he explicitly opposes the belief that God is directly involved in the evolutionary process, his rejection of theistic evolution came as a surprise to me. The theistic evolutionists I know would, I suspect, unhesitatingly embrace him as a fellow believer. All thoughtful Adventists interested in the intersection of science and religion should read this faith-affirming, if unconventional, book.

[2] T. Joe Willey and Ronald L. Numbers, “The Adventist Origins of Dinosaur National Monument: Earl Douglass and His Adventist Roots,” Spectrum 43 (Winter 2015): 48-56. Another ex-Adventist, Kirk Johnson (1960-), went from a creationist schoolboy in Seattle to become one of the leading paleontologists in the country, currently serving as Sant Director of the Smithsonian’s National Museum of Natural History, home of the largest fossil collection in the world. Among his areas of expertise is the extinction of the dinosaurs. See Kirk Johnson with Ray Troll, Cruisin' the Fossil Freeway: An Epoch Tale of a Scientist and an Artist on the Ultimate 5,000 Mile Paleo Road Trip (Golden, CO: Fulcrum Publishing, 2007), esp. 110-11, which mentions his SDA background.

[3] In some ways Hayward reminds me of the prolific popularizer of science and mathematics Martin Gardner (1914-2010), who in his youth briefly joined the Seventh-day Adventist Church and embraced the flood geology of George McCready Price. Subsequently he lost his faith as an undergraduate at the University of Chicago and became one of the most respected sceptics in the United States. Nevertheless, he remained a theist, believing in a personal God, to the end. See his The Whys of a Philosophical Scrivener (New York: St. Martin’s, 1983). See also his semi-autobiographical novel, The Flight of Peter Fromm (Los Altos, CA: W. Kaufmann, 1973).

Dinosaurs, Volcanoes, and Holy Writ is available on Amazon in paperback and Kindle, or directly from the publisher.

He has published over 25 scholarly books dealing with the history of science and medicine. His pioneering work, Prophetess of Health: A Study of Ellen G. White, led to a revolution in Ellen White studies within the Seventh-day Adventist denomination. His forthcoming book on the physician Dr. John Harvey Kellogg, an influential but controversial figure in Adventist history, is under contract to Harvard University Press.