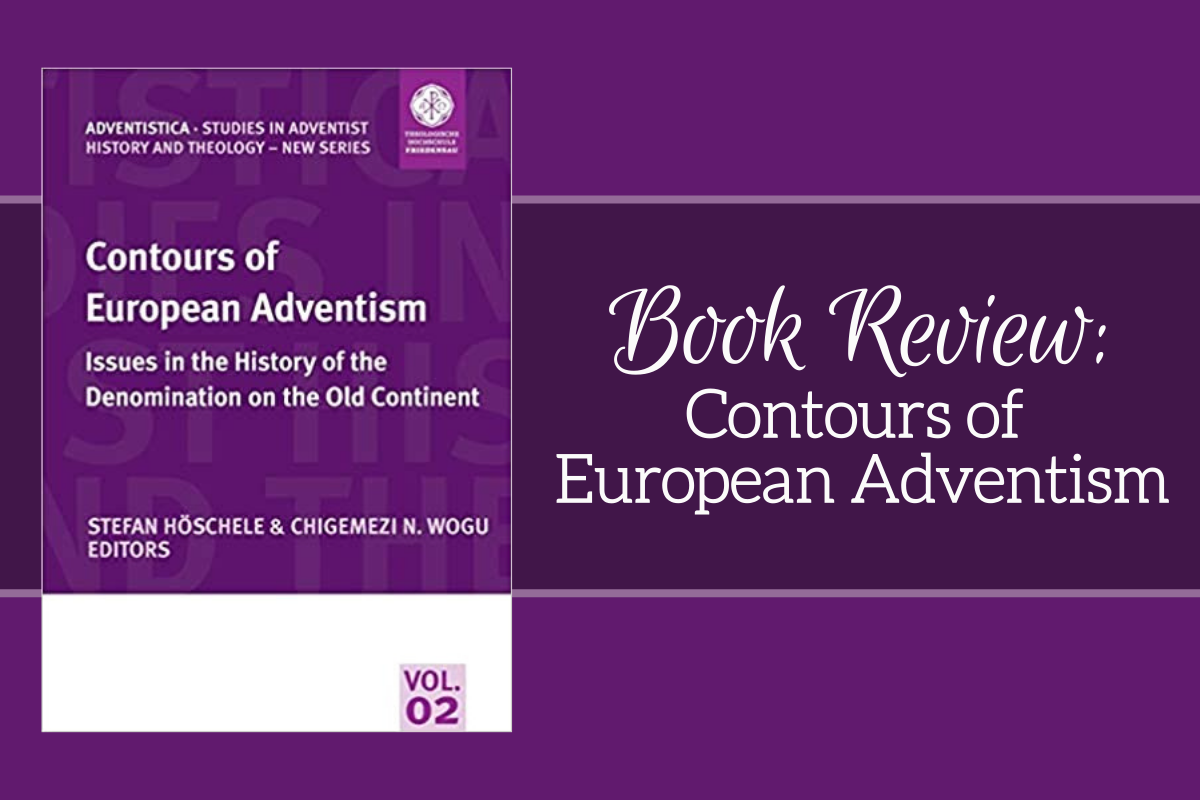 Contours of European Adventism: Issues in the History of the Denomination on the Old Continent, edited by Stefan Höschele and Chigemezi N. Wogu, is available from Amazon.com and the BoD Buchshop.

Adventists in the 47 countries of the European subcontinent make up less than 2% of the global church and are extremely marginalized in terms of proportional numbers within their own nations. So what can Adventist European history, practice, and theology give to the rest of the global church? Contours of European Adventism: Issues in the History of the Denomination on the Old Continent is a collection of essays edited by Stefan Höschele & Chigemezi N. Wogu based at Friedensau Adventist University bringing together some of the most cutting-edge scholarship on Adventism in Europe. The essays provoked, puzzled, and inspired me — addressing questions I will likely need to confront at some point in my own culture as the United States experiences increasing secularization.

It behooves us to pay attention to the particular expressions of our church globally. No one place can serve as a model for the rest of us, but being attentive to the specificities of place and time can provide us with a richness of companionship as we participate in the transformation of our church across time and culture. Ronald Lawson’s chapter in this volume is a sociological study of the impact of immigration on the churches in Britain, France, and the Netherlands. Lawson’s narrative, combined with Michael Pearson’s essay on the “geography of the heart,” tugged at my emotions. Each of them revealed the deep desire of Adventists to have a church that expresses their own national culture and place, while acknowledging the fact that we are all strangers and aliens and belong to a global denomination that points us to the soon-coming reality of the New Heaven and the New Earth. Lawson’s study of the conflicts that came with the transformation of the English and French churches from indigenous to an immigrant denomination is one that any church in globalizing community needs to take on board. There were no good “answers,” merely articulation of what is true and a bearing witness to what has happened.

Many of the essays are based on scholarship that is only now available with the releasing of military and political records since the fall of Communism. They chronicle the challenges of various Eastern European Adventist churches with their state governments during the World War I and II periods as well as during the Cold War. These are stories of survival as well as disappearance, of compromise as well as standing strong and martyrdom. As someone who grew up with the idea that persecution and martyrdom tend to grow the church, it was challenging to read about the disappearance and decline of Adventists in these places. However, the authors of these histories of oppression and suffering consistently pointed to the inspiration provided by the faithfulness of the Adventist clergy and lay men and women. The persistence of the church in spite of both state opposition under authoritarianism and decline during times of liberal secular relativism is indeed remarkable.

Most fascinating to someone from the diverse religious and cultural marketplace of the United States are the chapters on the relationships Adventists have had with their national governments and political organizations. Marianne Thieme’s description of her joining the Adventist Church while she was (and remains) the leader of a political party in the Netherlands was fascinating and encouraging. The Italian church’s negotiations with the state regarding military combatency and the concomitant influence that those discussions had on the church itself encouraged me regarding the continued importance of our non-violent tradition. Tiziano Rimaldi’s history of that movement included long-form quoting from the late twentieth century documents in which young Italian Adventists suggested that it was too bad that their church required adherence to teetotalism as a test of membership, but left keeping the 6th commandment to the members’ own conscience. The call of so many of these scholars is to keep in mind the tradition of Adventist suffering for their commitment to non-violence, Sabbath-keeping, and religious education. Those of us who live in the time of great freedom are ironically often less likely to value those practices.

In the conclusion of the volume, Rolf J. Pöhler points out that Europe is unique in the world context for simultaneously having a Christian (and even more specifically Reformation) heritage which is vital to its identity and a radically secular contemporary culture. It combines a current commitment to individual freedom with a history of persecution of minority Christian groups. Adventists have a history of personal martyrdoms and suppression in Europe, but the wide ranging secular freedoms in most European countries today seem to contribute to a declining interest on the part of young people in remaining part of a sectarian community like the Adventist Church. The scholarship here can point at the creative missiology and stubborn persistence that being a minority within a minority can give us.

Many of the scholars who participated in this volume are also authors in the newly released Encyclopedia of Seventh-day Adventists. I commend this volume to you, and hope that some of you will support Adventist scholarship by purchasing a copy for yourselves or perhaps as a gift.