Book Review of Jemar Tisby’s The Color of Compromise

Book Review of Jemar Tisby’s The Color of Compromise 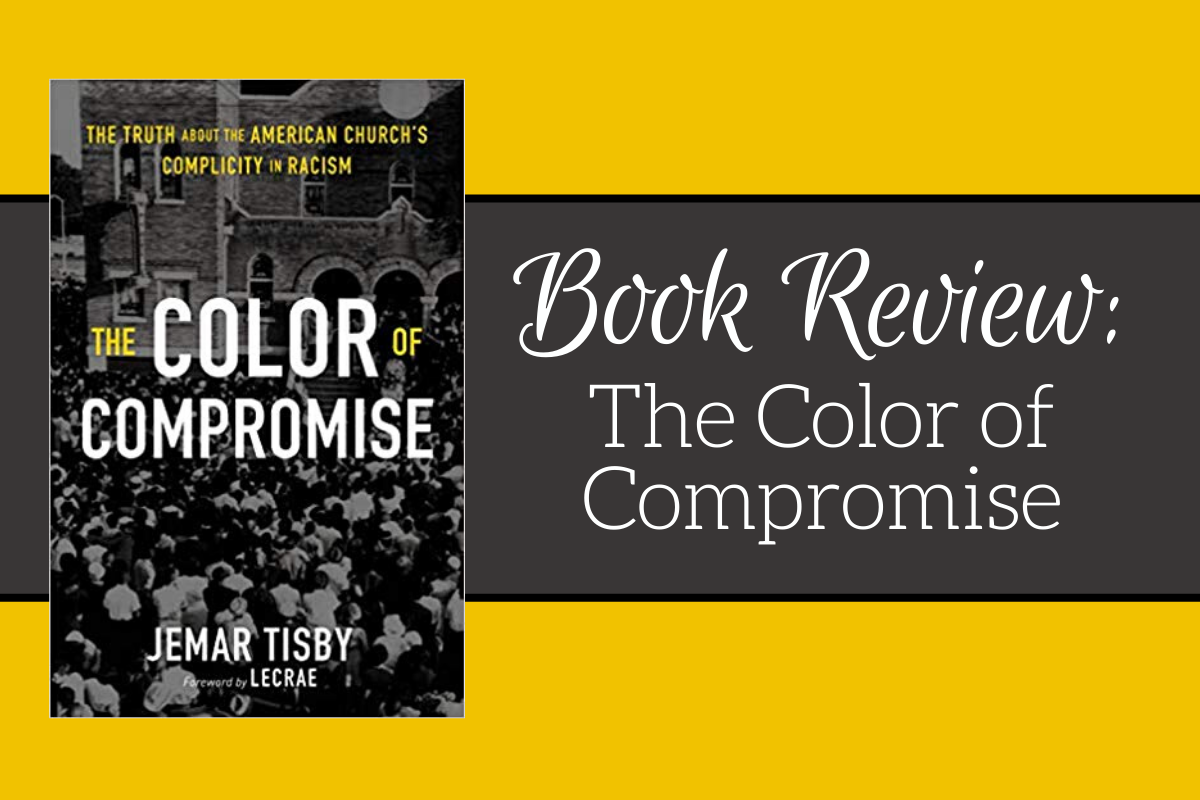 I didn’t know about Jemar Tisby, prior to his recent appearance as a speaker at Andrews University, and in case you don’t know him either, I will include his brief bio (from the book jacket):

He “is the president of The Witness: A Black Christian Collective, where he writes about race, religion, politics and culture. He is also cohost of Pass the Mic podcast. He also speaks at conferences nationwide and has written for The New York Times, The Atlantic, and CNN. He is a PhD candidate in history at the University of Mississippi, focusing on race, religion, and social movements in the twentieth century.” The Color of Compromise: The Truth About the American Church’s Complicity in Racism (Zondervan, 2019) is his first book.

In just over 200 pages, Tisby covers a lot of ground. After an introductory chapter, he has eight chapters giving a quick historical survey of racism in the United States from the colonial era to the present, particularly focusing on how the church (Protestant and Catholic) intersected with this history. Separate chapters focus on the Revolutionary War period and the writing of the Constitution, the antebellum period, the Civil War, Reconstruction, the Jim Crow era, the Civil Rights movement, the organization of the Religious Right at the end of the twentieth century, and the Black Lives Matter era, leading up to the present day. A final chapter considers appropriate actions for institutions and individuals to bring about fuller racial justice.

I have read a number of recent books having to do with the United States’ history of racial injustice, so seeing repeated examples of racist policies — not to mention racist violence — to maintain white supremacy was nothing new. What Tisby contributes to this sorry history is a consistent focus on how church actions, policies, and members have been consistent supporters of racism, from the beginning of the country to today — not all white church members, of course, but a significant number, a number without which racism could not continue in anything close to its present extent.

In his first chapter, Tisby quotes a white lawyer named Charles Morgan Jr., from a speech he gave to the all-white Young Men’s Business Club in Birmingham, shortly after the 1963 church bombing in Birmingham which killed four young black girls:  “all the city’s white residents were complicit in allowing an environment of hatred and racism to persist” (14). In this quote, and in his larger message throughout the book, Tisby argues that Christian whites need to do much more than refrain from committing violence against their black brothers and sisters. Christians need to be actively antiracist, to use a term gaining traction in the wake of Ibram X. Kendi’s recently published How to Be an Antiracist.

Allow me to present a few examples of church complicity in racism from American history, as recounted by Tisby. Although all of us are generally aware of our country’s racist past, when we see a parade of specific examples it’s almost guaranteed to be worse than we thought it was. And unless we understand the gravity of our historical legacy we will underestimate the challenges of the present and the need for continued activism.

In 1667, the Virginia General Assembly decided that “the conferring of baptism does not alter the condition of the person as to his bondage or freedom” (25). Welcome to 200 years of trying to accommodate Christianity within a slave-owning society. A draft of the Declaration of Independence “denounced the transatlantic slave trade” but “was excised from the final draft of the declaration due to the objections of delegates from Georgia and South Carolina as well as some northern states that benefited from slavery” (42).  Famous colonial preachers George Whitefield and Jonathan Edwards owned slaves (48-51). In 1846 St. Philip’s, the first black Episcopal parish in New York City, applied to be admitted to the regional association of Episcopal churches. The committee that reviewed and denied its application explained as follows: “They are socially degraded, and are not regarded as proper associates for the class of person who attend our convention” (56). Around the time of the Civil War, Methodists, Baptists, and Presbyterians all split into northern and southern factions over the issue of slavery. Southern Methodists insisted on allowing slaveholding bishops while Southern Baptists allowed slaveholding missionaries (76-80).

Tisby is quick to point out that racism was not merely a Southern phenomenon, but spread from sea to shining sea, pointing, for instance, to segregation at the Chicago World’s Fair in 1893 (111), and segregation at Christian-founded Pepperdine College (now University) a little west of Los Angeles: during its first ten years, beginning in 1937, Pepperdine admitted black students but did not allow them to live on campus (121).

During the Civil Rights era, Tisby says, summarizing the evidence he has presented, moderate Christians “organized to oppose racial integration of neighborhoods, started segregation academies to keep their white children separate from black kids in schools, and continued to approve of church leaders who espoused prejudiced remarks and actions” (151).

Coming to the last quarter of the twentieth century, Tisby documents how the rise of the religious right and the Moral Majority had significant grounding in racism. He quotes Republican political consultant Lee Atwater on how Nixonian politics found ways to talk about racist policies without using explicitly racist terminology (152-153), so-called “dog-whistles.” This coded race-speak was carried on by Ronald Reagan and later Republican administrations under the names of law-and-order, the drug war, Reagan’s popularization of the term “welfare queens” to discredit government assistance to the poor, and so on. Of particular interest to Adventists might be the challenges to the tax exempt status of schools that had racially discriminatory policies. Bob Jones University was perhaps the most notorious of these schools, prohibiting interracial dating until 2000, but there were plenty of other Christian schools that had such policies in the forty years previous.

Those who wish to read more particularly about racist policies and incidents in the Adventist church (and the Adventist educational system) should have a look at Calvin B. Rock’s Protest and Progress: Black Seventh-day Adventist Leadership and the Push for Parity (Andrews University Press, 2018), which was reviewed last year in Spectrum. Just as one example to put Adventist matters in correlation with the larger American church, Rock prints an “emergency” letter written by an Adventist pastor in the Arizona Conference in 1978. This white pastor expresses alarm that even though Adventist schools in the conference are “open to all races to attend,” they will not meet racial quotas required by the government to maintain tax exempt status. A black conference member and public school teacher, Samuel L. Bond, responded to the white pastor’s letter by noting that “While the sixteen elementary schools, and the one senior academy of our conference are open to minority students it is glaringly true that not one of them has even one Black professional on its teaching or administrative staff. Neither is there an affirmative action program on foot to correct this situation” (Rock, 87-88). From even a cursory reading of Rock’s book, it is clear that the vast majority of white Adventists never felt the urgency of black Adventists for true social justice.

At Andrews University, where I work, we had a shakeup with the viral “It’s Time AU” video in February, 2017, in which students protested past grievances such as forced segregation in the cafeteria, to present concerns such as lack of black administration and faculty more proportional to the percentage of black students. In response, our University released a video acknowledging the legitimacy of the protest, and began a search process leading to the hiring of a Vice President of Diversity and Inclusion, Michael Nixon. And it so happened that only a week or so after Spectrum asked me to review Jemar Tisby’s book, Tisby, at the invitation of VP Nixon, happened to be speaking on the Andrews campus for a weekend series based on ideas in his book. So, change can happen, but it requires much ongoing intentional effort, including effort by whites to change the system of which they have been the “beneficiaries.” I put “beneficiaries” in quotes because any system of racial injustice is ultimately bad for everyone.

Turning back to The Color of Compromise, in the current era Tisby notes how the Republican party has identified itself — not exclusively, but in large part — with whiteness, with conservative Christianity and leaders such as Franklin Graham and Jerry Falwell Jr. taking an active role in promoting President Trump. According to the Barna Research Group, only 13 percent of evangelicals said they supported the message of the Black Lives Matter movement, compared to 27 percent of adults overall and 45 percent of millennials (183). Tisby has a nuanced view, in that he acknowledges occasional instances of courageous institutional or individual antiracist action, but always against a larger backdrop of white indifference and inaction. Likewise, he does not make total generalizations about either political party, but points to specific actions by both that improve or degrade racial equity.

In his last chapter, Tisby suggests a number of personal and institutional actions to consider in increasing social justice. For individuals, these include starting “by increasing your awareness of the issues and the people involved” (194), talking with people you know from a different race or ethnicity about their experiences and perspectives on race and justice (195), and hanging out in some new places where you will have a chance to meet people who are different from yourself (196). Finally, there’s the imperative to act to support racial justice: write, donate, join an organization, vote for policies and politicians that explicitly support racial justice (196-197).

Institutionally, Tisby supports reparations, citing Matthew 5:24 and points to precedent with Germany’s payments to Holocaust survivors and the United States’ payments and apologies to American citizens of Japanese background interned in camps during World War II (199). Tisby also suggests ideas such as looking into debt forgiveness, investing in trust funds for black youth, supporting tuition for black students, financially supporting black ministries, supporting local public schools with predominantly black student bodies, taking down Confederate monuments, studying black theology more extensively, and starting a new seminary that is antiracist from the beginning, with a diverse Board of Trustees, faculty and staff, a diverse curriculum, including study of the history of the church in a racial context and field trips to sites of historical interest having to do with black experience, and making Juneteenth, June 19, the day in 1865 when slaves in Texas learned about emancipation, a national holiday (207). In other words, there is plenty that can still be done to improve racial justice in this country.

If this seems like a big ask, Tisby reminds us of Joshua’s charge to “be strong and courageous” in the face of seemingly overwhelming challenges (Joshua 1:6-7, 9). It’s challenging and sobering to educate ourselves about and act for social justice, but it’s the price we all need to pay to create a better society here and to prepare for citizenship in God’s kingdom.