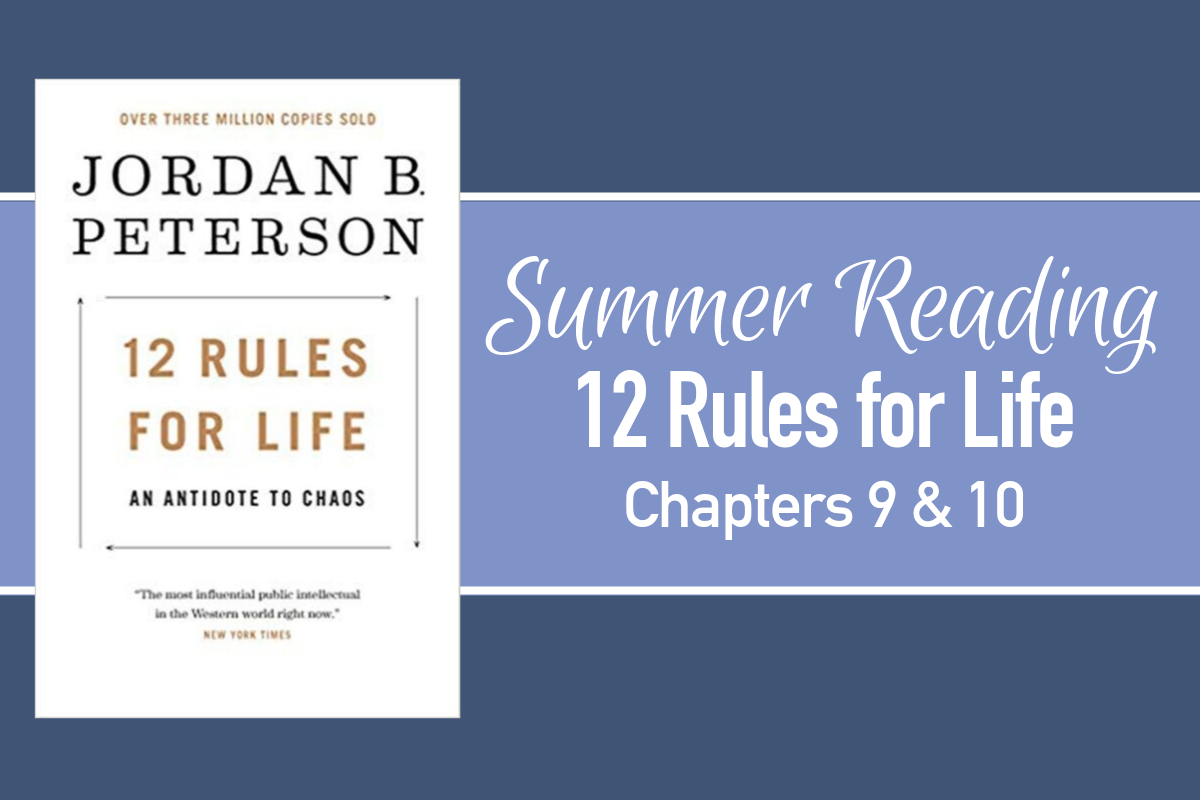 This is the sixth post of Spectrum’s 2019 Summer Reading Group. Each post will be drawn from chapters of the book 12 Rules for Life: An Antidote to Chaos by Jordan Peterson. You can view the reading/posting schedule here.

Pete Buttigieg, the young mayor of South Bend, Indiana, is an unlikely presidential contender and yet he has captured my imagination because his candidacy is summed up so well by his logo based on a Midwestern bridge. We have had enough divisive talk of walls. It is time to build some bridges, both literally and figuratively.

I worry that the divide over political and religious issues has become so vast that we can’t even communicate with those on the other side. In the past, as long as we could agree on the facts, we could at least discuss our different perspectives and interpretations. This is where true postmodernism shines in that it provides the tools to help us deconstruct dominant narratives, check our own privileged perspectives, and see things from other viewpoints. However, there is an increasing tendency to treat facts as ignorable, malleable, or even just offer alternatives. This relativistic caricature of postmodernism is just as dangerous as religious fundamentalists and conservatives used to say it was and should be opposed just as vehemently as fundamentalism itself.

Into this gap steps Peterson’s ninth rule, “Assume that the person you are talking to might know something you don’t” (256). This rule more than any other explains why I chose to read Peterson’s book together even though I find him intolerable. He might know something I don’t and I’d like to find out what that is. We might know some things he doesn’t and I’d like to hear those in response, too. If we are going to bridge our gaps, this is a good way to start but this rule alone won’t get us all the way.

Since Peterson goes on to describe his psychoanalytic approach in this section, I was hoping to have someone trained in psychology write this review. But, perhaps that would have been unnecessary since as Peterson admits, no matter the theory or basis of the therapist’s approach, just the fact that they offer a way to organize our scattered minds is immensely helpful.

Peterson shares the story of a young woman who made the shocking claim in a psychotherapy session that she thought she might have been raped… five times. He goes on to describe how easy it would have been for him to manipulate the situation to fit his ideology. If he were the adherent of a “left-wing, social-justice ideology,” he would have thought the following: “I could say that her suspicions of rape were fully justified…. she had indisputably been subject to violent and illicit acts, unless she had consented to each sexual move explicitly and verbally… she was an innocent victim” (239). On the other hand, if he were the adherent of a “conservative ideology” (which his less-weighted description suggests he might be) he would have thought this: “I could tell Miss S that she is a walking disaster…. she is a danger to herself and others… if she goes to singles bars and drinks too much and is taken home and has rough, violent sex (or even tender, caring sex), then what the hell does she expect?”

Either approach would have foisted his own ideology onto her impressionable mind and organized her life both in the past and going forward from that point on around either a liberal or conservative framework. That, he says, would have been adverse. Instead, he decided to listen and in doing so let her listen to herself. In this way, she could organize her thoughts and come to a better understanding of just what happened to her. Though he admits that even after many sessions the situation remained ambiguous.

This approach may feel frustrating. Those of us who understand that the Me Too movement is based on a systemic problem where certain patriarchal males assume that they can leer at women and access their bodies with impunity will find his lack of advocacy appalling. Those of us who believe in personal responsibility and accountability for one’s own actions will find his lack of calling out her poor choices and dangerous accusations unconscionable. She left therapy with him “somewhat less ill-formed and vague” than when she had first met him but at least Peterson says, “she didn’t leave as the living embodiment of my damned ideology” (240).

And yet, despite the discomfort, this process of listening without proselytizing is the next step in forming a bridge. How then should we listen? Peterson suggests following Carl Rogers’ method where “Each person can speak up for himself only after he has first restated the ideas and feelings of the previous speaker accurately, and to that speaker’s satisfaction” (246). I admire this goal and wish that Peterson would seek to implement it himself when describing liberal ideology, feminism, and postmodernity in his book and online lectures because he makes straw men of them all which I find completely unsatisfactory.

Still, after listening well, true conversation may ensue. If listening is not mastered, the conversation becomes a dominance-hierarchy exercise. A particular type of this conversation in which the participants try to attain victory for their point of view will be all too familiar to those who frequent the commenting section of this website and I would dare say those who listen to Peterson’s online lectures, many of which seem quite focused on attaining victory for the rational view Peterson has obtained through a very Cartesian process of thinking things through in his own mind.

Instead, Peterson rightly calls us to mutual exploration in which the participants are allowed to express and organize their thoughts in order to solve a problem or arrive at a better understanding of truth rather than insisting on the a priori validity of their own opinions. “This kind of conversation constitutes active philosophy, the highest form of thought, and the best preparation for proper living” (253).

When engaging in this type of conversation, it is vital to follow Peterson’s tenth rule, “Be Precise in Your Speech” (259). Although, I wonder if a better distillation of this rule would have been, “If You See Something, Say Something,” because he spends the majority of this chapter describing the dangers of ignoring small issues until they become overwhelming or arguing about everything rather than the more manageable issue right in front of you.

He focuses primarily on marital relations and that is certainly a big issue and one that he must be confronted with often in his practice. However, I think his adage that there are very few things in a marriage that are not important enough to fight about applies equally well to broader family, religious, and political communities.

I have succumbed to the temptation myself to ignore the issue, stay silent in the face of oppression, lie to avoid offending, leave rather than stand up for what is right. This is because the conversations around age of the earth, LGBTQ+ equality, church membership, women’s ordination, etc. have all been argued ad nauseum, and generally in wide ranging dysfunctional dominance-hierarchy arguments that do more harm than good. I long to experience the philosophical and focused conversation that Peterson suggests. At its best, Spectrum is one place I have found this to be possible.

Peterson seems to think the only way to transform society is to help one individual at a time learn to be competent in the existing hierarchies. I think we need to transform society, deconstruct hierarchies, and create opportunities in order to make room for all individuals. Perhaps we can build a bridge to meet across this vast divide one issue at a time. One can only hope.

Brenton Reading lives with his wife and three children in Shawnee, Kansas (a suburb of Kansas City), where he practices Pediatric Interventional Radiology.