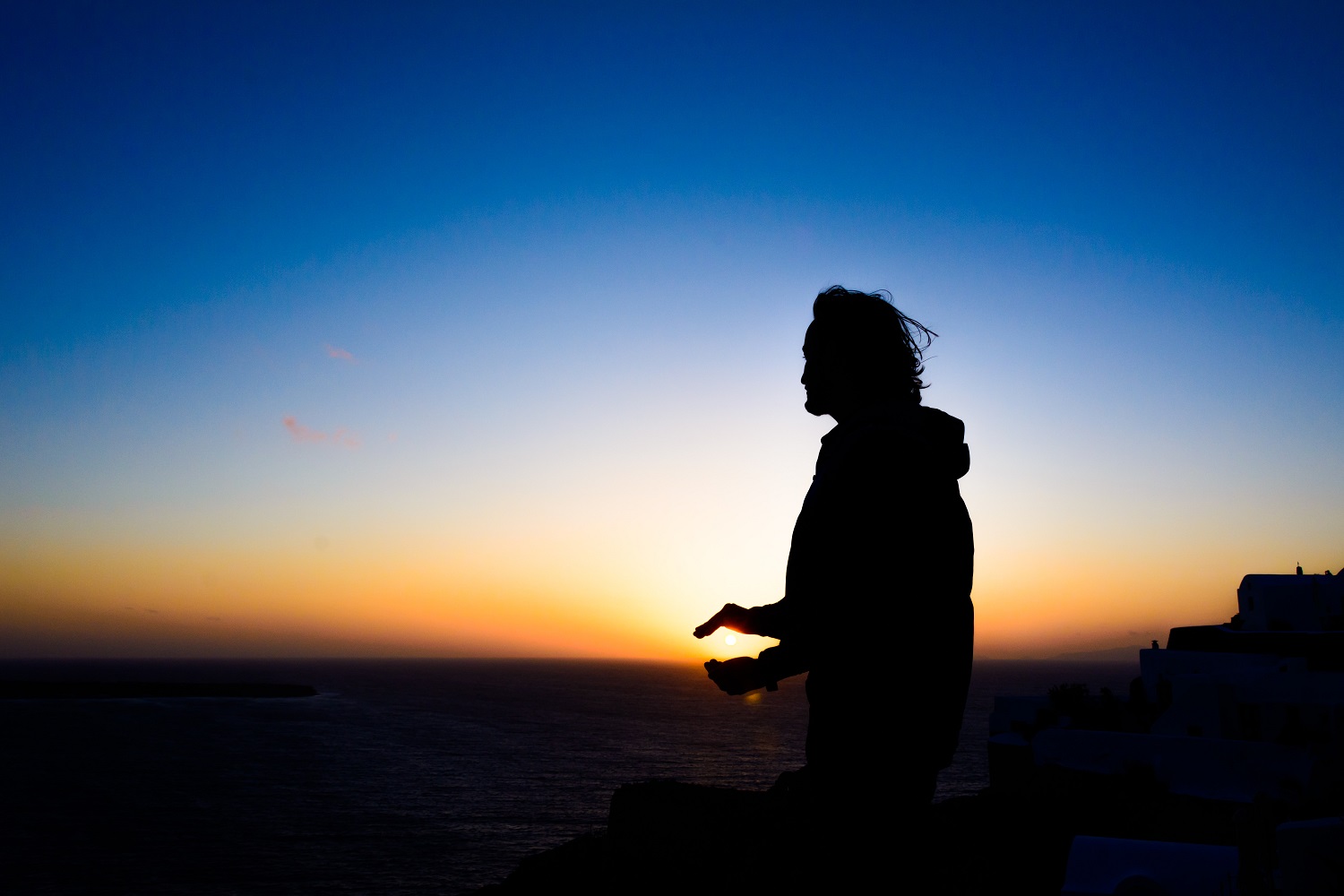 “Jesus crucified is our central image of the strangeness of God, consuming what comes close to it… He is that which interrupts and disturbs and remakes the world. That’s the first thing: the story we tell.”[1]

He stands motionless in a wilderness of heat, the bones of the earth whitening between the razored shadows in the desert. Black birds wheel overhead with the faintest whisper of pinions. There is a silence about him that stops the words behind the teeth. My blood beats in my ears.

Whatever he is searching out, my eyes cannot follow.

Whatever he is seeing is not visible.

There is a gulf between us; I believe he is in combat.

The Gospel of John assures us that “the Word was made flesh and dwelt among us.” There are layers of mystery here that must not be painted over with the wash of complacency. Two thousand years of theological and political cross-referencing have smoothed out the jaggedness of the divine touching the human. We are no longer alarmed by Jesus’ confrontation with evil or how his life sets in stark relief our great need for honesty and spiritual courage. When he fits the order of things — when we confine him to the church where he can preside over committees and validate decisions — he is…harmless.

The story of Jesus sets us at an oblique angle to the plane of the world. It is an Escher print in motion, a Matisse cut-out, with the spare lines of a haiku and the tragic realism of a Rouault painting. I describe the story in this way because I see it in these ways: angles, lines, planes, curves, edges, silhouettes of a lean starkness against the light.

We don’t much like mysteries when it comes to spiritual matters. We call them “paradoxical,” another term that seems to be a dodge, a giving up of the intellect just when it is most consequential. Rowan Williams, one-time Archbishop of Canterbury, sees that our language cannot keep up with the quick-changes of life. We’re using terms that no longer fit the situation, but we haven’t yet come up with something that expresses clearly what we are experiencing. We call it a “paradox,” he says, not because we are trying to muddle things or avoid the truth, but in order to remind ourselves that things are not always what they seem. “We speak in paradoxes because we have to speak in a way that keeps a question alive.” [2]

The death of questions for a person involved in religion is another paradox. It is a relief to those being questioned, but it is in answering those questions that a religious authority believes himself to be an authority. Likewise, for the questioner, the constant twitch of questions can become exhausting and distracting, but it is only by asking and seeking that we find.

My paradox, the one that keeps me spiritually alive and a question to myself, is how Jesus has been for me both a threat and a promise. Like Thomas Merton, who knew himself to be living under “the sign of Jonas” [Jonah], “I find myself traveling toward my destiny in the belly of a paradox.” Jesus took to himself the metaphor of Jonah’s engorgement in the fish to allude to his death and entombment. Merton meant that we are to understand Jesus in the only way possible — through his resurrection.

But my paradox begins with the Incarnation and winds forward to the crucifixion. I have an idea where this comes from and what it might reveal about me. To begin at the beginning has always been my Sisyphean rock to roll. Nothing less than a comprehensive grasp of what may be known on a subject is my default desire. The utter impossibility of this has not lessened my instinctual turn toward it. Thus, my loathing of true/false and multiple-choice questions on exams (Nothing is that certain. Nothing is that cut and dried.), and a febrile sense that I could filibuster my way out of most philosophical cul-de-sacs, meant that as a student I was constantly retracing my steps, like a man on a treadmill — plenty of exercise, little forward progress.

If there is one movement in life of which I am certain, certain because I experience it and see it recapitulated in Nature and in Being, it is the fall from Innocence to Experience and then the rise — hoped for but not inevitable — to Experienced Innocence. Our innocence is birthed with the capacity for experience; experience often arrives in a disruption of innocence, a tearing away from our transient blissful slumber to awaken in harsh light.

Experience jars us in individual but similar ways. It may be the loss of a parent in childhood, or the awareness that others resent us for being an Other, or any number of slips, falls, or crashes. There are surely other ways of coming to knowledge, but the reality east of Eden is that we ate of the fruit and that has made all the difference.

Experience arises within a tragic context — we cannot choose the particulars, but it is necessary that we choose — yet, it is usually through experiencing a fall that we recognize our need. Broken and stunned, we are fortunate if someone cares enough to say that it matters how we respond to our brokenness. The passive receptiveness of our innocence gives over to our active seeking for a way to rise to our Experienced Innocence, what Christians call “new life.”

Our experience continues: any learning is a kind of fall from innocence and a rising. To find a new innocence in this way “is to retain that space in your heart that once heard a still, small voice saying not your name so much as your nature… You must protect this space so that it can protect you.”[3]

What strikes us as strange is that which comes from beyond our experience — our physical, emotional, imaginative limits. The word derives from estrangier, Old French, and before that from Latin extraneus, that which is external to us, which comes to us from the outside. Literally speaking then, everything we experience for the first time is strange and we will be a stranger wherever we are that is not part of our interior geography. Everyone is a stranger in more places than they can call “home.” We are all “the stranger” within someone else’s gates.

The Incarnation cradles the paradox of the divine becoming human and the human glorified in the divine. The mystery and the strangeness of Jesus is that he speaks and acts for God through his humanity, not in spite of it. The apokalypsis is the revelation that God is in our midst in the heat, sweat, hunger, joy, weariness, delight, and humor of Jesus. The Incarnation puts flesh on the shimmering hologram of the Word; the abstract infinity of the Word is rendered visible as an itinerant rabbi who speaks with authority because he knows God as God knows him — so much so that he can truthfully say, “I and the Father are one.”

“He came to his own,” says John, “and his own received him not.” He came home and was a stranger to those who dwelt within. He came and was not recognized as God because he is through and through one of us. But adding to the mystery is the manner of his coming. We humans project our images of mastery and power up into the heavens and call them “God.” We see God as a superhero, flashing his omnipotence in a slashing, blinding intrusion into this chaotic world. But God cannot be anything but what his nature is, and his nature is nothing if not that of self-giving love. “What he does is identical with what he is.”[4]

To appear in the world quietly, in humility, in the form of a servant, is the most God-like form we could imagine — and it does take imagination. Infant, child, teenager, man — these are the iterations of God-in-Christ, beginning from the moment he is enfleshed, incarnated among us.

The arc of his life, from incarnation to crucifixion, appears in all its strangeness as a series of reversals: a servant, not a superhero; humility rather than arrogance; the Word instead of the sword; death on a cross instead of victory over the vanquished.

For two thousand years the church has more often than not chosen the warrior over the servant. More than that, it has refused to accept the implications of the words, “He who has seen me has seen the Father,” a claim not about Jesus, but “a declaration made about God.”[5] The strangeness of a God whose character persuades rather than coerces, whose glory is revealed in mercy and forgiveness rather than cruelty and arbitrariness confronts our fears. The way to God is narrow because we travel it in and through Jesus who, in God’s name, throws open the gates of the kingdom to those we fear and despise — the strangers and aliens who gladly exchange their pride for love and mercy. We must choose to enlarge our lives.

Like Rilke, I have questions, the answers to which I must live into. Shall I — shall any of us — one day arrive like Jonah, strangers tossed up on the shores of a great city to wreak judgment on other strangers, only to find that God-in-Christ, ever constant in his love, has showered grace instead of fire on those whose hearts of stone are broken?