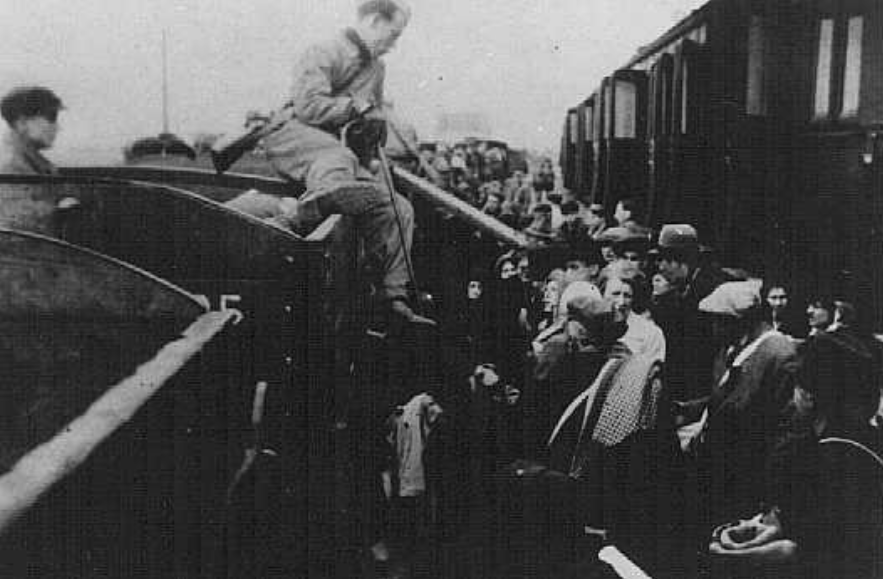 It has been some weeks since I submitted a reflection to the Spectrum website under the title, “The 144,000 and the 233,000.” The 144,000 is a number from the Book of Revelation. The 233,000 was the number of Jews living in the city of Lodz before World War II. Most of them were liquidated at Chelmno, a small village fifty miles to the northeast of Lodz that was turned into a killing site. I said in my submission that I hoped to be at Chelmno on April 11 this year. I also offered to put flowers on the graves of the 233,000 on behalf — as it were — of “the 144,000.”

A few readers asked me to include them in this gesture of remembrance. I wish to tell them and others who followed the Revelation comments that I have done what I intended. I came to Chelmno on April 11, as planned. I saw the killing site. I walked around in the woods at the site of the mass graves about five kilometers away. It is a quiet, wooded area, but the outlines of the mass graves have been preserved. Some 170,000 victims, mostly Jews, were buried here. Then, worrying about the verdict of history, the Nazis reopened the mass graves and had the victims cremated in pyres of bodies until the last trace was gone. The earth refused to be an accomplice to the crime; it strove to leave its wounds open. The scars from the mass graves can still be seen, and I am relieved that I finally got to see them.

It was not easy to find fresh flowers. On our way from Lodz to Chelmno, the taxi driver and I saw several flower stores, but they only had artificial flowers. After a search, we found a “real” florist, and I bought twenty big roses. I placed ten at the memorial stone at the killing site and five roses each at two places in the woods. In my submission, I had promised to read Revelation 7:4-8 in the woods at Chelmno, the first extermination camp on my itinerary. I did not read the text there. I waited until Auschwitz, the sixth and last extermination camp on my trip. I found a reasonably quiet spot near the arrival ramp, and there I read it. 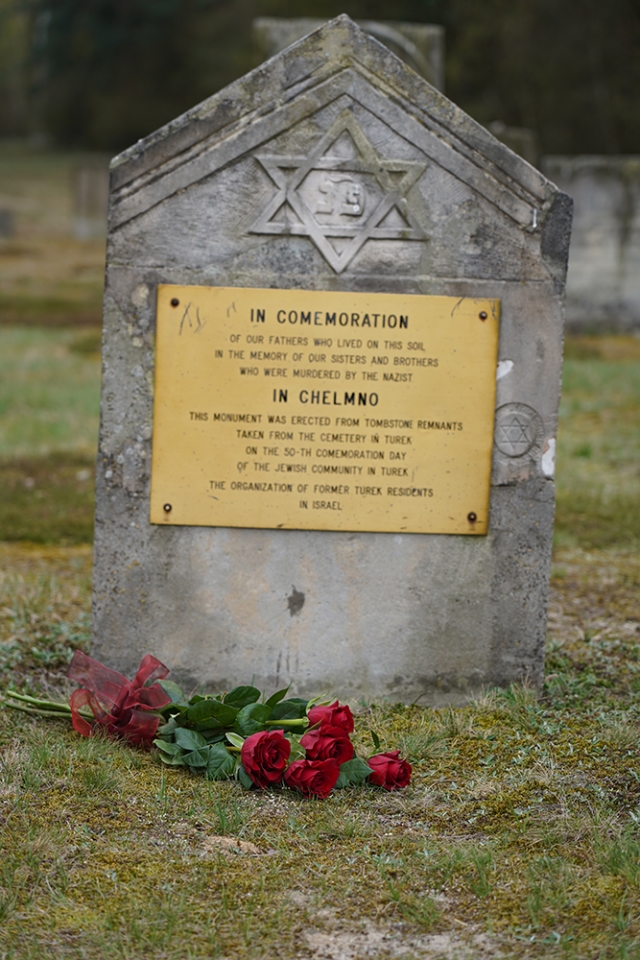 Roses on the memorial at Chelmno, April 11, 2019. Photo courtesy of the author.

I started my trip on April 7 in Amsterdam. On April 8, I went to Westerbork, the transit camp for the Dutch Jews. About 105,000 Dutch Jews were sent from Holland to Sobibor or Auschwitz in Poland in the course of two years. The trains always left on a Tuesday, holding 2,000 to 3,000 Jews. It took three days and three nights of continuous travel to reach the destinations. I also wanted to travel on a Tuesday, and I did.

My trip can be envisioned as a triangle. The first corner of the triangle is Westerbork in Holland. The next corner is Auschwitz in Poland. The third corner is Turin, Italy. I’ll explain why in a minute.

I did the entire trip by train. It took me three weeks. My first stop was Berlin. Although I saw things there, including the Holocaust Memorial on Hannah Arendt Street in the heart of the city, I was mostly passing through. Then I continued into Poland, with Lodz as my first stop. As noted above, I met my appointment with the extermination camp at Chelmno on April 11. I also saw the remains of the enormous Jewish ghetto in Lodz. It was second in size only to the ghetto in Warsaw, but the Warsaw ghetto was largely wiped out during the war.

After Lodz, I continued to Warsaw. From Warsaw, I took the train northeast to Malkinia. The train tracks between Malkinia and Treblinka have been removed, but one can still see the path. A taxi took me the four kilometers between Malkinia and Treblinka. I did not want the driver to wait for me — he would come back to pick me up after three hours. This gave me time to walk the perimeters of the grounds where at least 800,000 Jews were murdered in the short span of less than a year. It is a quiet place with few visitors. As at Chelmno, I felt that the earth is guarding the memory.

My third city-stop in Poland was Lublin, even further east. Lublin was the seat of “the General Government” during the German occupation. Within this territory, the German occupier built extermination camps at Sobibor and Belzec as well as the combined concentration and extermination camp at Majdanek. The number of victims at Sobibor is estimated to 250,000; at Belzec, 600,000; at Majdanek, 80,000. Treblinka, Sobibor, and Belzec are small places; they were built only for the purpose of killing. Majdanek is huge, and it is well preserved. It lies within the city limits of Lublin: there is a bus stop for Majdanek.

When the Red Army moved west, it came to Lublin sooner than expected. It is said that the first reports struck Western news media as propaganda. They could not believe what they were told. What made the deepest impression on me, perhaps, happened at Sobibor. (The drive from Lublin to Sobibor and then to Belzec took the whole day, about 200 miles in all.) At Sobibor, there is a narrow tree-lined alley leading into the killing grounds from the train ramp. Along this path, small round rocks have been put on the ground on both sides. On the rocks are inscribed the names of victims — families, women, children. Many of the names are Dutch, recalling that 33,000 of the Dutch Jews met their end at Sobibor. The ages of the victims are also noted, one child less than a year old. Most of the victims were killed on the day of arrival. I say no more.

Next, I went by train to Cracow via Warsaw. Most of the Cracow Jews perished at Belzec. I continued the following morning to Oswiecim (Auschwitz), just a little more than an hour by train. I spent most of the day in “Auschwitz II,” better known as Birkenau. I won’t go into detail. At all the other places, I saw very few visitors. In fact, I was virtually alone at my visits to Chelmno, Treblinka, and Sobibor. At Auschwitz and Birkenau, there are thousands of visitors every day, and especially many young people from Israel. I overnighted in Oswiecim, giving me a chance to run on foot one last time, first to Auschwitz I, then another two kilometers to Auschwitz II. This made it possible to “feel” the space and to see the rivers that pass through the area, one of them the Vistula.

I will summarize the rest of my trip briefly. I traveled by train south from Auschwitz into Slovakia and on to Vienna. Serena joined me in Vienna. We went together from there to Munich, the next day through part of Austria into Italy, with Turin as our destination. In Turin, we saw the building where Primo Levi lived after his liberation from Auschwitz. We went on the next day to Basel, and then to Nuremberg. That was as far as Serena could go. My three stops in Germany were Nuremberg, Dresden, and Marburg, in that order. I choose Nuremberg because it witnessed the most religious expression of the Nazi movement and later hosted the Nuremberg Process; Dresden, because I treasure the diaries of Victor Klemperer (I Shall Bear Witness), and Marburg because it has the Philipps University, the oldest Protestant university in the world. I wanted to measure the distance between the Philipps University and the Jewish synagogue that was burned and demolished on November 9, 1938. It is not far, a mere one hundred meters. No one living in Marburg at the time could fail to notice the night when the Jews were served notice that they no longer had the protection of law — or the protection of compassion.

I wrote most of this as my train approached Amsterdam. I chose Amsterdam as my anchoring point because of Etty Hillesum and her stunning diaries. She was sent to Auschwitz on September 7, 1943 and died there on November 30 that year.

Some have wondered why it was so important to me to make this trip. The answer to that is deeper than words, but let me offer justification in the words of the Holocaust exhibit now on display in New York, “Not Long Ago. Not Far Away.” That’s what it is: Not Long Ago. Not Far Away. Knowledge of Etty Hillesum’s diaries is recent. Otto Dov Kulka’s Auschwitz memory, Landscapes of the Metropolis of Death, was published in 2014. Edith Eger’s recollection, The Choice, was published in 2018.

I have traveled by train in regions darkened by history’s most atrocious deeds. Although I might have seemed to be alone most of the time, I had the company of Etty, Otto, Elie, Simon, Victor, and Primo — and many others who came this way against their will “Not Long Ago.” Reading their observations and thoughts on site helped me realize more deeply than before that I do not regard them mostly as victims. They have become my mentors, my most treasured mentors.

I am working to put into words something from my nine destinations, for now under the working title, God in the Age of the Trains. It may take a while.

I arrived back in Amsterdam to striking pilots in SAS and no return flight. Three weeks after setting out from Amsterdam, Richtung Auschwitz, I was on the train going east again, as though beginning the same trip over. Once inside Germany, I changed to a train going north to Hamburg for the last seat on a flight back home. I may not ever do the full trip again by train, but I am already doing it in my mind, again and again.

Main image: Jews from the Lodz ghetto are forced to transfer to a narrow-gauge railroad at Kolo during deportation to the Chelmno killing center. Kolo, Poland, probably 1942. Photo courtesy of the United States Holocaust Memorial Museum.