On The Receiving End 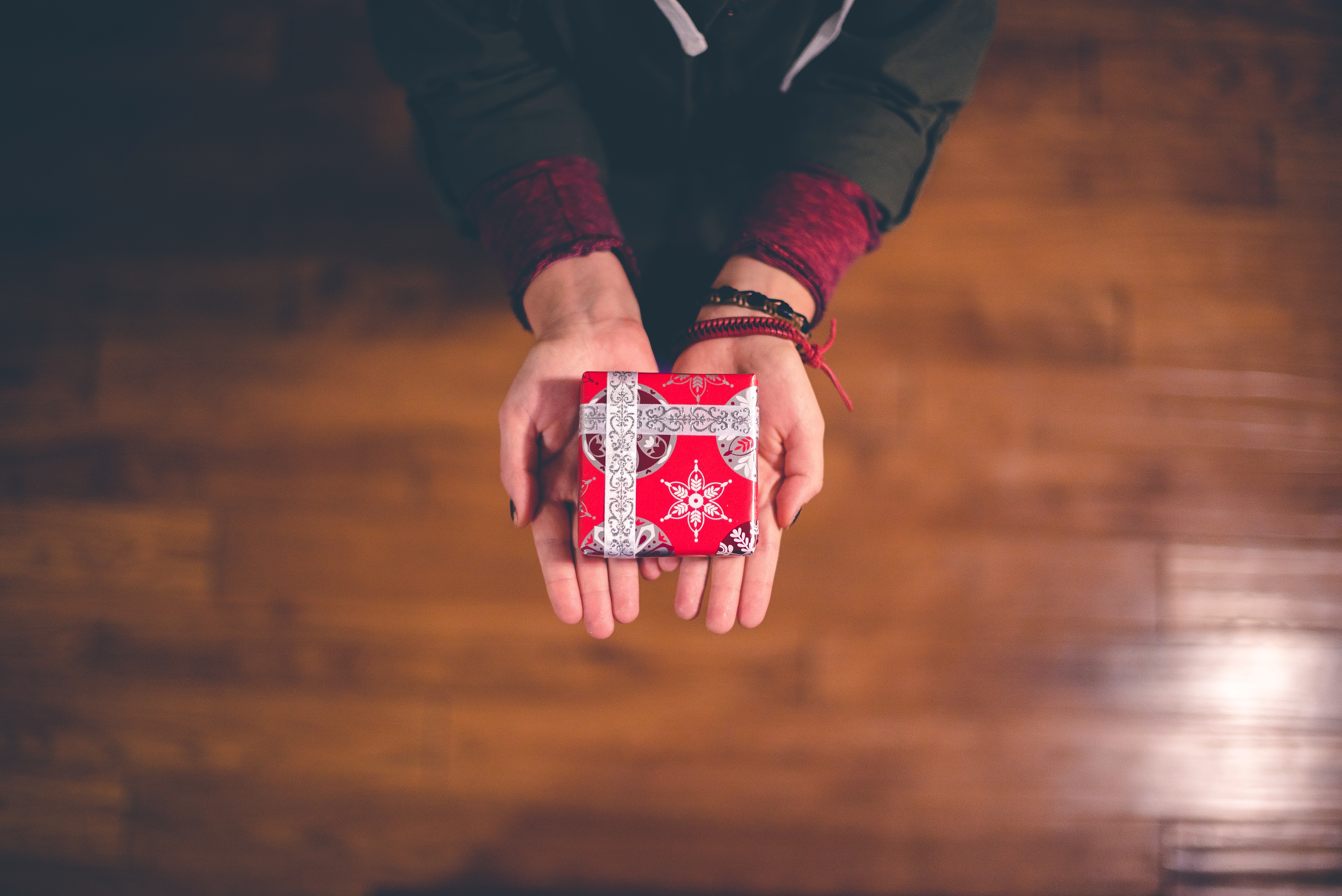 "The Christmas story—the one according to Luke not Dickens—is not about how blessed it is to be givers but about how essential it is to see ourselves as receivers."[1]

At Christmas time we give gifts. Parents teach their little children how to do it by buying gifts the child can give to teachers and friends. We learn to give by giving.

Like many other social conventions, it’s something acquired by practice; there are rules. We try to match our gifts to the personalities of those receiving them. Often, this is done through stereotyping: tools for men, clothing for women. Then there are “gag gifts,” those useless gadgets we buy for others mostly for laughs, just to see their expression when they open the box. And there are those gifts that bear a subtle message of reform and uprightness: a dictionary for the teen who games every free minute, and a tie and matching handkerchief for the man who refuses to wear one.

Perhaps most importantly, we learn the art of proportionate giving, of responding to a gift in like manner. Don’t exceed the received value, lest you be thought ostentatious or overeager, and for heaven’s sake, do not under-give or you’ll be branded a cheapskate. All of this in order to maintain a delicate balance between the expectations of social norms and one’s self-image.

“It is better to give than to receive.” The words are those of the apostle Paul, spoken to the believers at Ephesus. He is “remembering the words of the Lord Jesus, for he himself said, ‘It is more blessed to give than to receive.’”[2] It may have been a common saying among the disciples and those who followed Jesus, or it may have been revealed to Paul himself, for nowhere in the Gospels is this saying found. Paul wouldn’t have known that though, since Mark, the first Gospel, would not be written for at least another twenty years and the other Gospels much later. But as John says, “There are also many other things Jesus did; if every one of them were written down, I suppose that the world itself could not contain the books that would be written.”[3]

We say this phrase jokingly when we are trying to persuade someone to donate to our cause, or we might repeat it when we feel ourselves to be reluctant givers. And while it truly may be more blessed to give than to receive, the fact is that we find it harder, much harder, to be on the receiving end.

To give is to affirm that we are in control. It suggests that we are capable and intentional, that we have worked hard for what we’ve got. Depending on our background and attitude, we may briefly enjoy the sweet emotion of smugness: “I’m always happy to lend a helping hand to the poor.” It reinforces our desire to do good and it reassures us that we can sympathize with the unfortunate. Somewhere, deep in our amygdala, is a primitive fear of judgment; to lay up treasure in heaven we peer out at our porches to be sure no indigents named Lazarus are dying there.

If, through life experience, wisdom, and humility, we are able to sidestep or derail these temptations, we may realize with a growing appreciation how indebted we are to so many for so much.

I can distinctly remember as a pre-teen, throwing myself in a chair in my room and looking around with a rising desperation as I saw that every object in the room had been provided for me. I had been taken in by my grandparents at the age of three—just when they were approaching retirement—and their unstinting generosity and care had provided for my every need. They had sacrificed so that I could have a home and an education. But what I felt in that moment was not gratitude but the weight of a debt that I could never repay. This was exacerbated by my grandmother’s tendency to remind me at times how much they had sacrificed to provide for me. Guilt, shame, indebtedness—how one’s perception can turn a gift into a gilded chain!

“It’s tough to be on the receiving end of love, God’s or anybody else’s. It requires that we see our lives not as our possessions, but as gifts.”[4]

In a consumer culture such as ours there aren't many ways we learn to accept gifts graciously. Even more so, our bedrock convictions about private ownership, and the elevated sense that we have a God-given right to everything we’ve worked for, creates an inevitable conflict within ourselves when faced with the needs of others. In ways that we deeply feel, but may not be able to articulate, we are owned by our possessions.

Lewis Hyde’s book, The Gift: Creativity and the Artist in the Modern World, is a treatise on what compels artists to give of themselves and their talents, even without recognition or recompense. Hyde draws out the implications that anthropologists have found of “gift economies,” which are marked by “three related obligations: the obligation to give, the obligation to accept, and the obligation to reciprocate.”[5]

These are cultures in which the gift exchange colors every facet of life, a “total social phenomenon . . . At once economic, juridical, moral, aesthetic, religious, and mythological.”[6] Historically, the slur “Indian giver” arose when the privatized and capitalistic system of the whites came up against the gift economy of the native tribes in America: “The Indian giver (or the original one, at any rate) understood a cardinal property of the gift: whatever we have been given is supposed to be given away again, not kept . . . The only essential is this: the gift must always move.”[7]

The tribal cultures made a distinction between gifts and capital such that “one man’s gift must not be another man’s capital.”[8] Gifts are to be taken in and consumed, not hoarded for investment and private gain. Use them up, be nourished by them, and then pass along a similar gift.

Gifts are often at the heart of ancient stories and mythologies. There is a common motif of three brothers (or sisters) who receive gifts to aid them in their quests, only to be confronted by an ugly, misshapen creature asking to share in the gift. Invariably, the two older brothers rudely refuse to share and so are trapped or lost in their quests. It is left to the youngest of the trio to set out on his quest with the gift, to meet the creature, and to freely share—whereupon, the creature gives him another gift in the form of a key, a magic word, a weapon, or a song that will complete the quest against formidable obstacles. The humility of the youngest (and least promising) son in sharing, taking, and reciprocating the gift-giving results in wholeness. And often the youngest redeems and saves his narcissistic older brothers.

Hyde recalls that setting free one’s gifts and realizing one’s potential was a recognized labor in the ancient world: “The Romans called a person’s tutelar spirit his genius. In Greece it was called a daemon.”[9] To develop one’s talents was an honorable quest for it would be the occasion of recognizing one’s indebtedness and accomplishing good with it. “An abiding sense of gratitude,” says Hyde, “moves a person to labor in the service of his daemon. The opposite is properly called narcissism. The narcissist feels his gifts come from himself. He works to display himself, not to suffer change.”[10]

Hyde at one time worked as a counselor for the AA program and he draws on that experience to illustrate the parallels to a spiritual life. “Spiritual conversions have the same structure as the AA experience: the Word is received, the soul suffers a change (or is released, or born again), and the convert feels moved to testify, to give the Word away again.” He speaks of the “labor of gratitude” as that which we undertake “to effect the transformation after a gift has been received.”[11]

When the gift works to change us, we must stay in the changing until we are filled—and then we may empty ourselves in giving to others what we have gained and learned. No worries; we’ll be given it back a hundred-fold.

In spiritual terms, in the language of the New Testament, this is kenosis, the pouring out of Christ that fills us with his gift of life. When we receive this with gratitude and humility, we are given the power to give life to others. When, in gratitude, we return to God what Jesus has given to us, we are united with God. “I and the Father are one,” said Jesus, because he was giving back to God what God had given to him—his life and love.

Give, receive, reciprocate; it’s an age-old story. Instead of taking, we learn to receive. Unless we receive, we’ll have nothing to give. The Advent is the dramatic comedy in which the weakest wins; the stone the builders rejected becomes the cornerstone. He who is among us as one who serves, becomes the Water of Life. We ask for a king and we are given . . . a baby.