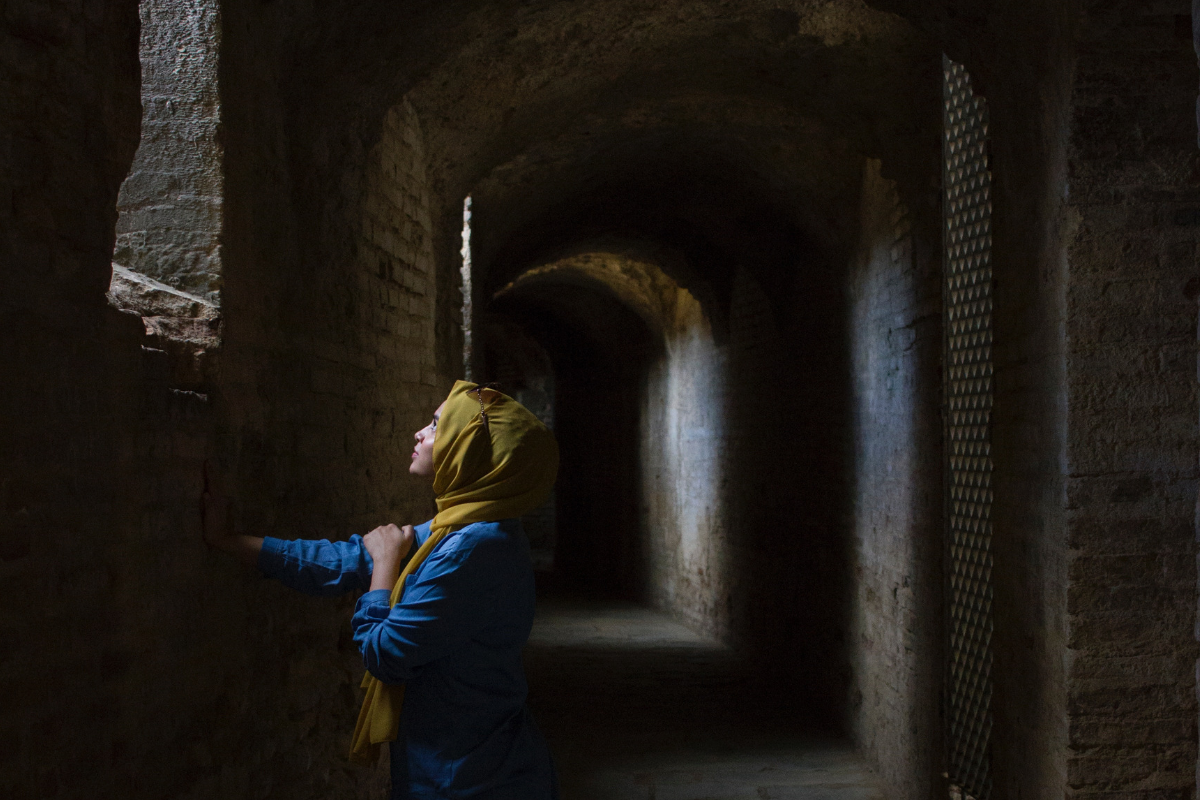 “No! No! No!” I screamed, instantly awake. A cruel, evil presence moved to possess me, discharging dense darkness. I flayed and thrashed my fists and feet like clubs and rods, desperately trying to ward off my unseen assailant. I sprang up, flinging the thin blanket completely aside, and glared several feet above my head.

“I’ll…never let…any of you…use me — again!” I said, emphasizing each phrase with kicks and punches. “Never!”

My little bedroom floor quaked violently, and a jar crashed to it as though hurled by a gigantic hand. I fell backwards toward the bed, but found myself on the floor. Suspended in the very air before me was the bed, convulsing back and forth!

“Magdalene, we’ll never leave you!” a raspy voice announced, coming closer. About six others joined it, surrounding me. “You are ours…no matter what that Imposter says!”

“Je—” I tried, and immediately hands squelched my throat.

“—sus!” Instantly, the fingers released their grip. “Help me, Lord!” The floor stopped heaving, and my bed fell to the floor. Pounding feet fought for the door and window, and the unearthly darkness lifted.

Everything became as peaceful as when I had prayed before bedtime! “Thank You, God,” I wept. “I meant what I told Jesus. I’ll never stop serving You. I’m done with Satan forever!” But I didn’t fall asleep right away.

Looking at the full moon outside my window, I marveled at my fresh encounter with the demons. There was a time when I had welcomed their approach. A time when I wanted nothing to do with God. How had it all happened to me, a Jewish girl who practically had grown up in synagogue? After all, my parents had morning and evening prayers daily with Martha, Lazarus, and me.

It all started with Simon, I sighed, remembering events with him as though they had freshly happened. All of the girls in Bethany adored him. His dark, curly hair was so thick and shiny that it made us think of Absalom. He was strong, as his victorious wrestling bouts with the other boys showed. Also, coming from a well-to-do family meant he would be a good provider for his future family.

I liked — no, I loved Simon! — for all these reasons and more.

Although people said I was stunningly beautiful and shapely, I was an outsider, wary of others. I suspected that they saw me only in terms of my beauty, missing the soul that hungered for God and righteousness. To the boys, I was merely a body — a pretty one, yes, but one that lacked a mind. Most girls snubbed me, mistaking my caution for standoffishness and arrogance. But Simon seemed to see beyond my wall.

“I’ll never hurt you, Mary,” he had promised me when he first proffered friendship. At first, I disbelieved him, fearing he was just another man plotting to use me. But his persistence in the face of my silence and avoidance intrigued me. His gentleness and thoughtfulness both softened and captivated me, until his ready laughter and quick mind made me see this Pharisee-to-be in another light.

Before long, I was head over heels in love with him, and we were inseparable!

Perhaps that inseparability caused our problem. One thing led to another…and I was with child. I was terrified, never dreaming such a thing could happen to me. I had disgraced my family! The girls would gloat over me, saying that I had gotten what I deserved. I could even be stoned!

I turned to Simon in my distress. His face grew as pale as Mount Hermon’s snows. Shocked into silence, he looked over my head into another world.

“What are we going to do?” I pleaded, trying to break the oppressive silence.

Time stood still. The sun stopped shining. All life had ended. Surely that was the case! Or I must be dreaming. Surely my Simon did not say what I just heard!

I tried speaking, but the words died in my brain’s confusion.

“Mary,” he continued, looking squarely at me, “are you sure I am the one?”

“What do you mean, Simon Barjonah!” I stuttered, stung to speech by his implication. “I have never even laid eyes on anyone else.” He backed away as I pressed closer to him.

“Mary, I want to believe you….But the village girls have been telling me things….The boys, too….Even the men!”

“I just don’t know whom to believe….Let’s just wait until the baby is born…. Perhaps I’ll do something then.”

Perhaps I’ll do something then. Perhaps…Then…do…I’ll…Something….Then....

The words echoed endlessly in my brain, swirling in confusion until a merciful darkness wooed me from their pain. I don’t remember what happened afterwards, but when I looked up, I was in Magdala, not Bethany.

Our baby, a boy with Simon’s curly hair and piercing eyes, died at birth. Now, I had lost two men. To one, I had tried to give my heart; to the other, I couldn’t even give life! Perhaps in a desperate attempt to ease my pain and to replace Simon, I flitted from man to man. Instead, I found mounting pain as, after each desperate encounter, one physically satiated man after another abandoned me to my fate.

I tried stopping, but again and again, I messed up.

In despair, I turned to a wizard who claimed to have just the cure for me. That “cure” descended into what became possession by seven demons, along with deeper sexual addiction! Degraded and outwardly callous to any form of purity, I was still a very hurt young woman. In my heart, there flickered the desire to be the old Mary….Even Simon’s.

That’s when I met the Carpenter, but, really, He met me.

One night, I worked the shadows of Magdala’s trendiest nightspot, an area that soldiers haunted, wanting a good time. Expectantly, I spotted a tallish man striding toward me. He was broad-shouldered, but wore the clothing of a Jewish peasant.

Just what I need, I thought, another poor boy!

“What do you want?” I snapped. Time was fleeting, and if I didn’t ditch this guy soon, the other girls would get the best soldiers.

He smiled, and his entire form seemed to radiate something heavenly. Divine, even. I felt unclean and stepped back. His kindly gaze was not the leery one that I worked so hard to elicit from my clients. It penetrated my soul, making me conscious of my every sin.

Struggling to cover my torso, I took another step back, yet I hesitantly took several forward. Somehow, the Man seemed to want me. But not to trash me like an orange peel after its contents have been devoured.

“I’ve come to take you home,” He said ignoring my question. “Home to where you long to be. Where you were before Simon…where God created you to be...where you’ll never roam…never know the sadness killing you....Home, Mary….Home!”

I reached to accept His offer, but seven pairs of hands gripped me back and flung me to the ground. I tried to mouth “Yes!” Instead, I erupted with curses that mounted in volume and frequency.

“Who are You to take her away from us!”

“She loves working for us!”

“We have made her into what she is!”

“Liberated from Your accursed Law!”

“Go back to where You belong — or we’ll crucify You now!”

I felt His hands gently touch my head.

“Come out of her,” He commanded in a voice that convulsed the ground. “Leave with all your works of depression, revenge, and lust. Be off with your confusion, deception, self-hatred, and rebellion!”

And they did just as Jesus said!

Since that moment two months ago, I have felt clearheaded, fulfilled, pure — as though I were just born! Jesus’ friend Peter explains that it really happened, only in spiritual terms. I don’t yet understand much of what he and Jesus’ other followers say, but this I do know: He rescued me from the living hell of demonic possession and sexual addiction, and I’ll serve Him forever!

Before I go back to sleep, I’ll pick up the broken jar. It reminds me of what I plan to do for my new Master. I’ll get a new jar. And after I’ve earned enough money from my new job, I’ll fill it with my best gift! Spikenard perfume. I’ll pour it all over Him. From head to foot! Showing my love and gratitude for what He has done and will do for Marys like me…and future Marys.

Dr. Bowe is a graduate of English from Oakwood College, Andrews University, and the University of Kentucky. He has taught at Oakwood for the past thirty-one years, the same period that he and his college sweetheart, Norma Joy Williams-Bowe, have been married. Their union has produced two adult children and two grandchildren, the joy and inspiration of their lives.

Photo by Ifrah Akhter on Unsplash