The Life of a Living Sacrifice 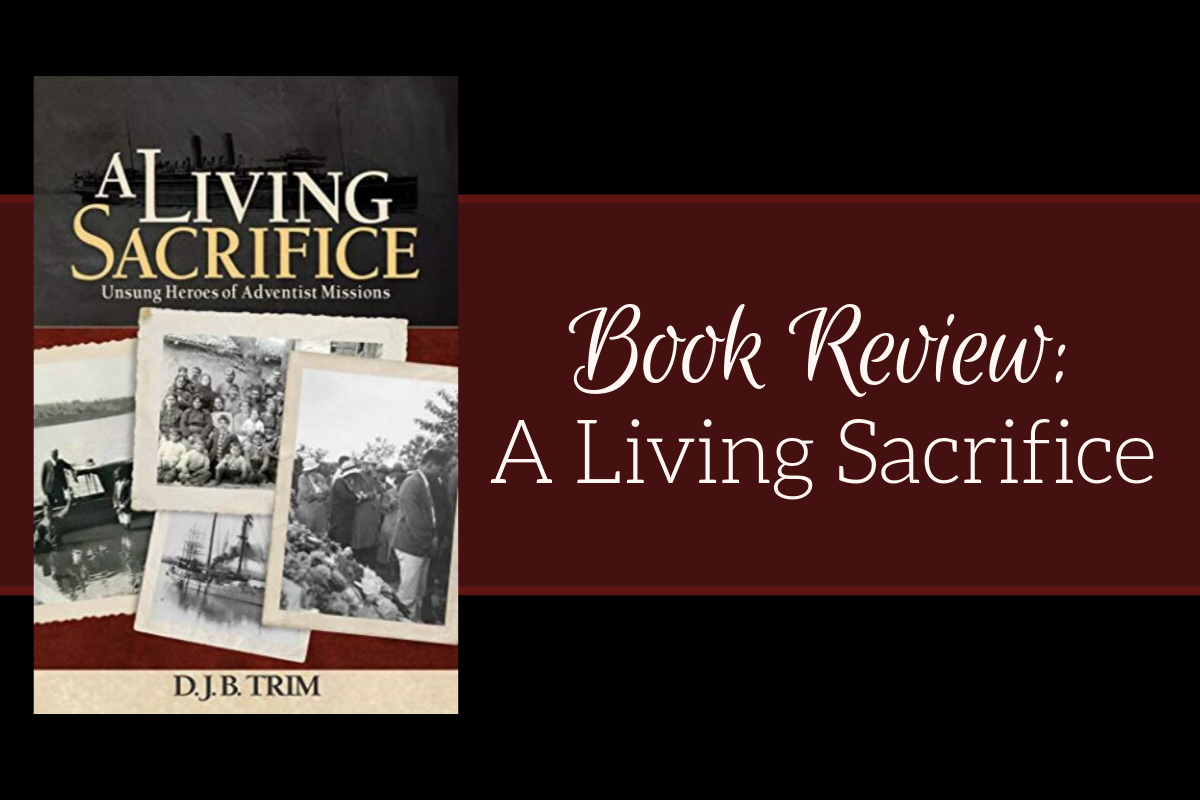 Westerners who go to faraway countries as Adventist missionaries have faced numerous, unimaginable trials. In David Trim’s short book, A Living Sacrifice, he shares the stories of many little-known missionaries who made great sacrifices for the Gospel. The next few paragraphs consider this book, analyzing it for its practical use and meaning. Truly, all who choose to enter a foreign land to share the Gospel make great sacrifices, but they do it for greater rewards.

The book begins by telling the brief story of Eva May Clements who died on November 3, 1920, in Burma, now Myanmar. Little is known about her life. She was born in Australia in 1897, and in March 1920, she began work as a stenographer for the Southern Asian Division of Seventh-day Adventists in India. Normally the church would not hire someone from out of the country for this position, but there might not have been an English-speaking believer in India at that time. In August 1920 she visited Burma. She fell ill soon after, but seemed to be feeling better in October. She worked copying budgets and planning programs for meetings. By the end of the month, symptoms were returning, and her appendix was removed. Even with the medical care, she soon slipped into a coma and died on November 3, 1920 (15-17).

During the next 125 pages, the book tells stories of many other missionaries, most of whom died of non-persecution-related causes, such as illness, and long before these people were able to accomplish a lot of what we would call “success.” In fact, a study is noted that concludes that the average term for the first 214 missionaries to China in the nineteenth century was seven years. This is partly because one out of five such people died during the first seven years. One reason for the high death rate of missionaries all around the world is that treatments for diseases like Malaria weren’t available. Most Western missionaries to Africa would die of such diseases in the first two years of service (25, 26).

After World War II, more modern medical practices reduced the death rate, but people still continue to die of various causes in the mission field. Trim notes how these people had to have been motivated by nothing less than pure passion for the Gospel and the saving of souls (133, 134).

This book is an excellent resource for understanding what missionaries have had to suffer. There are detailed endnotes after each chapter so one can research further. This book reads almost like one of those war stories where wave after wave of troops enter enemy territory, only to be cut down, and then proceeded by wave after wave of more troops, until, finally, the outpost is captured. One must marvel at the dedication and determination of these faithful missionaries who sacrificed so much. What is unique about this book is its focus on non-persecution-related means of death. It is quite eye-opening to learn of how strong a factor disease was, for example. However these people died, their suffering couldn’t possibly be compensated by any amount of pay. These people served God for the reward of making a difference for the Kingdom, and the pay simply gave them the resources for food and supplies.

A number of ideas come to mind when reflecting on this book. Firstly, it is important that these stories are told, simply for the purpose of having them told. These missionaries suffered greatly, and their suffering should be honored, just as soldiers killed in battle are honored today all around the world. These stories can inspire others to give all for God and can cause everyone to question priorities and values.

This book also helps one in a free country, like the United States of America, to put what we call “suffering,” into perspective. Many hear stories in church about someone who faces ridicule because of wanting to have Sabbaths off. In some countries people are tortured and subjected to years of brainwashing and re-education because of such convictions. Missionaries that go to these other countries face trials much more severe than a “flame” on Facebook, whether those trials involve direct persecution or more natural factors such as disease. People who complain about how difficult it is to resist a temptation ought to remember how difficult Jesus’ followers have it elsewhere.

As a result, this book should be highly recommended to anybody interested in Adventist history and being challenged to follow Christ more closely. Are those living in free societies with good health care as willing to sacrifice all for the Gospel as those who go overseas? The answer to this question should cause the readers of this book to engage in much, deep soul searching. In the end, may all be ready to hear Jesus say, “Well done, thou good and faithful servant” (Matthew 25:21).

Dr. Ray McAllister is passionate about enjoying all he can out of life. He enjoys writing poetry, reading, origami, computer programming, coding computer graphics, and serving others. In August 2010 he received a PhD in Hebrew Scriptures. Dr. McAllister is totally blind, so he's the first blind PhD from Andrews University's seminary, and the first totally blind person in the world to get a PhD in Hebrew Scriptures. He teaches distance education religion classes for Andrews University and works as a licensed massage therapist in Michigan. In December 2014, he became the first totally blind, male, certified birth doula, trained to assist a woman during childbirth. In July 2016, Dr. McAllister and two other visually impaired biblical scholars received from the National Federation of the Blind the top prize Jacob Bolotin Award for their work making biblical language materials accessible to the blind. Dr. McAllister sees his blindness as an opportunity to more deeply see the beauty of God's love and guide others to do the same.