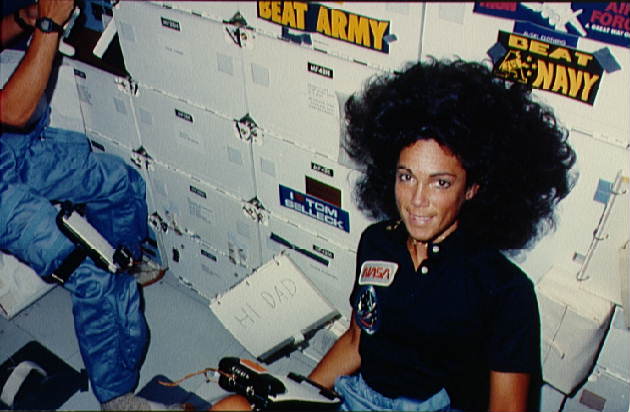 Recently I was at the Armstrong Air and Space Museum in Wapakoneta, Ohio. As I was viewing the exhibits, I saw this statement on display:

“Astronauts don’t have to be either very feminine or very masculine women, or very superhuman males, or any color or anything. It’s about people in space.”

This was said by Dr. Judith Arlene Resnik, astronaut, pilot, biomedical and electrical engineer. She was born on April 5, 1949 to Marvin and Sarah, very devout Jewish immigrants from the Ukraine.

Knowing the history of the 1950s and 60s in this country, Judith did not allow her gender and ethnicity to impede her dreams and goals. She loved classical piano and wanted to pursue this love.

In school she excelled in mathematics, which was rare for a girl in that time period because of societal stereotypes about boys and girls. In addition, her father had mastered eight languages which he helped to foster in his very bright daughter.

At Firestone High School in Akron, Ohio, Judith received a perfect SAT score of 800 in Mathematics, which few female high school students nationwide had achieved in the 1960s. The Julliard School of New York City had accepted her to study classical piano. At 17 she made the decision to pursue mathematics at Carnegie Mellon University in Pittsburgh, Pennsylvania. On campus she found that she and the other female students were a rarity, but this rarity motivated her to continue her pursuit of knowledge without regard to the unsavory comments of some of her male classmates.

She graduated with a BS in Electrical Engineering in 1970. In 1977 she earned her doctorate in electrical engineering from the University of Maryland.

However, before these American women were recruited, there were the Mercury 13, the women of the 1960s, who never made it into space because they were never viewed as official candidates by NASA, even though they underwent the same testing rigors as the male candidates. In this country, in the 50s and 60s, except for fictional stories, films and television, women in space were not politically expedient. The Soviet Union was more inclusive of women in their space program.

Judith’s first space flight as a mission specialist was the maiden voyage in 1984 of the Space Shuttle Discovery. For her next mission in 1986, she was to be the flight engineer and backup pilot, but tragically, on January 28, 1986, she and her fellow Space Shuttle Challenger crewmates Michael Smith, Dick Scobee, Ronald McNair, Ellison Onizuka, Gregory Jarvis and teacher Christa McAuliffe perished after liftoff.

Going back to the statement by Judith about inclusiveness in space, it reminded me of the Apostle Paul’s declaration:

The church of Jesus is not based on ethnicity, gender roles, nationality, or any other human proscribed criterion. It is simply based on oneness in Jesus.

If the church had lived Paul’s words for the last two thousand years and embraced all men and women as one in Jesus, many issues and problems facing the church today would have never arisen. Limitations of service based on any of the items listed above are a human contrivance which fails to acknowledge the calling and gifts of the Holy Spirit to each believer for service in the religious community.

Turfdom and fallacious arguments have no place in today’s religious community. In the final analysis it is about people and what they bring to it.

For the church is more than a building. The church is people with their uniqueness from various strata of society and cultures.

Photo: View of Mission Specialist Judith Resnik sitting on the floor of the middeck of Discovery during STS-41-D. Beside her on a notebook is a note which says "Hi Dad." Above her head on the middeck lockers are various stickers such as "Beat Army," "Beat Navy," and "Air Force: a great way of life." Beside her is a [sticker] which reads "I love Tom Selleck." Image credit: Wikimedia Commons / NASA / Public Domain.