In the Foothills of Mount Purgatory 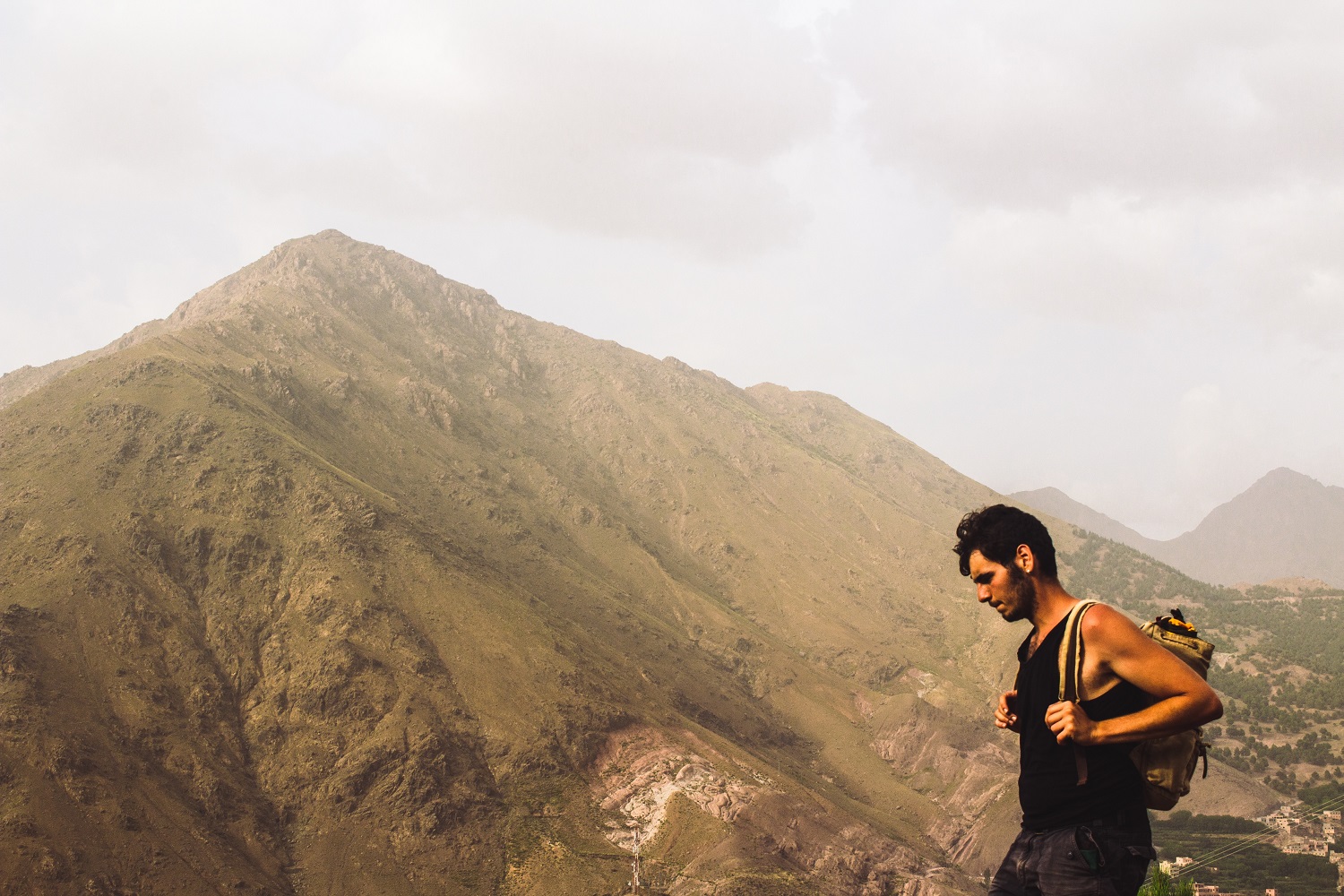 “Horrible was the nature of my sins,

but boundless mercy stretches out its arms

We sometimes meet people, usually on the downward slope of life, who can be quoted as saying, “When I look back, I have no regrets. Really. I wouldn’t change a thing!” This remark usually comes toward the end of an interview in which they have recounted not only the triumphs of their life, but also the harrowing moments in which they were shamed, humiliated, defeated, or otherwise thrown into the deep end, sometimes as a result of their own fecklessness.

And the tinny buzz of doubt lingers as we listen; do they say that because where they ended up gave them the luxury of distance from those troubles and a measure of success that softened the hard remembrance of those times? Could they have said that while gasping for breath after fighting ashore from the shipwreck of their lives or is the loss of regret only possible because they survived — and flourished?

I will own the fact that I have used those words myself, knowing at the time that they were said to satisfy conventionality, not to sustain authenticity. It’s a way to transition out of a sticky situation and to avoid the awkwardness of saying more than people want to hear about your life. Seeing that we play many roles in life with complete sincerity, one of those is the brave survivor who has weathered the storms without complaint.

But if we can grant each other these social passes without follow-up questions, we can also realize that reflecting on them privately can lead to revelation and discovery. After such reflection we might then truly say in all honesty that we would not change a thing, for now we see how grace enlightens and transforms our outlook. Even an incomplete awareness of the blend of what we call luck, accident, and choice, might open our eyes to the ways that God preserves us, along with our freedom.

I do have regrets, and if I could go back for a do-over there are certainly things I would change. I would not have jumped off a five-foot wall in college to catch a Frisbee in mid-air, only to land stiff-legged on the sidewalk instead of on the soft soil of the flower bed at my feet. Some days the reverberations of that foolishness can still be felt in my back and knees.

I would not have done a wheelie on my motorcycle in traffic, to the consternation of the drivers around me. The fact that I somehow did not flip on my head is no excuse. I probably should have grounded myself and taken away my keys for awhile.

But these are trivial examples; much more significant are the times I impulsively made a choice which I had instinctual doubts about. Call it intuition, call it conscience, call it the promptings of the Spirit or all three — in that tense present my life would have been better had I listened, as would the lives of the people I affected. And afterward, if I had reflected on why I found that way attractive, I might have at least seen the symptoms in time to look for healing. With time and distance, regrets can be for us a moral stop sign. As we remember them and reflect on them, they can help us change our future.

If we have a conscience and a rudimentary form of sympathy, we will experience regret for past actions or omissions. We need to let it do its work without stifling it. In our time, we have throttled regret in order to live without guilt, when both are as natural as jerking one’s hand back from a hot stove. But somewhere along the way, we stopped caring about our effect on other people and decided our actions were justified because they were ours. It’s as if the only way we can have a sense of self-worth is to deny that we have responsibilities to others. And it’s not as if we have to go all in and become steely-eyed Terminators: in order to weaken the ties to one another we need only to indulge ourselves at the expense of others.

In Dante’s Purgatorio, the Pilgrim and his guide, Virgil, have survived the desolation and horrors of the Inferno to emerge on the shore of an island. Mount Purgatory soars up behind them, and even higher up lies Paradise, but first they must traverse the foothills leading to the mountain. Here, those who delayed their repentance until the moment of death, learn humility. The Pilgrim, too, though over-confident at times in his journey through Hell, now wraps a reed, a symbol of humility, around his waist as he begins the trek upward.

A handsome young prince named Manfred, who put off the repentance of his sins until the moment of his death, approaches Virgil and the Pilgrim. He must now wait a long period of time before he can go through the remediation of his sins in Purgatory. His regret is palpable, as he confesses to the two of them:

“Horrible was the nature of my sins,

but boundless mercy stretches out its arms

As he talks, he bursts into tears. He had been excommunicated by the Church for posing a political threat to the Pope, but he exclaims:

“The church’s curse is not the final word,

for Everlasting Love may still return,

if hope reveals the slightest hint of green.”[3]

Rod Dreher, the author of How Dante Can Save Your Life, recalls that when he read Manfred’s confession, he too, wept for the fathomless love of God that draws us onward, even when we cannot understand such love.

“Given our finitude and brokenness, and God’s infinitude and perfection, we cannot hope to know God and his reality without divine assistance,” he writes. “Similarly, thinking that the solution to our problems can be found through using reason and logic alone — the default position of bookish people like me — may prevent us from seeing the true nature of our struggles. Do not expect reason and logic to comprehend matters of faith and will.”[4]

Should we remember our sins, especially when God is said to cast them into the sea and to remember them no more? Guilt can be crippling, remorse without hope corrodes like acid. It’s no wonder that the experience of God for many does not rise above the childhood belief that “He’s making a list and checking it twice/He’s gonna find out who’s naughty and nice.” A god who doubles as Santa Claus pays the price of bitterly disappointing a believer: both will inevitably get thrown out when the child wakes up.

It’s possible — perhaps inevitable, for a certain type of person — to overthink these things. Tolstoy was almost driven to suicide by struggling to reason out the physics of the sacraments, the logic behind forgiveness, and the ultimate purpose of life. For months, while in despair, he was vulnerable to taking his own life while out hunting on his estate. When he worked in his barn and came across a rope, it was all he could do to turn away from what he believed would be death by hanging at his own hand. “Contrary to us,” he wrote in A Confession, “who the more intelligent we are the less we understand the meaning of life,” the peasants who worked his farm “live, suffer and approach death peacefully and, more often than not, joyfully.”[5]

He came to believe that wealth was pernicious, that he and the people of his class were effete and useless, living lives that were meaningless and an affront to the millions of peasants whose simple, uncluttered, and unencumbered beliefs allowed them to live with joy and die at peace. “It was the activities of the laboring people, those who produce life, that presented itself to me as the only true way. I realized that the meaning provided by this life was truth and I accepted it.”[6]

He understood that simple working people act on the orders given to them without question, whereas people like himself sit in circles, debating whether it is beneath them or not to do as the master asks. The life of faith, he came to believe, begins with an action only dimly understood. But we will not get far without performing that action. Faith is acting on a promise to be fulfilled.

In a similar way, St. Paul came to regard all his advantages and achievements as the most zealous of Pharisees as so much garbage. All that mattered to him was the “surpassing value of knowing Christ Jesus my Lord.” And in language that can almost seem like hyperbole, yet with depths we still have not fathomed, he says, “I want to know Christ and the power of his resurrection and the sharing of his sufferings by becoming like him in his death, if somehow I may attain the resurrection from the dead.”

From those mysterious depths he rebounds with vigor: “Beloved, I do not consider that I have made it my own, but this one thing I do: forgetting what lies behind and straining forward to what lies ahead, I press on toward the goal for the prize of the heavenly call of God in Christ Jesus.”[7]

[5] Tolstoy, Leo. A Confession and Other Religious Writings. Translated with an Introduction by Jane Kentish. London: Penguin Books, 1987, p. 59.