The Fallacy of the Assumed Premise

The Fallacy of the Assumed Premise Jesus did not let religious or secular cultural norms cloud what was truly worthwhile. He embodied an expansive gospel. Sometimes, this debunked what false conservatives idolized. Jesus made room for the meaningful new by sifting out the irrelevant dross. Conservatives, in the best sense, preserve the core. Perception, experience, science, and history all flow in a way that brings a person on a journey of truth that unfolds in the context of scripture and a faith community. Which parts should a conservative fight to conserve?

People familiar with the OJ Simpson criminal trial might remember a reasoning error called the fallacy of the assumed premise. In reference to the bloody leather gloves, defense attorney Johnnie Cochran said, “If it doesn’t fit, you must acquit.” The gloves didn’t, and the jury did. The asserted premise was incorrect — the gloves may have shrunk or OJ’s joints might have been swollen because he had skipped his arthritis medication. The jury, mesmerized by Cochran’s catchy phrase, likely made the wrong decision and allowed a murderer to be exonerated.

This essay examines the proposition that the key premise of Genesis 1 is that the creation of humanity was the pinnacle of creation. After all, the creation of man evoked God’s declaration that it was not merely good, but “very good.” Next, the story states that God created Sabbath as a sign of His commitment to humanity. An anthropological prioritizing view of Genesis 1 leads to a different vein than a Sabbath prioritizing view.

Recently, our church adopted a brand promise: “We can help you understand the Bible to find freedom, healing and hope in Jesus.”

The Spectrum commenting community had a hearty discussion on the merits of the statement. One way to apply it would be as follows:

1. If, the main purpose of the SDA church is to be a community where humanity can flourish through discipleship and Bible study…

2. Then, by keeping Sabbath we emphasize the truth in Genesis 1 that tells of God’s joy and celebration in creating humanity in His image and we gratefully honor His promise of a weekly convocation…

3. And, as Revelation 14 implores us to honor the Creator at the end time, we fulfill the mandate by honoring and respecting the dignity of humans and nurturing this Jesus-infused quest for freedom, healing, and hope. This is true Creator worship. “Babylon has fallen” refers to a system which denigrates any person or persons. Seventh-day Sabbath observance is a witness against Constantinian coercion.

Here is another way to look at assumed premises in Genesis 1: 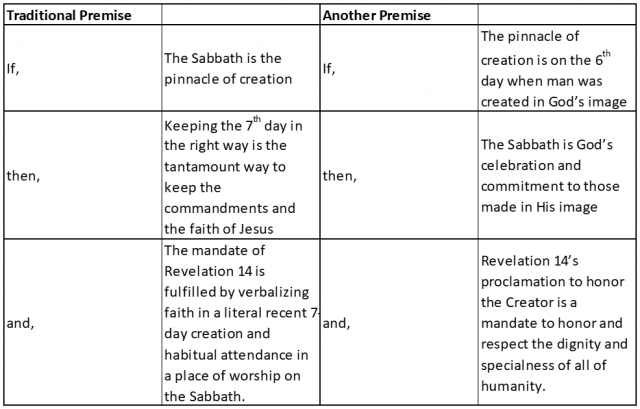 All humans, as creatures made in the image of God, are worthy of love and respect. This aligns with Jesus’ parable of sheep and goats in Matthew 25, which describes the activities of God’s people prior to the Second Coming. At the judgment, God knows the people who have cared for the forgotten.

Biologists, physicists, astronomers, and geneticists experience a cognitive dissonance that could be allayed if the church were to choose to emphasize a larger meaning of Sabbath. Some strands in the larger meaning could include Sabbath as freedom (Deuteronomy 5) or Sabbath as a sign of God’s commitment (see Sigve Tonstad’s book The Lost Meaning of the Seventh Day) or Sabbath as a protest against Constantinian influence over Christianity. Will remnant group behavior be characterized by a propositional protest against a tide of evil (evolutionary theory) that threatens to wash over a literal, plain meaning of Genesis 1? Is this conservative stand against science grounded in the right space?

Focusing only on literal seven-day creation minimizes a broader application of Revelation 14. To ignore the task of nurturing humanity is to ignore the values of Creator God. This is breaking the third commandment since it, in effect, is taking the Lord’s name in vain. In addition, the Adventist community would be in a healthier state if we used Revelation 14 in the more expansive way that emphasizes honoring the Creator by nurturing dignity of those who He has created in His image.

The name “Seventh-day Adventist” implies a distinctive message. Members are willing to be part of a minority, counter-cultural group because of a belief that there is a wave of present truth and transformative capacity in the denomination. What is the essence of this mission? Let’s be honest. In the last 100 years, our tribe has been so engrossed in protesting evolution and tooting our own horn on the right day that we missed the opportunity to protest racism, gender injustice, child abuse, and genocides (over a dozen by some counts). Since Sister White passed away we have grown to a group of 20 million people, but might it be wise to erase any triumphalism? Perhaps, fear of “becoming political” stilted the church’s witness during the 20th century. When one considers the meaning of the creation story in Genesis, is it possible that Seventh-day Adventists are emphasizing the wrong part?

The gospel is more than an externalized and static notion of truth. There can be no pride in right knowledge. In the context of the premise that Adventists are “right” about the Bible, consider an old critique of Luther’s Sola Scriptura predicting that when people left the Roman Catholic Church, they would still have a pope — “A Paper Pope” — the Bible. This reflected a prescient notion of the coming difficulties of basing “truth” solely on a collection of words. The Bible contains propositions, words, sentences, edicts, poetry, and legend. Which parts will a conservative Adventist fight to conserve? A lot of the conflict in our denomination stems from how we have read the Bible. If the main missional reason for Adventism is having the correct view on the Bible, then our group is sadly deluded in light of current tensions we face about how to use the Bible to inform decisions about church polity, ordination, and individual conscience.

For me, as a student of anthropology, peace, and human rights, the most helpful premise in Genesis 1 is the part that implies participation in society as God’s image bearers, and as people who note the image of God in others. What if battling scientific evolutionary theory is the wrong hill to die on and is ignoring the present truth which entails worshipping God in ways more demanding than merely showing up on a designated day? (Isaiah 29:13, Isaiah 58:6, Matthew 15:9, for example.)

Christian Wiman muses that “faith itself sometimes needs to be stripped of its social and historical encrustations and returned to its first, churchless incarnation in the human heart.” Protecting every iteration of propositional truth will be an exhausting enterprise for a person or a group. I believe a faith that emphasizes protecting propositional truth typically becomes a misguided exercise. After all, how many true things have been said? Do we have to enact a battle on behalf of every assertion that we think is true? Has every true thing already been said? As the Alcoholics Anonymous slogan says: “Let go and let god.” Following the Holy Spirit will yield a fruitful, abundant journey, drenched with meaning for the time in which one lives. This will put one on a path of positive anthropology, not a moral worthiness contest or an apologetic propositional truth debate. That is to say a disciple will be on a path of embodying truth, not in a debate about assenting to it.

Anne of Green Gables spoke of her friend, Diana, as a “kindred spirit.” I think God’s end time remnant will recognize others in the tribe in a way sort of like that. We won’t recognize one another on the basis of who assents to a common core of 28, 29, or 30 beliefs. We can recognize others as part of God’s family when we see them reflecting His image and honoring the divine image in the least of these. This will honor creation and honor God’s Sabbath commitment to humanity. God’s image will not be found in the principalities and powers. Jesus urges us to consider the children, adulterous women, Samaritans, lilies of the field, yeast infused dough, and lepers.

Carmen Lau is board chair of Adventist Forum, the organization that publishes Spectrum. She lives and writes in Birmingham, Alabama.

Photo by Mario Purisic on Unsplash