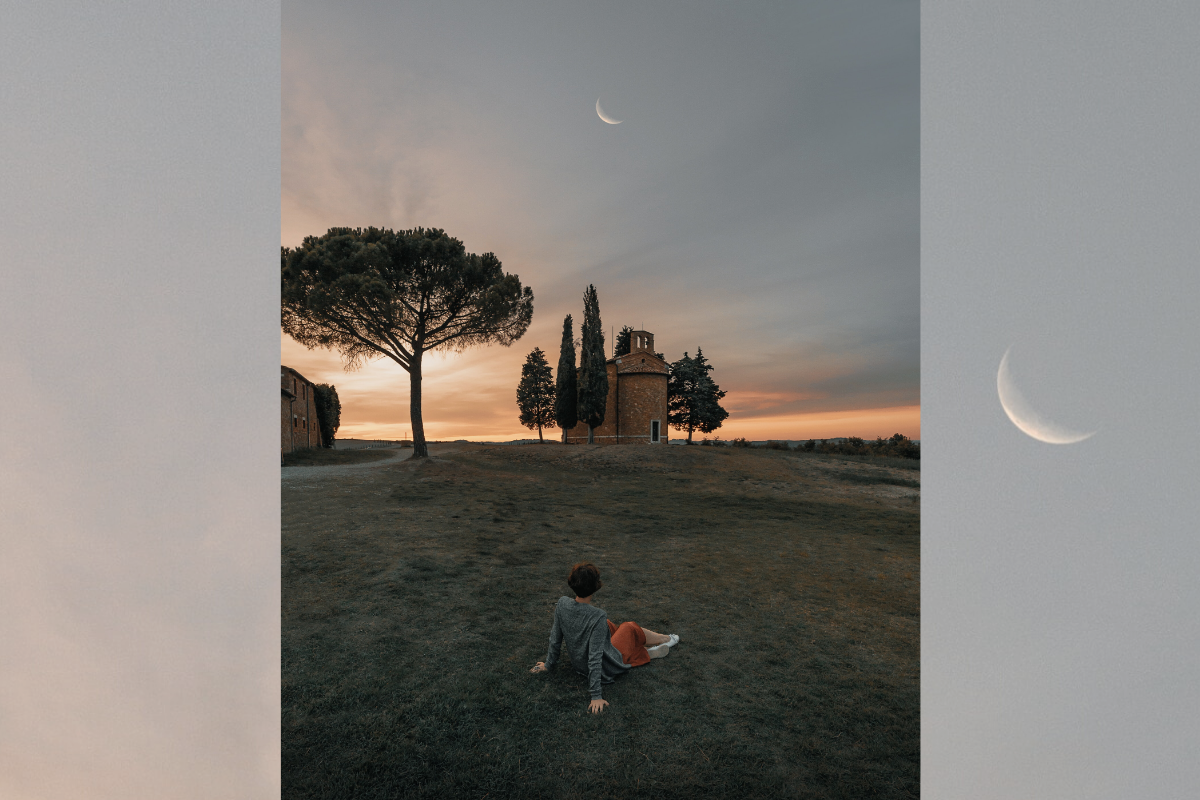 “And always in one

another we seek the proof

of experiences it would be worth dying for.”[1]

The older I get the more I seek a comprehensively simple understanding of life, a statement that may well be an oxymoron, but which I choose to think of as an achievable aspiration.

It’s not that I’ve given up on sorting out more complex issues — I still enjoy ploughing a deep furrow through a philosophical or theological text. But I need something portable, something that can easily be carried in a metaphysical backpack. It’s time to begin loosening the material bonds too, thinning out the possessions — except for books; they remain essential provisions — and generally traveling lighter and sailing higher in the water.

The idea that we can reduce a good deal of human experience to a simple statement, even one that we could live by with integrity and élan, is called reductionism and it is greatly to be resisted, according to scientific principles of research and testing. Science rides into the fray, knowing there is much more under the surface, and recognizing from the start that everything cannot be known about anything. This is a cause of much frustration for laypeople and politicians, both of whom suspect that scientists are hiding something when they hedge their conclusions and refuse to be as definitive as demanded for a press release or a Senate hearing.

Philosophers, of course, are hopeless when it comes to definitive statements. They refuse to be pinned down, preferring abstract principles to practical application. Most of them will get no hearing in the court of public opinion because hardly anyone wants to sit still long enough to hear an argument run through with sidebars and addendums, footnotes and preambles.

Cultural historians, child development specialists, gender and sexual equality researchers, all know to avoid that handy tool of human communication, the stereotype, because it cannot adequately express the infinite variety of personalities, motivations, and values that the human race exhibits. The underlying assumption behind stereotypes — that there are enough similarities between individuals in certain categories of human experience that general statements can be made with confidence — “these are like that” — is regarded with suspicion and sometimes outright hostility. Differences, not similarities, mark us as humans, they say. “Everyone is unique,” — to which the skeptic might mutter, “By whose authoritative standard of uniqueness?”

And theologians, “God-explainers,” what of them? Are they not firstly, keepers of the stories of what has been conjectured about God? They recount and interpret the history of what has transpired between humans and God: do they know with certainty what is going on now? Can they observe present religious experiences of humans and give us some clarity about the nature of God? Will they always be looking back or forward, leaving the present to the priests and the prophets?

We have it on good authority that we cannot comprehend the fullness of God (“My thoughts are not your thoughts”) nor can we expect our language to clearly represent our understanding of God. But we keep at it, with books, articles, poems, songs, paintings, drama, film, sculpture — the lot. All of that nets us possibilities for action and contemplation.

I had a professor in graduate school who had survived the fundamentalist purge at Princeton when he was a student and went on to write a definitive text on world religions, among other scholarly books. Although a staunch Presbyterian and an elder in his local church, he drew deeply from the wells of the living religious traditions of the world. He saw religion first as a universal project of humankind, a yearning to understand the rhythms of nature in the light of a great creative power. He saw it also as a long drama of the interplay between humans and their divine figures. And it was the occasion of worship and mystery, the language of silence and reconciliation. None of this could easily be translated into a catchphrase; he had nothing but disdain for bumper-sticker religion. But he was fond of saying, “Religion was danced out before it was thought out,” by which he alluded to the holy erupting through muscles, lungs, breath, and feet.

And I, coming from a tradition that frowned upon dancing, and not being at ease in my own skin, realized that circumstance and upbringing had inclined me to the cerebral, rather than the physical. I could no more see myself dancing before the Lord than I could imagine speaking in tongues. And though I had no doubt that the breadth of God’s attention to humans spanned all manner of expressions, I knew that my offerings would not stray far from language.

At the same time, religion for me was an intellectual discipline, subject to testing and systemization. There was a professional detachment to the study of it; one shouldn’t allow participation to supplant one’s objectivity. I had not found a way to scrutinize and examine my theology without jeopardizing my worship.

We are sometimes guided in life as much by repulsion as by attraction, by that which we do not wish to be as that which we earnestly seek to emulate. One of my religion professors in college served as an example of poor teaching, not because he was lacking in the knowledge of his discipline, but because of his caustic nature. Whatever benefits we could gain by attentive listening to him were offset by his withering criticism in the few moments given to discussion and questions. Where possible, we avoided his classes and where it was inevitable, we learned to flatter him. “He, to whom truth affords no gratifications, is generally inclined to seek them in falsehood,” said Samuel Johnson. Because we asked few questions after his lectures, he fancied himself to have covered the breadth of the topic to an overwhelming depth. But he was wrong.

He was a white South African, a man who had done missionary service in some of the poorest countries of Africa before he became a lecturer. One summer he returned home and when classes resumed in the fall, he seemed to be a man transformed. In class he was cordial, open, supportive, even humorous. We were staggered. We tested him: we asked questions that suggested doubt about his conclusions or that took a contrary position. One of the bravest among us even asked a transparently stupid question, one designed to elicit derision. He responded with kindness, without a hint of condescension.

It turned out that when he had traveled that summer throughout South Africa, he had had a conversion experience, both spiritually and socially. Something in him had broken and light had gotten through the cracks; he felt himself to be turned inside out. He had been weighed in the balances and been found wanting. In short, his heart had been moved and his character was now catching up to it.

His spiritual regeneration infused his teaching methods with a new openness to faith; he was less certain of the finer points of the Law and more sure of God’s grace and love. Where he had been hard and brittle, fending off intimations of spiritual doubt, his experience was giving him a resiliency that seemed almost playful. He seemed to be relieved of a huge burden.

This was a man who knew his doctrines from the ground up. He could argue the forensic theory of atonement, explain Paul’s Romans, explicate the symbols of Revelation, and outline the influence of the prophets on the message that Jesus carried and the Gospels reflected. Yet, none of this had penetrated below the surface of scholarship for him.

He was not a person who would claim a distinction between “religious” and “spiritual.” Any gauzy notions of personal transcendence apart from the spiritual communion of God’s people gathered in worship would have drawn a firm “No.” He would have agreed with Christian Wiman who says, “We do not need definite beliefs because their objects are necessarily true. We need them because they enable us to stand on steady spots from which the truth may be glimpsed.”[2]

It is entirely possible to grasp the truth, or more likely, the truths, about God and Jesus and the purpose of our lives, and still somehow not be touched by it. Life breaks us in a thousand different ways; we are swept away by the torrents of envy, hatred, ignorance, prejudice. In those times, the tentative threads of trust we have rigged up may be stretched to the breaking point. “Definite beliefs,” continues Wiman, “enable us to withstand the storms of suffering that come into every life, and that tend to destroy any spiritual disposition that does not have deep roots.”[3]

We study the Scriptures, we pray, we worship; we become alive to the presence of God in unexpected places and from unknown sources. We look to each other on these paths, “to seek the proof of experiences it would be worth dying for.” There are only a few definite beliefs, but there are radical mysteries enough for a lifetime and more. Jesus summarized the essentials without reducing them:

Micah spelled it out eight centuries before Jesus:

He has told you, O mortal, what is good; and what does the Lord require of you but to do justice, and to love kindness, and to walk humbly with your God?[5]

These are universals, cutting through all partisan walls, overturning the idols of political ideologies, capitalism, materialism, scientism, and nationalism. They are at the core of the great religious traditions of the world, and within them — in practice and in contemplation — is the radical mystery that God is love.