Book Review: The Second Mountain: The Quest for a Moral Life 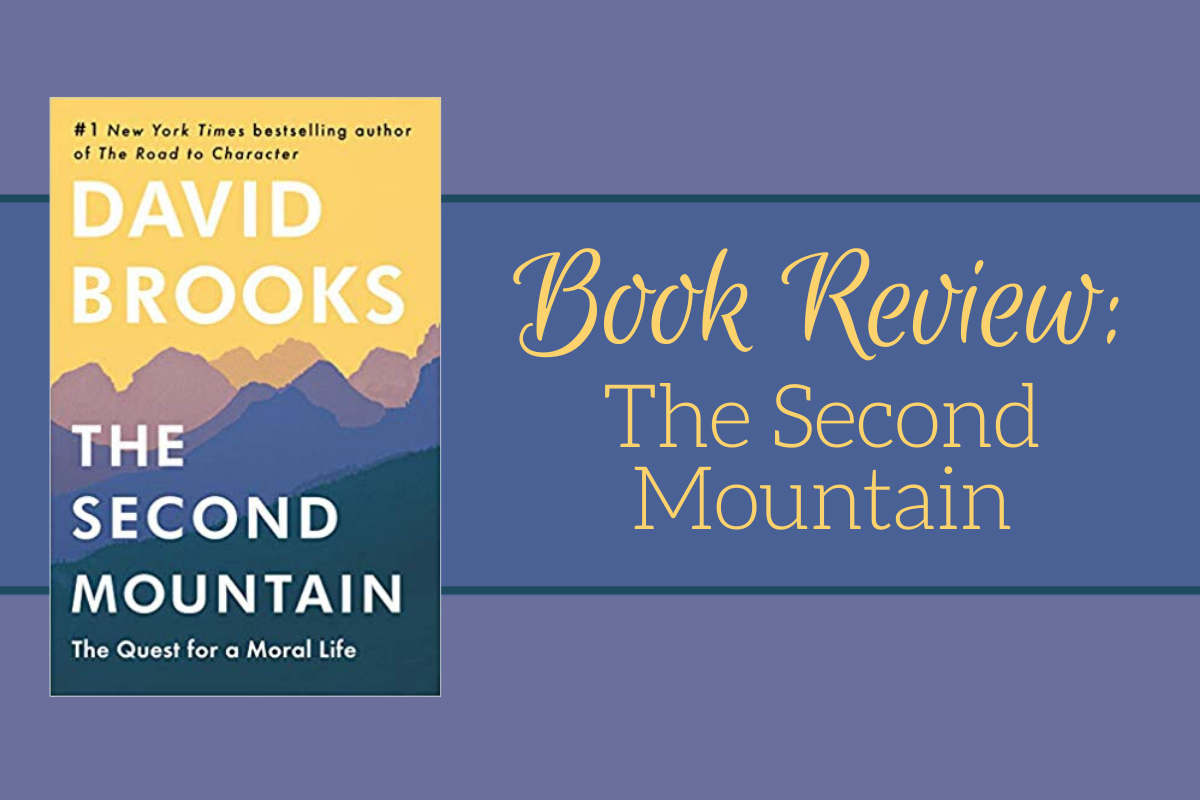 David Brooks, the conservative columnist for The New York Times and a weekly political commentator for The PBS NewsHour, has authored several books, including The Road to Character (2015), which made a number of bestseller lists. His latest book, The Second Mountain: The Quest for a Moral Life was published in April 2019.

The book uses a geographical metaphor of two mountains, with a valley in between, to represent a person’s potential life trajectory. The first mountain, as Brooks explains in his introduction, is centered on personal training and achievement, including such things as getting an education, choosing a career, establishing an identity, trying to make a mark in the world. It includes “the normal goals our culture endorses — to be a success, to be well thought of, to get invited into the right social circles, and to experience personal happiness,” including “a nice home, nice family, nice vacations, good food, good friends, and so on” (xii).

For some people, the first mountain is enough and they spend their whole lives on it. Others, having achieved first mountain success, find it unsatisfying and look for something more. Still others get knocked off the first mountain by some personal failure or tragedy, an accident, an illness, divorce, the death of a child. Now they enter a valley of suffering and reevaluation of the meaning and purpose of life. Some never get out of this valley. Others discover and start climbing the second mountain.

I’ve given you the crux of the book in four paragraphs. Why should you bother investing in reading the whole book? I’m alternately discouraged and amused by our societal pressure to condense more and more experience and information into our three score and ten years. God could have told us “hey, I’m a good person, trust me,” and saved us from reading a 2,000 page book with a bunch of weird names like Chalcol and Basemath, but apparently God thought a massive anthology of human-divine interactions would better help us to get the point. Likewise, although we can understand the core concept of The Second Mountain in about five minutes, embedding it as a living concept in our mental maps, at least mine, requires lots of examples and development, which is what the rest of the book provides.

Part I goes into more detail about the first mountain, its pleasures and deficiencies, the valley, and the second mountain. Part II, the larger part of the book, is called “The Four Commitments,” and it has sections on Vocation, Marriage, Philosophy and Faith, and Community. Along the way, Brooks uses personal experience as an occasional example — his difficulties include being divorced in 2013 and having a long self-examination after that, and being out of step with a broad swath of the Republican party in the era of Donald Trump. But most of the book, I am thankful to say, is not about David Brooks but about examples of Second Mountain people and Second Mountain ways of thinking.

The “Philosophy and Faith” section partly describes Brooks’ appreciation for conservative stalwarts like Edmund Burke and William F. Buckley, Jr. (whom he worked for), and his conservative philosophy. He goes on to talk about religious commitment, drawing from thinkers including Wendell Berry, Anwar Sadat, Václav Havel, Viktor Frankl, Paul Tillich, Henri Nouwen, and a host of others. One idea exemplified throughout the book is that Brooks is a voracious reader and distiller of the ideas and wisdom of others, such as John Stott, Augustine, Thomas Merton, Dostoyevsky, Reinhold Niebuhr, Kierkegaard, and Rabbi Soloveitchik. You’d think Mother Teresa would get a mention in there somewhere, and in fact there she is (248-249). Amidst this encyclopedia of experiences of spirituality, doubt and faith, Brooks weaves the story of his own faith journey, combining Jewish and Christian traditions. This section of the book really offers a doorway into many different thinkers on spirituality, and introduces the reader to authors deserving of further investigation.

I was especially interested in the last section, on community building. I have always admired people who have done a lot for others in the place where they live, particularly the disadvantaged, and I was blessed by the emphasis of our recent adult lesson quarterly on “The Least of These.” I have lived in so-called Adventist Ghettoes all my life (Loma Linda, Takoma Park, Angwin, Berrien Springs), and have done very little to be of direct service to the non-Adventist community. I’m all for serving within an Adventist context, and have dedicated my working life to this, but I’m also trying to broaden my interactions, inspired by multiple sources including The Second Mountain.

Brooks describes a healthy community as “a thick system of relationships” (261), where people care about and look out for each other. One such person he describes is Asiaha Butler, who grew up in Englewood, a poor and often violent neighborhood in Chicago. Asiaha and her husband were considering moving from Chicago to Atlanta for a safer environment, but they decided instead to try to make Englewood a better place to live. After volunteering in some local organizations, Asiaha created Resident Association of Greater Englewood (R.A.G.E.), “a resident-driven association established to build relationships with fellow residents, Englewood’s public officials, business owners and organizations. R.A.G.E. is a grassroots organization that strategizes to address community problems, creates tangible solutions (holistic and block by block) and actively seeks ways to keep fellow residents informed about the latest news in Englewood, Chicago” (from the R.A.G.E. website). There are also interesting stories about Dottie Fromal’s Thursday night community dinners program in Nelsonville, OH (274-275), Sarah Hemminger’s amazing Thread program in Baltimore (276-280) which connects underperforming high school students with a series of mentors and supporters, how the residents and city officials of Wilkesboro, NC, work together to revitalize the town (281-283), and many other examples of community building.

The book ends with an intriguing document called “The Relationist Manifesto,” in which Brooks at first critiques hyper-individualism, “the reigning ethos of our day” (297), and suggests a philosophy of “Relationalism” instead. In a change from the style of the rest of the book, this section is written in a series of numbered articles of faith. For instance, point 6 of 8 under “Relationalism” reads as follows:

“Relationalism is a middle way between hyper-individualism and collectivism. The former detaches the person from all deep connection. The latter obliterates the person within the group, and sees groups as faceless herds. The relationalist sees each person as a node in a thick and enchanted web of warm commitments. She seeks to build a neighborhood, nation, and world of diverse and creative people who have made commitments in a flowering of different ways, who are nonetheless bound together by sacred chords” (301).

Point 8 of 16 under Brooks’ definition of “The Good Life” reads as follows:

Hopefully this sampler of Second Mountain thinking will encourage you to continue to build community wherever you live — including on the Spectrum website. Reading and rereading the book will give you many more ideas about and inspiration for being a community builder.

Scott Moncrieff is a professor of English at Andrews University. He is always grateful for a good new book. And good old books, of course, are part of the family.