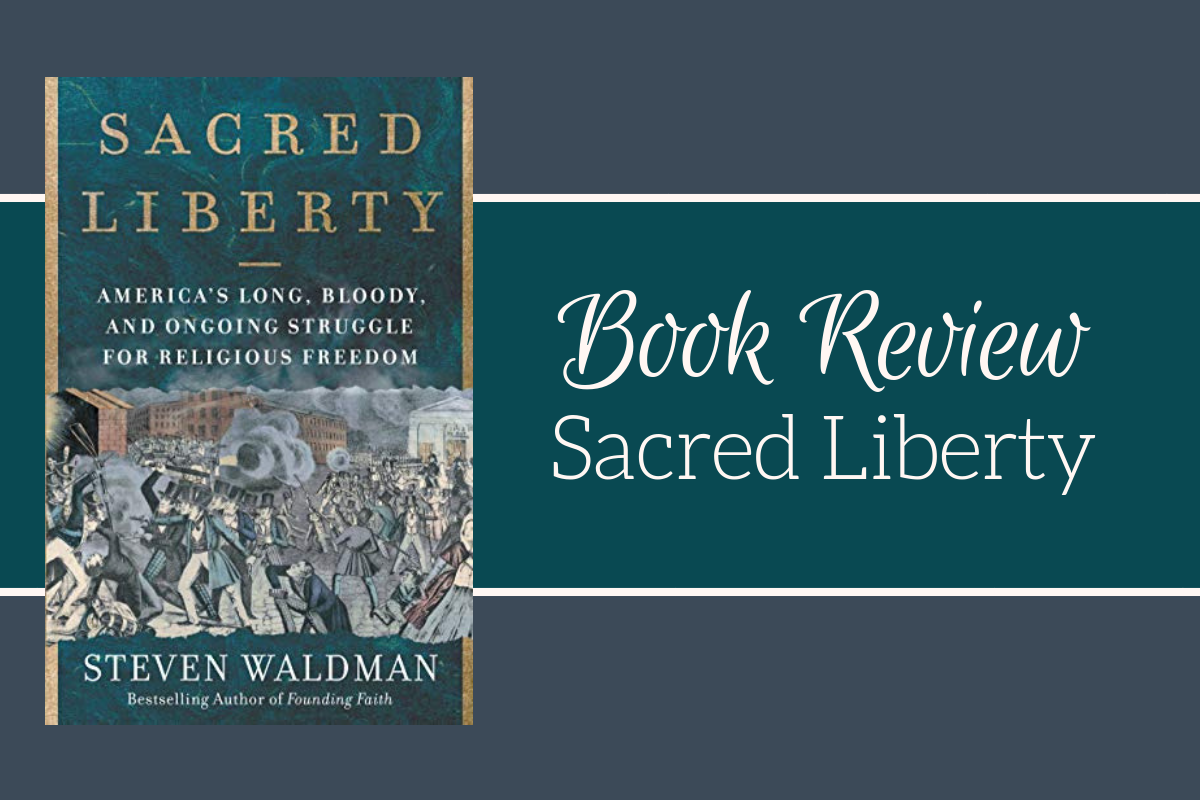 Steven Waldman tells the story of the American quest for religious freedom, ending with a look at our present dilemmas of fear and faith. This is Waldman’s second book on religion in America, the first, Founding Faith, being an examination of the religious beliefs of America’s founders. Sacred Liberty is not so much a sequel to that earlier work, but a companion volume, tracing the development and challenges to religious freedom throughout American history, though with an eye very much, in the end, on the present.

Waldman’s concern with the present comes at least in part because he writes not as a religious or legal historian, but as a widely-read journalist. This background serves him well on the whole, as his accessible, story-driven writing makes the book enjoyable to read, and his investigative reporting side causes him to move outside the well-worn ruts of much church/state scholarship.

We’ve all read about the freedom-stingy Puritans, Roger Williams and the Rhode Island experiment in freedom. We have generally heard of Madison’s contribution to the Constitution and the First Amendment, and the eventual incorporation of the Free Exercise and Establishment clause protections through the Fourteenth Amendment by the Supreme Court in the early to mid-20th century.

But we’ve heard much less about the religious beliefs of slaves and Native Americans, and the overt efforts by both churches and the government to replace these beliefs with versions of Christianity. Waldman reports that something like 10% of African slaves were Muslims, which would make Islam larger than Judaism and Catholicism in colonial America. But through a combination of coercion, pressure, and voluntary choice, this early Islamic presence was soon gone. The chapter on the coercive educational practices brought against Native American children in attempts to “civilize” and “Christianize” them equal stories usually associated with the medieval inquisition in terms of brutality.

Native American children were physically removed from reservations, parents who resisted were assaulted and at times arrested, and the children themselves were subject to harsh and unhealthy conditions. There were as many deaths from disease, illness, or suicide as one would expect from military units in battle, with one school recording 110 deaths out of a total of 640 students over a thirteen-year period. The children were required to attend church and study the Bible, and forbidden from practicing their native religions and associated rituals and dance.

Waldman also traces with accuracy episodes of intolerance and persecution that are more well-known to those familiar with American history. These include the war on Mormonism in the latter part of the 19th century, and the cycles of anti-Catholicism that would recur from time to time into the 1970s. The cultural and sexual revolution of the late 60s and 1970s caused faith communities to band together and face the common enemy of “secular humanism” and the rising tide of American “socialism.”

Waldman reminds us that the growth and activity of the KKK was driven as much by anti-Catholic animus as it was by racism. The leadership of the Klan were as concerned with keeping America Protestant as they were with retaining its whiteness. At one rally in 1927 in New York, Waldman informs us, nearly 1,000 robed Klansman marched at a Memorial Day parade to support native-born Protestant Americans and the right to “one flag, the American flag; one school, the public school [as opposed to Catholic parochial schools]; and one language, the English language.”

This reminder of how religious intolerance and racial xenophobia have been so closely intertwined in our history is made especially relevant by the revelation that Donald Trump’s father, Fred Trump, twenty-one at the time, was listed by local newspapers as one of the seven Klansman arrested at the rally. Charges against Fred Trump were dropped, but the historical evidence seems quite solid that he attended the rally, refused to disperse when ordered, and was likely dressed in a Klan robe. President Trump has flatly denied his father’s involvement in the Klan rally, but parts of Trump’s denial have been shown to be false, including his denial that his father lived at the address listed in the news accounts of those arrested.

This story of a Trump being connected with the KKK, racial animus, and religious intolerance in the 1920s is no mere gratuitous poke against the heritage of our current President. Rather, this point fits within a larger argument that Waldman is making in telling his history of religious freedom and intolerance. He tells the story of America’s fits and starts in pursuing religious freedom, and its frequent lapses into intolerance and persecution to make a point about the present — that America, with all its ideals of equality and liberty, is very much making the same mistakes of intolerance and even persecution against certain groups today, including immigrants, and especially Muslim immigrants.

In telling the story of earlier intolerance against Catholics, and then slaves, especially Muslim slaves, and then Mormons, and Indians, and then Catholics again, and then Jehovah’s Witnesses, he makes the point that the current outbreak of intolerance against minorities is nothing new. Our present concern and even fear of immigrant groups, along with a rising “Islamophobia,” is merely part of the American pattern of finding enemies to fear and unite against.

Many historians tell their stories of the past, and leave to others to apply it to the present. This can be wise, as it insulates one against accusations of presentism and of bias in the handling of the facts and stories from the past. On the other hand, history is generally written for a purpose, to tell us lessons for the present and future. If the history is to be useful, somebody is going to have to apply its lessons to the present, and who better to do that than the author himself or herself?

When a writer of history does speak about the present, however, one must look carefully for “cherry-picking” of historical facts and stories, to see if the history is being slanted to support the current concerns. But if the author seems to have been even-handed in telling the story, giving both sides their due, and not leaving out pertinent historical facts and elements, then they can be best positioned to discuss the current implications, as they are most familiar with the history itself.

Waldman, in my view, meets these standards. His training and experience as a journalist leaves him very willing to spin out the implications of his history for today. In my view he does a basically even-handed, careful, and relatively un-biased job in telling his story and making his lessons. At times, I think his more progressive, journalistic outlook does not let him take seriously enough the existential threat that left-wing liberalism at times can pose to the religious convictions of not just Evangelicals, but all traditional faith groups. Businesses of Christians not willing to participate in same-sex weddings have been fined tens and even hundreds of thousands of dollars, resulting even in their closure; employers of faith have been ordered to have themselves and their employees undergo mandatory “re-training” regarding matters of sexuality and gender; and Christians have even been ordered not to speak publicly about their convictions regarding the Bible and marriage. These are no small and inconsequential matters, as Waldman at times suggests.

In Waldman’s defense, he also chides the left as being too assertive and aggressive in not respecting the convictions of people of faith, and wanting to force them to bake cakes or make flower arrangements for same-sex weddings. He is on firmer ground when he talks about the hyperventilation by Fox News and other outlets about the “War on Christmas,” and the fear of Christians about their ideals being removed from the public square. This is a more serious concern in highly secular Canada or Western Europe, but not so much in the U.S. The Supreme Court has defended a robust reading of the Free Speech Clause, and its recent additions give it a strong majority to legally defend majoritarian Christianity.

And this is the real problem, as Waldman paints it, and I think realistically so. The Court will defend the majoritarian faiths in America, which at this point includes Evangelical and mainstream Protestants, Catholics, and Jews, at least most of the time. But there will be less concern for minority groups, whether from within the Christian, Protestant camp, and certainly much less for those outside it, especially those connected with Islam.

And here Waldman documents a widespread campaign within the conservative media to increasingly paint all Muslims as being connected to the extremism of radicalized Islamic groups that have come to be associated with terrorism. This painting is grossly unfair and misleading, and like insisting that all Protestants have a view of minorities and Catholics as held by the pro-Protestant KKK. This extreme portrayal is also highly dangerous, as our history shows the intolerance and even violence that often emerges from this combination of public hysteria and misinformation.

Adventists have predicted the rise of religious intolerance against an unpopular religious minority: who will be singled out with lies and misinformation; whose holy books and worship ceremonies will be vilified; and then who will be subjected to persecution and even violence. Of course, in the story, we, the Adventists, are the heroic victims. But it is sad that we cannot see this very story begin to happen around us, because it is happening to someone else. It makes me think we really don’t understand the principles involved in our own eschatology when we are simply unable to see its manifestation in the lives of others, and offer them care and support during their time of need.

I hope I am overstating the case. I know that some Adventists are connecting with local Muslim groups. Our Adventist American leadership has someone assigned to encourage our local churches to connect with Muslims and mosques. The University I teach at has made friends with the leadership of the local mosque, and I and others have been involved in friendly dialogue with them. Recently, when there was a bomb threat at their mosque, representatives from local churches and my university attended the mosque in solidarity.

But other voices in our community have joined in the strident anti-Islamism found in the conservative press. I just pray that more Adventists can read Waldman’s book, and see where its history warns us of just such extremism, and the intolerance and violence it can lead to. Just as importantly, I hope they can see the importance and opportunity of building bridges to these and other God-fearers while we have the time and opportunity. Our view of liberty is only truly sacred if we see its importance for others, and not just for ourselves.

Nicholas Miller is Professor of Church History at the Adventist Theological Seminary at Andrews University where he is also Director of the International Religious Institute. He recently published a book on the development of religious freedom and civil rights in the west titled 500 Years of Liberty: From Martin Luther to Modern Civil Rights (Pacific Press, 2017).