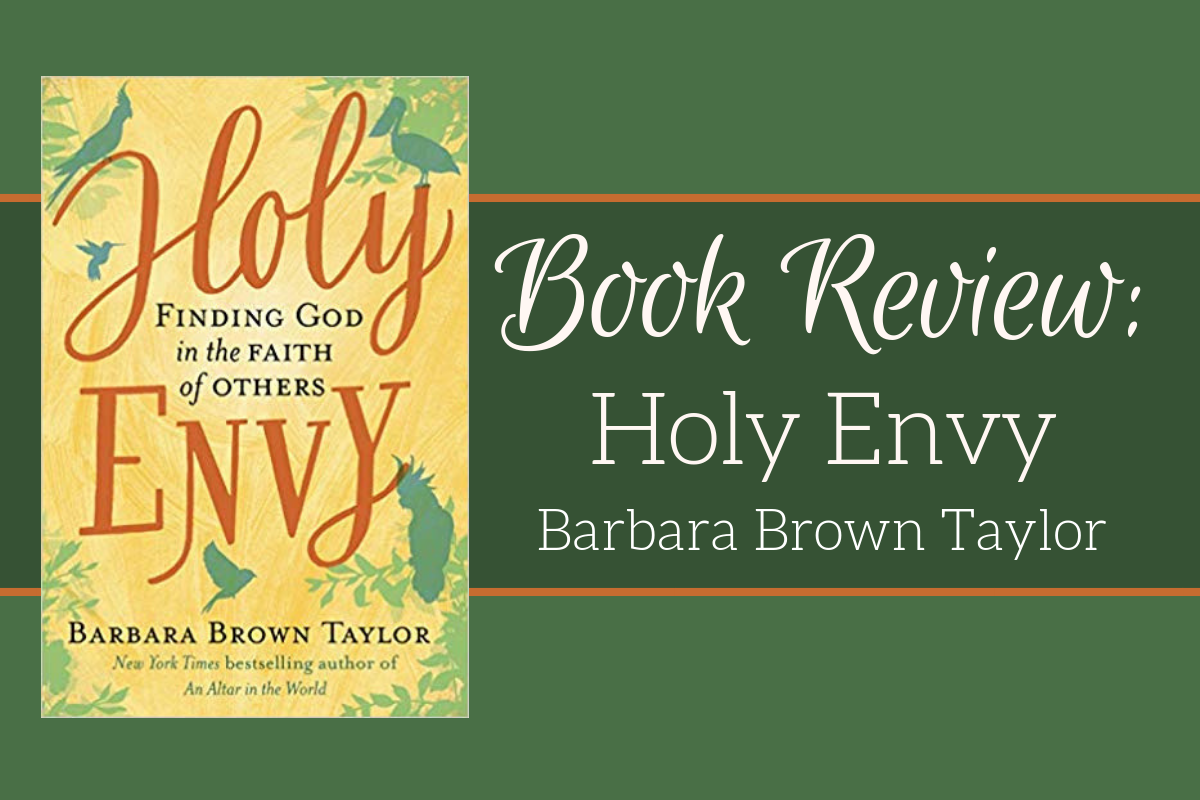 “The only clear line I draw these days is this: when my religion tries to come between me and my neighbor, I will choose my neighbor…Jesus never commanded me to love my religion.” —Barbara Brown Taylor

Sitting on my desk as I write, right next to a copy of Barbara Brown Taylor’s latest book Holy Envy, is my Worldviews and Religion textbook from high school. I remember sitting in that sunlit classroom of Andrews Academy my senior year, learning about all of the world’s major religions from this slim textbook, produced by the Seventh-day Adventist Church’s Office of Education. Wrong, wrong, wrong the book seemed to intone, as it laid out these other religions, their flaws exposed to the light while Christianity’s remained in shadow.

Despite the best efforts of the textbook creators and my teacher, I was struck by the beauty of these other ways to worship and to live a life of faith. I was fascinated by the idea of other people ensconced in the beauty and mysteries of their own divine whom they had known and loved since birth in the same way I had only known Adventism from my earliest memories.

In Holy Envy, Barbara Brown Taylor asks us to look again, to see with new understanding these other ways of approaching a mysterious divine that none can know fully, to embrace “the God just beyond our understanding.”

The title of the book comes from biblical scholar Krister Stendahl, who proposed three rules of religious understanding (65):

1. When trying to understand another religion, you should ask the adherents of that religion and not its enemies.

2. Don’t compare your best to their worst.

“The first time I heard the phrase ‘holy envy,’ I knew it was an improvement over the plain old envy I felt while studying other faiths,” writes Taylor. “With plain old envy,” she continues, “my own tradition always comes up wanting. The grass is always greener in the tradition next door….[but] when I look longingly at my neighbor’s faith, am I really looking for greener pastures, or am I simply trying to make peace with the realities of my own?” (64).

Those already fans of Taylor’s work (this is her 14th non-fiction book), will find familiarity in these pages, as she blends personal narrative from her decades of teaching Religion 101 at Piedmont College in Georgia with theological insight gleaned from her years as an Episcopalian minister.

With understated humor and humbleness, Taylor asks us to journey with her as she navigates her students’ assumptions as well as her own, and in the process, ours are sure to be revealed, too. In the first chapter she writes that this is the story of a Christian minister who “always promised her students that studying other faiths would not make them lose their own. Then she lost hers, or at least the one she started out with. This is the story of how that happened and what happened next” (1).

One of the many things I appreciate so much about Taylor’s writing is her forthrightness about her own assumptions and limitations; she writes with an authenticity and self-awareness that so few non-fiction books possess, and the reader is enriched because of it.

Taylor chronicles the times when she was made aware of the ways in which she was so entrenched in the Christian narrative that she couldn’t see how her words sometimes unintentionally disparaged those in other faith traditions, brothers and sisters in life who may be on different paths but journey toward the same divine. “As natural as it may be to try to translate everything into my own religious language, I miss a lot when I persist in reducing everything to my own frame of reference,” she writes (34).

She recounts the time a Jewish psychiatrist wrote regarding some of her published sermons and gently pointed out how some of the phrases she used sounded to Jewish ears. He was right, she says. “I had lived so long in the mainstream that I never even thought about how I sounded from the margins….If we want to hear and see more — even the parts that expose our scornfulness — we need partners from outside our in-groups to keep telling us how we sound” (88).

I especially appreciated how Taylor discussed the “religious strangers who played lead roles in Jesus’s life,” including the “Canaanite woman who expanded his sense of agency, the Samaritan leper who showed him what true gratitude looked like, the Roman centurion in whom he saw more faith than he had ever seen in one of his own tribe” (105).

Taylor tells us to read these stories again, asking us to pause in places that are often skimmed over, to dig deeper into the biblical text and see what is truly being said about how religious “outsiders” broadened Jesus’ own faith journey. “Our accustomed ways of hearing scripture often stop our ears to what is actually on the page,” says Taylor. “This is one of the reasons why I remain a devoted student of the Bible; because what it says is so often not what I have been taught it says, or what I think it says, or what I want it to say. Scripture has its own voice — sometimes more terrible than wonderful — but it has never failed to reward my close attention…” (105).

The grand narrative of the Bible, Taylor shows, is this all-abiding love for the religious stranger, for our neighbors of other faiths. We shouldn’t fear learning more about their relationships with the divine, because their understanding will lead to greater understanding for ourselves, and will enrich our own relationship with God.

The same Spirit that called me into the church called me out again, to learn the difference between the living water and the well. As surely as priesthood had given me a sturdy bucket for dipping into that well — and as clearly as I could smell the elemental depths of the divine mystery every time I bent over to draw some up — the well was not the water. It was a container and not the source (5).

Through Holy Envy, Taylor teaches us to hold our religion lightly in our hands, to examine it from every angle, appreciating its complexity and admiring its strength, while being critical of its weaknesses. Our religion is not the answer to the questions. God alone is. Religion is simply the lens through which we’ve come to know God and we should be gracious in allowing others their own lenses. As Taylor says, “the lens is not the landscape. It is a way of translating the landscape so that people can walk upright on it, making some sense of what happens to them” (24).

Image courtesy of HarperOne, an imprint of HarperCollins Publishers.