The Stories We Become

The Stories We Become 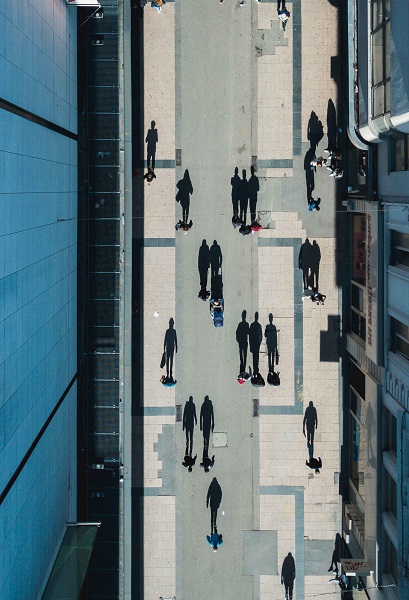 Are we a project or a discovery? Do we make ourselves or are we disclosed to ourselves? The question has been for me a touchstone of sorts, something I return to with intensity in liminal moments — those thresholds we cross that change how we see the trajectory of our lives.

As a college student in the 70s I was drawn to existentialism, especially the kind that Albert Camus lived out. Somehow, he brought together elements of Stoicism and Romanticism into a resolute philosophy of life that emphasized commitment to principle along with a sensuous enjoyment of nature. Being brought up by English grandparents in California in the 60s, in a home that was religiously devout and loyal to the church, oddly enough, paralleled that outlook and even converged at some points.

My grandfather was English, from Yorkshire, average in height, stoic in his perseverance without complaint, and quietly consistent in his gentleness and understanding. His commitments to principle were unwavering, but his ability to forgive was just as strong. God was a presence he rarely named, but he lived in gratitude for how he had been led that expressed itself in moments between us, especially as we talked while wrestling boulders out of our volcanic soil under the heat of a California sun.

Camus, on the other hand, refused God, but never managed to turn his face away completely. Since his only perception of God was that portrayed by the Church, he was inevitably disappointed. It seemed to me that he lived as if he wished God were real. He saw life as a beautiful tragedy, something that appealed to my adolescent romanticism.

But above all, he believed that we made ourselves through our decisions and actions. Life required commitment, faith in each other, a willingness to sacrifice for principle. Dr. Rieux, in Camus’ novel, The Plague, daily faced death as he worked to relieve the suffering of his patients, simply because it was the right thing to do. That sense of duty to principle is where the Adventism of my grandparents and the humanism of Camus overlapped. There was a cross-pollination that has influenced me to this day.

Because of our strong heritage from one of the founders of our church, Ellen White, most of us of a certain vintage have grown up with phrases like being “as true to duty as the needle to the pole,” and “Everything depends on the right action of the will.” In effect, most of us were raised as Kantians, with a strong sense of duty, manifesting a kind of “disinterested benevolence,” to use another of Ellen White’s maxims. We were encouraged not to trust our emotions, since they could easily be swayed, but to trust in Scripture, our spirit of prophecy, and the moral precepts we derived from both.

The idea that we “make” ourselves can go in several directions. We could think of it as a by-product of duty, not something to be sought after, but not something to be dismissed either. Or we could choose, like Aristotle advocated, to seek a higher end or telos, through cultivating the virtues, a choice that we make through reason.

Yet, as Adventists, we are conflicted about trying to become virtuous. It seems presumptuous to us to imagine that we could pursue such an end, even one directed to God. It seems to emphasize works over faith, as if we might work ourselves out of the need for a savior or somewhere along the way, slough off the Holy Spirit. We want to be virtuous, but we don’t want to look like we’re trying to be. There is also a virulent strain of perfectionism in current Adventism that is curiously hostile both to virtue ethics (because it relies on philosophy) and to grace (because it’s not rigorous enough). So, an understanding of how we might be nourished and strengthened by practicing the fruits of the Spirit and the virtues, for instance, is timely and welcome.

There is another way that we make ourselves and that is through the stories we imagine for ourselves about who we are. Dan McAdams, in his ground-breaking book, The Stories We Live By, calls them “personal myths,” and defines them as “an act of imagination that is a patterned integration of our remembered past, perceived present, and anticipated future.” Over the course of years, from adolescence to middle adulthood, McAdams says our personal myths should reflect increasing coherence, openness, credibility, differentiation, reconciliation, and generative integration. These six “narrative standards” are the elements of a good story in human identity, one that reflects who we are and lures us onward to what we may become.

As we become more differentiated in life, we face conflicts and paradoxes. Our personal stories become richer, more textured, as we learn to cope with suffering, disappointment, and conflicts. We seek reconciliation and harmony between the conflicting elements within ourselves and between ourselves and others. Reconciliation, says, McAdams, “is one of the most challenging tasks in the making of personal myth,” and psychologically, we’re not prepared to face it until in midlife.

McAdams’ research is original, but in some respects roughly parallels James Fowler’s Stages of Faith. Fowler argued that faith was a universal in human existence, and that one did not have to be “religious” in order to have faith. We look for order and patterns in the universe, and we live by what we find. He identified “faith as relating” and “faith as knowing,” and it is the latter that McAdams understands as contributing to our personal myths. McAdams sees the stories we construct for ourselves as developmental stages, “qualitatively different structures of religious belief and value.” He separates these into four positions, A through D.

Position A understands faith as specific rules about good behavior and has only vague notions about God, nature, human identity, and so forth. While it can be authentic, there is little reflection on meaning and even less on putting one’s thoughts in order. Nevertheless, it’s a beginning.

Position B, what Fowler calls “synthetic-conventional” faith, gathers up beliefs into a systematic creed or system, whether it be provided by the Church or the scientific enterprise. These are the positions, typically, of adolescents and young adults. There is structure within a system, but little questioning, either of beliefs or of the organizing principles.

With Position C, the individual moves beyond the conventions and begins to fashion a more individual and personalized faith structure. There is questioning of the conventions of the previous position and a good deal of soul-searching. We attempt to find something that is both authentic and truly expressive of who we think we are. And when we reflect on our faith and our conventions we may ultimately reject some and accept others — but the ones we accept will no doubt be those we reason are most honestly ours. We try to reconcile inconsistencies between our beliefs and those of other people through reason and logic. We wish the world were as reasonable as we are.

Position D, however, understands that reason is not enough. “A very small number of people,” says McAdams rather wryly, “beginning probably in mid-life, reorganize their beliefs and values in order to accommodate paradox and inconsistency in life.” In this phase we may gain a renewed appreciation for the simple stories of faith we grew up on, while at the same time recognizing that life is more complex and multi-layered than it first appears. James Fowler calls this “conjunctive faith” because it allows a person to join together ideas and images that are usually kept separate. It makes room for paradox and irony, qualities that are needed to think about the mystery of evil or the redeeming characteristics of our enemies and the darkness of our heroes. It lives with ambiguity and paradox. Some of its most articulate expressions are found in Soren Kierkegaard, Thomas Merton, and Parker Palmer.

It’s what I would call “innocent experience,” the quality of perception that comes after we take a fall from innocence into despair and knowledge and are forgiven and raised to a point beyond our innocence. If we’re fortunate enough to belong to a community, and humble enough to recognize our constant need for honesty, then we can live with paradox and uncertainty — and press ahead with faith.

If Position C — questioning and rejecting our conventional mores and theology — is the prodigal leaving home, Position D is the prodigal returning: wiser, humbler, and armed with a no-nonsense BS detector. The prodigal leaves home innocently arrogant, crosses over into weary cynicism, and returns with the gifts of openness and empathy.

In the summer of 2015, after the GC Session, I posted the following observation on my Facebook page. I think it applies now more than ever, especially since Annual Council 2018 (Battle Creek edition) presents us with an opportunity for authenticity, a way to re-imagine our faith together.

“It may be that in the post-San Antonio era, with another five years under Ted Wilson, many who have been Adventists all their lives, and many who may never have questioned church policy, procedures, and prejudices, will quietly realize how little they need to look to the church structure for their spiritual strength. They may see their friends, their pastors, those they have met online, their non-Adventist and non-Christian friends, as their spiritual community. They may understand that it's possible to be in the church, but not of the church, that we don't have to be hindered by unjust practices and blatant mismanagement to the extent that it blinds us to who Jesus is for us today. If we want, we can carry the invisible church within us every day. It will be exciting to see how we may grow and learn through adversity. We need to hold our fellow travelers close on this journey.” — Facebook, July 2015

Costumes and creeds do not a faith provide, but we can write a new story that does.

“Cease to dwell on days gone by
and to brood over past history.
Here and now I will do a new thing;
this moment it will break from the bud.
Can you not perceive it?” —Isaiah 43:18, 19