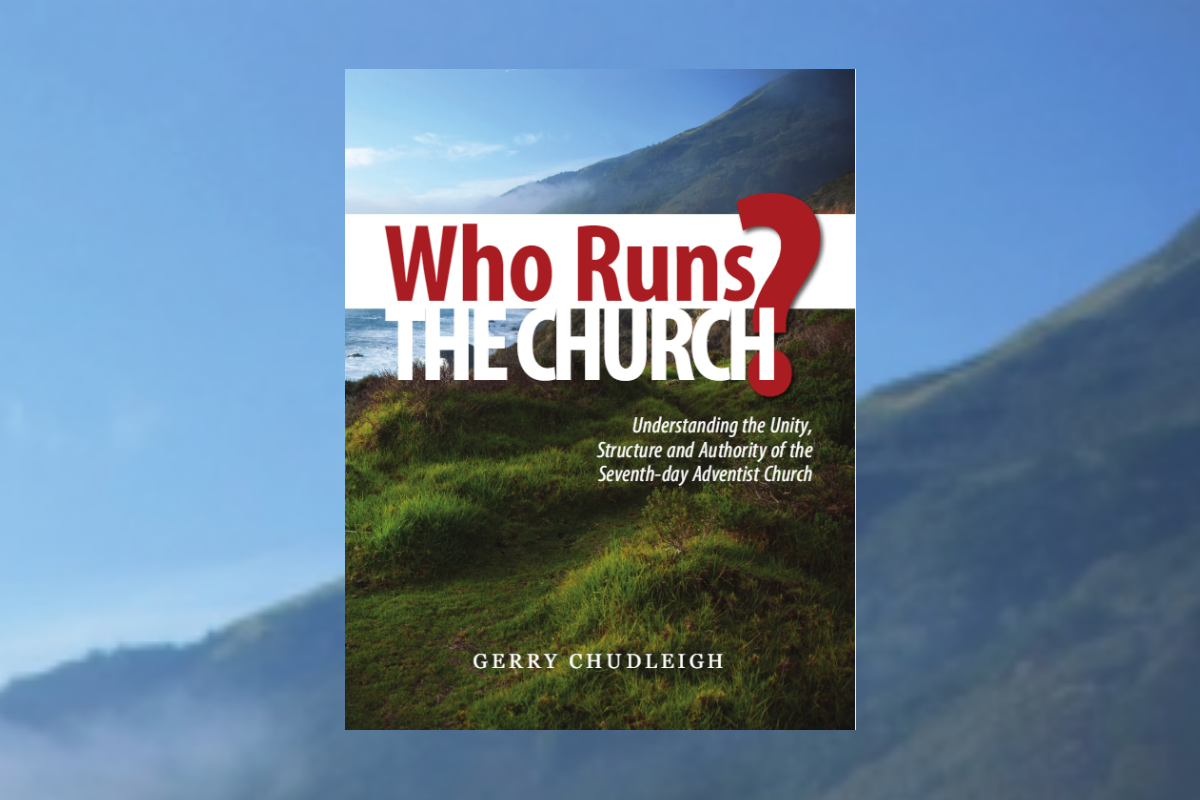 Editor’s Note: Gerry Chudleigh passed away in 2015. This summary of his seminal work on church governance is as timely today as it was when published in 2013. It was provided to us by Ray Tetz, who succeeded Gerry as Communication Director for the Pacific Union Conference.

When in 2013 Gerry Chudleigh published his book, Who Runs the Church? it was a question only relatively few were asking. Today, just five years later, it’s on the minds of many — just exactly who does run the church? Where exactly does true church authority lie? Is it top-down or bottom-up? Who has the ultimate say — is it the president or the membership? And exactly how should this actually work?

With all the current talk of imposing compliance, oversight committees, and punitive sanctions, it’s not surprising that even local churches are questioning what is happening to the church we love. Is this really the way we want to operate? Does leadership have the right to demand such measures? Would Jesus want us to be acting this way?

Chudleigh takes us back to basics and examines where we came from and our historic biblical position. He reminds us that early Adventists were very much against organization and creeds because of their experience at the hands of the denominations they came from — they were often censured and disfellowshipped for believing and preaching Jesus’ soon return. As a result, “the joyful unity early Adventists experienced developed outside of, and in opposition to, organized religion, both Catholic and Protestant.”1

While the need for some limited organization became apparent, especially in terms of the church holding rights to property, there was still opposition. Says Chudleigh, “Because organization was causing some to leave the already small band of Adventists, the church organized slowly and cautiously. Adventists never entirely abandoned their fear of religious authority, and that fear is the key to understanding the structures of the Adventist church, both the structure created in 1863 and the current structure, created in 1901.”2

Power concentrated in the General Conference

As the church grew, however, power became more and more concentrated at the General Conference in Battle Creek. Why was this a problem? Chudleigh gives five main reasons:

2. Centralized authority ignored the leading of God through the Holy Spirit.

The result of this over-concentration of power in the General Conference was that the church was hindered and the mission damaged, so much so that Ellen White spoke strongly against the leadership, and stated flatly that the voice of God no longer spoke through the General Conference. This led to a complete structural overhaul in 1901. Chudleigh observes, “Ellen White assured them she had no special instructions on how the church should be organized, but then spoke for an hour and a half on the need to completely rebuild church structure, to eliminate ‘kingly power’ — in the GC, the state conferences and the ancillary organizations — and to restore unity.”4

In order that there should be no doubt regarding the intention and the consequences, Chudleigh spells it out:

“1. Each union had its own constitution and bylaws and was to be governed by its own constituency. 2. The officers of each union were to be elected by their own union constituency, and, therefore, could not be controlled, replaced or disciplined by the GC.” Even more tellingly, he continues by saying:

“To put it as bluntly as possible, after 1901, the General Conference could vote whatever it wanted unions and conferences to do, or not do, but the unions and conferences were autonomous and could do what they believed would best advance the work of God in their fields. The GC executive committee, or the General Conference in business session, could vote to fire a union president or conference president, or vote to merge a union or conference with another one, but their vote would change nothing: the union or conference would still exist and the member delegates could elect whoever they wanted as president.”6

Chudleigh also spells out the results in terms of how this decentralization of power and authority worked in practice:

“1. Local churches have the final authority to decide how donations to local congregations (but not tithe) will be spent, to plan local evangelism, and to decide who will be members of that congregation. No other church body, including the local conference, the union conference or the General Conference has the authority to override local decisions in those areas. 2. Local conferences have the final authority to budget expenditures from tithe, to form and disband local churches and schools, to hire, fire and supervise pastors and teachers, and to own and control property related to those local institutions. 3. Union conferences own and operate colleges and universities and grant approvals where conferences desire continuity, cooperation or uniformity, such as the approval of candidates for ordination. 4. Divisions do not have separate constituencies or bylaws, and their officers are elected at GC session by the General Conference constituency, so they are administrative units of the General Conference. 5. The General Conference administers the worldwide budget, which is critical to the growth of the church around the world, especially in mission areas — areas of the world church funded to some extent by tithe and donations from other parts of the world.”7

However, since 1901 there has been a gradual shift back to the GC of the power lost in 1901. Chudleigh states the problem, and asks the question: “A large part of the authority that was distributed to the Unions in 1901 seems to have drifted back to the General Conference. Why? How?”8

Chudleigh points to three main factors he believes are primarily responsible for the drift back to a centralized, top-down hierarchical system: Ellen White’s “highest authority” statements, model constitutions and bylaws, and leadership initiatives.

He then outlines Ellen White’s changing position on the General Conference as the voice of God, culminating in her clear view that she could no longer state this was so. While she made different statements at different times, as Chudleigh comments, “it is clear that sometimes Ellen White considered the decisions of the General Conference to represent God’s leading and sometimes she did not.… It is apparent that whether she did or didn’t believe the GC in session was God’s highest authority on earth, she did not believe it was necessary for that group to be the final word on how ministry was done around the world. She made it clear that God can give wisdom to union and local committees as well as He can give wisdom to the GC committee or GC delegates in session.”9

Chudleigh then finally observes how General Conference leadership initiatives have tended to give the impression of a top-down hierarchy — when ideas and policies are generated at the GC and then sent out to other units, it appears that this is where ultimate authority lies. While there is nothing wrong in generating good policies and programs, as Chudleigh comments, “every time the GC creates a committee, institute, program or policy, especially one that the unions around the world appreciate, adopt, and use, the image of the GC as the top of the chain of command — the final authority — is strengthened.”11

Not a top-down power structure

Chudleigh’s ultimate conclusion is found in his Appendix A, when he outlines his experience as a church worker. “So, year after year, the church goes on functioning without a hierarchical structure, and year after year the vast majority of members seem to believe it is hierarchical. This is most evident when members complain that higher levels of church administration are not stepping in to fix something the members think should be different at lower levels. But it is not at all surprising that members, including some pastors and a few popular Adventist web bloggers, do not understand Adventist church structure. I know of no other organization on earth that has the non-hierarchical division of authority that our pioneers built into the Adventist church in 1901.”12

This is in direct contrast to the current General Conference’s plans to impose sanctions on unions for supposed “non-compliance,” plans that demand complete acquiescence with a top-down authority structure that uses oversight committees to police the church, plans that circumvent even the General Conference Executive Committee to ensure the will of the president and his supporters is obeyed. If such plans are accepted, our church will have ceased to be a body of believers united by Christ and will become what we have deplored since our inception — a religious organization based on imposed authority and coercion through power.

Were he writing today, I believe Chudleigh would conclude that no church structure that imposes authority from above, that seeks to dictate on matters of conscience, and that would even think about sanctioning fellow brothers and sisters in Jesus for “non-compliance” — no such system should ever be considered by those who follow the Lamb. Jesus said, “Among you it will be different. Whoever wants to be a leader among you must be your servant” (Matthew 20:26 NLT).

Who Runs the Church? by Gerry Chudleigh is available in booklet form through AdventSource (https://bit.ly/2ILXXeS) or as a downloadable pdf from Spectrum below:

1. Gerry Chudleigh, Who Runs the Church, p. 6. Available at: https://session.adventistfaith.org/uploaded_assets/454468

12. Chudleigh, p. 40. The other appendices are worth reading too.