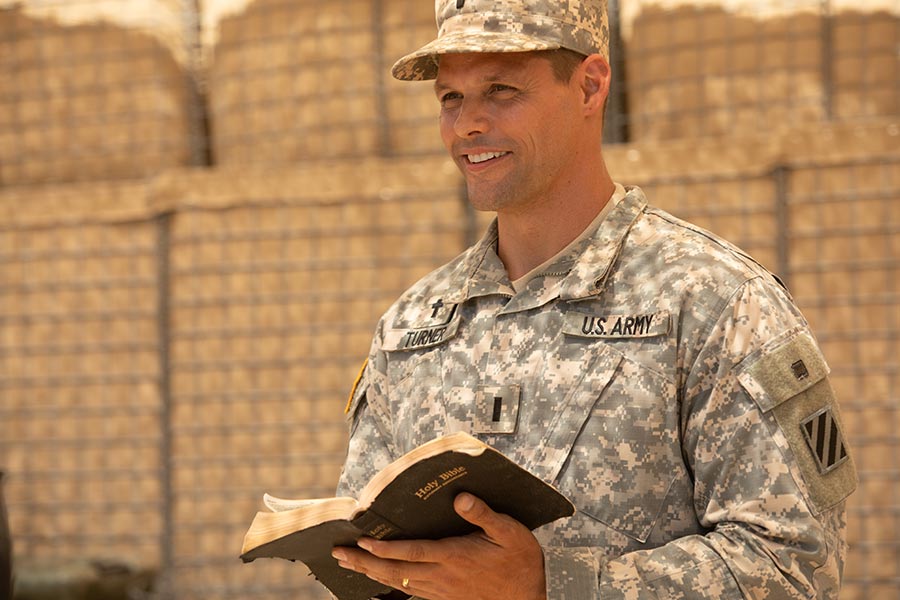 Indivisible tells the story of U.S. Army Chaplain Darren Turner, and his 2007 deployment to Iraq. He had just finished chaplain school and been assigned to Fort Stewart when his unit deployed for 15 months as part of the “Surge.” He had been in the Army only three months. Over the course of the deployment the battalion had fifteen casualties, and multiple IED and rocket attacks — what a way for a brand new chaplain to start his ministry! He came back messed up, and that led his wife to kick him out of the house and for him to leave the Army for a job at Home Depot (a greenhouse in the movie). After a year apart, and serious marital counseling, he and his wife, Heather, got back together and he re-entered the Army, where he has served since.

It’s a “Christian film,” and these evangelical filmmakers are slowly getting better in their story telling. There’s no simple “pray to Jesus and it’s all better” moment. Still, the storyline is condensed, and it does suggest everything gets neatly tied up — which it doesn’t in real life.

They needed a military advisor on the film — any Army vet will notice lots of silly errors.

But the movie does this: it shows that war takes a toll. It shows that it takes a toll on Soldiers, their families, and on the chaplains who care for them. It shows the disconnect between families at home and deployed (the wife needs support after a crisis and feels her husband just doesn’t care — he doesn’t tell her about the ambush he just got out of). It shows that healing takes time.

Turner as depicted in the film reminded me of some young naive chaplains I’ve supervised. They struggle to adjust to the Army, struggle to connect their head theology with life, struggle to find their place. But most end up bonding with Soldiers over the course of a deployment. Nothing makes for effective young adult ministry like spending all your time with young adults. Chaplains call it “ministry of presence.”

Reporter Moni Basu wrote about Turner over the course of his deployment and afterwards. She’s collected her articles into a book, Chaplain Turner’s War, that I found more compelling than the movie. It’s a contemporaneous account, without agenda, by someone watching him do ministry, and seeing the impact of the war on him.

Still, if we military types can push aside the annoyances, the film can be a starting point for a discussion about war’s impact — especially on us chaplains. It’s a discussion we seriously need to have. The chaplain branches of each service are doing a lousy job caring for chaplains after war. The courses for supervisory chaplains give few tools for them as pastors of hurt pastors. A “Moral Injury” course at Fort Sam Houston in San Antonio is not required (it should be). Denominational officials who endorse chaplains for the military aren’t doing much better. We need to be intentional in having these conversations with our chaplains (and Adventist Chaplaincy Ministries will do so at our upcoming military chaplains’ retreat).

The United States has been at war seventeen years. Some of my fellow chaplains have been to war seven, eight, or more times. Many have been wounded in body and soul. Families have been wounded. We have ministered after battlefield trauma, and in the aftermath of suicide after suicide — and are expected to always be cheerful and always have a message of hope. Like other veterans, we wear masks, so you often see an illusion and not the pain we carry. Indivisible, despite its weaknesses, takes the mask off. It shows the costs of war on the human soul and psyche. And it says that healing is possible, but it may take time.

Chaplain (Major) William Cork is Assistant Director of Adventist Chaplaincy Ministries for the North American Division. He is a chaplain in the Army Reserve, currently serving as a member of the Strategic Initiatives Group in the Office of the Chief of Chaplains.