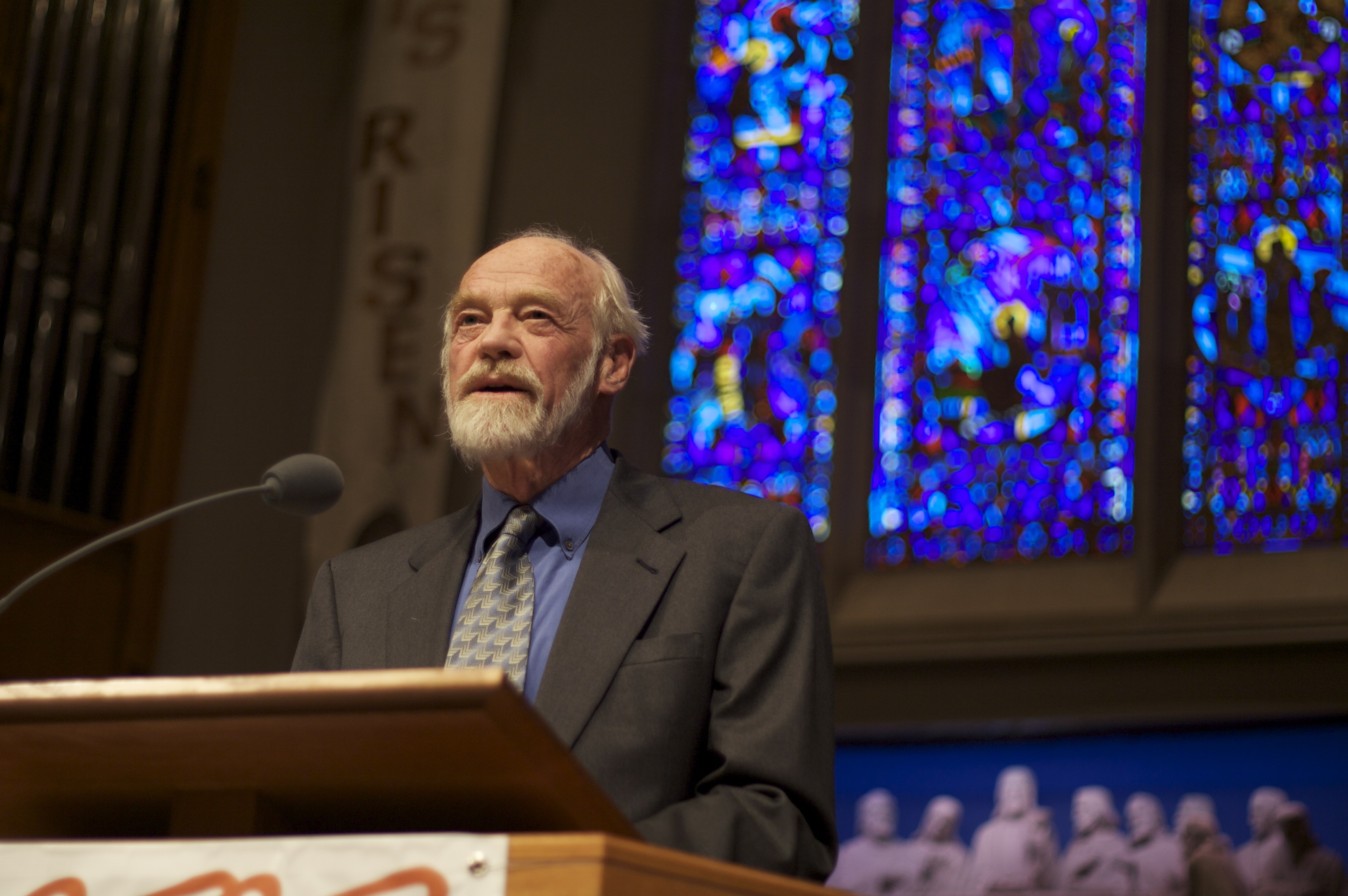 Moments before class, I saw the headline “Eugene Peterson Has Died at the Age of 85.”1 Although I knew he was in hospice care, I was still caught by sadness. A student peeked into my office with a question and I closed my computer. We walked together to class. Of course, I was still thinking about Eugene. Somehow, it was fitting that I would be teaching young writers this morning.

Over a decade ago, I was the young writer applying to be a writing coach at Collegeville Institute, an ecumenical center in central Minnesota. I had nearly completed my graduate degree at the University of Minnesota, and I was broke. On the morning of my interview, my car wouldn’t start. Don Ottenhoff, the director of the Collegeville Institute, had to meet me at a coffee shop near my apartment.

“No,” I said, and I could see the surprise on his face.

“Well, you would be teaching with Eugene,” Don said and laughed. “You should look him up. He’s very well known.”

I did look him up — certain that I wouldn’t get the job — and as soon as I saw Eugene Peterson, I realized that, of course, I knew him. I owned the Message Bible and read it often as a devotional. It would have been nice, I thought, trying not to feel too regretful.

A few days later, Don offered me the job. He must have appreciated my honesty or maybe he believed in second chances.

For a week, I taught alongside Eugene Peterson. He was wise, kind, funny, and gracious. Boy, was he gracious. (If he thought I was using too many adjectives here, he wouldn’t have said it aloud.)

Teaching at Collegeville Institute was wonderful and terrifying. The summer session was called “Writing and the Pastoral Life: A Week With Eugene Peterson” and the twelve participating ministers were all there for Eugene. Even if you didn’t know who he was, you just wanted to listen to him talk.

And then there was me — awkward, eager, anxious, and somehow still an MFA know-it-all. I wore jeans — it was a casual atmosphere — and pulled my hair into ponytails. I looked ten. One minister would tell a theological joke and the laughter would carry around the room above me.

In the mornings, the ministers met with Eugene and talked about balancing the ministerial and writing life. Instead of attending these sessions, I took long walks with Jan, Eugene’s wife. It’s impossible to regret my decision because Jan became my friend. She told me stories about meeting Martin Luther King Jr. and about her kids, all in the same breath. During one of our walks, she told me how she and Eugene read books aloud at night. She would read one page and he the next.

“You need someone,” she told me. “Some people are cut out for the single life, but you’re not one of them.”

In the afternoons, I was in charge of the writing workshop. Each minister had submitted an essay draft and we would discuss the piece together. My job was to keep the conversation moving, to draw participants’ eyes to where the paper was really humming, and to talk about places that needed more tending. I sat at the head of the table, next to Eugene. Our name cards were before us — as if anyone needed to know who Eugene was.

Those first workshops felt like a roller-derby, except everyone was exceedingly kind. All the participants were gifted leaders and writers, and everyone had opinions. Because I was so young and inexperienced, it was hard for me to stop the conversations for break time. It was hard to bring everyone back from breaks. Through it all, Eugene listened attentively and took notes. He didn’t say much.

The only time Eugene spoke was when everyone in the room seemed to doubt my advice. He would raise his hand and wait until it quieted. Then in a voice so soft that everyone had to lean forward, he would agree with me, articulating my point so much better than I had. “I’m learning a lot from you,” he once said without a trace of irony.

One evening at dinner, I told Eugene I was an Adventist. His eyes brightened. “I get a lot of letters from Adventists,” he said. “I get more letters from Adventists than almost anyone else.” I started squirming. “They tell me I’m right about a lot of things, but I’m wrong about the Sabbath.” He laughed as he spoke. Before I could reply, he told me all the things he admired about Adventists. I can’t remember what he said. I just remember feeling seen in the most positive light.

For three summers, Eugene and I taught together. When Bryan — my now-husband then-friend came to visit me at the institute — Jan pulled Eugene over so that they could interrogate Bryan. “He’s very nice,” Jan later told me.

It’s been years since I’ve last seen Jan and Eugene. Bryan and I have been meaning to visit them in Montana. They gave us an invitation, and we knew they meant it. They were famous for their hospitality. We never got there.

Today, I messaged Bryan, who is still not religious, that Eugene had died. He wrote back, “I’m sorry to hear about Eugene. He was a good example of a true Christian spirit.”

That’s right, I thought. He certainly was to me. Sari Fordham teaches creative writing at La Sierra University. She has maintained a close connection to the Collegeville Institute and occasionally returns as a writing coach.