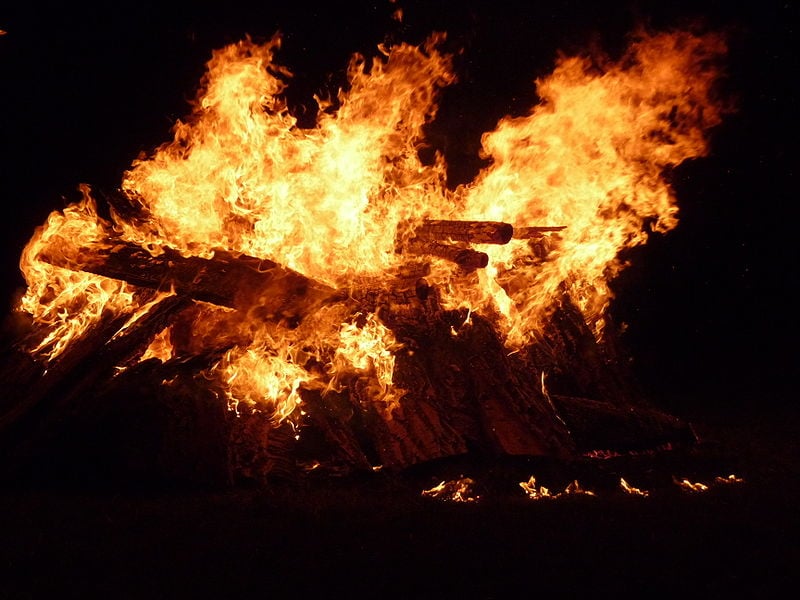 Before the Israelite sanctuary was established, sacrificial worship of YHWH (personal name of the Lord) was carried out through burnt offerings (e.g., Gen. 8:20; 22:13), and sacrifices of well-being (Exod. 24:5; cf. Gen. 31:54). Along with its function of invoking the Lord, the burnt offering could also serve to symbolically expiate (remove) sin (Job 1:5; 42:8). Sacrifices were dynamic object lessons concerning life and death stakes involved in the divine-human relationship. While they served as types/symbols of greater reality (see below), they were occasions of real spiritual transactions by which people accepted the sacrifice of the coming Savior.

When the sanctuary went into operation, burnt and well-being offerings continued  (Lev. 1; 3; cf. 7:11-36—including for joyful occasions), with burnt offerings providing expiation in general (1:4). In addition, the Lord mandated two new kinds of animal sacrifices to fulfill specialized expiatory functions: purification (so-called “sin”) offerings and reparation (so-called “guilt”) offerings. Women could offer sacrifices as worshipers (e.g., Lev. 12:6-8; Num. 6:1-21), but all women and most men were unauthorized to perform priestly officiation, which was reserved for male descendants of Aaron.

Purification offerings, which could be supplemented by burnt offerings, remedied inadvertent violations of divine commands (Lev. 4; Num. 15:22-29) and certain hidden sins, such as deliberate neglect to answer a public adjuration to provide testimony and sins of forgetful neglect (Lev. 5:1-13), as well as serious physical ritual impurities that could affect the sanctuary (e.g., 12:6; 14:19; 15:15; Num. 19:9).

Physical impurities incurred by men or women represented the birth to death cycle of depravity and mortality that results from sin (Gen. 3; Rom. 5:12; 6:23), i.e., the state of sinfulness. Therefore, Israelites were to keep such impurities from contact with the earthly sphere of divine holiness connected with the resident presence of God (e.g., Lev. 7:20-21; 15:31), the Source of life. The fact that sacrifices pointing to Christ’s sacrifice purified Israelites from physical impurities signifies that Christ died not only to redeem us from sinful acts, but also to heal us from our state of sinfulness and mortality (cf. Ps. 103:2-3; Jn. 3:16). Now that Christ ministers in the heavenly temple (Heb. 7-10) and there is no earthly holy place, the bodily purity regulations to safeguard an earthly holy place are irrelevant. We are all impure in this sense and it doesn’t matter. Nevertheless, the biblical purity texts teach us about our nature in relation to that of God.

Reparation (so-called “guilt”) offerings remedied sacrilege caused by inadvertent or possible misuse of sacred things belonging to God (Lev. 5:14-19) or deliberate misuse of the divine name in a false oath used to defraud another human being (6:1-7 [Hebrew 5:20-26]). These sins involved misappropriation of property, which was to be restored, but no financial price could be attached to “debt” for commandment violations that required purification offerings.

There is a common misconception that Israelite sacrifices could not expiate for deliberate offenses. However, both purification and reparation offerings remedied some deliberate sins (Lev. 5:1; 6:1-7). Furthermore, the wide scope of expiation already available through burnt offerings could take care of other kinds of deliberate sins, provided that they were not defiant (“high-handed”; Num. 15:30-31) or otherwise incurred terminal penalties of capital punishment (Ps. 51:16; Hebrew v. 18; cf. 2 Sam. 11) or “cutting off” (a divine penalty that denied the sinner an afterlife; e.g., Lev. 20:2-3).

Sacrifices included both “objective/legal” and “subjective/experiential” elements (cf. 2 Cor. 5:19-20). Corporate regular sacrifices provided expiation, which symbolically removed the (legal) “debt” of sin, for the whole community (Num. 28:1-8, 15, 22, 30, etc.), and priestly officiation did for the people what they could not do for themselves. However, when Israelites realized that they had sinned, they were obliged to bring individual sacrifices in which they participated to personally receive the benefit of restored relationship with God (Lev. 4-5, etc.).

The scope of expiation provided by Christ’s sacrifice is greater than that which was available through all of the animal sacrifices put together (Acts 13:38-39), which were only symbolic “shadows” of the truly effective reality to come (Heb. 10:1-18). So even though the huge crimes of Kings David and Manasseh could not be expiated through animal sacrifices, God could forgive them when they repented (2 Sam. 11-12; Ps. 51; 2 Chron. 33) through the coming sacrifice of His Son.

English versions have commonly rendered the Hebrew term for “purification offering” (ḥaṭṭa’t) as “sin offering.” It is true that the Hebrew word is the same as one of the Hebrew words for “sin” (Lev. 4:3, 14) and the sacrifice expiated for certain kinds of sins, prerequisite to divine forgiveness (4:20, 26, 31, 35). However, burnt and reparation offerings also expiated for sins, so in this sense they too could be called “sin offerings.” Moreover, the purification offering could purify Israelites from serious physical ritual impurities, which were not sinful acts and reflected no devaluation of ontological (pertaining to basic “being”) or moral worth. Men or women who received this kind of expiation needed no forgiveness (e.g., 12:6-8; 14:19; 15:15, 30). So instead of “sin offering,” it is better to call the ritual “purification offering,” referring to the fact that it effected purification from sins (moral faults) and physical ritual impurities. To further support this rendering, a verb from the same root as the noun for “purification offering” means “purify” (Lev. 8:15).

So-called “sin” offerings remedied impurities that could be incurred through automatic physical processes, such as nocturnal emission and menstruation (Lev. 15:16-17, 19-24). This has been misunderstood to mean that sins are automatic, which they are not (cf. James 4:17). Sins involve choice; they are not involuntarily happening all the time like breathing. The rendering “purification offering” avoids such confusion between sins and physical impurities.

Leviticus 4 prescribes two basic kinds of purification offerings for inadvertent violations of divine commands in descending order of severity from sins with communal impact committed by the high priest (vv. 3-12; perhaps including sins by ordinary priests who belonged to his household; cf. 10:19; 16:6, 11) or the entire community (4:13-21) to sins that impacted individuals committed by chieftains or ordinary Israelites (vv. 22-35). Communal sins required the high priest to enter the outer apartment of the tabernacle and sprinkle the blood of a bull seven times in the area of the “holy place” that was “in front of the (inner) veil” (vv. 6, 17) and then to move closer to the ark and daub blood on the horns of the incense altar (vv. 7, 18). In this way, he moved horizontally toward the presence of YHWH, who was enthroned above the cherubim on the ark of the covenant in the holy of holies (e.g., Exod. 25:22; 1 Sam. 4:4). Individual sins (not including the sin of a high priest, which affected the whole community; cf. Lev. 4:3) required a priest to daub blood on the horns of the outer altar in the courtyard (vv. 25, 30, 34).

A priest was required to eat the meat of a purification offering that he officiated for someone else (Lev. 6:26, 29 [Hebrew vv. 19, 22]) in order to bear the culpability of that person or group (10:17-18), thereby representing the role of God, who bears sins when He forgives (Exod. 34:7—literally “bearing iniquity and transgression and sin”). However, when a priest offered a sacrifice for his own sin or that of the community to which he belonged, in which case the blood was applied inside the tabernacle (Lev. 4:6-7, 17-18), he was not permitted to eat the meat, which had to be incinerated (6:30 [Hebrew v. 23]). This makes sense because a person should not receive benefit from his own (in this case token) payment of debt.

Both the Israelite sacrificial victims and priests typified Christ (Heb. 7-10), but there are some significant differences between the type (symbol) and the antitype (reality) to which it pointed. First, Christ did not sin (4:15; 7:28). So the animal sacrifices on behalf of priests when they sinned (cf. 5:3; 7:27-28) had no antitype. Second, when Aaronic priests bore culpability/punishability on behalf of others (Lev. 10:17), those priests did not suffer the punishment as a consequence. But Christ’s Melchizedek priesthood is based on the fact that He not only bore human sins as the ultimate Priestly Mediator, but died for those sins as the sacrificial Victim (Heb. 7:27; 9:11-14, 25-26; 10:5-14). This proves that Christ died as our Substitute.

Priests tossed blood of burnt, well-being (or “peace”), and reparation offerings on the outer altar (e.g., Lev. 1:5; 3:2; 7:2). Application of blood to the altar represented God’s gift of ransom (commonly rendered “atonement”) for the life of the offerer (17:11). Purification offerings were unique in that the priest daubed the blood on the horns of the altar of incense (4:7, 18—communal) or of the outer altar (vv. 25, 30, 34—individual). The horns of an altar (projections from the tops of the four corners) were its highest, most prominent parts. So purification offerings emphasized blood ransom for life. The fact that animal sacrifices provided (token) ransom for human life was reinforced by the location of the permanent temple, according to 2 Chronicles 3:1: on Mt. Moriah, where Abraham offered a ram instead of his son (Gen 22:13), the same place where David offered a sacrifice to avert a deadly plague at the threshing-floor of Ornan/Araunah (1 Chron 21:26-22:1; cf. 2 Sam. 24:24-25).

The goal of a purification offering is stated, for example, in Leviticus 4:26 (case of the chieftain): “Thus the priest shall make expiation on his behalf from his sin and he shall be forgiven” (my translation). The words “make expiation” here translate the Hebrew verb kipper, which is commonly rendered “make atonement.” However, the English word “atonement” was coined from “at-one-ment,” i.e., “(re)-integration” of a relationship, which therefore means “reconciliation.” Forgiveness is certainly a key part of the reconciliation process, but in Leviticus 4:26 it is implicitly given directly by God (divine passive) afterthe priest performs kipper, which refers to him removing/expiating the sin from the sinner (“from his sin”) by performing the ritual. Therefore, kipper does not cover the process of atonement as a whole; rather, it is removal of an impediment to the divine/human relationship, prerequisite to completion of atonement/reconciliation by divine forgiveness.

No human priest could ever forgive sin as God does, for which there was a unique Hebrew word (root slḥ). For a mere human to pronounce such forgiveness is blasphemy (Mk. 2:5-7), but Jesus could do this because He is divine and could give the healing transformation that only God’s creative power can provide (vv. 8-12; cf. Ps. 51:10 [Hebrew v. 12]; Ellen G. White, Thoughts from the Mount of Blessing, 114).

Reinforcing the two-stage movement of sins into the sanctuary throughout the year and out of it on the Day of Atonement was a reversal in the order of blood applications in its outer apartment. In the purification offerings of the high priest or the whole community, the high priest sprinkled blood in the area “in front of the veil” and then, moving toward the ark, he daubed blood on the horns of the incense altar (Lev. 4:6-7, 17-18). By contrast, the movement of blood applications on the Day of Atonement was from the inside out, like a house-cleaning job (16:14-19; cf. Exod. 30:10 on purgation of the incense altar).

The sanctuary where God was enthroned represented His administration and holy character, which is love (1 Jn. 4:8). The fact that love includes justice as well as mercy (cf. Ps. 85:10 [Hebrew v. 11]) is the reason for the sacrifice of His Son, which the animal sacrifices prefigured: to enable God to extend full mercy with full justice and thereby maintain the integrity of His character, which holds relationships together throughout His universe. Symbolic “defilement” of the sanctuary throughout the year by sins that God forgave represented the relational reality that He incurred judicial responsibility for forgiving guilty people (cf. 2 Sam. 14:9), which a just judge normally should not do (cf. Deut. 25:1; 1 Ki. 8:32). So there was a need for God to justify the forgiveness that He had already granted, and He did this on the Day of Atonement, when His nominal people were judged by their loyalty or disloyalty (cf. the end-time fulfillment in Dan. 7:9-14, 22; 8:14).